We’ve recently got a chance to see one of the darkest, most ambitious short films so far. Ryan Prows’ Narcocorrido is a 23-minute story of drug trafficking and police corruption near the US-Mexico border, and yet it doesn’t seem half as long. Nerve-wrecking and thrilling, it’s one of those films that you can’t get out of your head for a long time. Even though Prows used it as his thesis film for the American Film Institute Conservatory, the impression Narcocorrido leaves is far from a simple student film. The theme is grim, the problem quite contemporary, the message as sharp and painful as the bullets that fly around with no regard for their targets. People are somehow depersonalized: they are merely pawns in a huge, bloodthirsty board game where there are no winners. Only players who are temporarily ahead, but about to be crushed with the same force they used to crush their opponents. There are no winners whatsoever: just the dead and those who will soon join them.

The film opens by introducing a black police officer, coughing her lungs out while hidden in the dark in what seems to be some sort of a stakeout. Soon a truck drives by, playing loud Mexican music. She wipes her mouth and starts following the vehicle. What happens next is a tense confrontation with the seemingly innocent drivers, but with every second that follows your gut tells you this is definitely not a feel-good romantic feature where the policewoman realizes she wasn’t born to wear the uniform and joins the suspects on their way to a worry-free Mexican polka-ridden life.

Ryan Prows certainly knows how to build suspense. He uses the seemingly jolly music as a background, but when he puts subtitles on, you realize there is absolutely nothing cheerful or positive about the song. Along with the excellent use of music that inspired him to make Narcocorrido in the first place, he works well with the talented lead actress and her supporting cast, making the viewer feel as involved as possible. The action is realistic, not overwhelming, somehow contained but very efficient. There is nothing glorified about what occurs on this desolate road, and Prows makes sure you know it.

Hauntingly brutal, yet simple and straightforward, Narcocorrido is a finely made short film that makes the absolute best of its resources thanks to the talent both behind and in front of the camera. Keep up the great work, Mr. Prows. 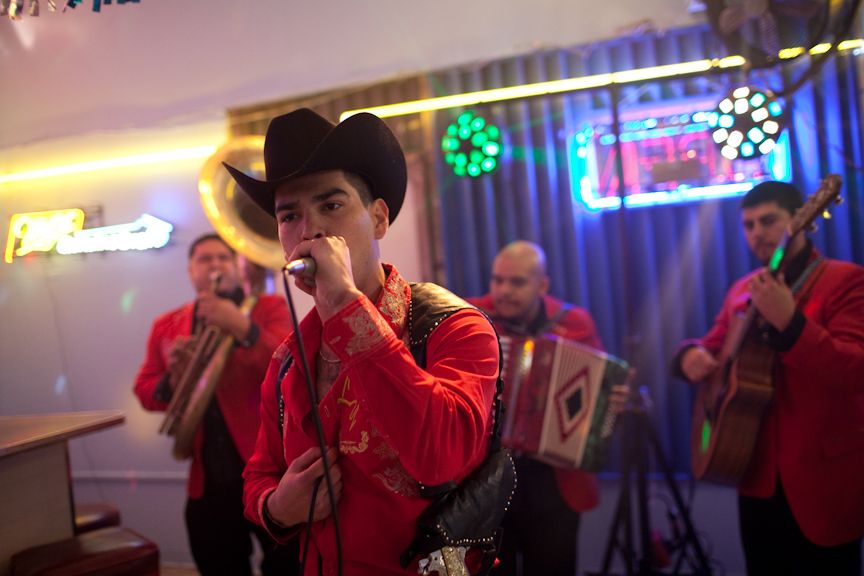 Why did you make the film?
I love crime fiction. Always been drawn to it, so Narcocorrido was my attempt at the genre I grew up devouring. Books, comics, movies, music—all the many subgenres of it. Whatever. I think I respond to it so well because it’s usually a very short leap for characters to get themselves into believable life or death situations—the whole genre is sort of built on that idea. So it’s very easy to introduce huge stakes and keep raising them as you go. And, honestly, they’re usually about a class of people I’m more interested in following along with. I think that’s why I can barely get through stuff like Rules of the Game. My loss, I know.

I also like when filmmakers mess with the formula and bring their own slant to it, and the movies I love the most probably can attest to that. They usually take the generic staples and twist them with their own unique approach. My feeling is that If you can take these big stakes and put it to some seemingly contrasting topic or theme you want to explore, then you are cooking with gas. The Godfather, Friends of Eddie Coyle, etc.

As far as Narco, I grew up listening to lots of punk and outlaw country and gangsta rap*, and when I stumbled onto narcocorridos I felt like I just got it. These guys were telling their side of the story from the shady end of the street, and the world just felt ripe for a film. I’ve written a feature set in this world as well that goes further into detailing the life of these corridistas that I hope to be able to make with the team from the short. These troubadours work directly for the cartels and usually end up getting pulled into the horrific violence of that lifestyle hanging with those dudes and singing songs of their exploits. It’s a real “kill the messenger” sort of deal going where rival cartel guys will attack them for glorifying their enemies.

So, with the short film, I felt like we had a great way in to telling a story about the drug wars without having to talk directly about the drug wars. I try to maintain a no soapboxing approach to my filmmaking, and this felt like a way to discuss issues and give some perspective to the music and the situation at large without lecturing. A beautiful tradition of folk ballads wrapped up in this nightmarish world of insane violence that’s tragically still happening in the modern world today? What’s not to like?!

Why do you want to be a filmmaker?
That one’s easy. I’ve never wanted to do anything else. Grew up loving stories in all forms: History, Southern-type oral traditions and tons of family anecdotes, movies, music, books—it was absolutely never going to go any other way.

What inspires you?
Beyond fiction or narrative works, I really like to watch a lot of docs and read a ton of non-fiction. Articles. News stories. First-person accounts. Things like that. I try and get inspired by as much real life stuff as I can. I’ve also found myself drawing more and more on my own life and experiences. Not necessarily direct stories from it, but little wrinkles that help flesh out a character or anecdotal bits I like to write down to remember to use for later. My friends and family have become an endless source, it seems. I’ve been finding this stuff is great to build on and it will always inspire me to say “But what if it went this way…” as a starting point for a story or for a way to further try and bring the characters to life.

I’m also a big photography fan. Collect a ton of images on a daily basis, and anytime I’m starting a new project or pitching something, I find it really helpful to put a lookbook together to get everyone on the same page. In doing that, it also helps me start getting to the core of why I want to tell a particular story and what I want to try and achieve technically, artistically, and thematically with that initial kernel of an idea. Images always seem to help me in cutting away the clutter of a story, which is probably why I’m a filmmaker in the first place.

And I love the books of Cormac McCarthy, Eddie Bunker, Robert B. Parker, Alan Moore, Garth Ennis, David Lapham, F.X. Toole, and Ed Brubaker. I steal a lot from comics, honestly, because I feel like with the medium change I really am adapting it into my own thing. And because, who the hell is ever going to know? Even with the comic movies killing it, they still seem like some dirty little secret. I’ve never understood that. 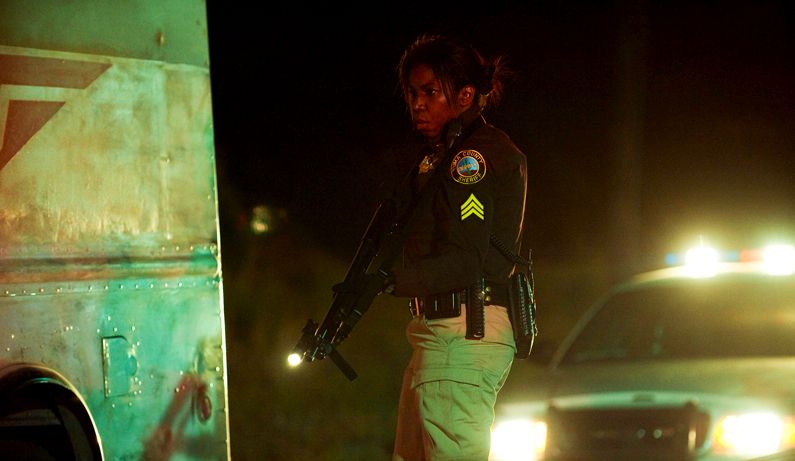 Who are your cinematic role models, if any?
John Cassavetes—The Killing of a Chinese Bookie is top five for me. Also love A Woman Under the Influence. Nobody has been better at nuanced character work, in my opinion. Plus his approach to tone, the mood of his films, and his casting, pacing, and other filmmaking choices are always exciting. A genius.

McCabe & Mrs. Miller is probably my favorite film. Just above Godfather: Part II in my eyes. One I go back to again and again for inspiration. I like some of Altman’s other stuff okay, but this film stands so far above the rest (hell, most other films in general) that I’ve got to mention it. In that vein, I really like The Assassination of Jesse James, The Proposition, and There Will Be Blood for more of that sort of vibe in modern works. But yeah, taking a Western and turning it into that… it truly staggers me and always serves as a creative wellspring to draw from.

Michael Mann—Heat (obviously this is a big one if you see my short). Insider. Thief. A lot of great right there. As far as other films we referenced in making Narcocorrido: First Blood, The Way of the Gun, No Country for Old Men, and that scene in Deer Hunter for how to construct and build on an insane amount of tension.

John Boorman—Point Blank was revelatory when I first watched. I’d read a couple of the Stark books beforehand, but was in no way prepared for the film. That was really exciting to me. Grew up with Excalibur (“FATHER!”). And the tone of Deliverance is something I feel like I’m always reaching for in my own work.

Lumet, Scorsese, Peckinpah—been on a Pat Garrett & Billy the Kid kick lately. PTA—think I actually saw this on C&B, but it’s stuck with me since I heard him talking about how important it is for him to write what he directs as that’s his only “real” discussion he gets to have with the actors. That he can get away with telling them things on the page that he could never say to them on set because it’d actually hinder rather than help. I’ve found that’s exactly right in my experience.

Francis Ford Coppola, George Roy Hill. Fincher. Good lord how I love The Searchers, so definitely John Ford. I don’t know, so many. Gaspar Noe’s work scares the hell out of me and has served as that little cinematic kick in the ass that says: “Hey look, you can push further. It’s okay little bird, don’t be scared.” Really liked A Prophet. Animal Kingdom. 4 Months, 3 Weeks, and 2 Days. Twentynine Palms. Just saw Breaking the Waves for the first time the other day and it destroyed me. So, films that push the line aesthetically and dramatically, even if I don’t initially love it or have fun watching them, become they become something that informs my filmmaking once I can’t get them out of my head.

I was mentored by the mighty Frank Pierson, so I’d be remiss without talking about what a beast he was. His approach to storytelling has definitely been a huge influence on my own, and he was just so no bullshit in cutting to the heart of the matter and pushing you to figure out how to do something better with less—it was pretty miraculous. He also nicknamed me ‘Killer Prows’ in school, so that’s a career high right there!

And finally, I’ve just got to reiterate that C&B is truly doing the Lord’s work. I can’t stop poring over the articles and commentaries and screenplays and the other many many gems you guys dig up. Thank you again for running such an invaluable resource! —Ryan Prows, Writer/Director

Ryan Prows is a Filmmaker, a Southerner, and a Gentleman of the highest caliber. He received an MFA in Directing from the American Film Institute Conservatory and won a Student Academy Award for his film Narcocorrido. Ryan is also a founding member of the comedy collective Tomm Fondle, recently writing and directing the 15 episode web series Boomerang Kids, as well as various sketches for the group. Tomm Fondle has produced several viral videos and the team continues to work on material for television and the web.

Ryan is represented by Jason Burns and Emerson Davis at UTA and resides in Los Angeles with his wife, a foppish dandy of a dog, and an alright cat. 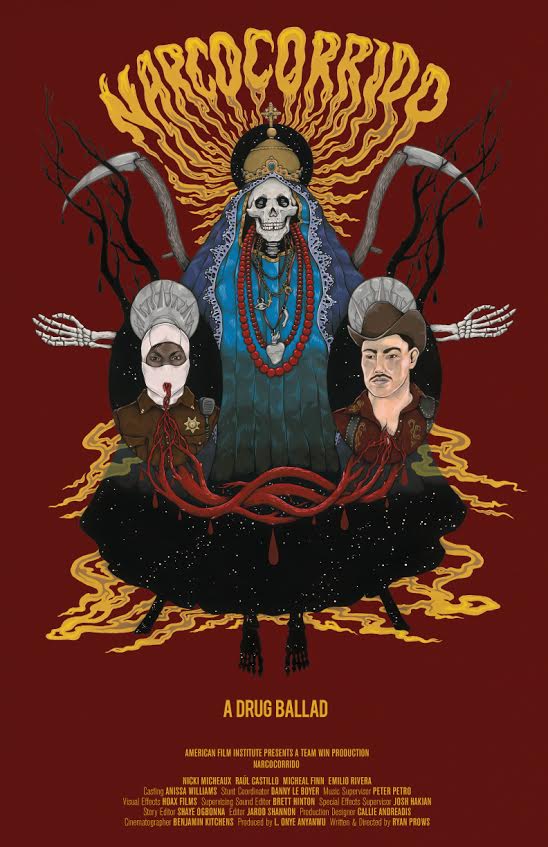