A very rare piece, this has never been re-broadcast—Will The Real Mr. Sellers Please Stand Up (1969). Behind the scenes interviews with Peter Sellers during the making of The Magic Christian, “including appearances by Ringo, Paul and Linda, and John. The documentary was never repeated by the BBC, possibly due to the fact that Peter Sellers thought he came across as depressed. Spike Milligan narrates and dissects Peter’s persona in the process. A word of warning: The documentary includes strong scenes (bullfight, open heart surgery, nudity) and language. Peter Sellers lived for 11 more years after this documentary. On 22 July 1980 Sellers collapsed from a massive heart attack in his Dorchester Hotel room and fell into a coma. He died in a London hospital just after midnight on 24 July, aged 54.”

Peter Sellers was one of the greatest mimics, character actors and comedians who ever breathed. I once saw him being interviewed on location in France—and an old Frenchman wandered past, grumbling to himself—and Peter suddenly broke off what he was saying and did a PERFECT imitation of the old geezer. Whether it was in cod-French or actual French I do not recall—but I remember the intonation was PERFECT. But like all great actors, Sellers was a bundle of nerves, paranoia—and was a LOUSY CHAT-SHOW guest. However, Michael Parkinson did not know that until in 1974, Peter was booked as a guest on his show. The man turned up—but as they were being made up, he suddenly turned to Parky and said, “I can’t go on.” “What?” said the Yorkshireman. “I can’t do this. I’m an actor. I NEVER go on as ME.” “Look,” said Parky, “You’ve GOT to go on. The studio is ready—the audience is ready and I’M ready. We’ve advertised your appearance—and anyway, it’s too late to find a replacement.” “But I do FILMS, not stage.” “What about The Goons? You were on stage then.” “Yeah, but I was with  Harry and Spike. And I was playing CHARACTERS—loads of them. I can’t DO ME.” 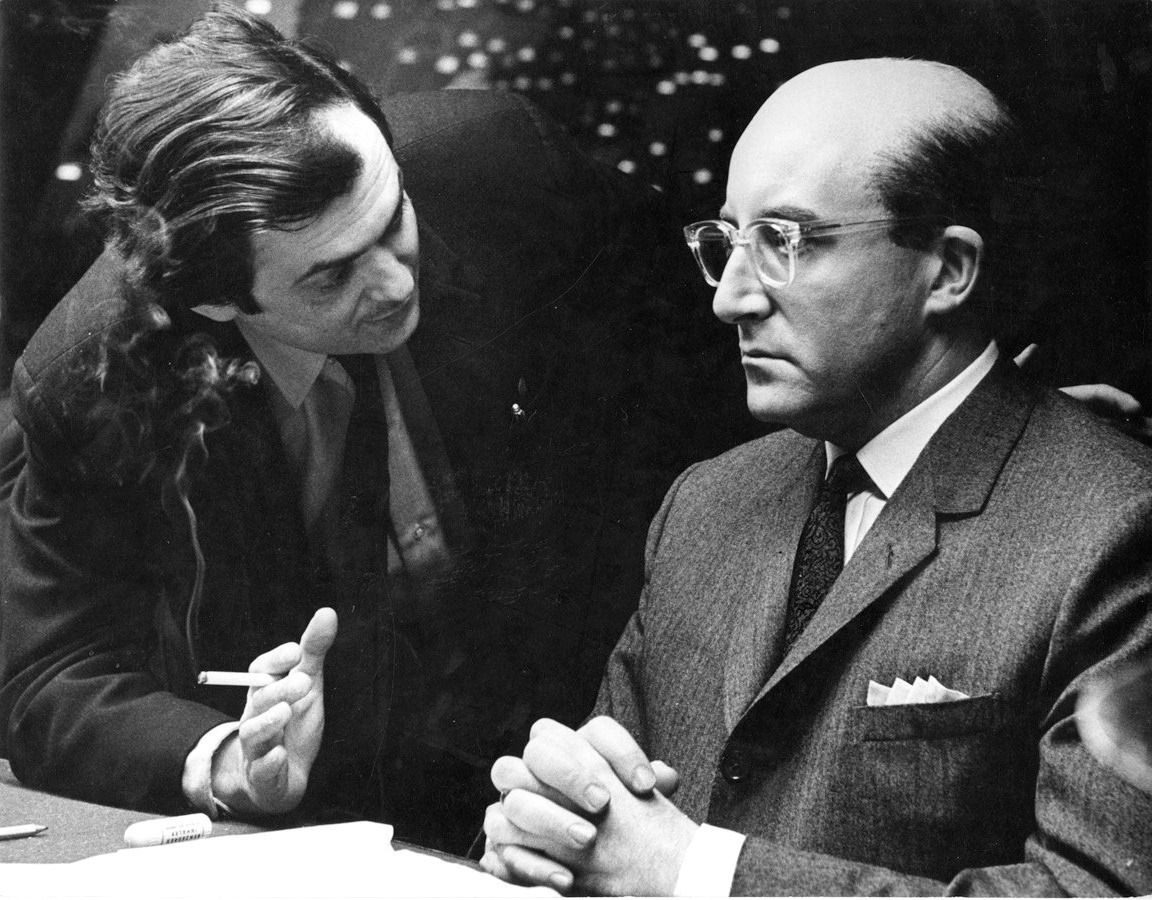 At this point, Parky went ballistic. He always had a Yorkshireman’s temper—the audience would see a flash of it when later, Sellers would refer to his Dad as a “right” Yorkshireman (and  if you want to see Parky REALLY throwing a strop, click on.) Anyhoo, Parky said, “Look—I don’t care WHO you come on as—just so long as you COME ON.” So a production assistant took Peter to the BBC Wardrobe Department, while Parky went to start the show. Finally, someone gave him the nod that Sellers was ready and he introduced him, not knowing WHAT to expect. What he got was Sellers—dressed in a leather greatcoat and a WW2 German “squarehead” helmet (which always got a laugh in post-war Britain). Parky himself fell about laughing—as much in relief that he now had a show, as at the apparition that had presented itself. Peter goose-stepped around and improvised a character for a bit. Then, when he felt more at ease, threw the gear off and gave a GREAT interview. After this show, Peter only ever gave one more long interview. In that one, he told his anecdote about Michael Caine. It was the one where he said that he had seen Michael telling everyone  at a party who would listen various fun-factoids from The Guinness Book Of Records—and  had ended his stories with “Not a lot of people know that”—doing a perfect impression of Caine. And for years, this became a catch-phrase that haunted Mike Caine—until it got supplanted, latterly, by “You were only supposed to blow the bloody DOORS off,” from The Italian Job (like “No, Mr Bond… I expect you to DIE,” from Goldfinger—it took TIME to catch on). Mike even gave his name to a fun-factoid book CALLED “Not A Lot Of People Know That”—with his likeness on the cover—the proceeds of which were for CHARITY. And it is an  indication of the legendary generosity of Mr Caine that it was not until after Peter’s death that Mike let the TRUTH out. He had never SAID the phrase. The whole story was BOGUS! Sellers had wanted to do his impression of Caine, but had no anecdote to hang it on. So, not considering that it wasn’t exactly complementary to his fellow actor, Sellers just MADE ONE UP on the spot. But knowing the truth would hurt Peter, Mike had let it lie. Only after Sellers had passed, did  he come clean. —The World According To Damien

Here’s the full version of the interview for your viewing pleasure:

He’s the hardest worker I know. I’d come into the [Dr. Strangelove] studio at seven o’clock in the morning and there would be Peter Sellers. Waiting, ready. Full of ideas. When you are inspired and professionally accomplished as Peter, the only limit to the importance of your work is your willingness to take chances. I believe Peter will take the most incredible chances with a characterization, and he is receptive to comic ideas most of his contemporaries would think unfunny and meaningless. This has, in my view, made his best work absolutely unique and important. […] He has the ability to go into the area where it’s like a dream. He can go into surrealism and keep his other leg in reality. He can do things which are not real—for instance, it’s almost inconceivable that anybody could behave as Strangelove does in the last scene, with the hand. I suppose even a psychotic personality wouldn’t really behave that way. But it’s something somebody might do in a dream. —Stanley Kubrick

Attention, dear readers: If you find Cinephilia & Beyond useful and inspiring, please consider making a small donation to keep it going