Today’s film industry, according to countless filmlovers around the globe, needs intrinsic changes to occur in order for Hollywood to shine again in all of its glory. Studios hold a desperate grip on projects that bring profit, often ignoring talented artists and original ideas in favor of tested audience-attracting franchises that go on and on with little or no cinematic value. And in this time of desired change we’re extremely happy to point out that Gary Young’s The New Cinema documentary, made sometime in the late 1960s (date still remaining unknown), appeared on the Internet to shed some light on the old Hollywood and then up-and-coming filmmaking forces such as George Lucas, Francis Ford Coppola and Roman Polanski. This documentary, which never aired on TV, is a gem to behold, historically fascinating and once again as contemporary as it can be. Enjoy the trip back to the late sixties—we certainly have.

Between the French La Nouvelle Vague and the Italian Neorealismo, Europe had been undergoing a continuous cinema transformation since the 1950s, while the ailing American studio system groaned under its own weight and inertia. New Hollywood had arrived with Bonnie and Clyde in 1967, and already by 1968 it was changing how Hollywood thought and acted. The student film scene was getting ready to explode, and it knew it. The details on when this documentary, The New Cinema, were made are a little vague. IMDb lists it as 1968, but it contains clips from Easy Rider, which was released in 1969. It’s possible it had early access, especially given the inclusion of interviews with Peter Fonda; but regardless it did a remarkable job of getting on camera a wide number of the people who would help transform cinema over the course of the following decades including Dustin Hoffman, Roman Polanski and Sharon Tate and Andy Warhol and most interesting to us, Francis Ford Coppola and George Lucas.

The film was directed by Gary Young, who is also credited as the Second Unit Director on 1:42.08. Information about Gary Young is scarce beyond what IMDb lists, which is scarce in itself. Given that he worked on 1:42.08, it’s not unreasonable to think that he was perhaps in Lucas’ class, but I’ve so far been unable to get a hold of a list of students from that class (beyond the famous ones). However, he was Assistant Cameraman on Monte Hellman’s Ride in the Whirlwind (1966), although that doesn’t preclude him also attending USC. If anyone knows more, I’d love to know, as he seems to subsequently have mostly vanished from the film scene, holding only one other credit on IMDb. Also remarkably, it was edited by Paul Golding (who first posted it on his YouTube account), another classmate of Lucas’s, who also worked with Lucas on several student films (including The Emperor and his own Wipeout, with Lucas, which bears a striking resemblance to Lucas’s Look at Life) while they were both at USC.

According to the description on YouTube it apparently never aired on TV, but certainly provides a fascinating look into the (slightly self-obsessed) young filmmakers of the late 60s, and along with Gene Youngblood’s 1971 interview with George Lucas it provides a fantastic look into Lucas’s early career and early determination to rebel against the prevailing forces of Hollywood. I believe part of this film was used in Peter Biskind’s somewhat gossipy, but nevertheless must-see documentary version of Easy Riders, Raging Bull (2003). Skip to about 10 minutes into the first part to get to the Coppola/Lucas bit. —Michael Heilemann

THE WHOLE CRAZY, QUIXOTIC COPPOLA/AMERICAN ZOETROPE EXPERIENCE IS SO IMPORTANT FOR FILM GEEKS TO LEARN ABOUT 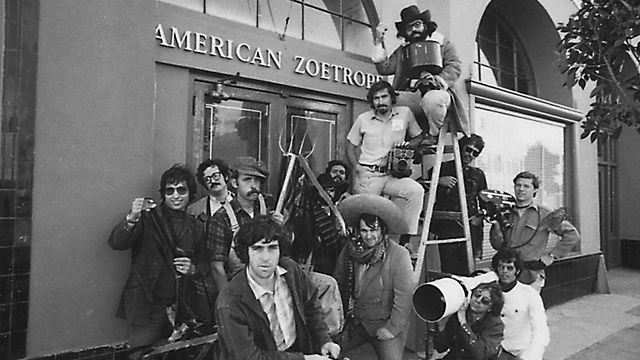 Also recommended viewing: a fascinating chronicle of the birth and rise of the radically different independent studio founded by director Francis Ford Coppola. A Legacy of Filmmakers: The Early Years of American Zoetrope, narrated by Richard Dreyfuss, covers the rise and fall of the struggling young studio during the late 1960s and early 1970s, touching on everything from the influence of Easy Rider to the bitter clash between Warner Bros. and American Zoetrope over the film itself. Among other highlights, A Legacy of Filmmakers features short interviews with the likes of Martin Scorsese, Steven Spielberg, and Francis Ford Coppola.