The last script that Akira Kurosawa, the undisputed icon of Japanese filmmaking, wrote before his death in 1998 was his adaptation of Edgar Allan Poe’s ‘The Masque of the Red Death.’ Kurosawa began writing the script for The Masque of Black Death after his 1975 film Dersu Uzala, and just like with Dersu Uzala the story was supposed to take place in Russia. At the beginning of the 20th century humanity is faced with a deadly contagion, and people’s characters, resilience and survival are being tested as the society is pushed well into the brinks of despair and possible annihilation. Edgar Allan Poe’s original story is a mid-19th century take on the inevitability of death, as we follow a prince eager to avoid an outbreak of a deadly disease that has swept over his land by hiding behind the seemingly safe walls of his castle. The prince and his noblemen ignore the sufferings of the people around their fort, determined to wait for the plague to perish all the while having a jolly good time. Things change for the worse when one of the guests at their masquerade turns out to be Red Death itself. Poe’s story has been adapted in several forms, but the first thing that comes to our mind is the 1964 film with Vincent Price. 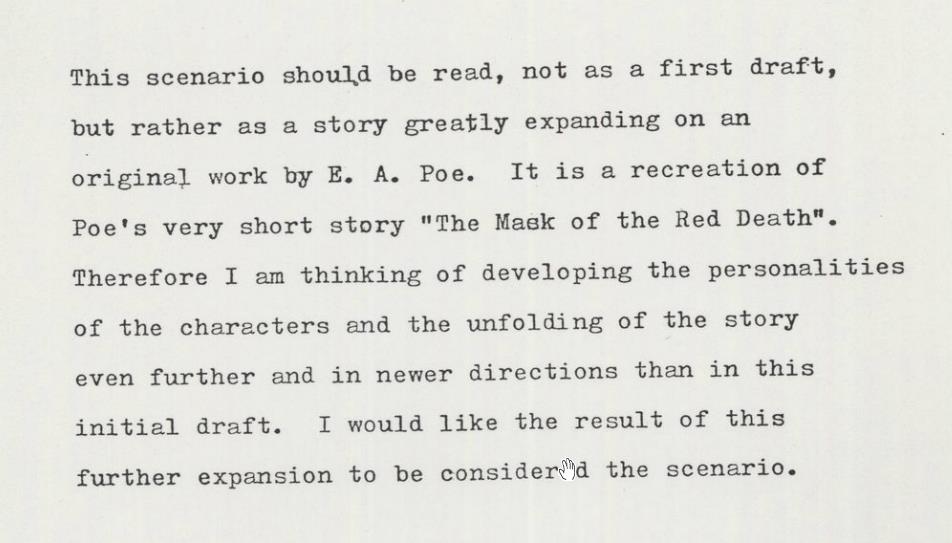 Just like it was with Ran, Kagemusha and Red Beard, this script was born as a collaborative effort from Kurosawa and Masato Ide. Kurosawa and his son, executive producer Hisao, initially planned for the film to be made in 1998, which is why the producers spent the previous year securing finances and looking for a director in Europe and the United States. This happens to be Kurosawa’s first co-written screenplay that the master himself would not direct himself. The project was put on hold when the 88-year-old legend succumbed to a stroke, having been strapped to a wheelchair for the last couple of years of his life. The Masque of Black Death, therefore, never saw the light of day, but thankfully, the wonderful screenplay has emerged online over the years and stands here as a testament to Kurosawa’s unprecedented gift, a razor-sharp mind creative and imaginative even at the point when the rest of the body started to wither. Thanks to the following sources: Akira Kurosawa info, Akira Kurosawa Digital Archive.