Luis Buñuel was born exactly 121 years ago today. A prolific filmmaker whose work spanned over three continents and half a century, Buñuel is universally considered as the definition of a visionary artist who influenced and inspired generations of filmmakers and film lovers alike. The Spanish-born director always had a keen interest for expressing himself through images, but it was the screening of Fritz Lang’s Der müde Tod that opened his eyes, making him realize what his destined path really was. “I decided to devote myself to the cinema,” he stated, and what followed was fifty years of creation in almost all film genres, but always marked by the unmistakable style which made it impossible for a careful viewer to a mistake a Buñuel film for the work of any other filmmaker. The first director to be officially welcomed among the Surrealists by their leader Andre Breton, Buñuel is probably the first thought that comes to mind when surrealism in this particular medium is discussed. What marks the majority of Buñuel’s movies is the distinct criticism of bourgeois morals and hypocrisy, as well as accentuated disapproval of the ethics and policies of organized religion, with special emphasis on the Roman Catholic Church. Just like the work of Fritz Lang opened a new door to his creativity and natural inclination for artistic expression, Buñuel’s work served as an inspiration and initiation for numerous distinguished cinematic authors of the decades that followed. Guillermo del Toro, for instance, hailed Buñuel’s The Young and the Damned as one of a handful of movies that, in his formative years, left him no choice but to pursue a filmmaking career. Those interested in Buñuel might have already come across the superb 1983 documentary we wish to present you today.

The award-winning British documentarist Anthony Wall, whose interests ranged from heavy metal through comic books to Dali, Philip K. Dick and Bob Marley, made a stunning exploration of Buñuel’s life and career entitled The Life and Times of Don Luis Buñuel. Premiering a year after Buñuel’s death in 1983, Wall combined archive footage with precious commentaries from the people who knew Buñuel and worked with him, like Catherine Deneuve, Jeanne Moreau, Jean-Claude Carriere, Carlos Fuentes and Fernando Rey. Further embellished by the analyses and insights of numerous Buñuel scholars, The Life and Times of Don Luis Buñuel is a fascinating look into the mind and world of one of the most celebrated film authors of the past century, and as such serves as the perfect companion to Buñuel’s highly rated autobiography ‘My Last Sigh.’ This is a must-see.

LUIS BUÑUEL: A FILMMAKER OF OUR TIME

In 1964, film critic and filmmaker André S. Labarthe, together with Janine Bazin, widow of influential film theorist André Bazin, approached the French television channel ORTF about starting a program that would resemble the long, in-depth interviews with film directors that magazines such as Cahiers du cinéma and Positif regularly published. ORTF gave the green light, and Cinéastes de notre temps (Filmmakers of Our Time) was born. Many of the programs were dedicated to older directors, then in retirement or in the final stages of their careers. Instead of TV journalists, Labarthe and Bazin would often ask well-known film directors to make these programs: thus, Jacques Rivette on Jean Renoir, or Jacques Rozier on Jean Vigo.

Cinéastes de notre temps lasted until 1971, when ORTF, for various clear and unclear reasons, decided to terminate production. Over the following years, the series became almost legendary, with occasional bits of its programs appearing in other films. In 1988, ARTE, the French-German cultural channel, decided to reprise the series, now under the title Cinéma, de notre temps. The focus shifted to contemporary filmmakers, and generally speaking directors were now more free to choose their own approaches—such as the self-portrait by Chantal Akerman or the film noir style of Rafi Pitts’ film on Abel Ferrara. The films made for both Cinéastes and Cinéma, de notre temps together form an invaluable history of the cinema, full of insights into the work of individual filmmakers as well as a sense of the shifts in taste and ideas about cinema.

For what would be the series’ inaugural episode, it was decided the subject should be Buñuel, the old surrealist master recently returned to Europe to make Diary of a Chambermaid. Buñuel travels to Spain, where he visits Toledo, talks of old times with Garcia Lorca and Dali, and retraces the trip through Las Hurdes recounted in his film Land without Bread. —The Film Society of Lincoln Center 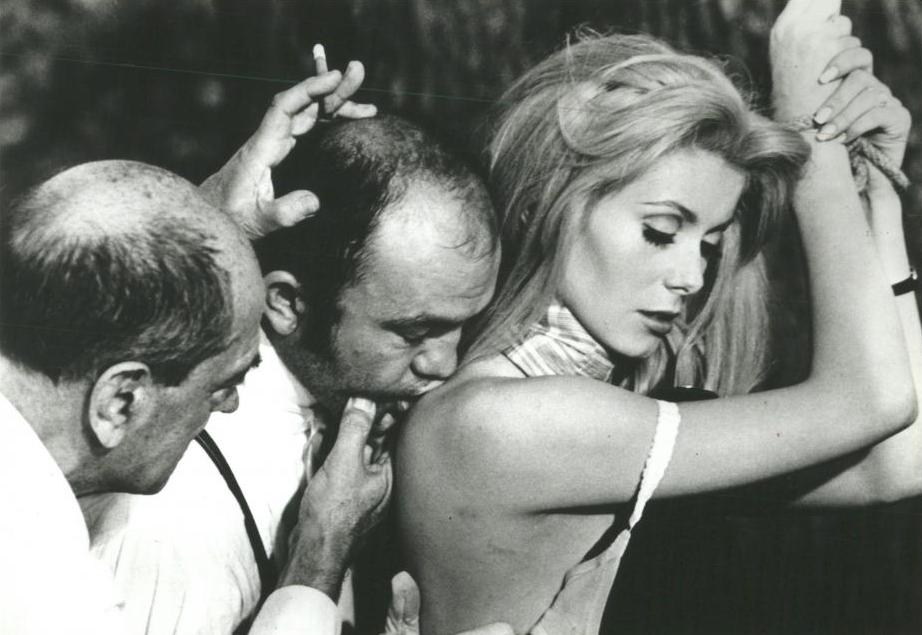 1. Don’t Give Too Much Away

Before the screening of The Exerminating Angel in Cannes: Buñuel announced, “If the film you’re about to see seems enigmatic or incongruous, life is that way too.”

2. Begin With Horror, Or Attract Attention By Shock

Ricardo Urgoiti met Buñuel at the premiere of Un Chien Andalou. “At that time, the audience thought it was a terrifying film, especially the scene where the razor cuts through the eye,” he says. “Everyone was terrified, they didn’t understand the film. Nevertheless, it was a great success. At the end of the film, someone said, ‘What does all this mean? We don’t understand anything!’

He’s a brute, “un bruto” as we say in Spanish! But in fact, he isn’t a brute. He acts this way so we don’t see his true nature. He is actually very soft-hearted. He hides behind this fierce attitude.”

3. Contradictions Are An Artist’s Prerogative (Or The Basis Of His Humor)

“Not really,” answers Spaniard Buñuel. “It’s dirty and the streets are smelly. We Americans like clean places.”

Later that evening, Buñuel says to Valery, “Evenings are very pleasant in Toledo. I will show you tonight.”

“This morning I didn’t, but I’m starting to love it… I can like something in the morning and hate it in the afternoon.”

4. Always Come In Under Budget And On Time

“What kind of films did you make as a producer?” asks Valery.

“Popular films,” is Buñuel’s answer. “I was an executive producer as I knew how cinema worked. My job was to reduce the number of days of production of a film. If they gave me 30 days, I had it done in 25 days. I pushed people to work faster. I was used to working on a tight budget. I attach little importance to appearance. I don’t try to dazzle the audience with compositions, costumes, sets or sceneries. I prefer human relationships… and atmospheres, even though they aren’t as important.”

5. Extinguish Doubt, But Be Careful Of Ignoring It

In explaining the character of Nazarin, Buñuel describes the insidious powers of doubt: “If you fell asleep with a cigarette in bed either it is put out in its own, or your house can catch fire. Doubt is like a cigarette, it either does nothing or destroys everything.”

From Luis Buñuel’s ‘My Last Sigh.’ We highly recommend you to read Buñuel’s self penned autobiography.