It really is to no surprise that Francis Ford Coppola’s The Godfather has managed to transcend the material plane and all those ‘movies you should definitely see’ lists, and entered the realms of the immortals. The glorious 1972 epic story of a fictional New York crime family has become so acclaimed and famous around the filmloving communities around the world that it has entered the American filmmaking mythology. Every single aspect of Coppola’s masterpiece is a filmmaking lesson in and of itself. First of all, the splendid screenplay, based on Mario Puzo’s novel and scripted by Puzo and Coppola together, manages to provide a deep, thoughtful insight into the lives of people you would probably never emotionally relate to in a sympathetic way in real life, but here, their stories become your stories, you find yourself engulfed in their world, you start caring without even knowing it.

The characters are outstandingly developed, full of subtle nuances that make people who they are, and animated with the passionate help from marvelous cast. It seems a bit unusual today that Marlon Brando and Al Pacino’s involvement in the project came only as a result of Coppola’s relentless negotiating with the Paramount studio. He believed in them, he saw what they were capable of doing, and they rewarded his faith and efforts by creating a couple of the most memorable roles of the seventies. They are hardly the only ones—James Caan, John Cazale, Robert Duvall and Diane Keaton, among others, also shine in their brightest colors.

The decision to bring the story to life as a period piece has proved to be a bullseye—the stunning attention to detail combined with Gordon Willis’ grand cinematography and Nino Rota’s now legendary music all contributed to the creation of this classic. It’s a historical curiosity to see a film so lauded throughout the cinema-going community and at the same time so worthy of each praise it received. The Godfather has been instrumental for our filmmaking education, and on a personal level, it’s quite simply one of the reasons why the world of film always seemed so magical to us.

A monumentally important screenplay. Screenwriter must-read: Mario Puzo & Francis Ford Coppola’s screenplay for The Godfather [PDF1, PDF2]. (NOTE: For educational and research purposes only). The DVD/Blu-ray (Coppola Restoration) of the film is available at Amazon and other online retailers. Absolutely our highest recommendation.

Google Books is hosting a digital archive of the first 30 years of New York Magazine (1968 through 1997). Amongst this bewildering wilderness of magazines is a real treasure—an August 21, 1972, article written by Mario Puzo on his experience writing the novel and the screenplay for The Godfather. It’s a great article, too. First, you gotta go here, which will take you to the contents page. In the upper left-hand corner you’ll see the little summary of the Puzo article and above that, you’ll see “page 22.” That’s a link. Click that, and it’ll take you to the article. —Mario Puzo Speaks from the Grave!

Above: an intense page from Coppola’s Godfather Notebook. This is an amazing example of the intensity Francis Ford Coppola once brought to his films.

In 1972, Mario Puzo’s bestselling crime novel The Godfather was brought to the big screen by Paramount Pictures and a young writer-director named Francis Ford Coppola. It became a major critical and commercial success, with the saga of the Corleone family becoming an American epic spanning two additional films. Now let’s take a look back at the Oscar-winning Coppola’s masterpiece, which makes an offer so good that moviegoers still find it impossible to refuse. Featuring highlights from the Margaret Herrick Library and the Academy Film Archive.

Completed by Mario Puzo in August of 1970, the first draft of THE GODFATHER featured a very different introduction to the characters of Kay and Don Vito and Michael Corleone. The final screenplay was written in collaboration with Francis Ford Coppola, and the two would also co-write both sequels.

ON THE SET OF THE GODFATHER

James Caan, Coppola and Al Pacino share a laugh during production of the film in 1972.

Cast as Fredo in the first two GODFATHER films, actor John Cazale also appeared opposite Al Pacino in DOG DAY AFTERNOON and Robert De Niro in THE DEER HUNTER before his untimely death in 1978. He also worked with Coppola on THE CONVERSATION.

This scene index prepared for the production of THE GODFATHER includes a final, dialogue-free scene with Kay (played by Diane Keaton) lighting candles in church after realizing Michael’s true nature. The scene was unused in the final cut of the film.

The cinematographer prepares a shot during the production of THE GODFATHER.

Actor John Marley during the filming of the famous horse head scene in THE GODFATHER.

The American theatrical poster art for THE GODFATHER featured the familiar design seen on the cover of Mario Puzo’s novel, which was published in 1969 by G. P. Putnam’s Sons.

How Marlon Brando joined the cast of The Godfather.

From early on in his legendary career, Marlon Brando used cue cards for his lines, which he felt increased his spontaneity. His lines were printed and placed in his character’s line of sight; stills from the production show that they sometimes required clever placement. In one photo, a cue card is taped on the wall behind a lamp. In another, Robert Duvall is seen holding Brando’s cue cards up to his chest. In the scene above, they are held just beyond the view of the camera. Some thought Brando used the cards out of laziness or an inability to memorize his lines. Once on The Godfather set, Brando was asked why he wanted his lines printed out. “Because I can read them that way,” he said. And that was the end of the cue-card discussion. —40 things you didn’t know about The Godfather

A fascinating article from the March 2009 issue of Vanity Fair describes how The Godfather got made, even though the producers, the real-life Mafia, Frank Sinatra, and Paramount executives all fought against it.

One of the most quoted lines from Puzo’s novel never made it to the screen: “A lawyer with his briefcase can steal more than a hundred men with guns.” Before his death, in 1999, Puzo said in a symposium, “I think the movie business is far more crooked than Vegas, and, I was going to say, than the Mafia.” By the time The Godfather had begun production, Mob lawyers and business operatives were walking down the hallways of Gulf & Western together. Unbeknownst to the moviemakers, Charlie Bluhdorn was even doing business with a shadowy Sicilian named Michele Sindona, a money-launderer and adviser to the Gambino and other Mob families as well as to the Vatican Bank, in Rome (elements that Coppola would use in plotting The Godfather: Part III). In 1970, the year The Godfather began production at Paramount, Bluhdorn made a deal with Sindona that resulted in the mobster’s construction and real-estate company’s owning a major share of the Paramount lot. In 1980, Sindona was convicted on 65 counts, including fraud and perjury. Four years later he was extradited to Italy and found guilty of ordering a murder. In his Milan jail cell, he swallowed—or got fed—a lethal dose of cyanide, the prescription favored by the Mob to silence stool pigeons. The Mob and the moviemakers had been acting in unison all along.

A making of documentary on The Godfather trilogy, featuring interviews with actors and directors including Al Pacino, Marlon Brando, James Caan and Francis Ford Coppola.

In the fall of 2006, Globe reporter Mark Feeney talked with Gordon Willis at his Falmouth home about his life and work. Here is a transcript of his conversation with the acclaimed cinematographer. Great interviewee, great interviewer, one brilliant interview all around. 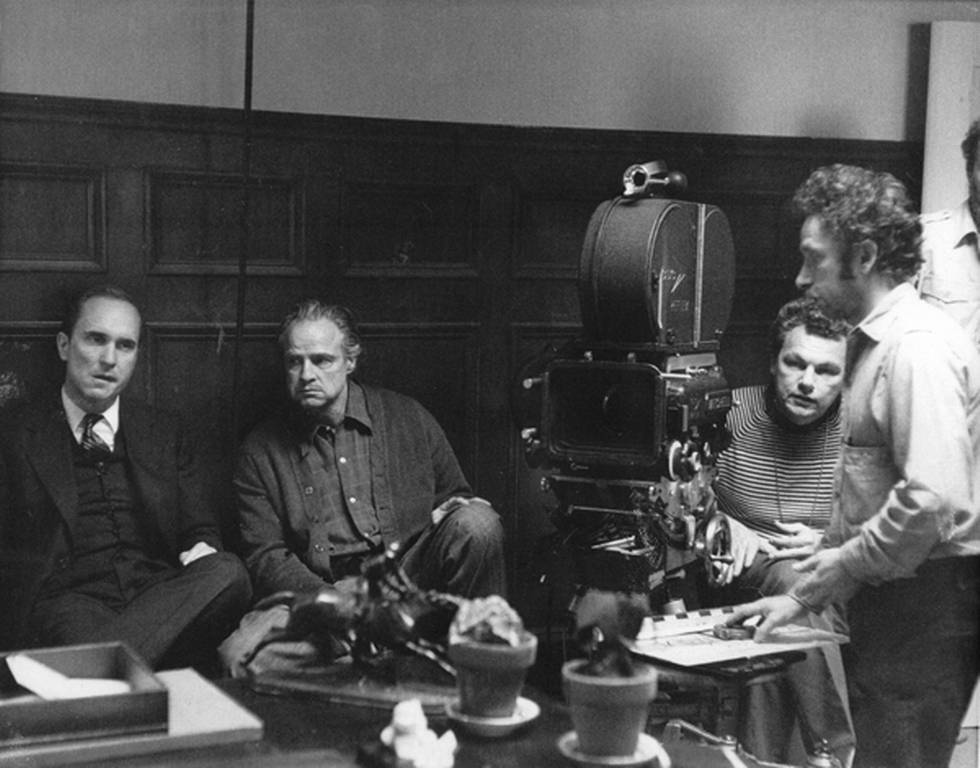 Here are several photos taken behind-the-scenes during production of Francis Ford Coppola’s The Godfather. Photographed by Jack Stager © Paramount Pictures, Alfran Productions. See also: unauthorized photos from the heavily guarded set of The Godfather. Intended for editorial use only. All material for educational and noncommercial purposes only.