The importance of storyboarding is mostly known to everybody who ever tried to make a movie. Whether it helps you visualize the film before a single scene is filmed, or simply assists you in convincing somebody your idea is worth supporting, the value of a storyboard is often immeasurable. Moving Pictures is a television series devoted to film that aired on BBC from 1991 to 1996. It was presented by Rock Follies screenwriter Howard Schuman. Each program was composed of several short films on different cinematic subjects. Although it never achieved high ratings, Moving Pictures was frequently used to teach film studies. Interviewed on the set of Pulp Fiction, Quentin Tarantino told John Travolta it was the best show about movies on television. Here’s the episode devoted to storyboards.

Little seen storyboards for Alfred Hitchcock’s Strangers on a Train, courtesy of Gabriel Hardman. “As far as I know these were drawn by Art Director Ted Haworth. His son Sean Haworth brought them in for me to see when we were working on a film together years ago and I made copies.” 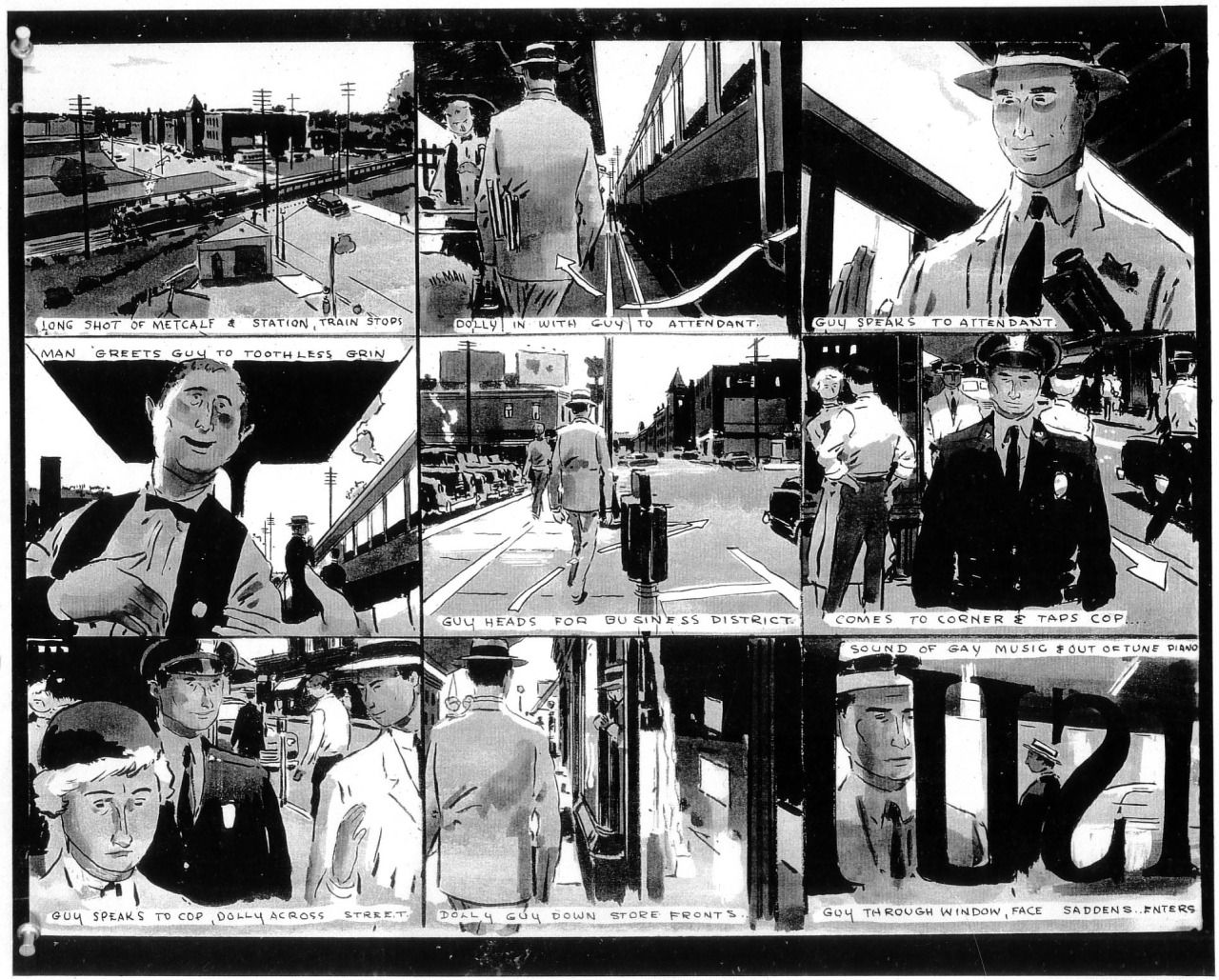 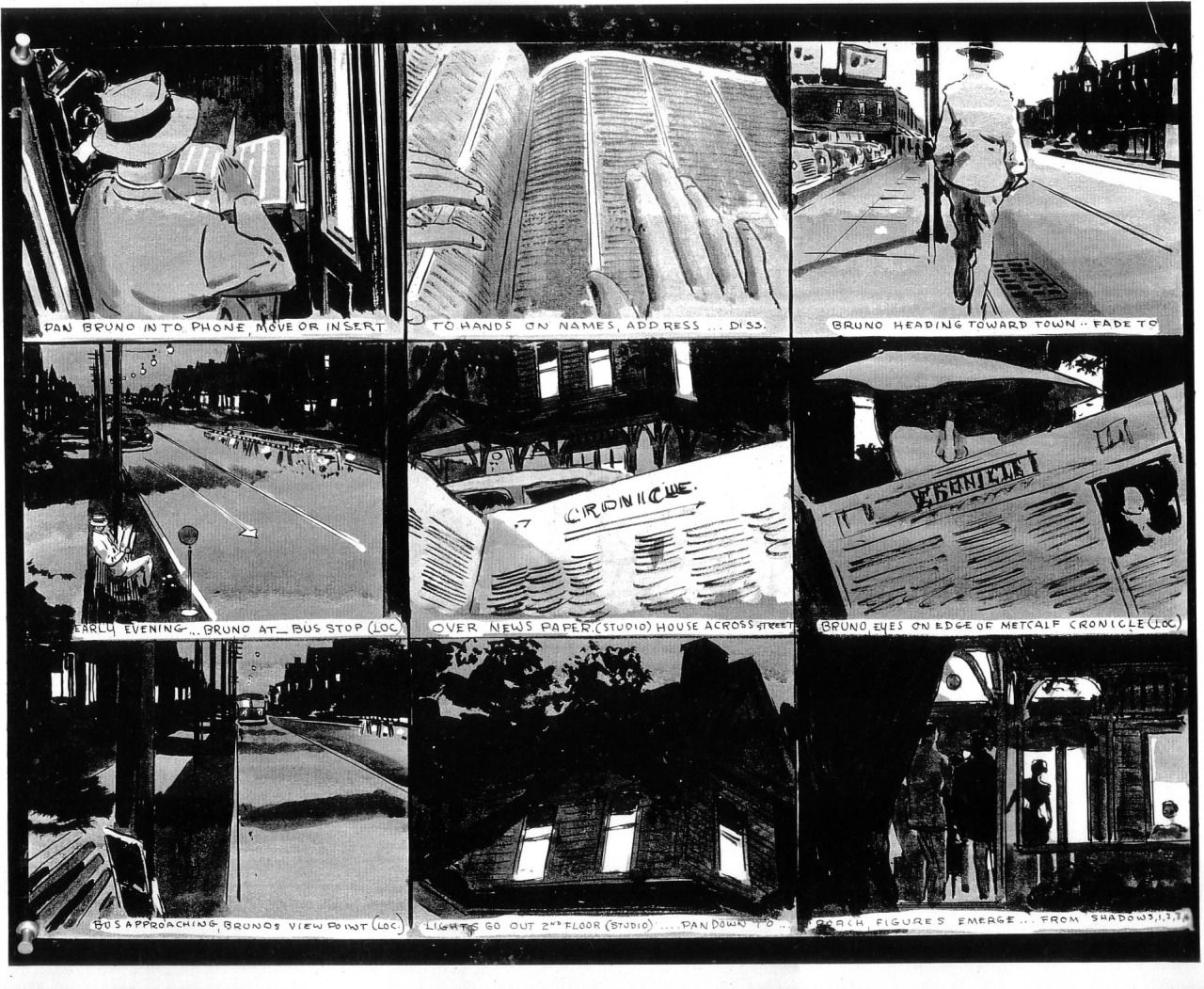 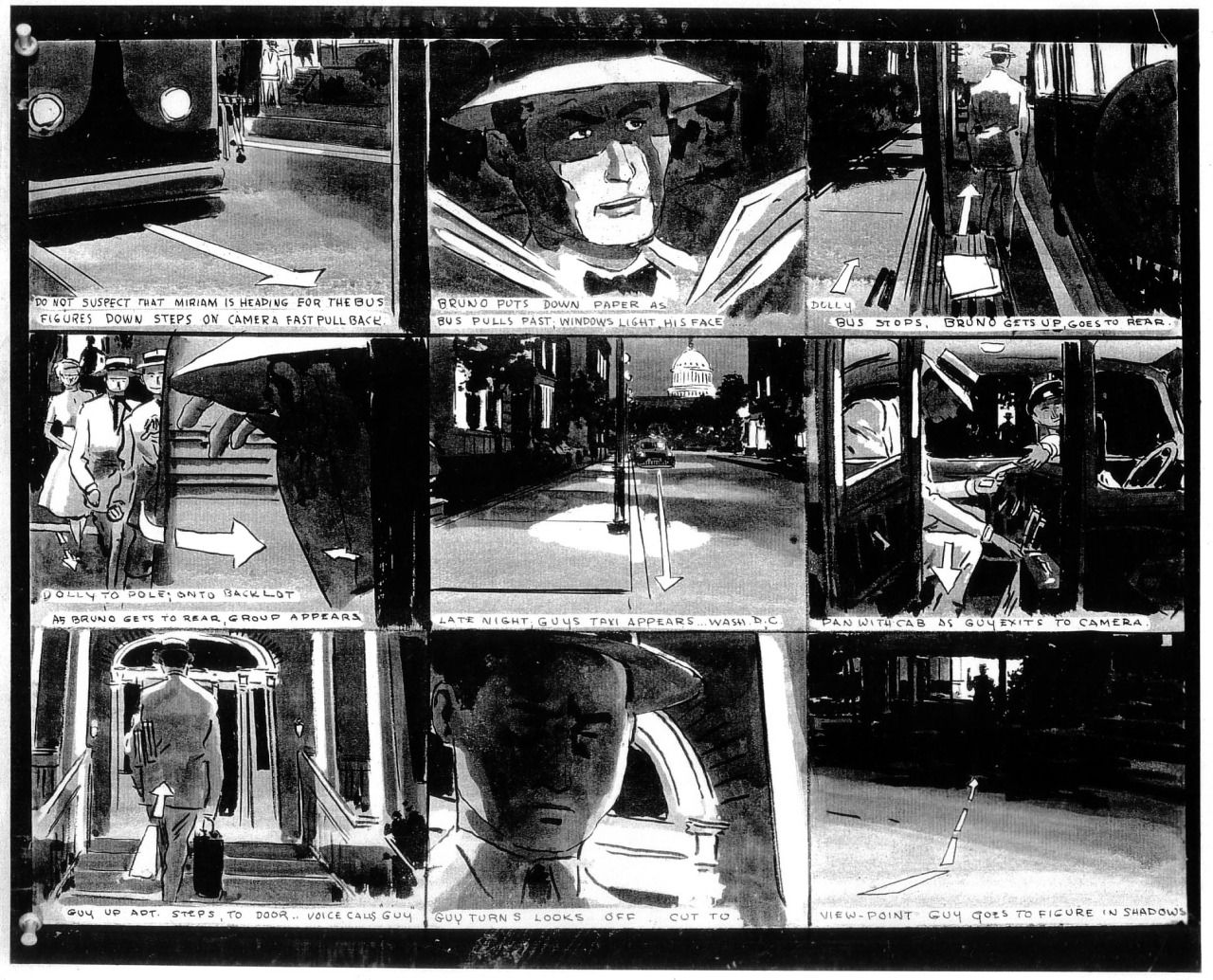 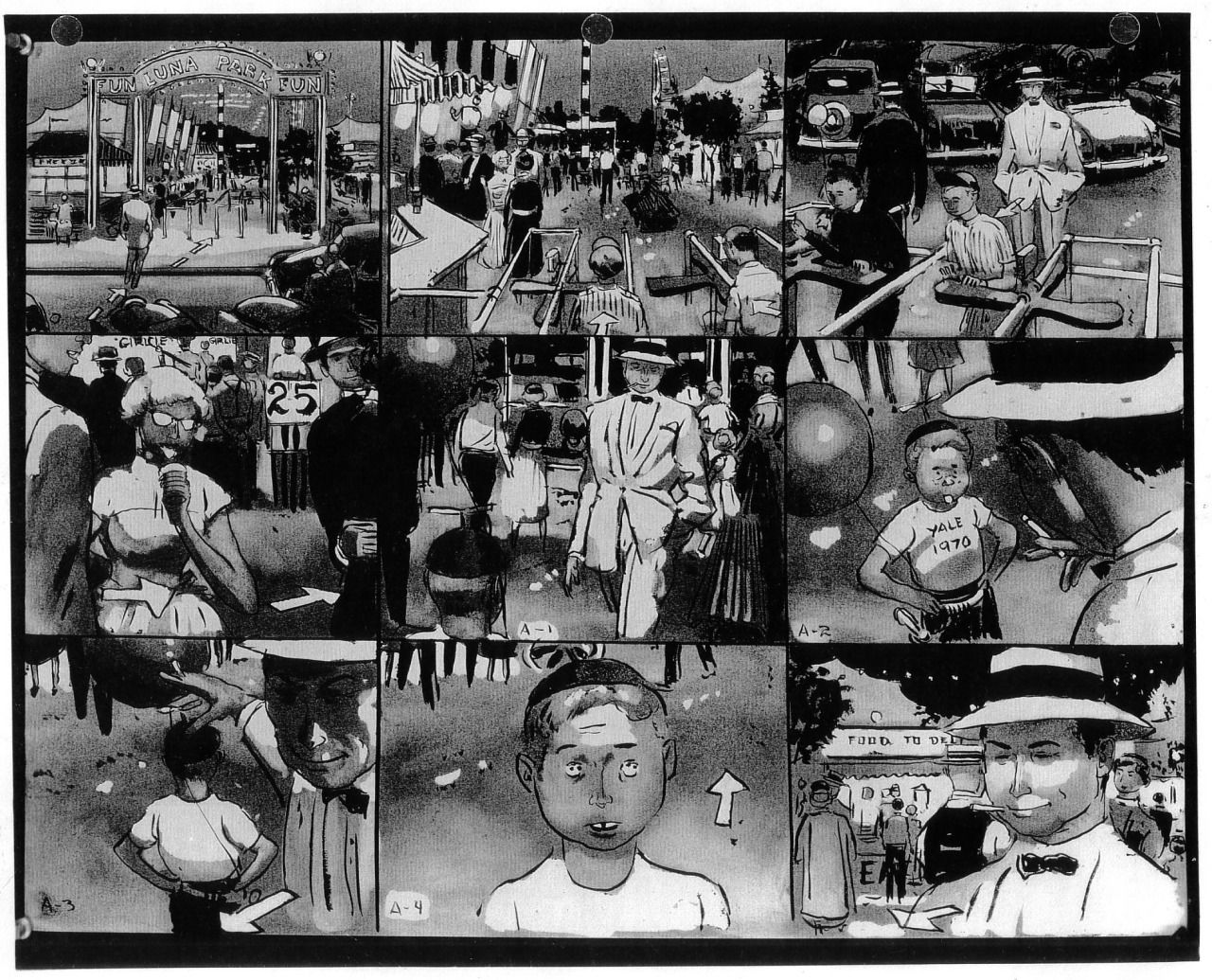 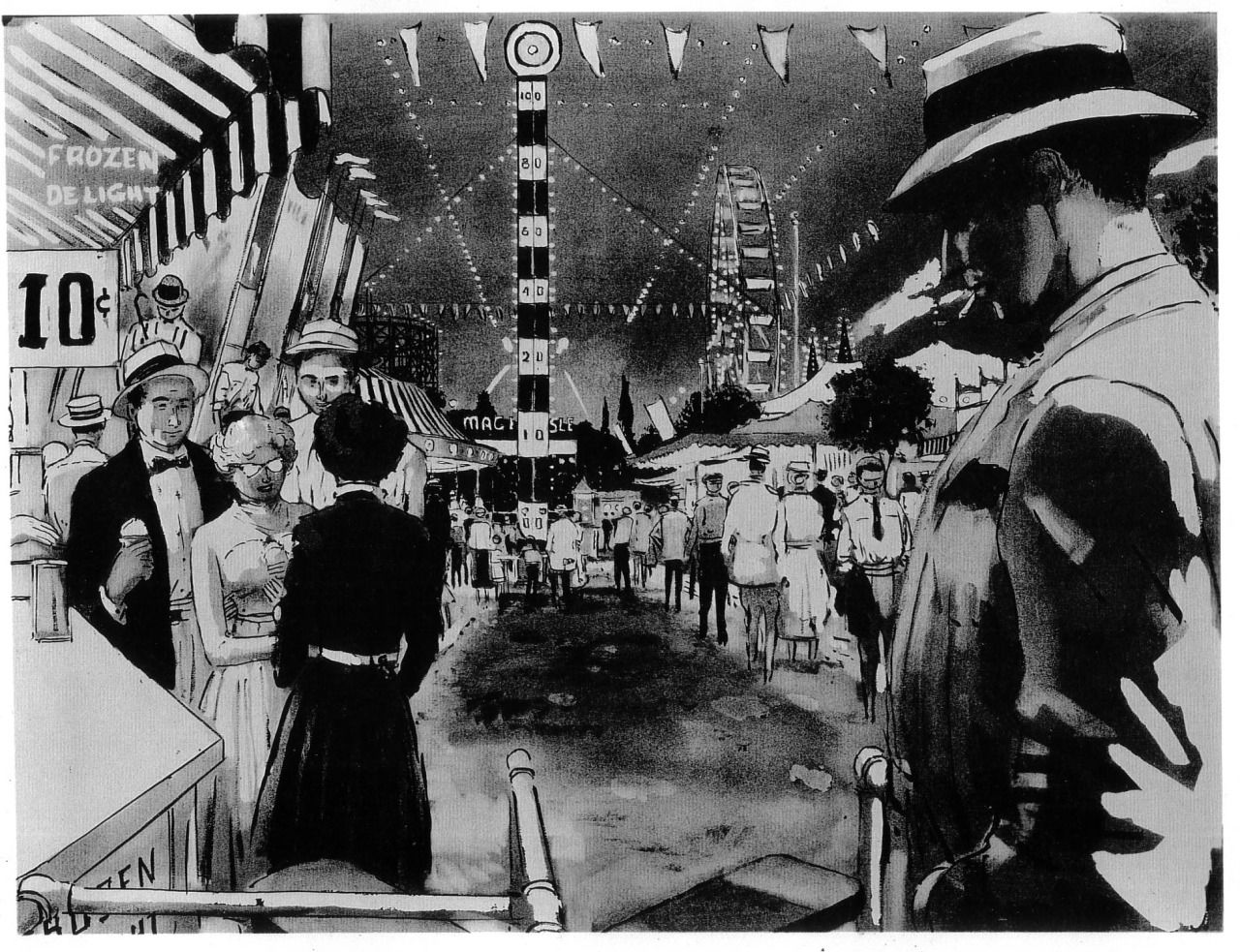 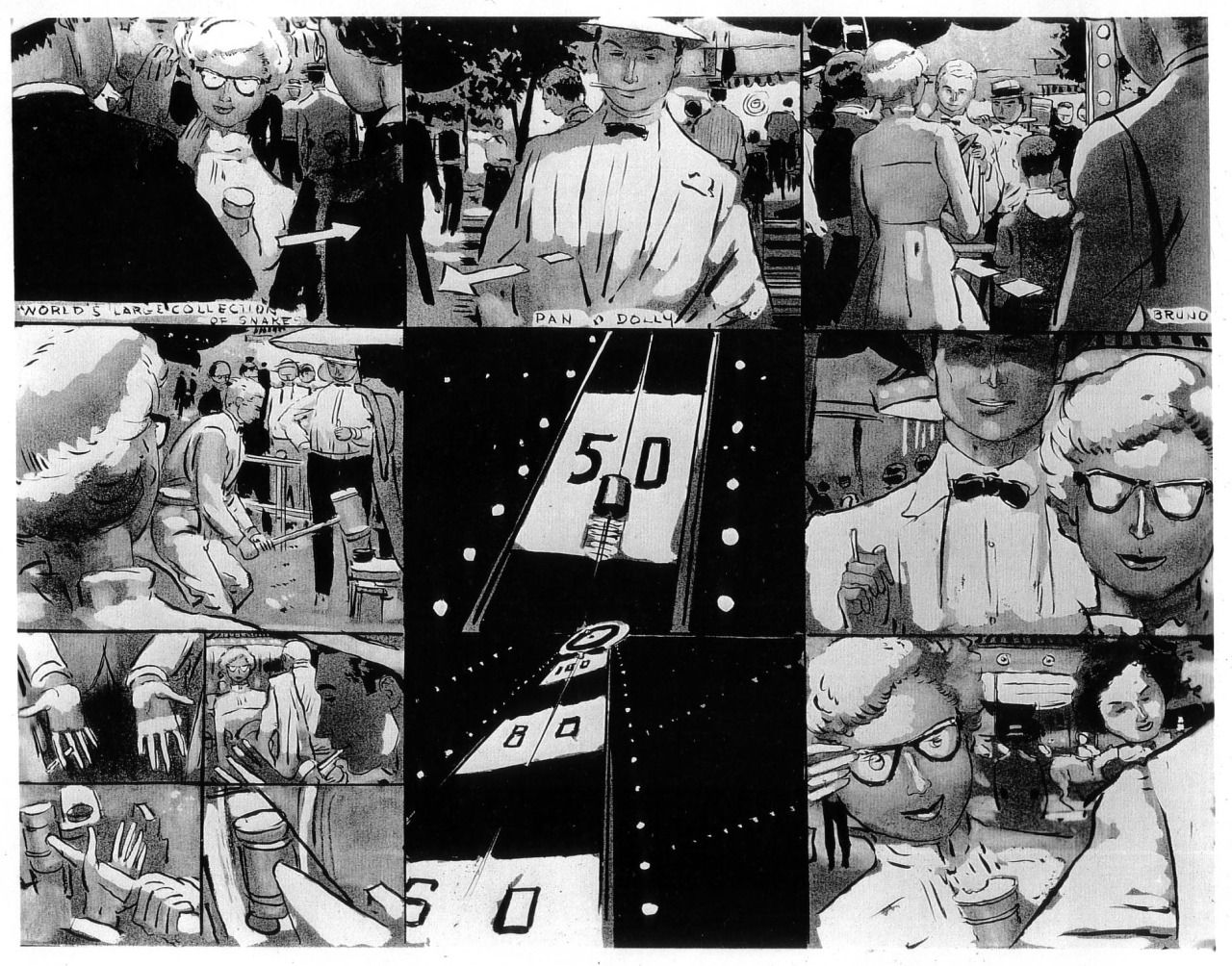 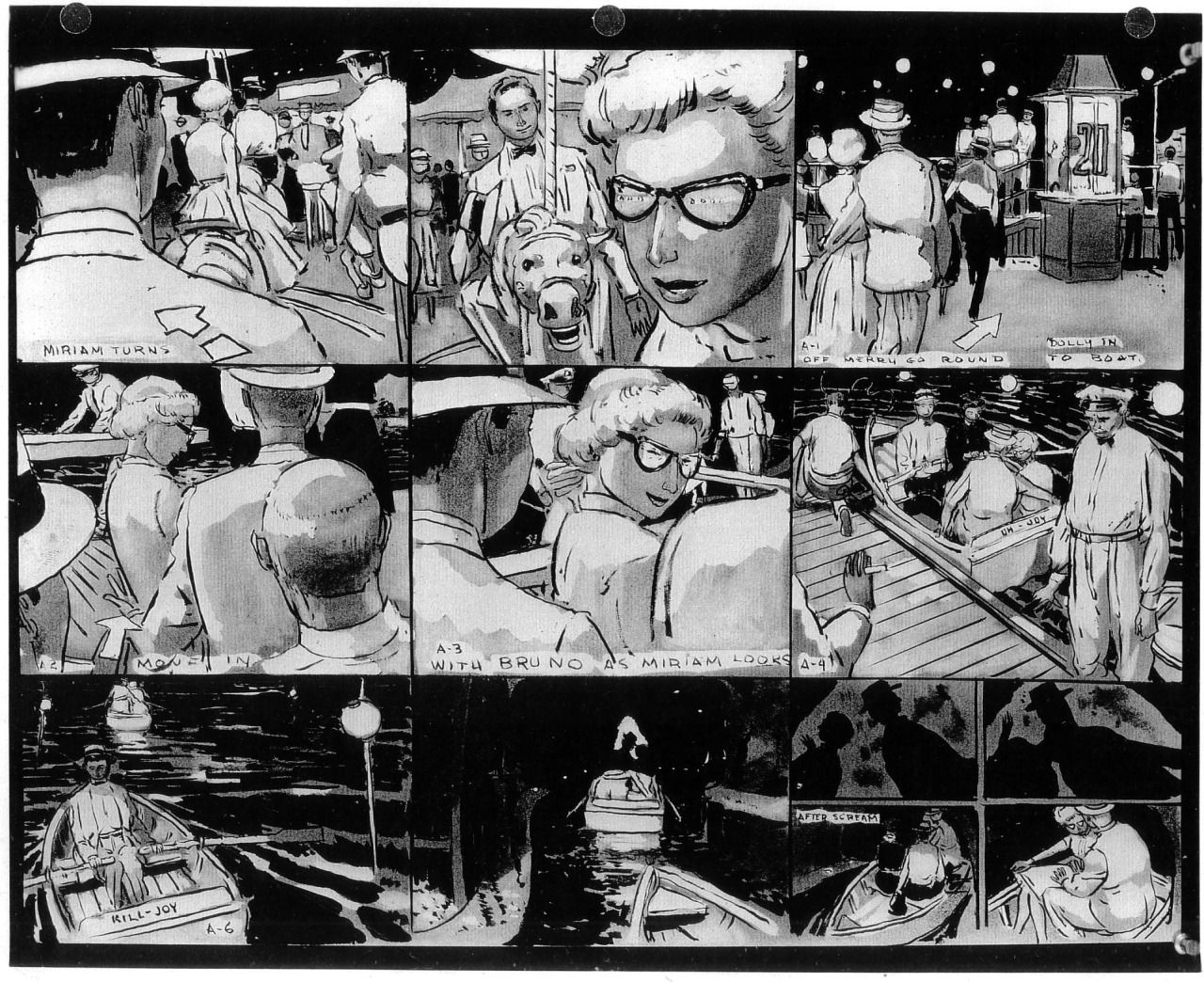 Speaking of priceless, here’s Raymond Chandler & Czenzi Ormonde’s screenplay for Strangers on a Train [PDF]. (NOTE: For educational and research purposes only). The DVD/Blu-ray of the film is available at Amazon and other online retailers.

The Incredible Effects of The Thing, Cinefantastique issue detailing the design and implementation of many of The Thing’s effects sequences.

The visuals of both the desolate Antarctic and the ever-morphing alien creatures in The Thing were envisioned long before the movie was shot.

Extensive storyboards were drawn by artist Michael Ploog so that all the departments of the production were on the same page in their preparation for the shoot. This is nothing new… but the similarity between the storyboards and the final imagery shot by legendary DP Dean Cundey is staggering. Storyboards are often only a guide, but in this film they were so specifically rendered that they became gospel. The detail and artistry of Ploog’s work up front, allowed the crew to have clear and defined goals on those frigid shooting days in both Alaska and Canada.

To demonstrate this point… I’ve taken two scenes from The Thing and laid down the storyboards next to the shots in the final edit of the film. The video below examines the discovery of the alien spaceship and the transformation of Norris in the shocking scene that still haunts me today. Just like Hitchcock worked with Saul Bass to create the famous shower scene in Psycho, Ploog crafted beautiful storyboards for Carpenter so that the time on set was best utilized to tell the story. Be it pencil to paper or an iPad app filmmakers can share the envisionment of the worlds they are creating by using storyboards. —Vashi Nedomansky, The Thing: Storyboards to Film Comparison

Storyboards for Alien (1979) drawn by Ridley Scott, with his handwritten notes, show how the director visualized the first encounter with the extraterrestrial monster, courtesy of DGA Quarterly. 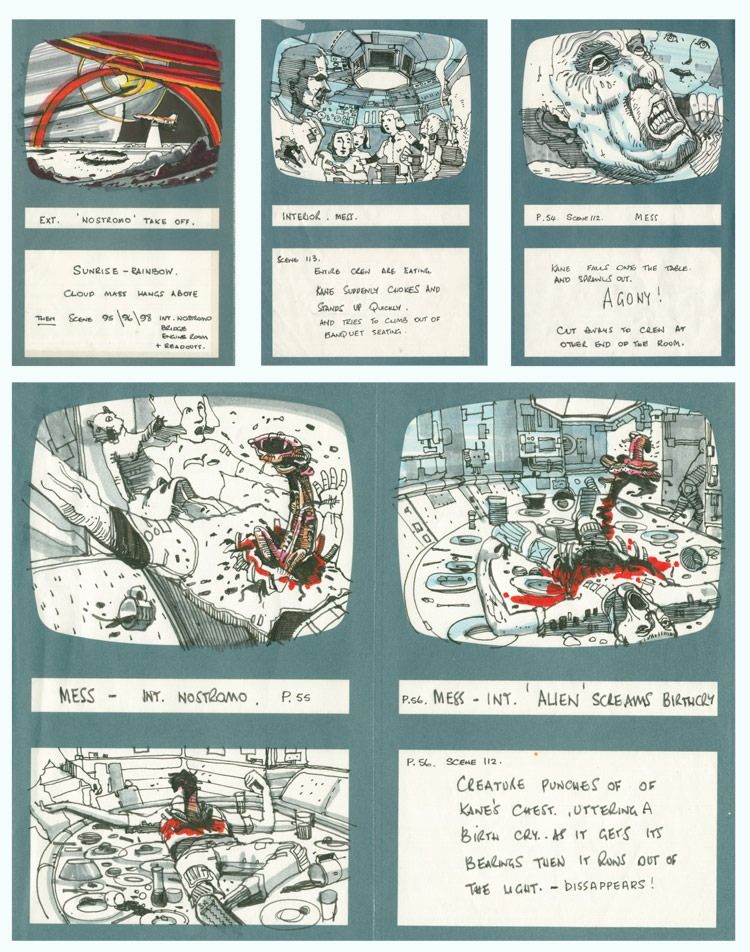 “In the video below, a laid-back Scott, cigar in hand, discusses how storyboards, sketches, and other pieces of hand-drawn imagery help him make movies. Telling how he’s found locations, envisioned scenes within them, and used drawings to build those scenes, Scott offers an insight into the look and feel of his own work and useful advice to fellow creators, whether or not they work in a visual medium. His inspiration begins with an activity as simple—but nonetheless a source of ‘great enjoyment’—as looking at industrial landscapes out the window of a car. Sometimes he even begins thumbnail sketches then and there, in transit. Not only does his drafting background enable him to do that, but it leads to closer working relationships with his professional storyboard artists. Conferring with them mentally prepares him to “hit the floor” and shoot the scene. He reveals that, whether you’re directing a $120 million motion picture, painting a painting, or even writing a blog post, you face the same challenge: ‘Get rid of the white canvas. Get something right across the canvas. Otherwise you’re always looking at that area of white, which is like a blank sheet.’ He notes that his methods have led to some calling his films ‘overdesigned and over-thought out,’ but admits that, at this point, ‘I’ll probably just stay with the plan.’” —Colin Marshall 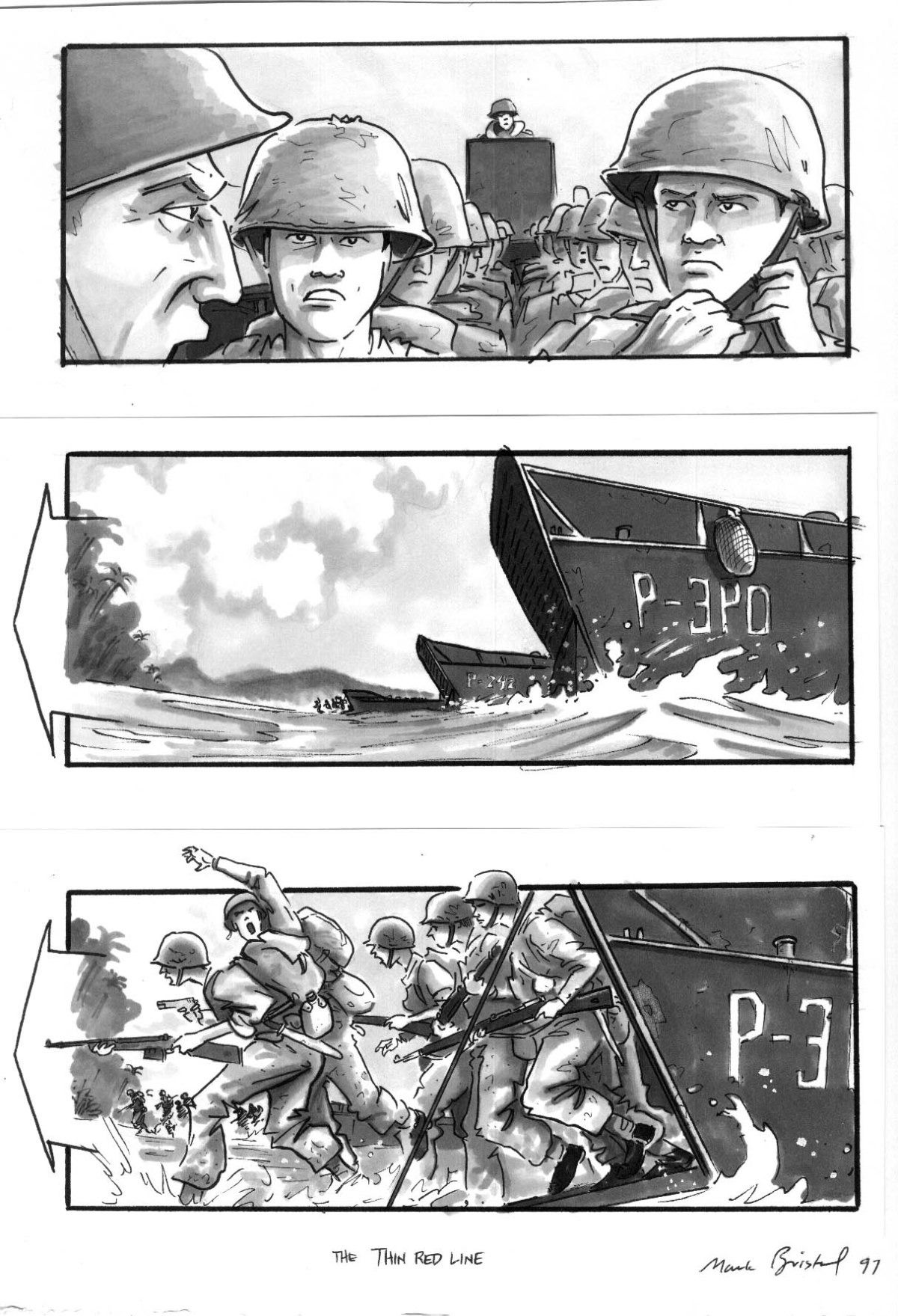 The following video is a rare supplement about the storyboards and editing of Bram Stoker’s Dracula from the long out-of-print Criterion LaserDisc release.

This installment showcases many of the storyboards used to conceptualize Coppola’s vision for the finished film, via the talents of storyboard artists David Lowery and Iain McCaig. There is no sound associated with this file. Feel free to queue up the soundtrack for atmosphere!

You can also study the storyboards in a PDF format. (NOTE: For educational purposes only). The DVD/Blu-ray of the film is available at Amazon and other online retailers.

Vintage prints of the storyboard with camera instructions used in the production of one of the greatest movies of all time, 1941’s Citizen Kane.

A single frame of the celebrated film is drawn in detail and titled: “Ext. Camp In Everglades.” This is the famous scene in which Charles Foster Kane throws an elaborate “picnic” in the Everglades for his second wife Susan Alexander. It ends in a heated argument between the couple that ultimately leads to Susan walking out on her husband. A schematic diagram for the scene’s set design is included. In pencil, “Citizen Kane” is handwritten near the bottom left, and the word “Void” is written in red pencil to the bottom right.

This graphic contains a surprising amount of direction in the nine frames which illustrate the “Roof Of Hospital” scene in which Thompson, the reporter, interviews Jedediah Leland, Kane’s former best friend. A schematic diagram for the scene’s set design is included. Some of the captions read, “Opening on a piece of architectural sculpturing Dolly to Right/Disclosing back of Thompson’s head and Leland reclining/in deck chair as we travel as far as/mesh wire will permit — Cut to…” and “… As we go back to him for/second part change angle to include Thompson and for/third part choose still different angle…”

The five frames illustrate the progression of the “Roof of Hospital” scene in which Thompson, the reporter, interviews the geriatric Jedediah Leland, Kane’s former best friend. A blueprint for the scene’s set design is included. A handwritten caption runs beneath the illustrations and reads: “Bewildering shot of Thompson and camera/travels around reveals Leland as an old man on a roof of hospital in/Arizona — During dialogue activity on roof of nurses caring for other patients/at conclusion of sequence starts down stair/saying goodbye to Thompson.” 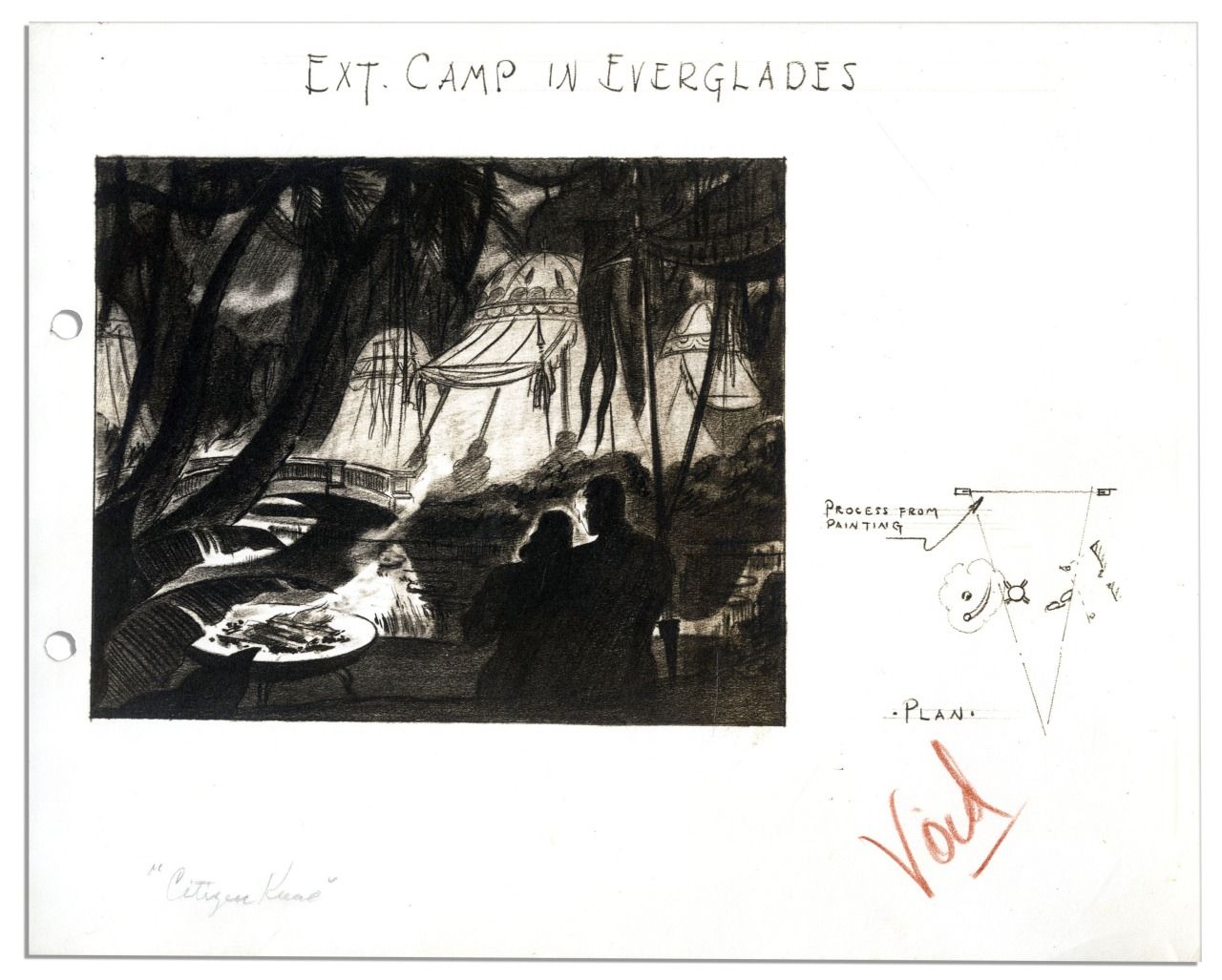 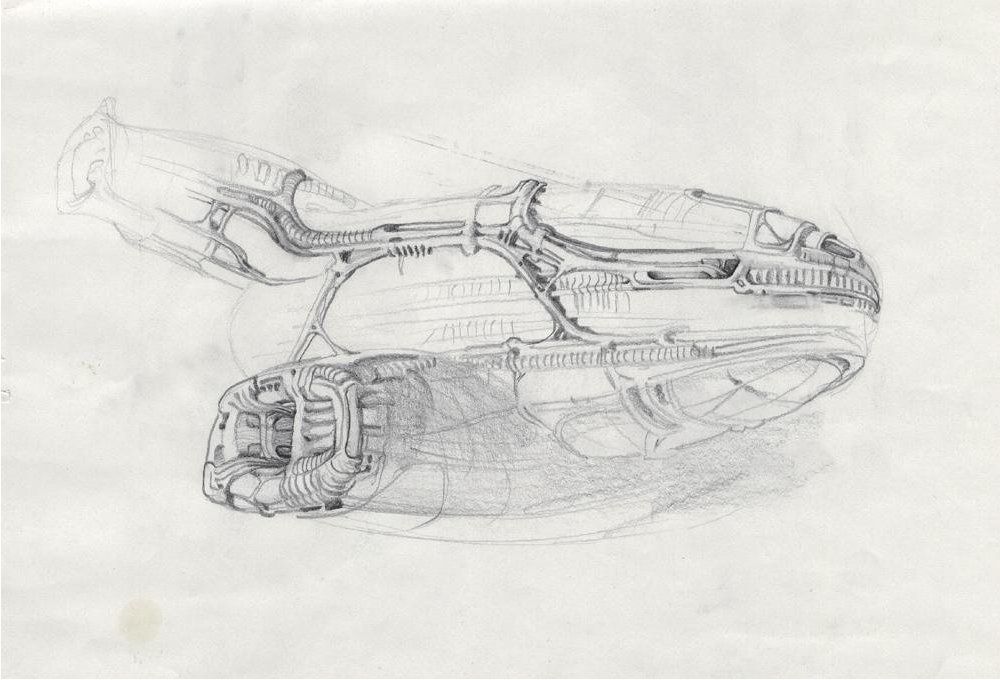 Notes in black are in Cameron’s hand, and those in blue are Skotak’s, and both describe in detail the actual motion and appearance of visual effects for the scene. 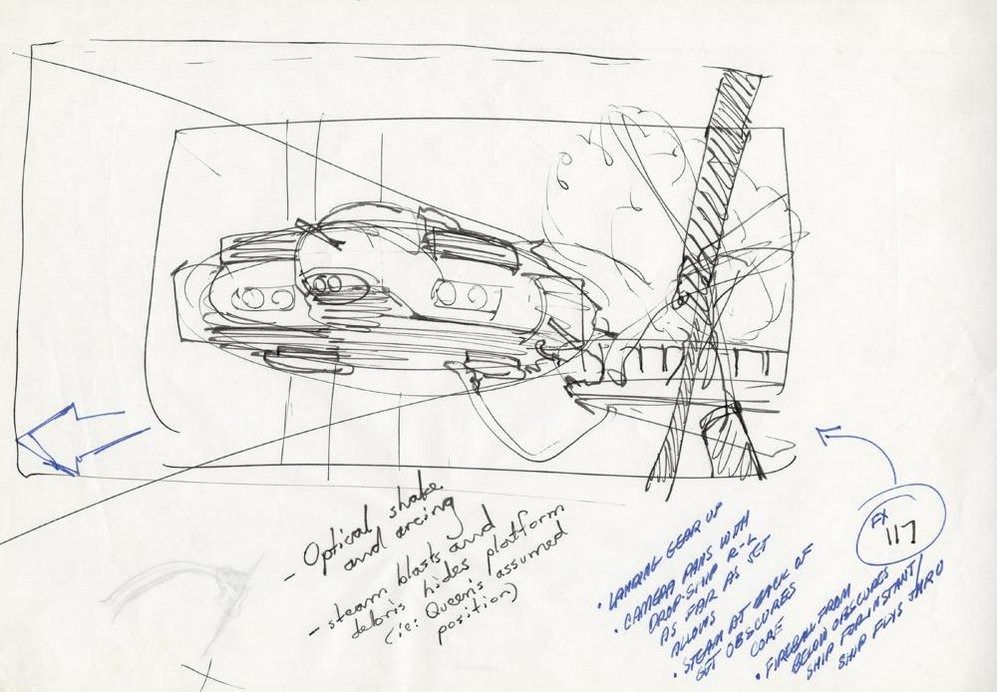 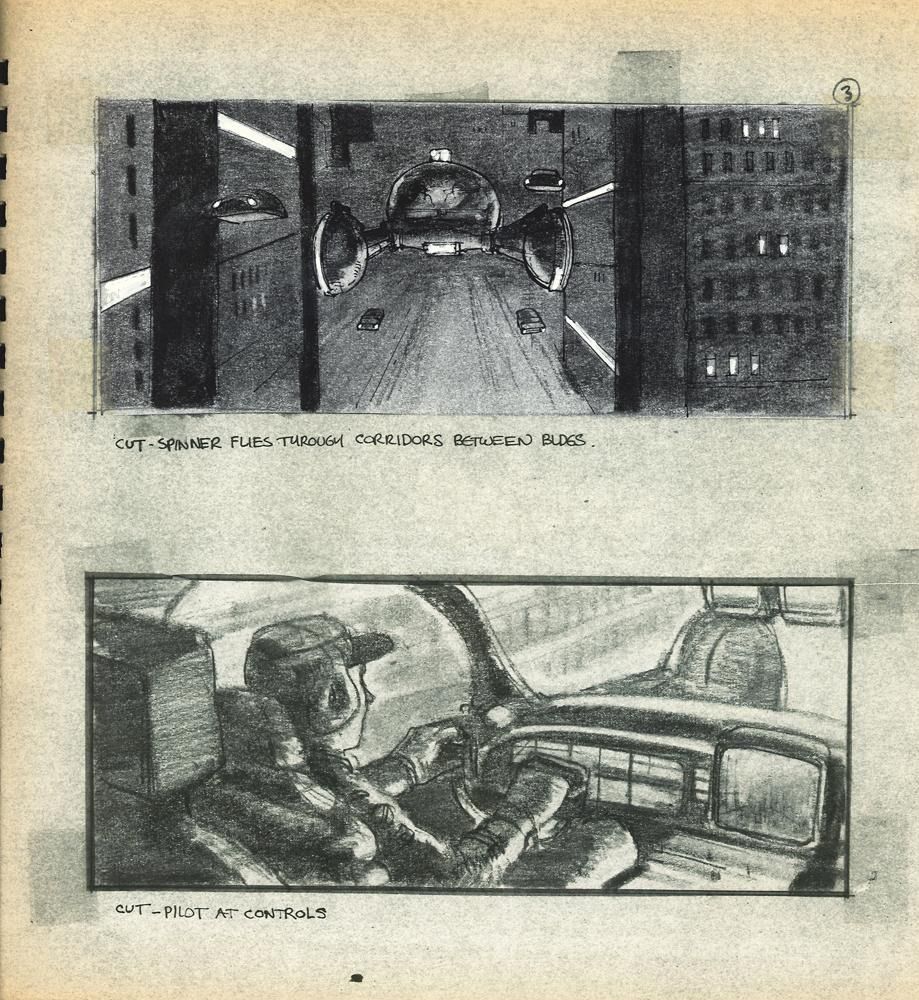 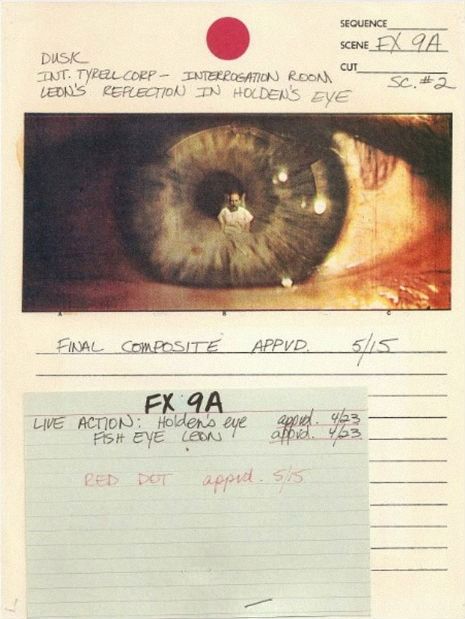 In-depth American Beauty storyboard analysis with director Sam Mendes and DP Conrad Hall, features side-by-side comparisons between frames from the film and the sketches. Director and Cinematographer relationship 101. This is required watching.

Terry Gilliam talking about the importance of storyboarding in a rare documentary from 1990, Never Big Enough.

The Apocalypse Now storyboards, courtesy of The Guardian.

It’s my job to get what’s inside a director’s head on the paper. It’s not my job to create the shot. It’s my job to interpret their language into a visual language. It’s very important that I get as close to the image that’s in their brain on the paper, so that everybody when they walk on the set is making the same movie—they’re not all imagining what’s going on. —J. Todd Anderson