The highly versatile American film director Robert Wise might have indeed won popular support and the Academy’s attention with West Side Story and The Sound of Music, but his contribution to numerous genres is astonishing, especially if we consider what he had done for science fiction. In 1951 he directed the genre classic The Day the Earth Stood Still. Twenty-eight years later he made the first Star Trek film, initiating a trend still alive today in the recent works of J. J. Abrams. But between these two important projects Wise directed a captivating story that aptly explores the terrifying nature and potential of technology in a science fiction film called The Andromeda Strain. A satellite crashes in New Mexico, unleashing a deadly organism that quickly kills everyone in the little town of Piedmont except an infant and the elderly town drunk. A team of four expert scientists gets called to action: in a secret underground laboratory they dedicate themselves to investigating the extraterrestrial virus, trying to decipher what makes it so deadly and if there’s a way to contain it.

Based on the great Michael Crichton’s 1969 best-seller of the same name, The Andromeda Strain was written by Nelson Gidding, Wise’s longtime collaborator. Sticking rather closely to the original novel, Wise’s film is a dark, pessimistic, visually powerful look on technology, as well as a cautioning social commentary. At first, the film shows the vast potential and impressive development of technology, only to commit itself to showing what might happen to humanity at the point when the same technological wonders turn on their very creators. Even if we disregard this direct and obvious criticism, The Andromeda Strain still functions perfectly well as a tension-filled, nicely paced, intellectually stimulating thriller able to satisfy the cinematic needs of most movie-goers inclined to these types of stories.

The marvelously illustrated screenplay, empowered by the use of sketches, diagrams, animations and multi-screen effects so as to better convey the complexity of the vision of Crichton’s novel, was a perfect Christmas present for C&B from Sean McMahon, to whom we send our kind regards.

A monumentally important screenplay. Screenwriter must-read: Nelson Gidding’s screenplay for The Andromeda Strain [PDF]. (NOTE: For educational and research purposes only). The DVD/Blu-ray of the film is available at Amazon and other online retailers. Absolutely our highest recommendation.

“Robert Wise was one of the most acclaimed directors of his generation, yet today is often dismissed by critics as merely a competent craftsman. A more careful viewing of his work reveals the imprint of an artist. Wise was 50 years old when he made The Sound of Music, and a veteran filmmaker of a sort we won’t see again. He had learned cinema from the ground up: carrying prints, patching film leader, assisting in the editing of sound and film, before editing solo. Within a year of his first assignment, Orson Welles tapped him to edit Citizen Kane (1941), earning him the first of several Academy Award nominations. It was while cutting Welles’ second film, The Magnificent Ambersons (1942)—at RKO’s insistence when Welles disappeared to South America on another project—that Wise was obliged to shoot stopgap transitions, his first scenes as a director.” —Revising Wise by Gary Giddins

“Robert Wise discusses his career in the motion pictures, directing features films such as The Sound of Music, The Day the Earth Stood Still, and West Side Story, his directing methods and his ‘Three Ps’ to success in the film industry.” —Visual History with Robert Wise

Author Michael Crichton and producer-director Robert Wise take you behind- the-scenes of The Andromeda Strain in this original 1971 short titled ‘Science Fact or Science Fiction?’

A student’s-eye-view of the behind-the-scenes world attendant to the production of a super-dramatic “whatdunit” science-fiction thriller based on a best-selling novel. 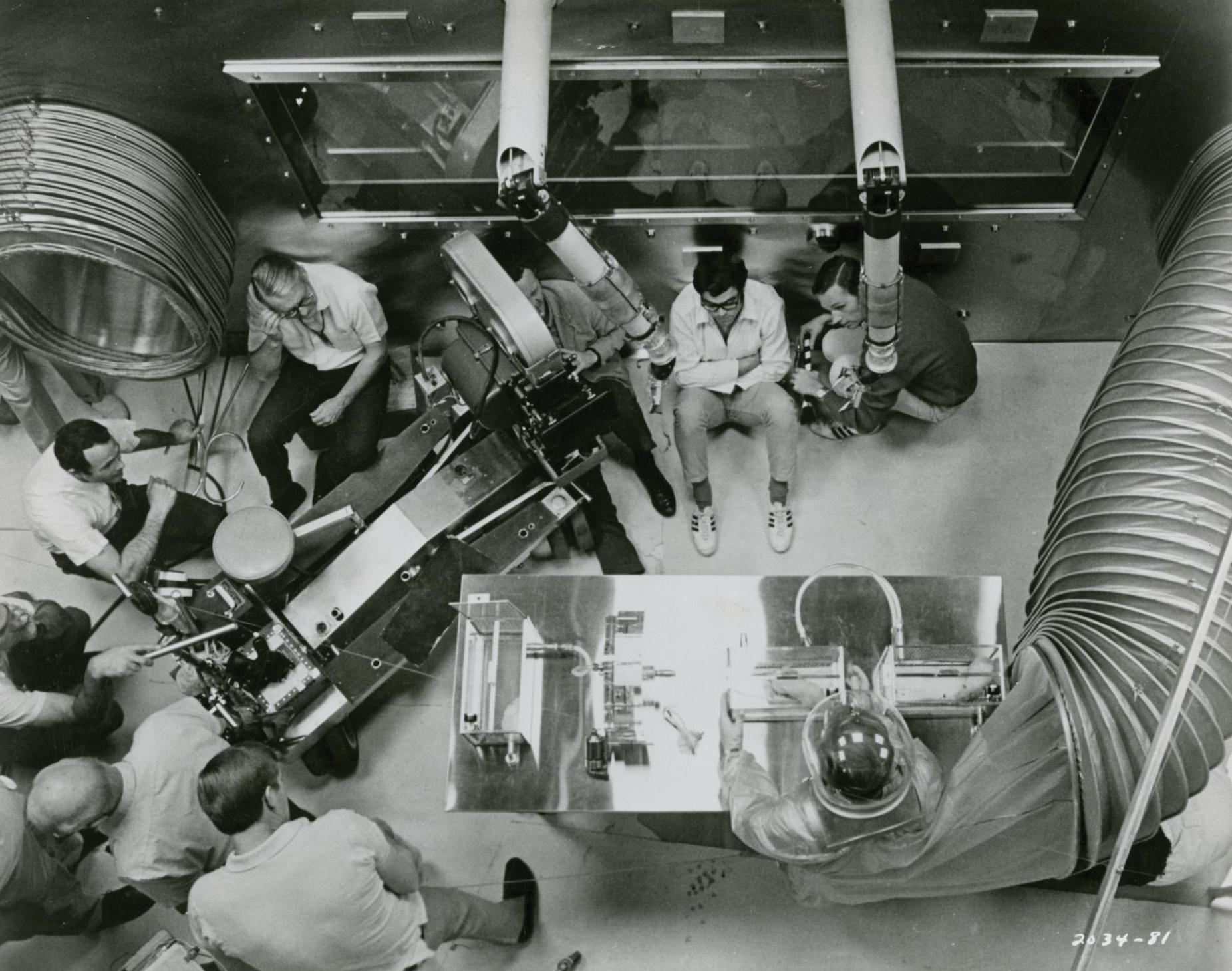 THE FILMS OF ROBERT WISE

Robert Wise talks about Orson Welles and working on Citizen Kane and his films in this 45 minute documentary. With Ernest Lehman, Robert Mitchum, and Julie Andrews.

Here are several photos taken behind-the-scenes during production of Robert Wise’s The Andromeda Strain. Photographed by Larry Barbier © Universal Pictures. Courtesy of Michael Ochs Archives, Royal Books. Intended for editorial use only. All material for educational and noncommercial purposes only.