The paranoid, skeptical, post-Watergate America gave birth to Sydney Pollack’s first-class thrilller Three Days of the Condor. The film, carried out on the shoulders of glorious Robert Redford and Faye Dunaway and orchestrated masterfully by Pollack, is based on James Grady’s novel Six Days of the Condor, adapted by screenwriters Lorenzo Semple, Jr., the writer of The Parallax View, and David Rayfiel, a frequent collaborator of Pollack’s. In a nail-biting way, the film delves into the moral ambiguity that characterized the early 1970s US government and deftly reflects the prevailing feelings of distrust and betrayal in the American society. We urge you to take a careful look at Semple Jr. and Rayfiel’s screenplay, one of the more prominent examples of fine spy thriller writing. Also, don’t make the mistake of ignoring Lorenzo Semple, Jr.’s 2008 two-and-a-half hour interview, in which he discusses the high points of his career in feature films (Papillion, The Parallax View, Three Days of the Condor), or Hollywood’s great interview with Pollack two years before his death in 2008.

A monumentally important screenplay. Screenwriter must-read: Lorenzo Semple, Jr. & David Rayfiel’s screenplay for Three Days of the Condor [PDF]. (NOTE: For educational and research purposes only). The DVD/Blu-ray of the film is available at Amazon and other online retailers. Absolutely our highest recommendation.

In his two-and-a-half hour archive interview, Lorenzo Semple, Jr. outlines his successful career in feature films with such movies as Papillion, The Parallax View and Three Days of the Condor, as well as the cult classics Pretty Poison and Flash Gordon. Lee Goldberg conducted the interview on September 25, 2008 in Los Angeles, CA.

The film was three-quarters finished before any of these CIA revelations began to happen. We were doing a straight thriller. That’s what we wanted to do. And we were shocked that as much of what we imagined, if you will, was coming to pass. We were absolutely dumbfounded. The attempt was, first of all, to make it faithful to the genre of a thriller. And within that, to explore certain ideas of suspicion, trust, morality, if you will; but it was not intended in any way as a documentary, I suppose, but as a warning—using the CIA almost as a metaphor, and drawing certain conclusions from post-Watergate America. —Hollywood uncovers the CIA: Three Days of the Condor Sidney Pollack interviewed 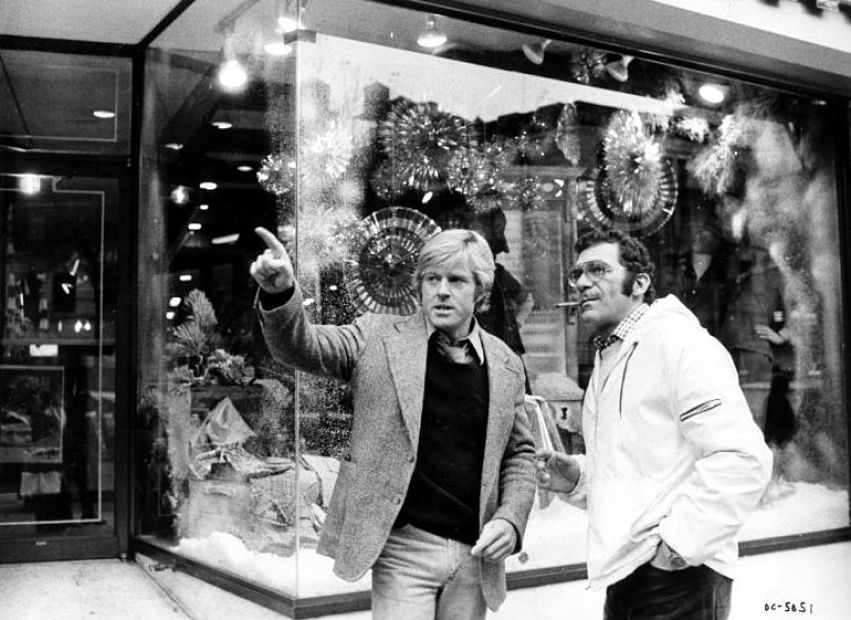 Let’s talk about Three Days of the Condor.
That’s another film that’s gained stature over the years, although when it came out, several of the New York critics took it very seriously. It was kind of a prescient movie because we thought we were really going out on a limb talking about destabilizing foreign regimes in the interest of oil and the CIA killing people and then all of the sudden, all this crap comes out, while we were shooting the movie! All the stuff about dirty tricks with Nixon. We cooked all that stuff up that’s in the movie in a hotel room one night, and we’re thinking ‘Man, maybe this is just too far out. Is anybody really going to buy this?’ (laughs) But that part of it worked.

There are definite Hitchcock elements in Condor. Was he a big influence for you?
You know, I’m embarrassed to say, no. I’m really pretty illiterate when it comes to film. I have to make myself watch a movie. I really don’t know film history all that well. I saw ‘Psycho’ (1960), (laughs) what can I tell you? I know all his films are famous and I know he was a great director. I just take everyone’s word for it that he was the original cineaste. When I get around somebody like Steven Spielberg who says “It’s like that great scene in Wyler’s movie where such and such happens…,” I feel illiterate. But a lot of those guys went to film school and were passionate movie buffs from the time they were kids. I backed into movies. I never wanted to have anything to do with movies, or ever saw myself as a director. I just saw myself acting in the theater in New York. I still don’t see that many movies. It’s hard for me to make myself go to a movie and sit in a crowd. I can’t wait for the films to be over. (laughs)

That doesn’t mean that I don’t love them, because I do. Once I get in there and get transported, it’s great. But I feel like it’s work. It’s my job. And I don’t want to be doing it when I have free time, you know? If I have the evening off, the last thing I want to do is go to a screening. I do have a screening room at home, like all spoiled brats in Hollywood, and I have screenings at home a lot. I’m terrifically impressed with a lot of the new younger directors like David Fincher, and I enjoy producing a lot of them. So Hitchcock wasn’t a big influence on me simply because I didn’t know his work. Had I known his work, he absolutely would have been. I actually spent more time at Hitchcock’s house with him personally than I did seeing his films.

Robert Redford in Three Days of the Condor. How was that?
My wife was an actress and she was under contract to him for seven years. She was going to take Grace Kelly’s place after she became a princess. My wife, Claire, was the girl in the famous Twilight Zone with Robert Duvall playing the ballerina doll. So Alfred Hitchcock hired her, put together a huge, expensive reel on her, then she got pregnant with our second child and Hitchcock was furious with her. But while she was under contract, we used go have dinner with he and (his wife) Alma at their house! I was too naive to realize what a great opportunity this was. I directed several of the ‘Alfred Hitchcock Presents’ for him, and was in one that Norman Lloyd directed. But when I spent time with him, I wasn’t even smart enough then to know what to ask him. Spielberg stares at me and says “You got to spend all that time with Hitchcock and Stanley Kubrick. I’m so jealous!” (laughs) —Sydney Pollack: Hollywood’s Quiet Icon