When news came out that Lionsgate was making a film adaptation of Steve Hamilton’s ‘The Second Life of Nick Mason,’ the new thriller that came out today, we were, for the lack of a better word, thrilled. Hamilton is the guy responsible for the excellent Alex McKnight series, and since we’ve always been soft for quality thriller/mystery fiction, we decided to try to reach out to Mr. Hamilton and chat for a bit about his career. Luckily, in all the chaos of book touring and publicity choirs, he managed to sit down and have a chat with us. His first novel ‘A Cold Day in Paradise’ brought him the prestigious Edgar award, New York Times honored his work by putting several of his books on their bestseller lists, but this is the first time a film studio has shown interest in bringing his stories to life. We especially wanted to know how Hamilton was feeling on the verge of this well-earned breakthrough.

You’re known today as one of the most critically acclaimed mystery writers in the world. How difficult was it for you to get to where you are now?
Thank you for the compliment, first of all. But I just focused on writing one book at a time, as well as I could write them. This was the promise I made to myself long ago, that I would do whatever it took to become a fulltime writer.

I’ve read that you wrote your first twelve novels while at the same time working for IBM, grinding away at night before the next morning’s shift. It must have been a real challenge. What kept you going and what were you forced to sacrifice in the process?
It was exhausting. For years, I felt like I was leading a double life. I put everything I had into this. While my coworkers were going on vacations, I was going on book tours. But ultimately, I wrote twelve books that way, put two of them on the extended New York Times bestseller list, won two Edgars, wrote two New York Times Notable Books of the Year. That was enough to keep me going, because I knew I was keeping that promise to myself, and doing the one thing I had a real passion for.

In 1999, you were awarded the Edgar award for your first novel, ‘A Cold Day in Paradise.’ It must have been a great surprise for you and enticement for future work?
I remember that night so well. I was still feeling very lucky just to have that first book published—I couldn’t believe that it was nominated for the highest award in the business. When it won, I was so glad to have my wife with me, and also my editor, the legendary Ruth Cavin. Sadly, she’s gone now.

In your beginnings as a writer, you enlisted in a writing group because you felt you needed discipline in your work, you needed deadlines. How do you “force” yourself to write today? Have you developed a system that suits you and makes you comfortable?
A writer’s group can create a structure and impose unofficial deadlines, but now I have real deadlines! I write in the late mornings now, every day, and then I come back to it late at night. Even now that I don’t have to stay up late, it still feels like my time.

‘The Second Life of Nick Mason’ drew wonderful praise from your contemporary colleagues such as Don Winslow, Lee Child, Harlan Coben, Stephen King and others. What does their support mean to you?
I can’t even tell you how much it means to me, because these are the writers that I love reading so much. They inspire me, and they make me feel incredibly lucky to be in the same business.

The book came out today. What do you expect its impact will be? As difficult as it is to praise your own work, what would you say makes ‘The Second Life of Nick Mason’ a thrilling read?
After everything we went through to get here, I’m so happy to finally see this day come. The biggest thrill of all might have been seeing the Janet Maslin review, my first ever, on the front page of the New York Times Arts section. But more than anything, I’m just happy that readers will finally be able to read this book, and if it really is a thrilling read (thank you), then it means I’ve done my job as a writer. It’s that simple. I wanted this book to grab the reader from the very first line.

Lionsgate hired Richard Wenk, the screenwriter who penned The Equalizer, to adapt ‘The Second Life of Nick Mason’ to the big screen. Did they consult you in any way in making this decision?
Shane championed the hiring of Richard Wenk, and I was thrilled to see that happen. I loved The Equalizer, and even though Robert McCall is a very different character, I can see Richard’s sensibilities working perfectly for Nick Mason. Richard also co-wrote the upcoming Jack Reacher: Never Go Back, starring Tom Cruise, and Magnificent Seven, starring Denzel Washington, so he’s a versatile talent and obviously very much in demand, for good reason.

A big motion picture definitely marks a new phase of your career, where your work is bound to reach an even wider audience. What part did Shane Salerno play in the development of The Second Life of Nick Mason, the movie?
He was instrumental in driving the whole process, and partnered with Nina Jacobson to bring the book to Lionsgate. Shane is a screenwriter himself (he wrote one of the sequels to Avatar, the highest-grossing movie of all time, and he’s currently adapting Don Winslow’s The Cartel). He’ll actually be one of the producers for the Nick Mason movie, along with Nina Jacobson (the creative force behind The Hunger Games franchise). If they get this first movie right, and I have every reason to believe they will, there may be more!

Last summer you made the headlines when you finished your 17-year-old partnership with St. Martin and signed a deal with Putnam. You explained you decided to choose a new publisher due to their utter lack of support. Nine months from the separation, how do you feel about your decision?
I’ve gone from the most terrifying time of my life to perhaps the most gratifying. The three starred reviews from the major trade publications (Publishers Weekly, Kirkus, and Booklist), the amazing review by Janet Maslin in The New York Times (along with both the Marilyn Stasio review and the 2-page ad in the New York Times Book Review), both a national profile and a review in The Wall Street Journal, both a national profile and a review by the Associated Press, the praise from some of the biggest names in the business (including Stephen King, Michael Connelly, Lee Child, Harlan Coben, and Don Winslow), the first real national book tour of my career, over 30 radio and television appearances… It’s been an amazing ride, but in the end it all comes down to the book itself. I believed in it enough to bet everything—and now that it’s finally coming out, it feels like it was all worth it.

Considering how much effort you put into developing your characters, and the way you never sacrifice credibility for the sake of adrenaline-pumped action and plot twists, it seems that ‘The Second Life of Nick Mason’ might offer film lovers a different kind of a film. How involved will you be in making sure that this potential isn’t messed up?
As long as the right people are involved in the making of the film (and they are!), I have absolute confidence that they’ll do a great job. They really get what this character is about, and that’s the most important thing of all.

At what exact stage are the preparations for the film adaptation of ‘The Second Life of Nick Mason’?
They are moving fast to get into preproduction, and Richard Wenk is deep into the screenplay.

You stated you never have an outline of the story prepared in advance, that you simply allow the story to unfold itself, and organically grow. Many critics praise your work especially because of this quality that makes your novels seem almost effortlessly written. But how often do you get stuck? It surely has to be times when the story ends up in what appears to be a wall.
That was my process for ten Alex McKnight novels, but I learned some important lessons that I was able to apply in the development of this new series. I had a much more clearly defined conception of who Nick Mason is, before I ever wrote a word. In fact, I have the first seven books plotted out in great detail. I’m excited about where this series is going to take him.

Who are your literary role models? Whose work inspires you the most?
I love the great American hardboiled writers like Raymond Chandler, James Crumley, and Elmore Leonard. They made me fall in love with crime writing in the first place, and made me dream about someday doing it myself.

Are you still nervous upon facing the first blank page of your novel? With all your experience and success, does writing still present you the exciting challenge it once did?
I am still nervous about the empty page. I think every writer should be. It should never feel easy, because then you’re not challenging yourself to do something better than you’ve ever done before.

The more famous you get, the list of your obligations and necessary hassle regarding interviews, book tours and similar stuff get in the way of your writing. Does any of it frustrate you?
I know that I’m very fortunate to have these opportunities, so you’ll never hear me complaining about them. I get to write books, and even when I’m out on the road, I get to spend time with readers, talking about these fictional worlds that we’ve all spent so much time in together. That’s an incredible gift that I’ll never take for granted. 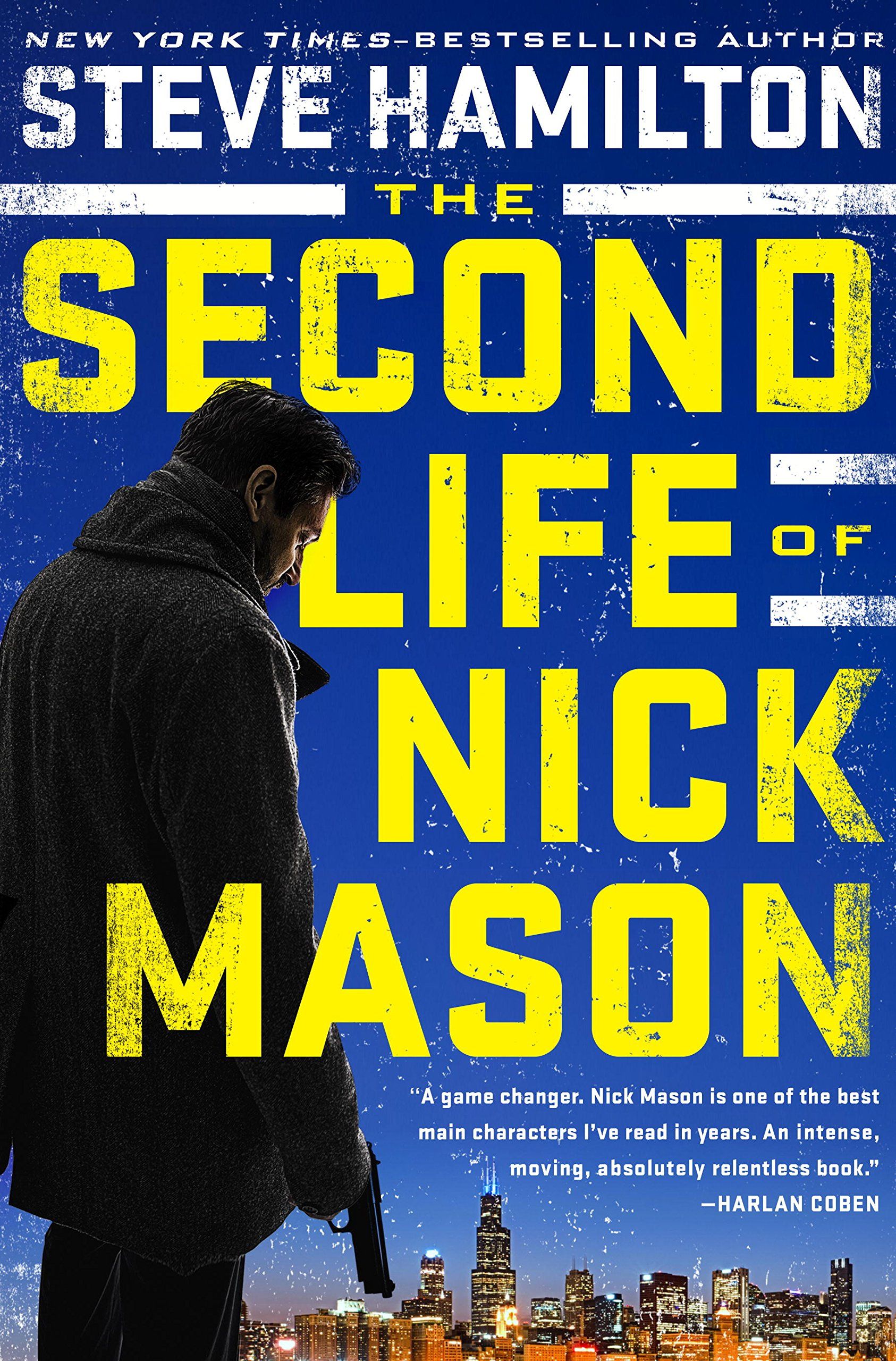