One of the most interesting cultural personas of the British fifties and sixties, the versatile writer Wolf Mankowitz made a name for himself in the spheres of literature, film industry and theater. As a child of two Russian Jewish immigrants, he lived in poverty but unexpectedly got the opportunity to turn the tables around when he received a scholarship for Cambridge, where he went to study English and soon dedicate himself to writing. In 1952 he published his first novel ‘Make Me an Offer,’ which was soon turned into a film and a successful West End musical. The very next year his biggest literary success came out: ‘A Kid for Two Farthings’ was translated into many languages and ultimately ended up as a Carol Reed film. In 1960 he wrote the script for Anthony Asquith’s The Millionairess, an adaptation of George Bernard Shaw’s play with Sofia Loren and Peter Sellers in leading roles, and his musical Expresso Bongo, a fine satire of the music industry, blossomed as a successful movie with Cliff Richard and Laurence Harvey. Interestingly enough, one of Mankowitz’s biggest contributions to the world of cinema came surprisingly from a project he didn’t even want his name on. Mankowitz introduced his friend Albert ‘Cubby’ Broccoli to Harry Saltzman, the man who held the film rights to James Bond. This partnership instigated one of the biggest franchises in the history of film business starting with Dr. No, but Mankowitz, fearing the movie would be a huge flop that could potentially seriously damage his reputation, asked that his name be removed from the credits, even though he worked on the script. Mankowitz would later, however, write the screenplay for the 1967 Bond movie Casino Royale.

Mankowitz continued to write all the way until 1991, when he anounced he suffered from cancer and stepped away from the spotlight. Some MI5 files released in 2010 revealed that the famous screenwriter and playwright had been seen as a security risk by the secret service for roughly a decade after the Second World War due to his Russian roots, connections and the fact that his wife was once a member of the Communist Party, a suspicion that caused Mankowitz to unsuccessfully apply for several BBC positions during the fifties. He was ultimately allowed to join BBC on a three-week contract to translate and dub Anton Chekhov’s ‘The Bear’ for television, but not before BBC consulted the secret service first, concluding that translating Chekhov, despite Mankowitz’s obviously controversial background, failed to present any serious security risks for the country.

Today we bring you a precious interview with Mr. Mankowitz published in the February, 1974 edition of the great Filmmakers Newsletter. The esteemed novelist and screenwriter talks about the differences between writing for the stage, film and literary audiences, about his greatest professional successes, the problems he faced throughout his career, the role of the writer both as someone who tries to illuminate and to entertain, and much more. It’s a wonderful and educational read we wholeheartedly recommend, especially if you want to learn more about the craft from the mouth of one of Britain’s best. You can download the PDF version here. 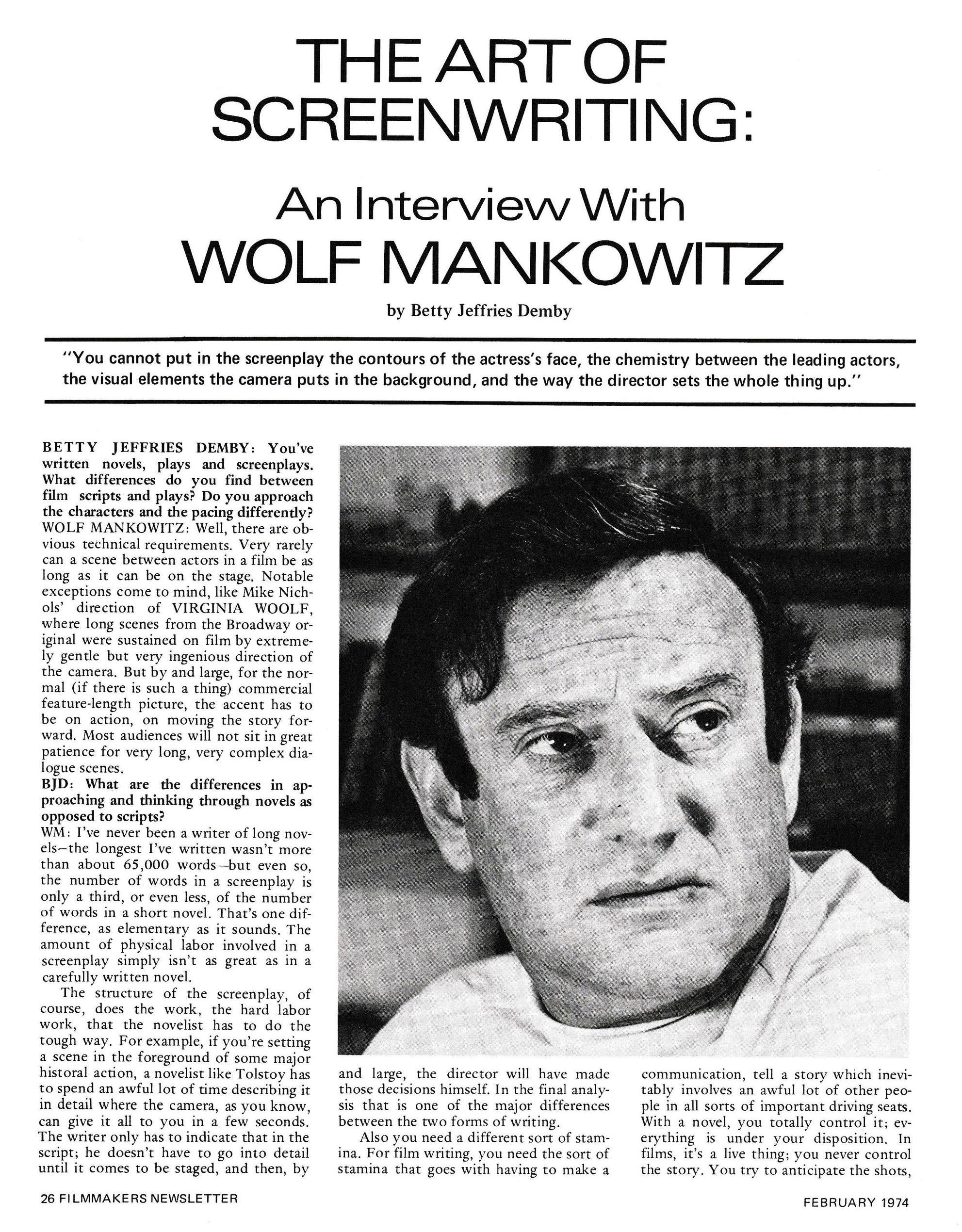 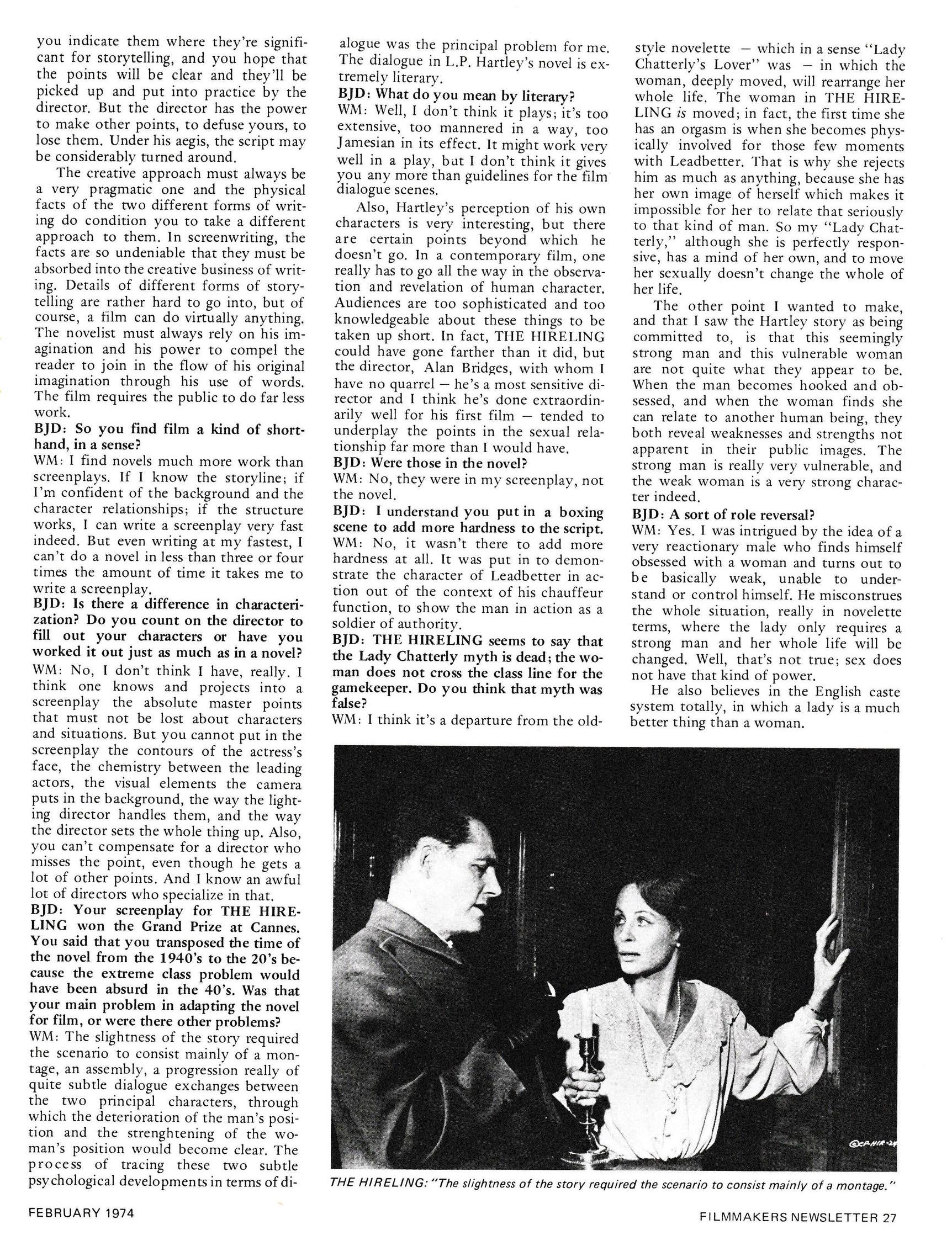 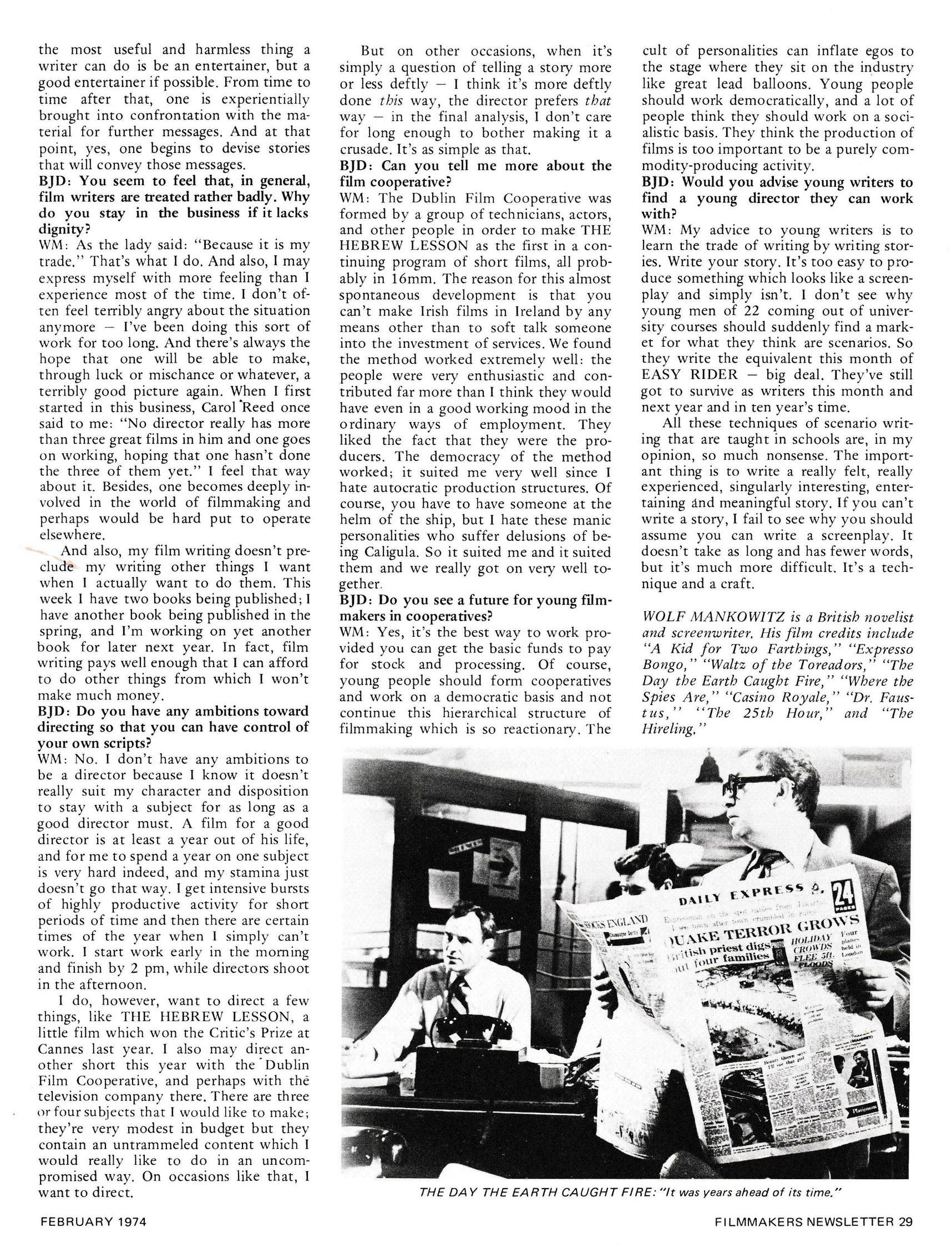 READ THE SCRIPT PAGES FOR JAMES BOND’S FIRST EVER SCENE

“The task of adapting the 1958 novel ‘Dr No’ for the screen initially fell to Richard Maibaum and Wolf Mankowitz, with Johanna Harwood and Berkely Mather brought in to polish later drafts. At this time, Mankowitz—a friend of ‘Cubby’ Broccoli’s—was best-known for the Peter Sellers-Sophia Loren vehicle The Millionairess (1960) and the apocalyptic sci-fi The Day the Earth Caught Fire (1961). He would later ask for his name to be removed from the Dr No credits after seeing the rushes and fearing a major flop. Maibaum, on the other hand, who had spent the 1950s writing war films like The Red Beret (1953) and The Cockleshell Heroes (1954), as well as Nicholas Ray’s Bigger than Life (1956), would go on to make a career out of Fleming’s secret agent, penning a further 12 Bond films before bowing out with Licence to Kill in 1989. To celebrate Mr Bond’s cinematic anniversary, we present an extract from the fifth draft script. It’s the classic moment part-way into Dr No in which the suave superspy (played in the film by Sean Connery) is first introduced to the world. The scene is a London gambling room called Le Cercle, where at the top stakes table, surrounded by onlookers, a chic woman in a red dress and a tuxedoed man with his back to the camera issue their commands to the croupier…” —British Film Institute 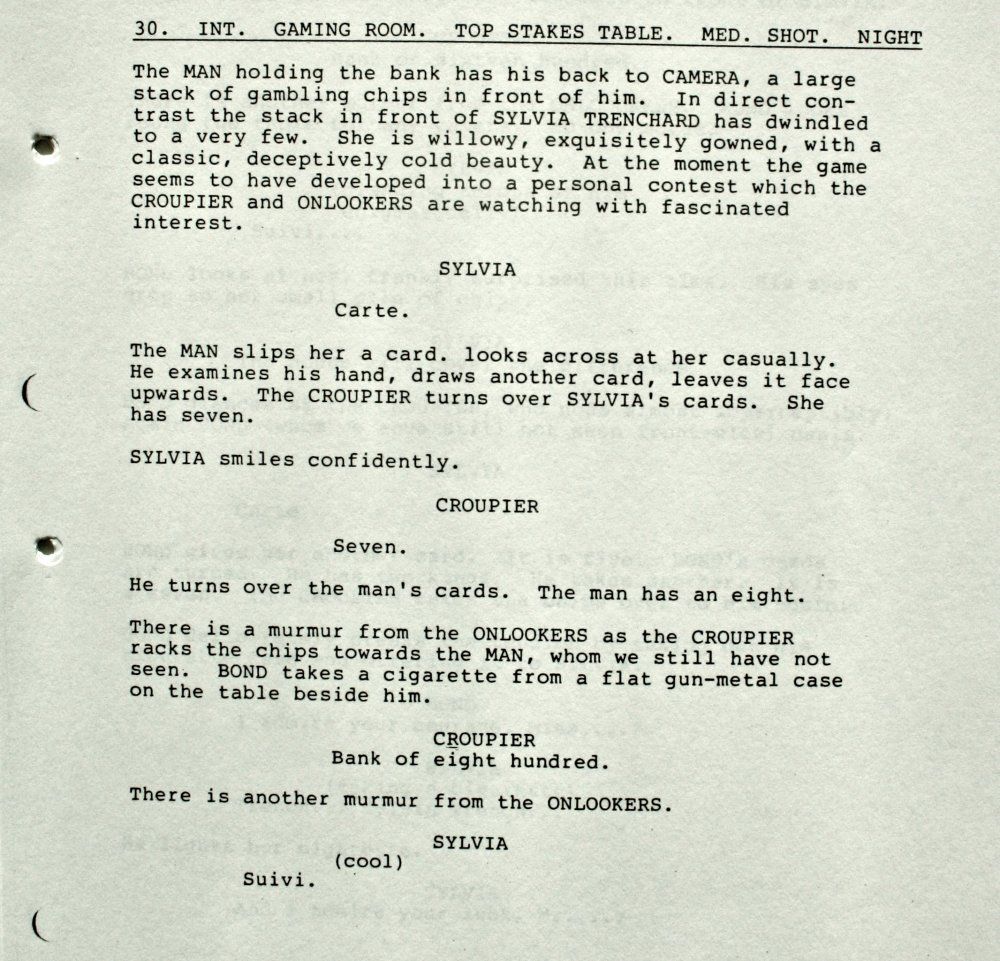 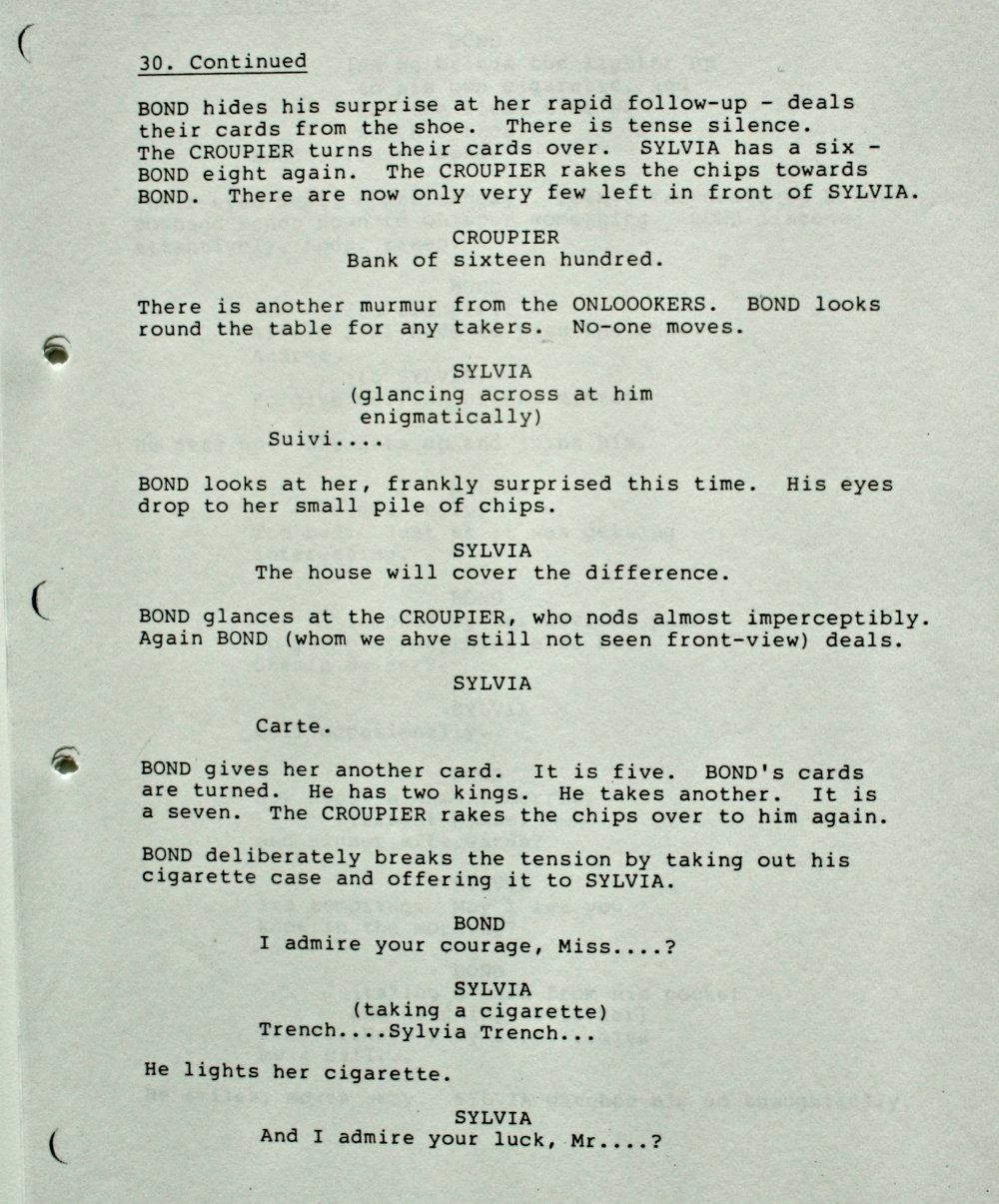 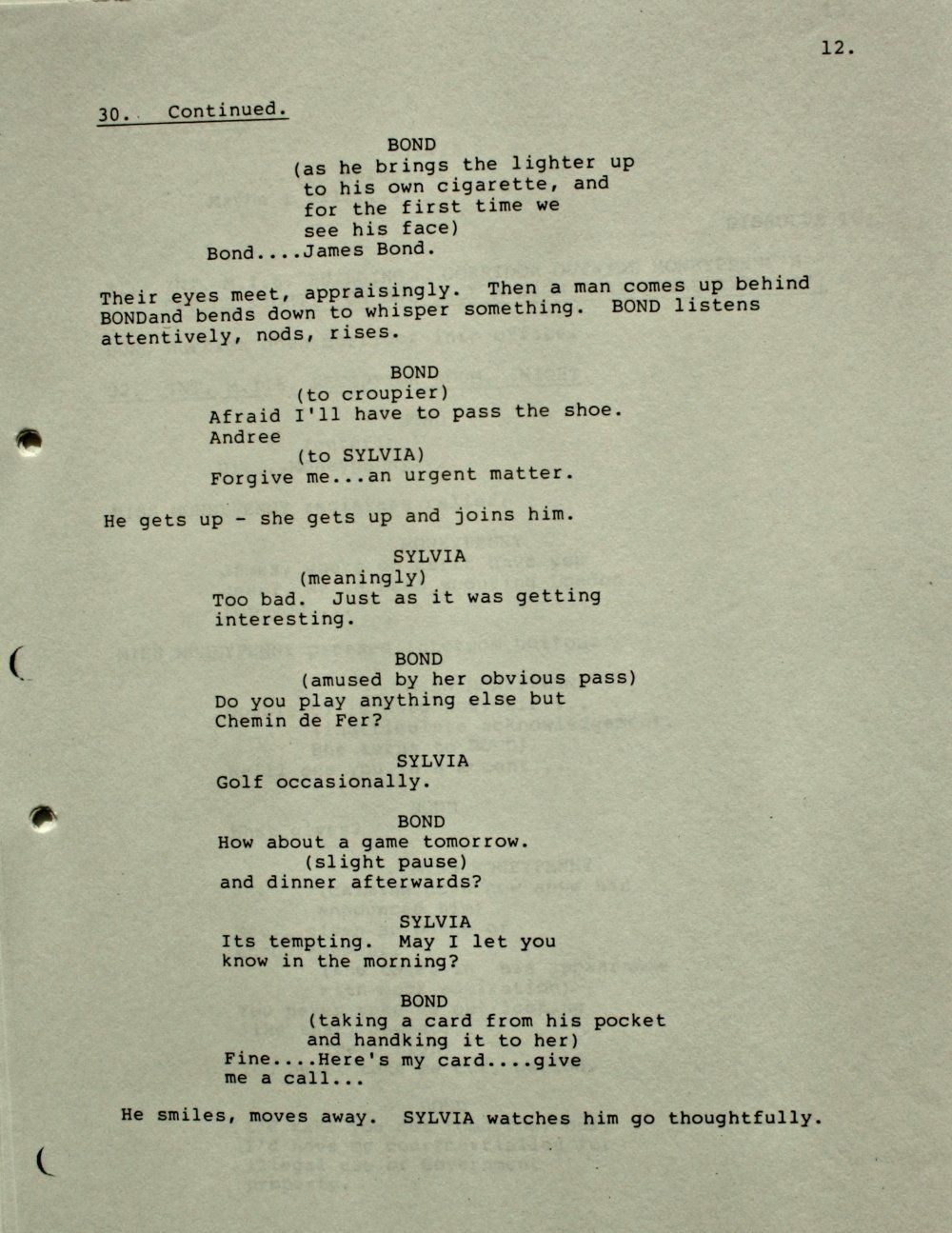