Indulging a creative and, to a degree, noble and socially responsible desire to shatter the nurtured illusion of violence in the westerns as idealized, innocent cowboys-versus-Indians gunfighting, Sam Peckinpah decided to take the subject in his own hands and show the world a piece of stylistically enhanced truth about what it meant to be an outlaw in the bloodthirsty days of the old West. Peckinpah’s idea of The Wild Bunch was to put the audience right in the middle of the brutality, bathe the viewers in blood and gore, terrify them and make a statement on the hunger for violence that hides somewhere deeply ingrained in human nature. Written by Walon Green and the director himself, developed from a story designed by Green and Roy N. Sickner, and starring the great William Holden, Ernest Borgnine and Robert Ryan at their all-time best, The Wild Bunch is a groundbreaking masterpiece of revolutionary historic value. The film’s inspiringly creative editing conducted by Peckinpah and talented youngster Lou Lombardo influenced the next generation of filmmakers, while the original use of cameras with different frames per second, with their footage later cut together like nothing the world had seen before, gave some crucial scenes the feeling of elasticity of time. Throughout the film Peckinpah weaves an underlying idea of the western era coming to an end, just like John Ford masterfully did in The Man Who Shot Liberty Valance, and he does it so efficiently that you get the feeling in your gut that what you have before you is the final relevant chapter in the history of the genre, the acutely disturbing and surprisingly honest closing lines of a story that gave us so many pleasures over the years.

We wanted to show violence in real terms. Dying is not fun and games. Movies make it look so detached. With The Wild Bunch, people get involved whether they like it or not. They do not have the mild reactions to it. —Sam Peckinpah

A monumentally important screenplay. Dear every screenwriter/filmmaker, read Walon Green & Sam Peckinpah’s screenplay for The Wild Bunch [PDF]. (NOTE: For educational and research purposes only). The DVD/Blu-ray of the film is available at Amazon and other online retailers. Absolutely our highest recommendation.

In his three-hour interview, Walon Green talks about his early years, and working for David L. Wolper and Jack Haley, Jr. on documentaries. He chronicles his time working for producer David Milch as a writer for Hill Street Blues, and what he learned about writing for television during his time there. Green talks about writing the feature film The Wild Bunch, and directing the documentary feature The Hellstrom Chronicle. He outlines then-more recent work, including his adaptation of Bill O’Reilly’s Killing Jesus, and episodes of The Man in the High Castle and Mercy Street. Adrienne Faillace conducted the interview in a joint venture with the Writers Guild Foundation on August 23, 2018 in Santa Ynez, CA.

Stephen Prince wrote in 1999, ‘The Wild Bunch is an epic work, and it has had an epic impact on American cinema’ and noted Martin Scorsese’s description of the film as ‘savage poetry.’ Paul Seydor has described the film as ‘one of the great masterpieces of world cinema,’ and then further notes that ‘any discussion of The Wild Bunch implicitly acknowledges the editing by Lou Lombardo and Robert Wolfe, so integral is it to the style, meaning, and effect of the film. Still, one should at least observe that the art and craft of film editing know no higher peaks than The Wild Bunch, and very, very few that are anywhere near its summit.’ Here’s in-depth script analysis by Paul Seydor. Sam Peckinpah’s The Wild Bunch (Cambridge Film Handbooks) is available from Amazon.

The making of the final shootout, an extract from The Wild Bunch: An Album In Montage, a documentary of the making of the film by Paul Seydor and Nick Redman. The occasion for the creation of this documentary was the discovery of 72 minutes of silent black-and-white 16 mm film footage of Sam Peckinpah and company on location in northern Mexico during the filming of The Wild Bunch. 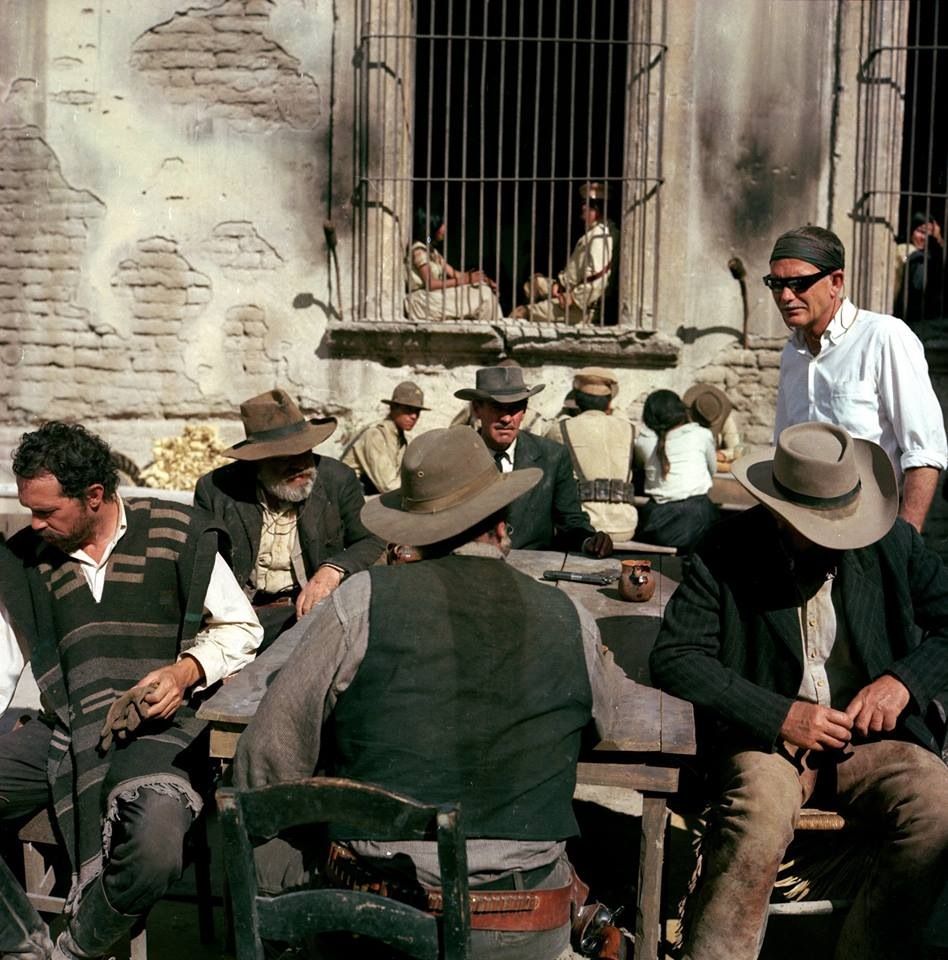 Todd McCarthy described it as, ‘a unique and thoroughly unexpected document about the making of one of modern cinema’s key works, this short docu will be a source of fascination to film buffs in general and Sam Peckinpah fanatics in particular.’ Michael Sragow wrote that the film is ‘a wonderful introduction to Peckinpah’s radically detailed historical film about American outlaws in revolutionary Mexico—a masterpiece that’s part bullet-driven ballet, part requiem for Old West friendship and part existential explosion. Seydor’s movie is also a poetic flight on the myriad possibilities of movie directing.’

Another extract from the Tyrus Entertainments documentary on the making of The Wild Bunch. 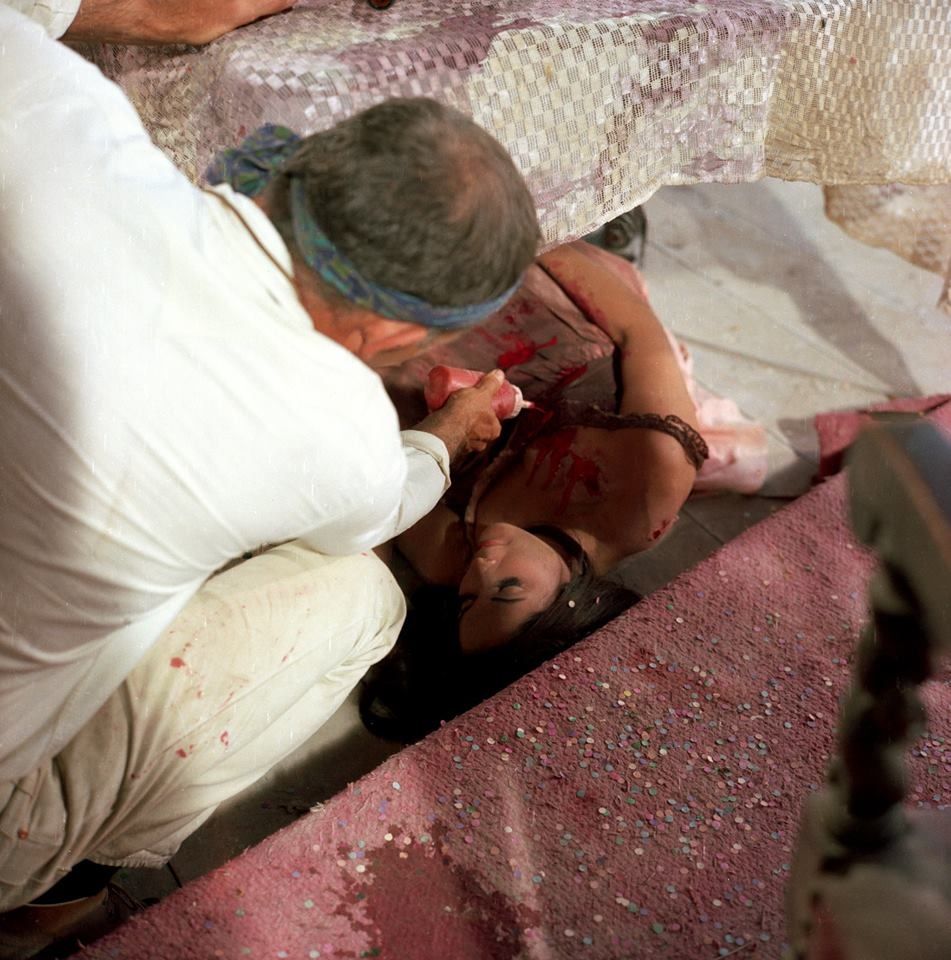 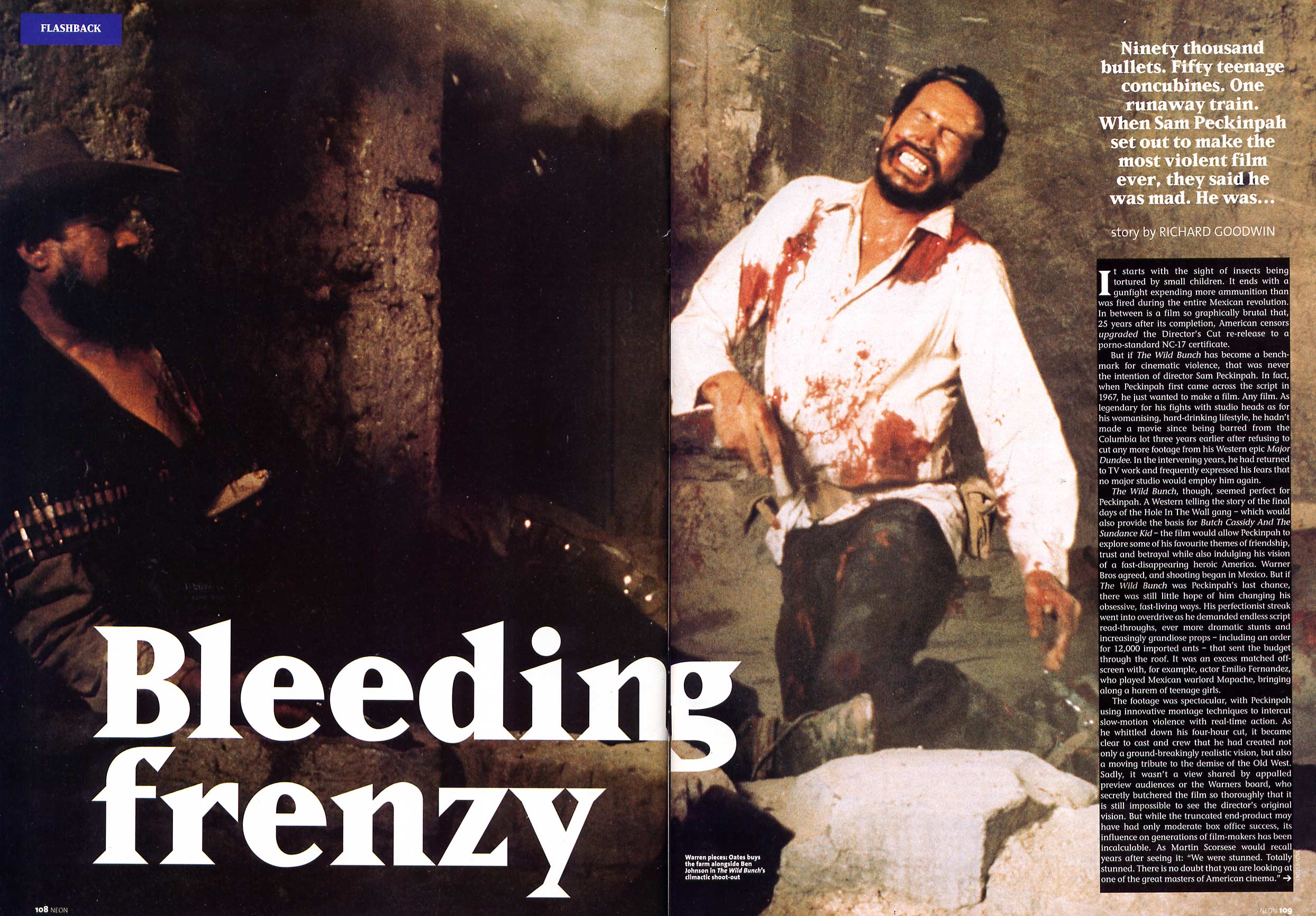 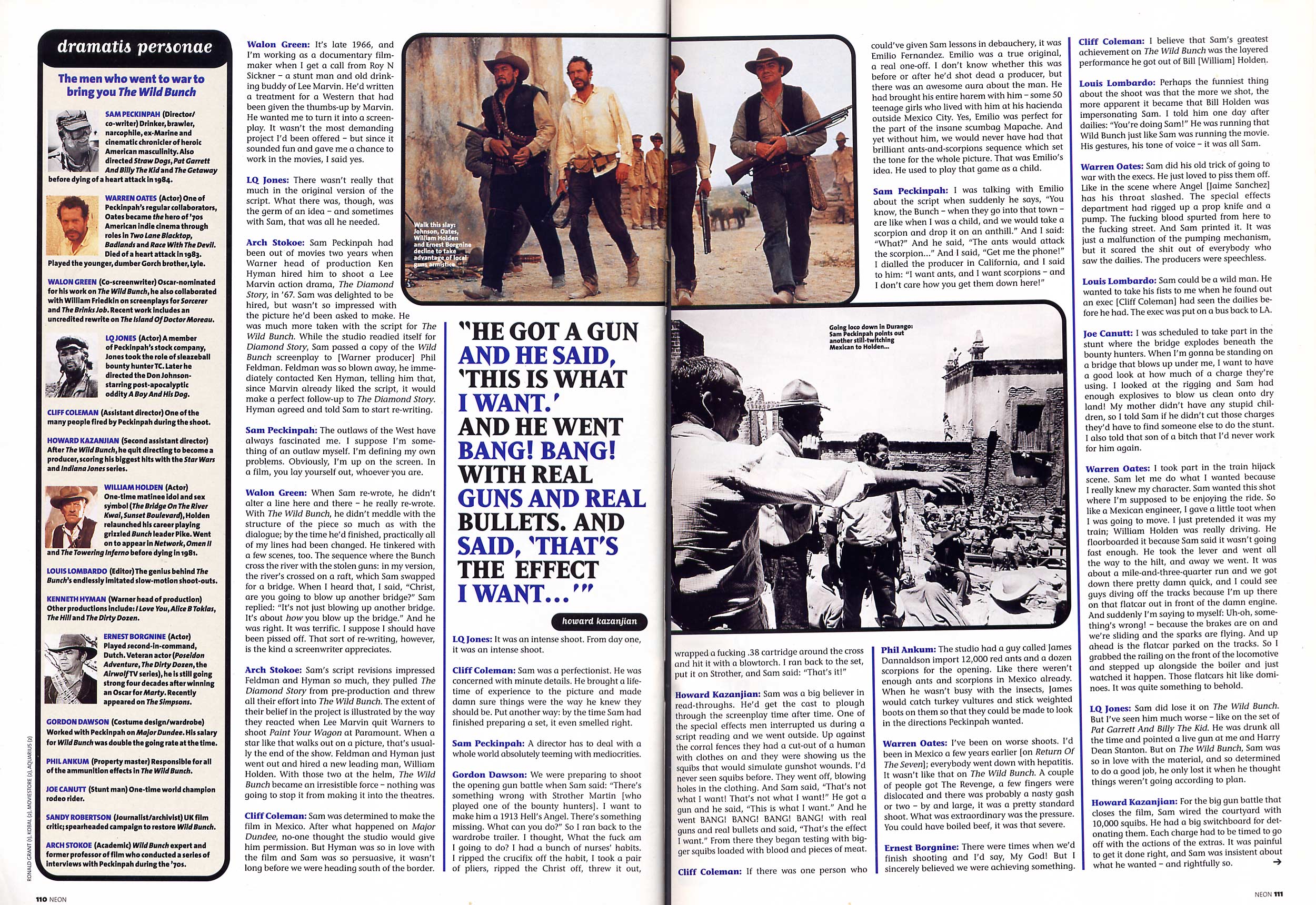 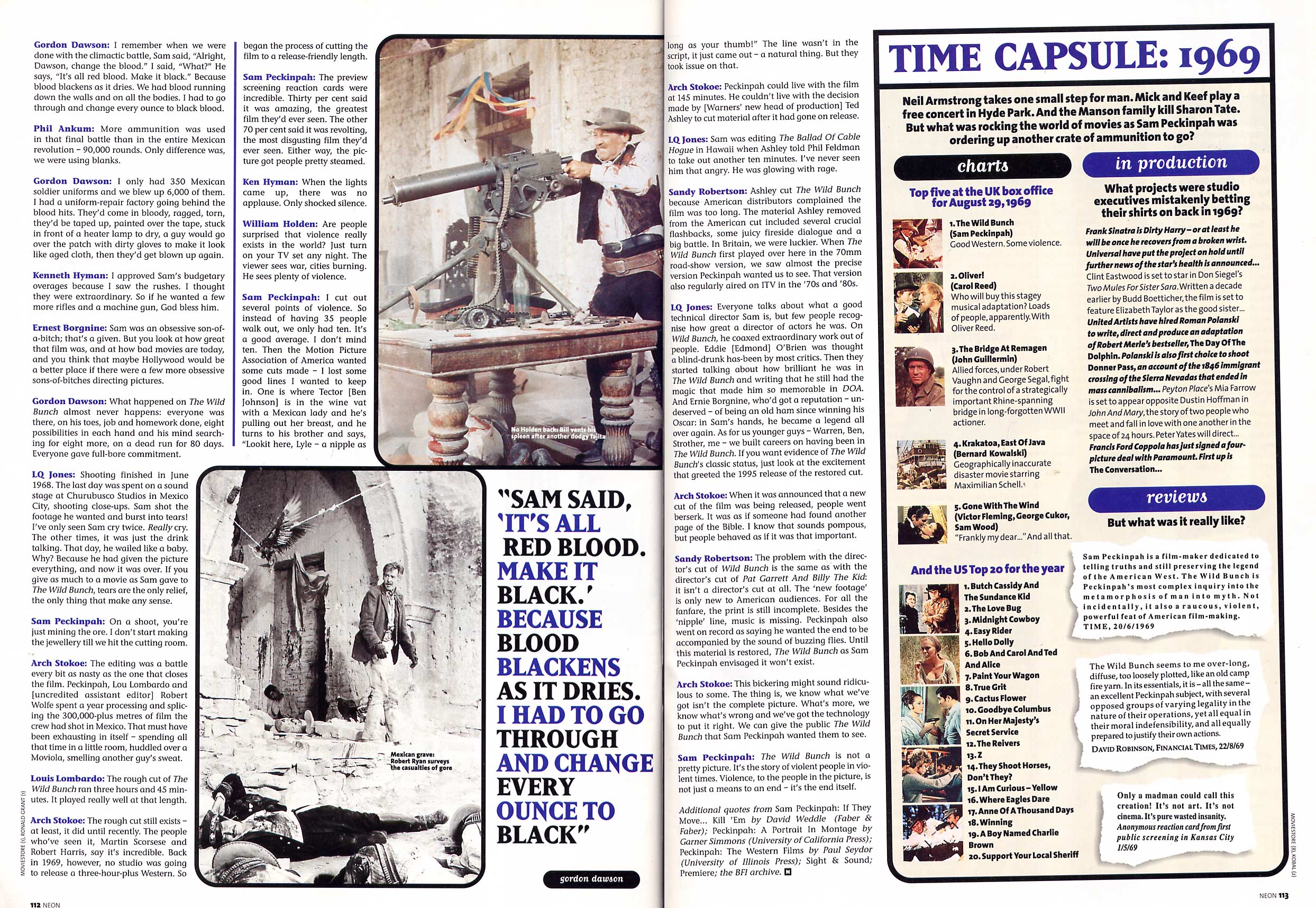 “I only have questions,” Sam Peckinpah tells Barry Norman in this seldom seen interview from December 1976. “As a filmmaker I must look at both sides of the coin, and do my best as a storyteller. I have no absolutes. I have no value judgments,” Peckinpah goes on to say, before asking, “Why does violence have such a point of intoxication with people? Why do people structure their day on killing?” This is an incredibly honest and brilliant interview with Peckinpah, who doesn’t flinch form any of Norman’s questions—discussing his ignorance, his mistakes—explaining why he was wrong in thinking it could work as catharsis in The Wild Bunch, and why he was “a good whore.” —Paul Gallagher

A rare behind the scenes look at legendary filmmaker Sam Peckinpah on the set of The Wild Bunch, 1969. Fascinating to see Peckinpah at work making this landmark film surrounded with a crew that all seem to be following him in not only direction but also in wearing cowboy hats and sunglasses. Photographed by Bernie Abramson © Warner Brothers/Seven Arts. Intended for editorial use only. All material for educational and noncommercial purposes only.