Hailed as one of Sam Peckinpah’s misunderstood masterpieces, Pat Garrett and Billy the Kid is the film that ended the filmmaker’s informal revisionist western trilogy, after Ride the High Country and The Wild Bunch. The creation of the story of an aging sheriff hired to kill his old friend Billy the Kid, however, was riddled with problems. Peckinpah fought a serious battle with MGM, whose president James Aubrey was reluctant to give Peckinpah the time or budget required to make the film the way he wanted. Tensions on set were further empowered by the employment of Bob Dylan in charge of the score: not only did Peckinpah’s usual composer Jerry Fielding find such a decision offensive, but Peckinpah later also claimed that he agreed to hire inexperienced Dylan only after considerable pressure from the studio. As if all this wasn’t enough, the crew had to cope with malfunctioning cameras and a sudden surge of influenza. The final product that was eventually showcased in theaters was a shortened version that both Peckinpah and a large part of the crew refused to acknowledge as the legitimate version they went through hell to complete. But Peckinpah worked weekends and during lunch hours, determined to fully convey his vision of Pat Garret’s story to the screen, and it took ten years for the rest of the world to see this hidden version. The imperfect, crippled MGM film wasn’t greeted enthusiastically, failing both with the critics and in the box office arena, but in 1988 the tables turned and a part of the injustice to Peckinpah was undone. Pat Garrett and Billy the Kid finally got the respect it deserved. Written by Rudy Wurlitzer and starring the great James Coburn and country music star Kris Kristofferson, with Dylan’s beautiful score, Peckinpah’s film deserves to stand side by side with The Wild Bunch as the troubled genius’ most consequential contribution to the western genre.

I didn’t pick anything. I’ve never picked any of my films. Except one, The Ballad of Cable Hogue. That’s the only movie I ever picked to do. I’m looking for a job. I’m a whore. I go where I’m kicked. But I’m a very good whore. —Sam Peckinpah, Playboy interview

A monumentally important screenplay. Dear every screenwriter/filmmaker, read Rudy Wurlitzerl’s screenplay for Sam Peckinpah’s Pat Garrett and Billy the Kid, the wildest western ever made [PDF]. (NOTE: For educational and research purposes only). The DVD of the film (two-disc special edition) is available at Amazon and other online retailers. Absolutely our highest recommendation.

When Bob Dylan learned that Rudy Wurlitzer was penning a script focusing on the Bonney-Garrett legend, he tracked the writer down and requested a meeting. “The script was already written when Bob came to see me in my apartment on the Lower East Side of New York,” Wurlitzer recalled earlier this month from his getaway home, a cabin in his beloved Cape Breton, Nova Scotia. “He said that he had always related to Billy the Kid as if he was some kind of reincarnation; it was clear that he was obsessed with the Billy the Kid myth,” a notion that was validated 34 years later in Todd Haynes’ multi-persona Dylan movie biography I’m Not There (2007). In the film Richard Gere assumes the Dylan shape-shifting persona of Billy, a bespectacled, enigmatic outlaw. Initially, Wurlitzer suspected that the elusive singer wanted to contribute an original tune to the score of the film but Dylan had other plans—he wanted to be in the movie, despite having no acting experience whatsoever. —Rudy Wurlitzer, Bob Dylan, Bloody Sam, and the Jornado del Muerto 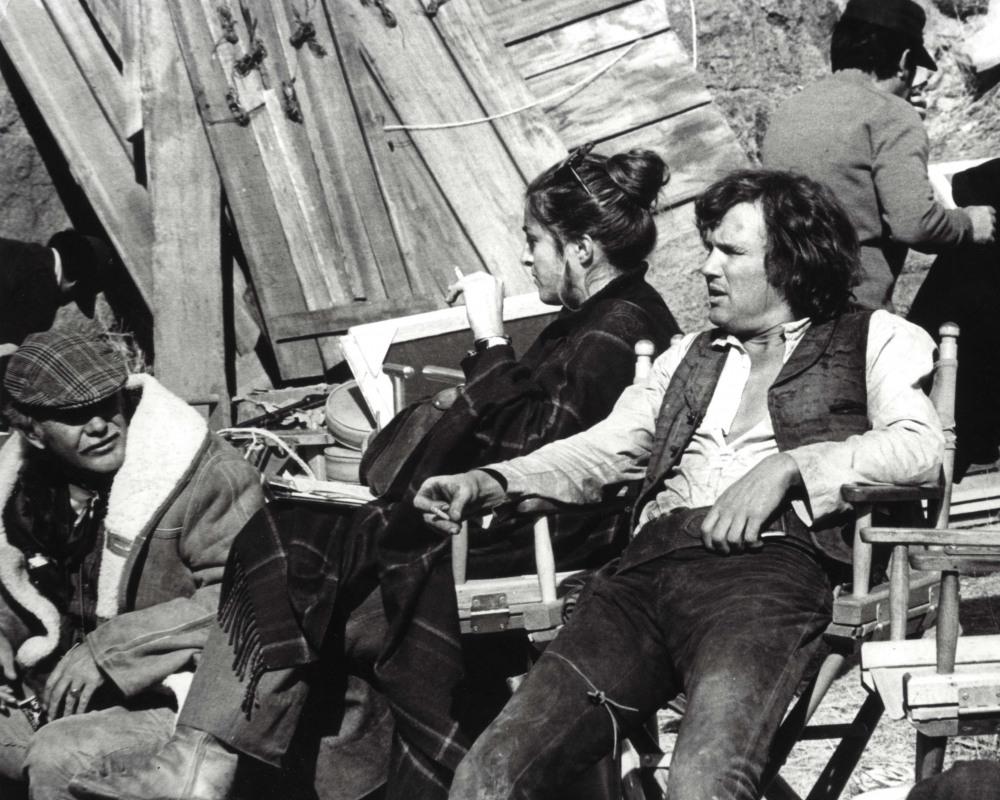 “Sam was drunk, of course,” recalls Kris Kristofferson, who plays Billy. “By the end of the day that bottle had taken over. I’ll never forget Bob Dylan turnin’ and lookin’ at me like, ‘What the hell have you gotten me into?’” Dylan wrote the songs for the movie, including Knockin’ on Heaven’s Door. He also has a small role as the mysterious printer’s assistant named Alias, who joins up with Billy and his gang. Rita Coolidge, Kristofferson’s girlfriend at the time, plays a Mexican woman whom Billy/Kristofferson makes sulfurous love to just before he’s gunned down by Pat Garrett (played by James Coburn), his erstwhile friend and mentor.

Peckinpah would start drinking on the set first thing each morning, and by the afternoon he would be loaded and walking around firing a revolver into the air. At night he’d lie in bed shooting at his reflection in the mirror, a drunken outburst that made its way into the movie when, after killing Billy, Garrett, in a bout of self-hatred and disgust, shoots to pieces his own reflection in a mirror. At one point, “I had to take a pistol away from Sam,” says Kristofferson. “He was worrying some people.” —How Kris Kristofferson, Bob Dylan, and a drunken Sam Peckinpah reinvented Billy the Kid 40 years ago

“He was a great, innovative craftsman of film, but his sensibility was unique, inimitable. Action filmmakers can use an impersonal, impeccably directed movie like The Getaway as a textbook. But whatever it was that possessed Peckinpah on the morning he dreamed up The Wild Bunch’s majestic walk is fundamentally unteachable. And it’s probably safe to say that no one will ever again make—or feel the impulse to attempt—a movie like his last Western, Pat Garrett and Billy the Kid (1973). In telling the well-known story of the lawman Garrett’s pursuit of his old friend Billy, Peckinpah slows the narrative to a fatalistic mosey—sleepwalk set to the tempo of faintly jingling spurs. The movie is, in its way, as daring as The Wild Bunch: There’s a lot of dying here, but in Pat Garrett and Billy the Kid, the deaths come one at a time, with mournful regularity. It’s the only one of Peckinpah’s films in which the director himself appears on screen: He plays a coffin maker. —Terrence Rafferty, Son of the West

Tell us about Sam Peckinpah.
Sam Peckinpah was a genius for four hours a day. The rest of that time he was drunk. He called himself “a working alcoholic,” but he was much more than that. I think the alcohol sort of quelled all the influences that were going on around him so he could really focus on what he was doing with the film. He would shoot with three cameras and just… do it. You never talked with Sam about things like motivation. I asked him one time, when we were doing ‘Major Dundee.’ I said “Sam, what is it that makes my character tick?” And he thought about it for a minute and finally said “Drier. Dry. He doesn’t give a shit.” And that’s who that character was! And that’s how I played him… It was really sad what happened to that picture. The studio took it away from him and re-cut it. We had a great knife fight in that picture, between Mario Adorf and myself. And it was a viscous fucking knife fight. While we were shooting it, people were yelling for us to stop! That’s how real it looked. It was a terrific piece of action, and it was cut from the film… the night it premiered at the Paramount theater, Sam saw the studio’s cut and was just devastated. His hands were shaking. He had half a pint of whiskey and dropped it. It smashed on the floor. And my wife at the time said “Sam, it’s okay, it’s only a movie.”

When you look at Major Dundee, it’s sort of like looking at the U.S. cut of Pat Garrett, which was also severely compromised by the studio. You can see there’s a masterpiece in there somewhere.
I agree, but what they call the “director’s cut” of Pat Garrett is actually just the television cut. Sam had the only true cut that he made, and that’s up in his archives in Sonoma. When he finished cutting Pat Garrett, it was taken away from him. This was Jim Aubrey at MGM and he was more interested in getting his hotel ready than he was in film. I think he really despised anybody who displayed artistry. He really like digging into them. When we started shooting Pat Garrett, I just finished shooting a film with Blake Edwards called ‘The Carey Treatment’ (1973) that Aubrey also took away and re-cut. And I said to Sam “This guy’s crazy! He could do this film all sorts of harm.” Sam said “Don’t worry about a thing, Jim. I just bought one share of stock in MGM, and if they mess with me, goddammit, I’ll sue their asses!” (laughs) “One share of stock, Sam?! What’s that gonna do?!” “You’ll see.” (laughs)

I heard a story that Peckinpah got drunk during the shoot and didn’t want to kill Billy! True?
Yeah, but he wasn’t that drunk. We were sitting in his trailer and he said “Goddammit! Why do we have to kill him?” “Well Sam, that’s the way it happened.” “Well, why can’t we make it un-happen?” “Sam we can’t do it.” (beat) “Why… not?!” (laughs) I think he saw a lot of himself in the character of Billy… We found out halfway through the shoot that most of the masters we had shot were out of focus. We were using five or six cameras at once and we didn’t have a camera mechanic because MGM wouldn’t pay for one! So we used different lenses, different set-ups, and still, it’s all out of focus.

Finally the camera mechanic is sent out. It turns out the flange in the camera was off by one one thousandth of an inch, or some damn thing. So we tell Aubrey that we have to re-shoot all these masters. He says “You’re not gonna re-shoot anything. The audience isn’t gonna know the fuckin’ difference!” Can you imagine?! It was just mind-blowing! So what we did was, we stole all those shots when the brass didn’t know we were shooting and got it all! So now this really pissed them off, because now we had some real film on our hands! (laughs) So Sam had his cut previewed, and at the same time, Aubrey had his guys cutting their film. So all the editors got together and gave Sam a cut of his film, but without a soundtrack. He didn’t get that back until he cut it for television. But there’s only about five minutes missing from that cut he originally made. —James Coburn: The Hollywood Interview

Listen to the audio interview with Sam Peckinpah (MP3 format, approximately 48 minutes) conducted by Tony Macklin. The Peckinpah interview was conducted in his living quarters at Burbank Studios. Published in the Summer 1976 issue of Film Heritage.

Sam Peckinpah opens up on the purpose of violence during a heated BBC interview from 1976: “As a filmmaker I must look at both sides of the coin, and do my best as a storyteller. I have no absolutes. I have no value judgment. Why does violence have such a point of intoxication with people? Why do people structure their day on killing?”

Here are several photos taken behind-the-scenes during production of Sam Peckinpah’s Pat Garrett and Billy the Kid. Photographed by N/A © Metro-Goldwyn-Mayer (MGM). Intended for editorial use only. All material for educational and noncommercial purposes only.