In 1961 Roger Corman made the best and most important film of his career and one of the most vital, incendiary, political and unfortunately prescient American independent films of the last fifty years, The Intruder. Based on the 1959 novel of the same name by Charles Beaumont, the story takes place in the Deep South just after the Supreme Court decision that ordered schools to integrate. The story follows Adam Cramer played by William Shatner in one of his first starring roles as a racist rabble rouser who whips the inhabitants of a small southern town into an anti-integrationist frenzy. Roger Corman took the book to his studio American International Pictures and they passed. Roger was surprised that the company he had made so many pictures for, all of which had made a profit, would pass on a project he felt so passionate about. They wanted him to stick with the Drive-In exploitation fodder which had made his career.

Roger then took the property to all the other studios in town. Every one of them passed on The Intruder. Hollywood has never been known for its social courage or, for that matter, its imagination. For a town built on the ethos of imagination it rarely uses it. Hollywood is an industry and like all industries it is focused, built, and manufactured to make money. No one knew this better than Roger Corman. He was a producer that spent so little overhead on his pictures that within a week of release one of his films was already in profit. But The Intruder was something that spoke to Roger’s soul. It was happening right then and there and someone needed to document this moment of American history so he enlisted his brother Gene Corman to come onto the project as producer and according to William Shatner they both mortgaged their homes to finance the eighty thousand dollar film themselves.

The Cormans shot the film in Charleston, Missouri. This was 1961, when schools throughout the South were still forcefully integrated. This was less than five years after President Eisenhower had to call out the National Guard to escort black teenagers into Little Rock High School. The entire cast and crew was housed in a small motel just outside of town for the three week shoot. The day the company arrived they were greeted by a policeman, who advised Corman to, “Take a few minutes and plan an escape route.” When Corman made the deal with the town he did not share the script or really tell them what the film was about. Somehow the plot leaked and the town began to plan against the film company. The only integrated group in the whole town was a prison gang and supposedly this gang had been hired to kill the crew and cast in their motel rooms while they slept. Undaunted, Corman soldiered on and convinced his young leading man that he too would be okay. “Nothing will stop us from making this picture,” Roger declared and, with it being his own money on the line, you can be damn sure he meant it too.

There were only five professional actors in the cast. To save money the Corman brothers hired locals to play the minor roles. It is this bit of manipulative genius that gives the film a real edge. You can tell that these are not actors and every crease and wrinkle on their faces held a map leading to all the history that comes with that region. Good and bad. What Roger did was to give them a fake script that didn’t include some of the more inflammatory language and scenes. Shatner’s character worked for the Ku Klux Klan and he gives one of his greatest performances with this role. He gives extraordinary speeches of racist vitriol on the steps of the town’s courthouse. Pages and pages of dialogue Shatner would recite screaming until he came down with laryngitis. One scene in particular there were over three hundred extras listening to Shatner’s character’s manic ideology. Corman, being the savvy producer he is, decided to shoot over Shatner’s shoulder first so he could retain the expansive crowd before they got bored and left and to save his leading man’s voice. In order to get the crowd to react to Shatner’s speech Corman began to chant, “Let’s go, Missouri Tigers! We love the St. Louis Cardinals! Let’s hear it for the red, white and blue!” When Corman needed the crowd to get angry he asked, “How do we feel about the University of Alabama football team?!” The three hundred extras became rabid with rage and Corman made his day and saved his star’s voice.

Roger Corman received daily death threats while making this picture so he saved the most harrowing scene of a massive Ku Klux Klan rally and parade for the last night. The entire crew and cast checked out of the motel and as soon as they wrapped the scene they got into their vans and made an exodus to St. Louis. Roger set his mind to making The Intruder as true a piece of cinema as could be conceived at that time putting his own financial and physical well-being on the line. He did what he wanted to do and stuck it to the racist powers that be. Now back in Los Angeles he came across his next hurdle, who would distribute this film? 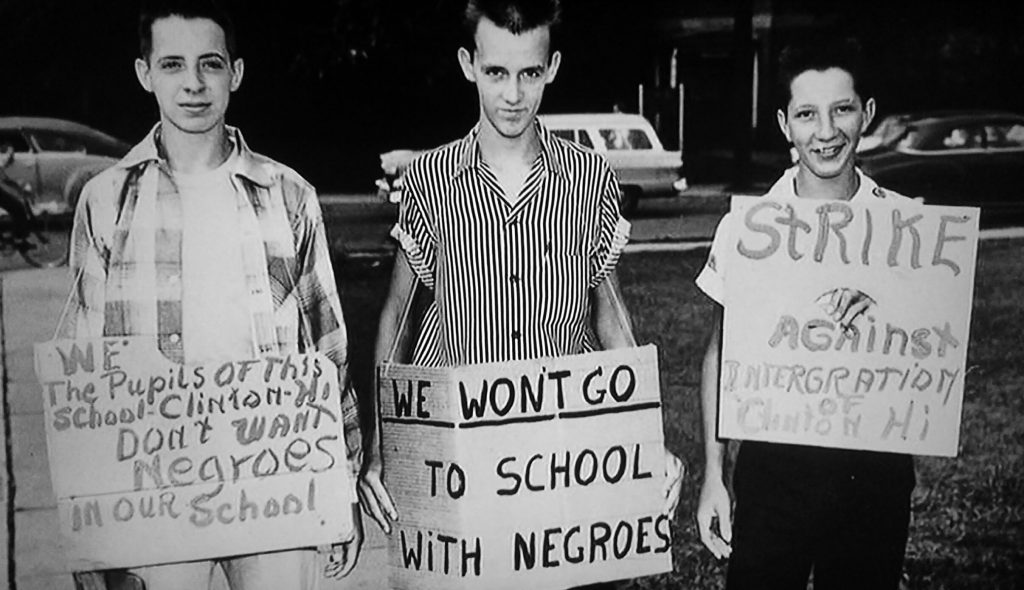 When The Intruder was first screened in Los Angeles a riot almost broke out in the theatre. People were screaming that the Corman brothers were communist! When the film did have a minimal distribution deal it got some good reviews in the major territories. The Los Angeles Times wrote that it was “boldest, most realistic depiction of racial injustice ever shown in American films.” William Shatner was only paid two hundred dollars after expenses for his role, but he garnered awards and he became a film star. Yes, folks, Captain James T. Kirk owes his career to Roger Corman, as does much of Hollywood.

The Intruder was not a financial success and is the only one of his three hundred and eighty plus films to lose money. This fact puts a lump in Roger’s throat to this day. But here is recourse that far outgrosses any financial profit the picture might have engendered. Roger Corman with The Intruder made a film so socially conscious when released in 1961 that it still resonates today at the dusk of the year 2014. He put his life on the line to make this film. That risk is rewarded today as history plays out on the evening news in a horribly repetitive cycle. He made a film that highlighted the truth that not everyone born or brought to the “land of the free and home of the brave,” is in fact, “free to be brave.” For this we should all thank Roger Corman.

In the spring of 2014 I was at an art show inspired by the works of Roger Corman and Joe Dante’s films. As I stood transfixed by a brilliant artist’s rendition of The Intruder poster, standing next to me was a lovely woman who said, “That’s Roger’s favorite film.” I turned to see that it was Julie Corman, Roger’s better half, making the comment. I smiled and said, “Mine too.” That was the one poster I wanted at the show and I was outbid at the auction by… Roger Corman. It might be the first time in history that Roger ever outbid anyone for anything. 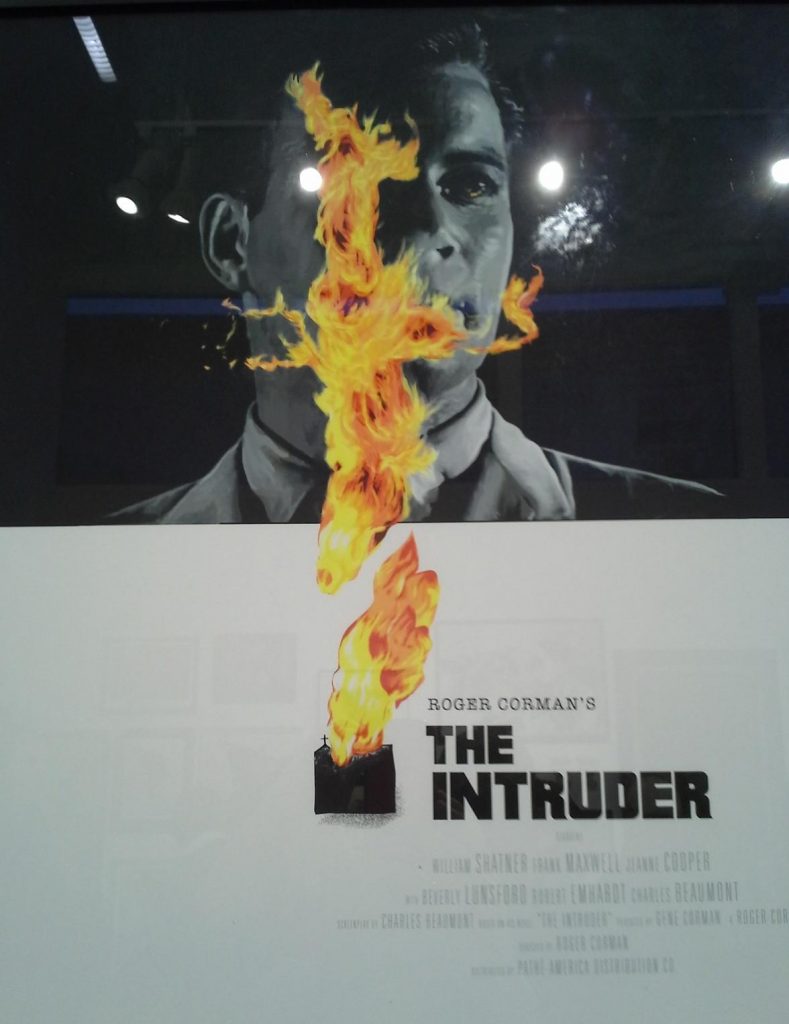 The beautiful fan-made poster which hangs in Roger’s office

On behalf of all the Children, Women and Men who have lost their lives and still to this day are losing their lives because of the color of their skin I want to offer my most sincere appreciation to Roger Corman for having the conviction to stand up to the fear and hatred that permeates our culture by diving into the front lines and exploiting them. “The King of Exploitation” gave a voice to those that are being abused and exploited.

He didn’t just make a film to make a buck; he created a social document that will go down in the history of cinema as a landmark achievement.

So, thank you, Roger Corman. Thank you.