This is one of the intrinsic life lessons Martin Scorsese learned during the making of Raging Bull, his eighth feature as a film director. This picture came to him just as he was battling his own demons in the ring of life. After the experiment and failure of New York, New York in 1977, he made the documentary of The Band’s farewell performance entitled The Last Waltz. At the time this was what Scorsese called his perfect film. In the years following Taxi Driver he was searching for a new artistic muse. Searching for the answer to the question many great artists ask, ‘what do I want to do within the chosen medium?’ He was doubting himself at every turn. Not trusting his inherent instincts or his natural genius. He wasn’t sure he could tell stories on the canvas that had begun to transform after the birth of the summer blockbuster in 1975 with Jaws. Where did he stand in the midst of great white sharks, droids and comic book heroes coming to life and making audiences believe that a man could fly? Was there still room for the stories he wanted to tell? More to the point, what story did Scorsese want to tell? Feeling he had lost the spark that helped create Mean Streets and Taxi Driver, this emptiness left a void in his soul. He was not sure why he was here or what he had to offer cinema anymore. It should be noted that Scorsese is a huge fan of the aforementioned blockbuster films, especially Star Wars. “When I saw that picture opening day at the Chinese Theatre, like the rest of the audience, I was blown away by the genius of George Lucas. We were completely transported to another time and place. I also knew that my picture (New York, New York) was finished.”

So to fill that void, and block his self-doubting, Scorsese turned to intoxicants. After both of their wives kicked them out, Scorsese ended sharing a home in the Hollywood Hills with Robbie Robertson. They were simpatico and living the high life, with the windows blacked out so they could screen films all day and all night. After a “skiing binge” in which he stayed awake for almost seven days, Scorsese ended up in the hospital. He awoke to find his family and friends surrounding his bed. He was alive and not sure why or how. As the congregation left his hospital room, Robert De Niro quietly walked up to his old friend and collaborator and handed him a paperback book. It was ‘Raging Bull,’ a biography of boxer Jake LaMotta. The same book De Niro had tried to persuade Scorsese to make six years prior. The director rejected the idea stating that he knew nothing about sports and had no interest in boxing. Yet, after recuperating for days and waking surrounded by family and friends, Scorsese came to the realization that he himself in essence was a fighter in the ring of life and that for the past three years he had been fighting his toughest opponent, himself. Scorsese turned to De Niro and said three words, “I’ll do it.” 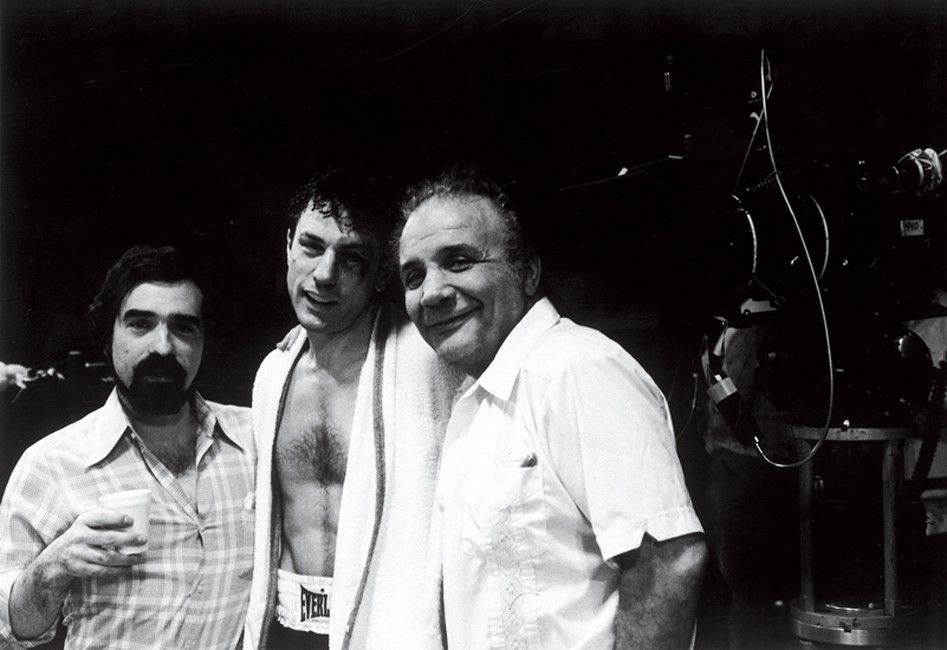 Over the years since De Niro first gave the book to Scorsese there had been two drafts of the script written. The first by Scorsese’s college friend and co-writer of Mean Streets, Mardik Martin, and the second by Taxi Driver scribe Paul Schrader. For both Scorsese and De Niro these drafts were lacking in some essential truth that they needed to convey. This was a biographical film, but it was still “a film,” one based on real characters but they needed to be inventions of a sort. So De Niro and Scorsese flew down to St. Martin and in a month they rewrote the script. What we see on screen is their screenplay although because of WGA regulations they could not be credited. In a way Scorsese had been given a second chance at life and, now sober, he had found that spark that lit the flame of his most personal pictures. It was time to redeem himself to his family, friends and the film industry but most importantly it was time to redeem himself from himself. It was a chance to explore the shadow side of man, the grey of the black and white world. That the human condition is much more complex than just the ideology of, there are good people and there are bad people. Having passed through this inferno and coming out on the other side alive, Martin Scorsese knew how to tell this story of a very destructive man from both the objective and the subjective point of view. Who better to tell a war story than a veteran, and Scorsese was about to create his masterpiece of one man’s inner battle with himself.

Scorsese in the cutting room

A key technical collaborator I would like to focus on was Sound Editor Frank Warner. Scorsese had worked with him on Taxi Driver. Warner received an Academy Award for his work on Steven Spielberg’s Close Encounters of the Third Kind and had one of the largest sound libraries in the independent field with almost a million feet of film of his original recordings. When Warner began to see the assembled scenes he began to get ideas. Unorthodox ideas for sounds that one would not think at first would be appropriate for a boxing picture but what Warner noticed was that the way Scorsese had shot and edited the boxing scenes was incredibly unorthodox and original compared to any previous boxing picture seen before, or since. The fight scenes were almost sacramental with the use of slow motion photography and staccato flash bulbs that hit the viewer like a machine gun blast. These fight scenes were hitting the viewer with heightened sense of reality. It was true cinema. It was the photograph of the photograph of reality. A documentary of the soul that now needed appropriate sound effects to take it to the next level, an almost psychedelic aural realm.

Frank Warner used animal sounds to heighten the primordial act of pugilistic violence on screen. Let’s face it, there is nothing more primal than two men in a ring beating each other up. So Warner intercut the sounds of an elephant braying just as LaMotta is about to punch an opponent and when he does finally knock Sugar Ray Robinson down we hear the shutter of a horse. Warner manipulated the sounds by hand slowing them down and playing them in reverse. Sometimes beautiful accidents would occur when his hand would slip and he came across a sound that he would never have come up with on his own. One such accident was when he heard the sound of dry ice sliding down a pane of glass. It created the most horrific screech and Warner used this to accent and heighten the sounds of female screams. Specifically when LaMotta beats up his brother Joey played by Joe Pesci. You can hear the screech underneath the screams of the women trying to stop Jake from killing his brother. It is this sound design that makes the scene so much more violent and traumatizing on an aural level. Again, this is sound design that is highlighting the state of mind of the film’s central protagonist, bringing sound to the shadows of pain and brutality. 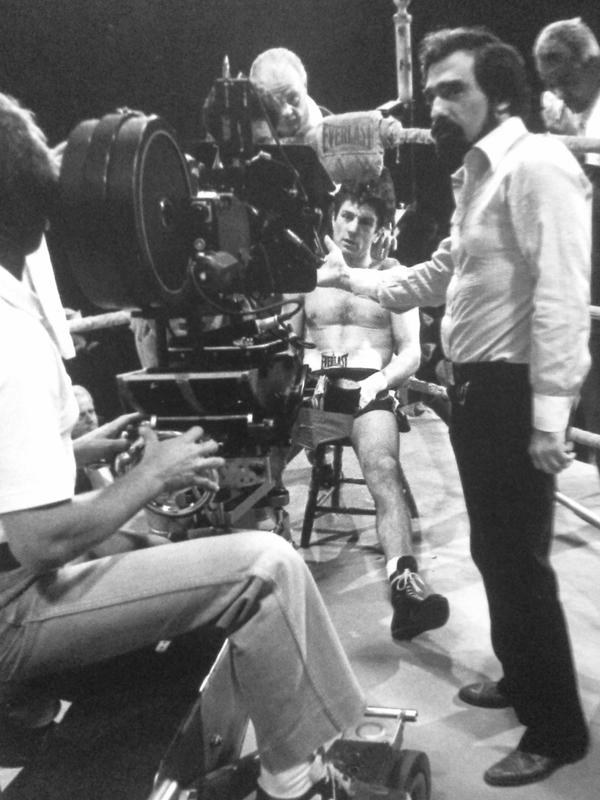 The sound of the flashbulbs to this day are a bit of a mystery as to what they are comprised of. Warner has stated that each flashbulb cue was comprised of five to six separate sounds. He has never told anyone what those sounds were and he burnt all of his negatives after the film was completed. One would think he did this so that others could not use them; but no, it was so that he never used them again, “Those were Marty’s flashbulbs and they will always be Marty’s,” he stated in an interview.

Scorsese was obsessive about every detail of this picture. Again, this was his redemption which might sound pretentious but Scorsese also thought that this was his second chance, his Lazarus moment to prove that he could rise from the dead and make a personal picture once again. He mixed the film for almost a year and had a trailer parked behind the stage where he slept. Seven days a week, from eight in the morning to eight at night he mixed the film. Finally producer Irwin Winkler took the film away from him stating that they needed to make prints because the picture opened the following week in New York, Los Angeles and Toronto. Scorsese was incensed that he could still not hear an extra’s line of dialogue in the Copacabana scene ordering, “a Cutty Sark and water.” Scorsese had a fit and threatened to take his name off the film if it was taken away before this line was made audible. Winkler shrugged and said, “alright, it’s no longer a Martin Scorsese Picture,” and took the film away from the director. This is how much every frame meant to Scorsese. 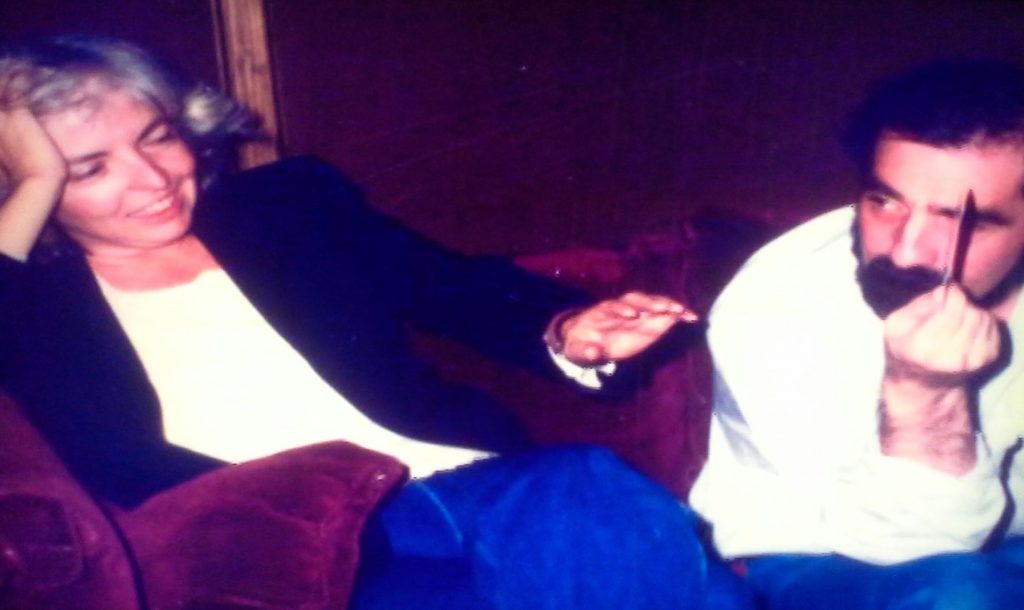 Thelma Schoonmaker and Scorsese during the mix of the film

When the film opened in New York Scorsese and Winkler went into the theatre and were horrified by the terrible sound. Marty almost fainted and Irwin Winkler rushed over to the theatre owner and said “what is wrong with your sound system?!” The theatre owner replied, “what do you mean, I just went to Radio Shack and bought four new speakers at $59.95 each!” 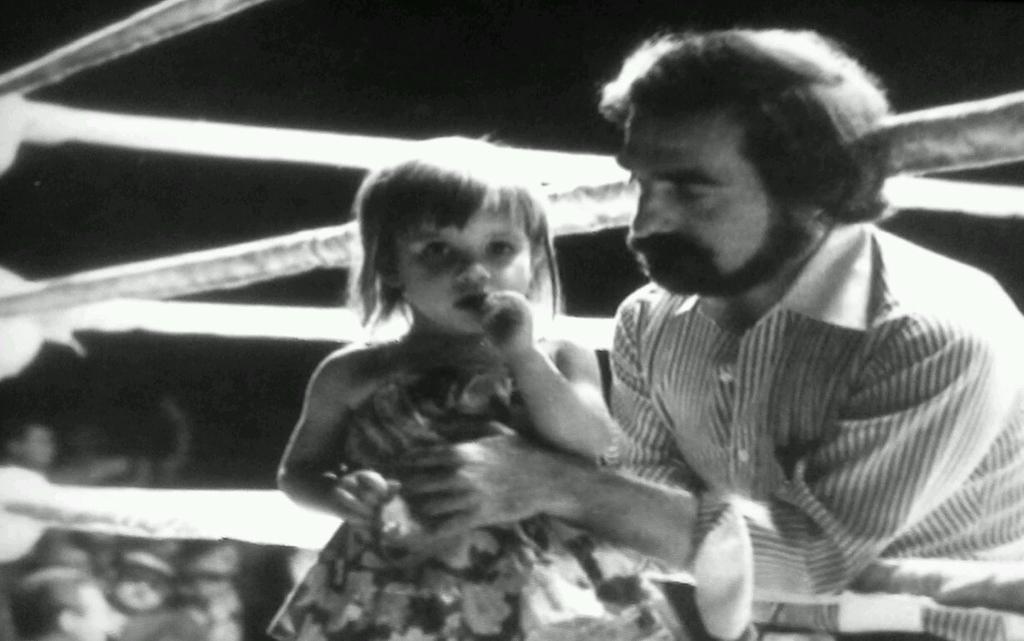 Scorsese brings his young daughter Domenica to the set

The film would go on to do mixed business and garner Academy Awards for Robert De Niro and film editor Thelma Schoonmaker, but noticeably NOT Scorsese. But, Raging Bull is a film that is in a way a Rorschach test on the audience. What baggage you bring into the theatre from your own life somehow is translated onto the screen. It is as if the film made by strangers has tapped into a deeper state of consciousness. A state of highlighting the deepest, darkest parts of the human condition. At the end of the decade Raging Bull made almost every critic’s top film of the decade list, and many of them in 1980 did not like the film. Time can flatten perceptions and opinions. Raging Bull is a motion picture that on every level explodes with superior craft. This is one of the greatest American films ever made and it saved the career and life of a director who was, “once blind, but now can see.”