Back in 1983, an American heavy metal band called Quiet Riot absolutely exploded. After years of being shunned by record companies, after years of struggling and extremely frequent changes in their line-up, in ’83 it all changed. Their American debut album Metal Health was a huge success, they became instant rock stars in the true meaning of the words. As years passed, and the lead singer Kevin DuBrow alienated himself from the rest of the band and particularly from his best friend, the Quiet Riot drummer Frankie Banali, the band practically faded into oblivion, resorting to playing at country fairs for a couple of hundred enthusiasts in the audience. DuBrow spent some time outside of the band, expelled for his behavior then brought back in, and as Quiet Riot succeeded at finding their groove once again, DuBrow unexpectedly died from a drug overdose in 2007. Regina Russell’s documentary, entitled Quiet Riot: Well Now You’re Here, There’s No Way Back tells the story of Frankie Banali, his efforts to put the band back together, at the same time passionately exploring the band’s turbulent history.

The documentary sheds a lot of light on the history of the band. By showing their beginnings, by illuminating the ties that kept the band together for all those years—first and foremost, the friendship between DuBrow and Banali—and by honestly portraying Quiet Riot’s ups and downs, the film engulfs you in the story of these remarkable people. Not remarkable because of their musical talent, even though some of the band’s songs are now considered true classics of the eighties, but remarkable because of Frankie Banali and his determination to persevere, to keep doing what he loves and, besides cooking and parenting, seemingly the only thing he’s good at. Ms. Russell interviewed a lot of musicians and people from the industry that were in the front rows when Quiet Riot burst into fame and fortune, giving the story a much needed air of authenticity, but it would be a mistake to consider this historical accuracy as Russell’s documentary’s greatest asset. What we find at the heart of the film is the story of Banali and the intriguing questions it poses.

As we witness the charismatic drummer work his way to getting the boys together again, while simultaneously seeing the most emotional and darkest periods of both his and the band’s existence, we realize it’s not just a documentary on a has-been successful band. It’s a film about people. Humanity, warmth and compassion are dominant here: as we watch Banali asking late DuBrow’s mother for her blessing before bringing Quiet Riot back to life, as we see him struggling with a lot of criticism that headed his way as soon as he made his decision about reuniting public, and especially as Banali frankly looks at the camera, with tears on his cheeks and what we consider to be a sure trace of desperation and loneliness in his eyes, unable to explain why he’s continuing to play in any words other than—it’s what I do.

His inability to let go, to resort to a daily routine of making breakfast and walking the dog, isn’t sad or depressing at all. Clinging onto shining moments from the past is hardly a habit reserved only for musicians, actors or former sportsmen. It’s a universal emotion, typical and easy to be found in people from all walks of life. This gives the film a fine dose of unexpected warmth, and we suddenly find ourselves to be emotionally attached to the protagonist, sharing the burden of his fears, expectations and inner struggles.

When we discuss QR: Well Now You’re Here, There’s No Way Back, we’re not talking about some kind of a backstage peep into the lives of a couple of artists, as it often comes down to in documentaries about bands. Just like all the best movies the documentary genre has to offer, it poses questions and tackles themes close to home for many of us. Friendship, loyalty, the sense of being lost in a constantly changing world, fanatic determination in times when most people would probably give up. It doesn’t matter that it’s been three decades since Quiet Riot were at the top of their game, it doesn’t matter that the steady decline in the years that followed had a big impact both on their emotional state and their financial situations. Banali is still the same guy he always was, a drummer with rock humming through his veins. This film is a love poem to both music and this particular band, but a poem that steers clear from cheap sentimentality and superficiality, having more soul and gut than most similar projects we’ve seen so far. 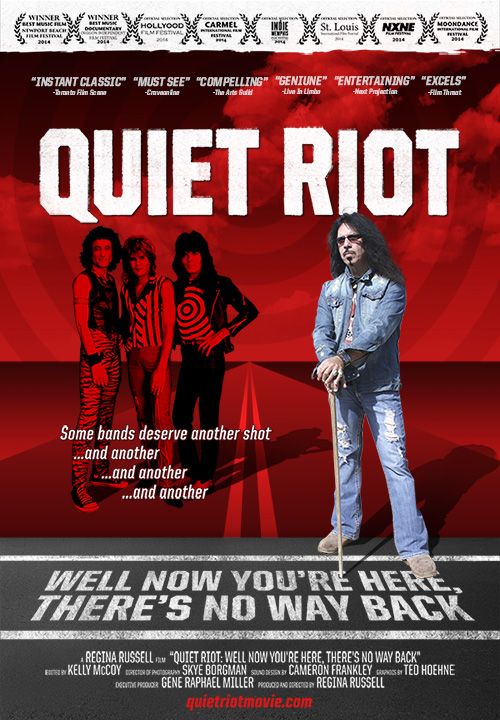