Back on the Croisette for the Cinéma de la Plage screening of Pulp Fiction (1994), as the film marks its twentieth anniversary, Quentin Tarantino gave a press conference before a packed room of enthusiasts. The Film Stage’s Nick Newman breaks down his conversation.

“It means much, much more than the 50th anniversary of the birth of the spaghetti western. To me, the 50th anniversary of a Fistful of Dollars means not just the birth of the spaghetti western — which it is, undoubtedly — but it’s the birth of genre action cinema as it’s become to be known ever since the event of Fistful of Dollars. […] Where music was present not as background, but as foreground. But even more importantly, the movie was cut to music, which had never truly been done before except in rare circumstances, like maybe Preston Sturges‘ Unfaithfully Yours. But the thing is, what we all associate with kinetic, genre, action-making cinema was pretty much born the day Fistful of Dollars was born.”

Starting with birth, continuing with death

“Digital projection and DCPs is the death of cinema as I know. It’s not even about shooting your film on film or shooting your film on digital. The fact that most films now are not presented in 35mm means that the war is lost. Digital projection, that’s just television in public — and, apparently, the whole world is OK with television in public, but what I knew as cinema is dead.”

On maintaining his own archive

“I’ve never counted how many prints I’ve had since I don’t think I’ve wanted to put my obsession under than harsh a microscope. But I have a pretty terrific 35mm collection and an even bigger 16mm collection and I screen them all the time. I’m always watching movies and everything. One of the nice things about my life is because I’ve done fairly well in cinema, it’s actually afforded me to almost live an academic’s life. So my feeling is that I’m studying for my professorship in the history of world cinema and the day I die is the day I graduate. I’ll just get on a kick of study of some sorts whether it’s a director whose work I’m not familiar with, like say Dorothy Arzner or a director I decide to rediscover like George Roy Hill or it’s a genre of cinema or it’s a country of cinema. Then I just explore. I voraciously watch them and make notes on them, maybe for a future book or maybe for a future study or maybe for my own edification. I take that to its logical conclusion, to its end, and then I put those notes away and my head is now filled with new knowledge and then I wait for the next kick to hit me. Now that everything has become digital, for me to actually screen movies in my home, in my own theater, watching them 24 frames a second, is a joy I wouldn’t be able to partake in if my situation hadn’t allowed it.”

On assessing and revisiting his work

“Whenever I hear directors say they don’t watch their movies or they can’t watch their movies because all they see is the flaws and it’s just too painful, I feel so sorry for those people. How can you get up in the morning? How can you do what you do if you think your stuff was so shitty? If it was too painful to watch my movies, I wouldn’t make another one. I would just give up at some point. I just feel bad for them. I feel their lives aren’t as enriched as they could be. No, I watch my movies all the time. I’m always at home, they have a whole lot of movie channels. They show the films uncut and you just kind of hit the guide on your button and you see all the different movies playing for the next three hours or so, going down a line.”

“I usually don’t do an original score, because basically I don’t want to hire some composer who I’ve never met before and entrust them with the soul of my movie. I don’t trust anybody that much when it comes to my movie. So if I choose the music, I’m choosing it, it’s my choice. I’m not waiting for the eleventh hour for somebody to show me the soul of my son. I’m choosing the soul of my son. How I feel about Morricone is pretty evident is how many tracks… I haven’t stolen them, I’ve paid for every single one of them. And he has sold them to me, so there is no stealing involved. I pay for them.”

“When Brian De Palma would come out with a new movie, for the whole first two weeks before the movie would open I would count down the days. That week before Scarface opened, that was Scarface week. Six more days until Scarface! Five more days until Scarface! And then I would have Scarface dreams where I would imagine — which was kind of easy to do because I already had seen the Howard Hawks movie so I kind of had an idea of what to see.” 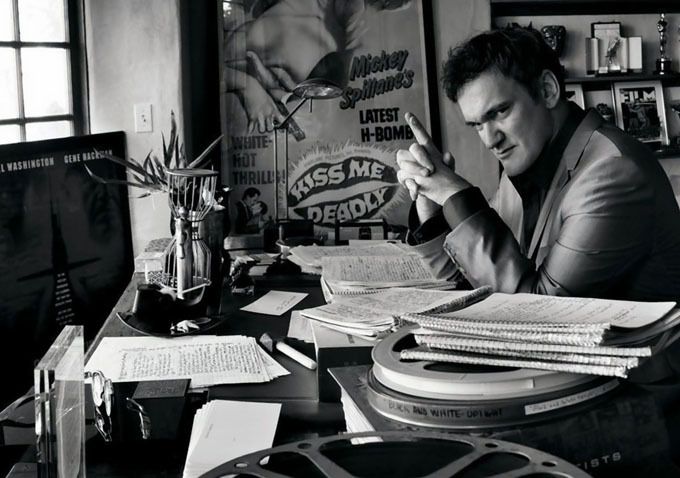