Sailing on the trendy and profitable satanic waves of horror’s inclusion in mainstream Hollywood that William Friedkin’s The Exorcist so successfully instigated three years prior, Richard Donner’s The Omen got out in 1976 and chilled the hell out of American moviegoers. The film that could be understood as a logical continuation of the story of Rosemary’s Baby, Donner’s cult classic introduces us to an American politician who finds a seemingly perfect way of solving his family’s personal tragedy: after his psychologically fragile wife gives birth to a stillborn, he agrees to replace the dead child with a newly orphaned, googly-eyed baby. It must be an act of God, he must have thought, what could possibly go wrong? With a lot of help from a neatly developed, creative marketing campaign that included countless well-designed, sinister-looking, intriguing giant posters placed around the country, as well as obviously benefitting from high-quality word of mouth promotion, The Omen was one of the highest grossing movies of 1976, bringing in more than 60 million dollars on a less-than-3-million-dollar budget. The audience enjoyed it, the critics loved it, for it had all the ingredients necessary for the creation of a true horror classic.

Written by David Seltzer, who published the book of the same title only two weeks before the film’s premiere as a marketing gimmick, the film presented well-respected actors and actresses who brought the much needed believability and a sense of groundedness to the project. Even though William Holden, Charlton Heston and Roy Scheider were all considered for the part, it was Gregory Peck who jumped into the shoes of the pragmatic ambassador unaware his black-haired baby boy just might be the end of the world. American actress Lee Remick plays his unnerved wife, dealing with a growing fear of her own child and successfully developing an honest, convincing relationship with her overprotective husband, while Damien, the Devil’s spawn, is portrayed brilliantly by six-year-old Harvey Spencer Stephens. When you have a solid, well-known cast, a skillful writer capable of crafting a supernatural story grounded in reality and a director who really knows that what creates sincere dread in the audience is not amassing gory jump scares, but presenting and then endangering characters that the viewers, due to the slow pace and patient plot development, can relate to and start to care about, it’s easier to make a film as horrifying as this. It was Donner’s decision to build The Omen as a psychological thriller, and it could be even argued it’s a picture as much about a disintegrating marriage as it is about the childhood of an Antichrist.

Even after its initial run in theaters, the reputation of The Omen grew, partly thanks to both the promotionally always welcome criticism from the Satan-sensitive Church and a series of tragic events that affected several members of the filmmaking crew. These occurrences, such as the IRA’s bombing of Donner’s hotel, the crashing of the plane that the crew wanted to board but had to cancel because of scheduling conflicts, Peck and writer Seltzer’s planes getting hit by lighting or The Omen’s special effects director John Richardson’s eerie car accident on the set of A Bridge Too Far, in which his girlfriend got decapitated, certainly spurred the popular belief that the film was cursed, much like it was the case with The Exorcist. If they were making a romantic comedy, Donner noted later, no one would even notice these coincidences, but due to the nature of The Omen, it was hard to look away. Curious or not, this definitely helped fortify the film’s reputation as one of the scariest films American cinema ever offered. Would this have been the case if the studio refused to give Donner additional funds to hire composer Jerry Goldsmith, we’ll never know, but Goldsmith’s universally celebrated score definitely elevated the whole picture, even helping him get the only Oscar of his career.

Shot by British expert cinematographer Gilbert Taylor (Dr. Strangelove, Star Wars) and edited by Donner’s frequent partner Stuart Baird, The Omen is an excellent example of a subtle, intelligent psychological horror that makes use of a variety of themes, employs several now well-known devices and features a cast that gives the story necessary credibility. As one of our favorite movies of the quality-prolific seventies, its presentation here on the site has been long overdue.

Screenwriter must-read: David Seltzer’s screenplay for The Omen [PDF]. (NOTE: For educational and research purposes only). The DVD/Blu-ray of the film is available at Amazon and other online retailers. Absolutely our highest recommendation.

“I was a brand new baby writer at that time and I had been influenced by Rosemary’s Baby, and I hadn’t even realized it until people started making comparisons. Certainly it was impacted by The Exorcist but I wouldn’t have cared if I could make a success resembling something else at that time, I just needed to get a movie made. Not that I wanted to compare or copy them in any way, they really weren’t in my mind. But they have been published together in anthologies, the three of them, and I think it’s interesting reading all three of them together, but I was never concerned about being compared to them. I was too young at the time to have that kind of ego.” —Screenwriter David Seltzer looks back at The Omen ’76

In these in-depth discussions, some of today’s most successful screenwriters share their work habits, methods and inspirations, secrets of the trade, and eye-opening stories from life in the trenches of the film business. It’s powerful knowledge—straight from the source. David Seltzer knows Hollywood. He knows the business, the tricks of the trade and all the hidden truths. He’s got the stories from working with Jacques Cousteau, penning coming-of-age story Lucas and the horror classic The Omen and adapting Roald Dahl’s Willy Wonka and the Chocolate Factory. He can tell you why writing is like love-making and why there is no such thing as fiction. His advice about directing? Wear comfortable shoes. In this interview, you’ll learn that and more, including what recent screenplay is the most elegant he has ever heard spoken on-screen and why you don’t win arguments with movie stars.

“You know, the script had been turned down by most of the studios and when the idea of taking it from a horror film and—into my mind—turning it in a mystery suspense thriller, that all of a sudden gave it a moment of class. So yes, I had the opportunity to make the changes I wanted, and I just had to find out if I was right or wrong. We were lucky enough to get Gregory Peck and Lee Remick to play the leading roles, which validated the story. When the film came out and was very successful, I was the new kid on the block.” —Richard Donner

Gregory Peck came to The Omen in the wake of a personal tragedy that saw him ready to work out troubling personal demons onscreen. Director Richard Donner shares his experience with Peck, along with the only argument he had with the legendary actor, in this Media Mayhem interview clip. Watch the full interview here.

David Warner in Starlog Magazine in Nov. 1982: “It was one of the best movies of the genre and I enjoyed working with Gregory Peck.”

During the filming of The Omen, Mark Caldwell visited the set of the production and spoke to Gregory Peck. When the film was released he then spoke to the producer Harvey Bernard and the director Richard Donner. All that remains of the original videotape is a sound recording Colin Grimshaw recently rediscovered in his collection. The Gregory Peck interview was shot on 16mm film, hence the reduced sound quality and camera sound in the background, the other two were on videotape. 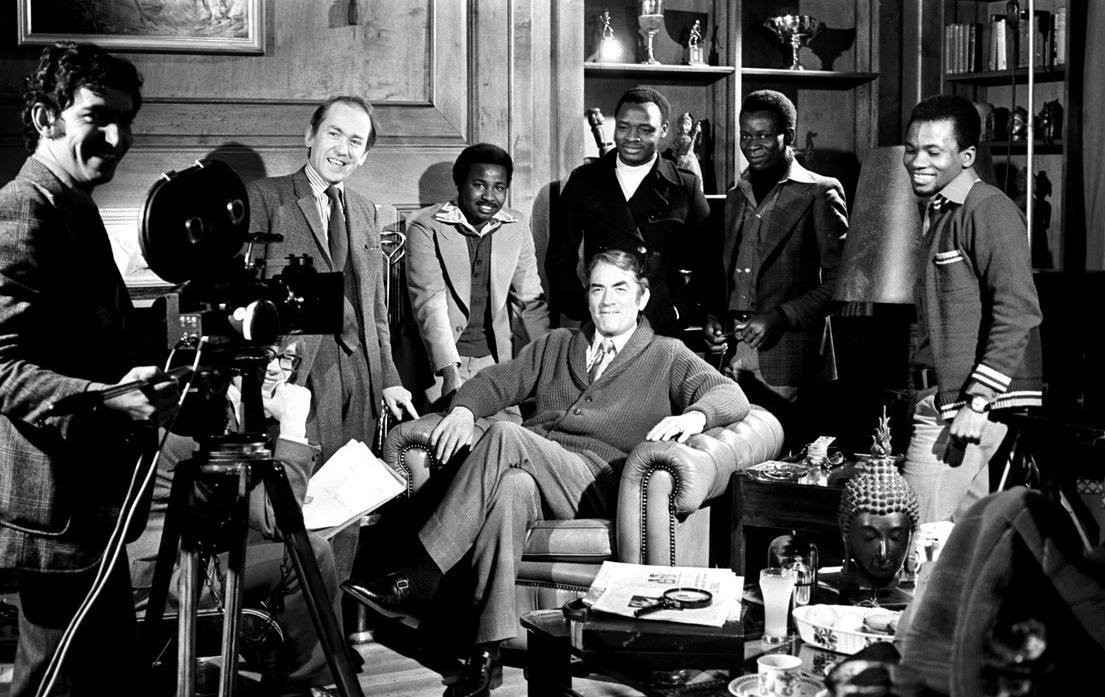 The true stories that spawned the eerie tale of Damien, a small boy with an angelic face, whose very name still conjures up thoughts of Satan. This documentary shares spine-tingling information about the the all-too-memorable flick that has terrorized film audiences since 1976.

In his three-and-a-half-hour Archive interview, Richard Donner talks about his start as an actor in New York and the career-changing moment when director Martin Ritt told him that he should work behind-the-camera as his assistant. Donner describes his start as a director, working in commercials and documentaries initially for George Blake, then for his own company. He recalls his transition to Los Angeles where he directed commercials with the cast of I Love Lucy. He recounts his work for several studios as a television director in the 1960s on Wanted: Dead or Alive (with Steve McQueen), Wagon Train (in an episode guest-starring Bette Davis), The Loretta Young Show, The Hathaways (a series featuring three chimpanzees), Gilligan’s Island, The Man From U.N.C.L.E., The Fugitive, and, most notably, The Twilight Zone. Donner outlines the challenges of directing the memorable Twilight Zone episode Nightmare at 20,000 Feet, in which William Shatner sees a gremlin on the wing of an airplane. He talks of his early forays into feature filmmaking and his return to television each time, feeling that he was not ready to make the jump. He remembers working on ’70s projects The Banana Splits Hour and the acclaimed television movie Sarah T.— Portrait of a Teenage Alcoholic, before his breakthrough success in movies with The Omen. Donner then chronicles the development and casting of hits Superman, The Goonies, and Lethal Weapon. He also describes his later work in television as a producer-director of the television series Tales From the Crypt. Stephen J. Abramson conducted the interview on June 22, 2006 in Beverly Hills, California.

‘YOU’RE THE DIRECTOR… YOU FIGURE IT OUT’

Richard Donner is one of Hollywood’s most important filmmakers, the driving force behind iconic hits The Omen, Superman, The Goonies, and the Lethal Weapon series. His films—which have grossed billions of dollars at the box-office—touch generations of moviegoers, yet little is known about the man responsible for their success. In the only authorized biography, author James Christie charts Donner’s transformation from wayward New York youth to Hollywood hotshot, revealing a power generator personality every bit as large as his blockbuster movies. Based on extensive interviews with Richard Donner, his friends, family members, and many of those who have worked with and for the filmmaker, ‘You’re the Director… You figure it out’ (the title is taken from an on-set spat between Donner and Steve McQueen) goes behind the scenes on butting heads with Steve McQueen, sidestepping Marlon Brando’s eccentricities, exploring the secrets of these and other big screen collaborations with Gregory Peck, Richard Pryor, Jackie Gleason, Mel Gibson, Bill Murray, Jodie Foster, Sylvester Stallone, Julia Roberts, Bruce Willis, and many more.

Here are several photos taken behind-the-scenes during production of Richard Donner’s The Omen. Photographed by Bob Penn © Twentieth Century-Fox, Mace Neufeld Productions. Intended for editorial use only. All material for educational and noncommercial purposes only.