Martin Scorsese’s first Hollywood studio production, Alice Doesn’t Live Here Anymore is an unexpectedly delicious comedy that we find to be one of the most charming and perceptive movies ever filmed on the topic of human self-searching and independence. Of course, being under the studio’s wing, Scorsese had to adhere to certain expectations that stemmed from the genre’s postulates, but he plays around these conventions quite skillfully, delivering a story that is both surprising and ultimately satisfying. Ellen Burstyn gives a wonderful performance as the main character so frequently used as an example of the seventh art’s exploration of women’s rights and liberation, although Scorsese himself pointed out on several occasions his film was primarily about human liberation in general. The fact that he made this woman-centered story right after the highly predominantly male perspective in Mean Streets proves just how versatile he really is. Besides Burstyn’s performance, which brought her an Academy Award, what makes this film special is the rich and very funny screenplay penned by Robert Getchell. Alice Doesn’t Live Here Anymore is occasionally painful and sad, mostly amusing and heart-warming but frequently outright hilarious, and Alice’s character is developed in depth and with precision and passion that became almost a trademark of Scorsese’s filmmaking. This is a well-written story and disguised analysis of American women and a most satisfying ode to independence of spirit and value of self-sufficiency.

A monumentally important screenplay. Dear every screenwriter/filmmaker, read Robert Getchell’s screenplay for Alice Doesn’t Live Here Anymore [PDF]. (NOTE: For educational and research purposes only). The DVD of the film is available at Amazon and other online retailers. Absolutely our highest recommendation.

“Alice was more rehearsed and improvisational than Mean Streets had been,” stated Martin Scorsese when comparing the making of Alice Doesn’t Live Here Anymore (1974) to its cinematic predecessor. “The reason was—Ellen [Burstyn] asked me to do the picture for her.” Burstyn got the script about a would-be nightclub singer who pursues her dream upon becoming a widower from producer David Susskind; taking the advice of filmmaker Francis Ford Coppola she approached Scorsese. “Some people have said that Alice is a movie about women’s liberation, but I think that’s the wrong emphasis. It’s about human liberation,” declared Scorsese. “Bea, Lelia Goldoni, is in reality Ellen Burstyn’s best friend so that scene where they say goodbye is all from reality. That’s important. That’s why I like that scene. Dianne Ladd had the same relationship with Ellen over a period of ten years as you see in the picture. So I played on what they knew.” Cast along with the trio of Burstyn, Goldoni (Shadows), and Ladd (Chinatown) are Kris Kristofferson, Harvey Keitel, Alfred Lutter (The Bad News Bears), Jodie Foster, and Billy Green Bush (Five Easy Pieces).

“It’s nice when you have six hours, like in Scenes from a Marriage (1973), when you can get different aspects of these people,” reflected Martin Scorsese. “But it was a little too ambitious to try to come up with a film in which you had four or five different relationships going on with eight characters.” Working with film editor Marcia Lucas (American Graffiti), the director made significant alterations to the story to achieve a manageable theatrical runtime of 112 minutes. “The first cut of Alice was 3 hours and 16 minutes. There was so much character stuff thrown out; it was a real pity.” The camerawork added to the atmosphere of the movie. “I was trying to capture a number of characters who were really very much in a state of confusion and never really settling. So the camera is always shifting and moving around… When it does stop, they are usually scenes of stability, like in the bathroom scene between Ellen Burstyn and Diane Ladd.” 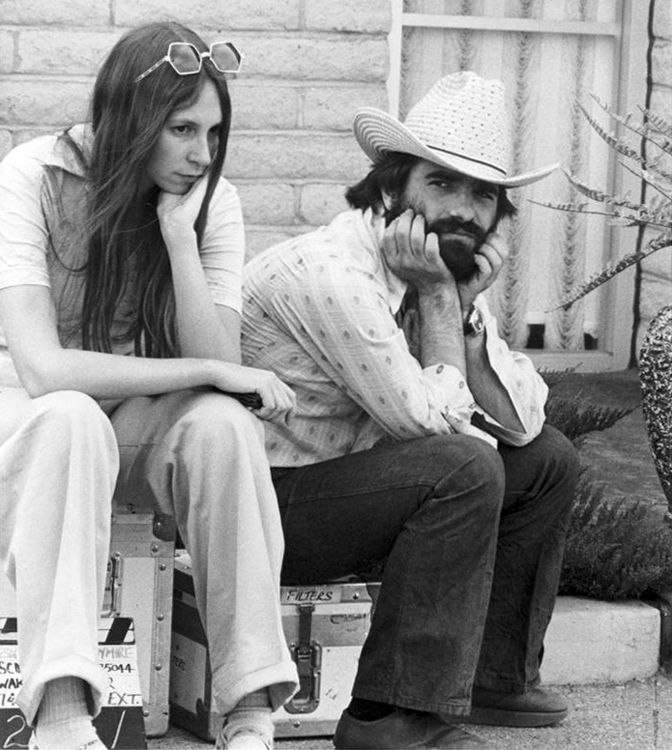 Being a Hollywood studio production, Martin Scorsese had to appease Warner Bros. executives. “We tried to work truthfully as possible within the conventions of the genre. And within the conventions was the studio chief telling me, ‘Give it a happy ending!’ I said, ‘All right.’ But the last line is the kid saying, ‘I can’t breathe.’” Alice Doesn’t Live Here Anymore grossed $19 million domestically and at the Oscars the drama won Best Actress (Ellen Burstyn) and contended for Best Supporting Actress (Diane Ladd) and Best Original Screenplay. The BAFTAs awarded Ellen Burstyn with Best Actress and Diane Ladd for Best Supporting Actress and scriptwriter Robert Getchell for Best Screenplay; not to be left out, Martin Scorsese received a Best Director nomination. Ellen Burstyn and Diane Ladd repeated their BAFTAs success at the Golden Globes and Robert Getchell was honoured with a Best Original Screeplay nomination from the Writers Guild of America. At the 1975 Cannes Film Festival, Scorsese contended for the Palme d’Or. —Understanding Scorsese: A Martin Scorsese Profile

Listen to the audio interview with Martin Scorsese (MP3 format, approximately 90 minutes). Published in the Spring 1975 issue of Film Heritage.

Scorsese presents Alice Doesn’t Live Here Anymore and a post-screening Q&A with Best Supporting Actress nominee Diane Ladd. INSIDE PERSPECTIVES is a UCSB faculty-moderated quarterly film series sponsored by The Carsey-Wolf Center and the department of Film and Media Studies.

Ellen Burstyn on Alice Doesn’t Live Here Anymore: “I found an unknown director named Marty Scorsese and I hired him.”

An amped up Martin Scorsese talks about the filmmaking process of Alice Doesn’t Live Here Anymore, working with a kid on Alice, and more. —Rare, amazing interviews from Cannes 75: Spielberg, Herzog, Scorsese

Photo credit: Floyd McCarty © Warner Bros. Intended for editorial use only. All material for educational and noncommercial purposes only.