It’s been almost nine decades since the talkies spread throughout the film-appreciating community and revolutionized the filmmaking business. And yet, it seems the sound is somehow still underappreciated and taken for granted, if we were to base our judgement on the reputation of soundmen. Honestly, how many notable soundmen can you name at this point? Five, ten, fifteen? On the other hand, how many directors, actors, even cinematographers pop up in your mind? The art of sound recording and sound mixing is an integral part of making a movie, but it’s a fact average filmgoers should be reminded of more often. Christopher Newman, for instance, is a name an average film lover is probably unfamiliar with. Yet, you would have to have lived in a remote village in Eastern Siberia not to have seen some of his work. The Exorcist, Amadeus and The English Patient put three Academy Awards on this New York-born sound engineer’s shelves, but he also garnered recognition for his work on such classics as The Godfather, Klute, The French Connection, Annie Hall, The Silence of the Lambs and many others. Born in 1940, Newman excelled at his chosen field and is today considered one of the greatest soundmen in the history of filmmaking.

In this valuable interview published in Filmmakers Newsletter in 1974, Newman sits down with Andrew Bobrow to discuss his career, technique and approach to filmmaking. It’s refreshing and highly educational to learn all the delicacies and finesses of his craft, radiating with experience and knowledge gathered while sharing sets with some of the most significant filmmakers Hollywood had ever seen. His conversation with Brando on the set of The Godfather, his relationship with Alan Arkin while they were making Little Murders, not to mention a detailed inspection of the sound equipment he most liked to use… The interview serves as a nice companion to Newman’s acclaimed book ‘Naked Under a Waterfall: The Craft of Production Sound Mixing for Film.’ This Filmmakers Newsletter’s cutout is not only a precious peek into the career of Chris Newman, but also a cherished window into an underappreciated but essential segment of filmmaking. You can download the PDF version: The Art of the Soundman: An Interview with Christopher Newman. 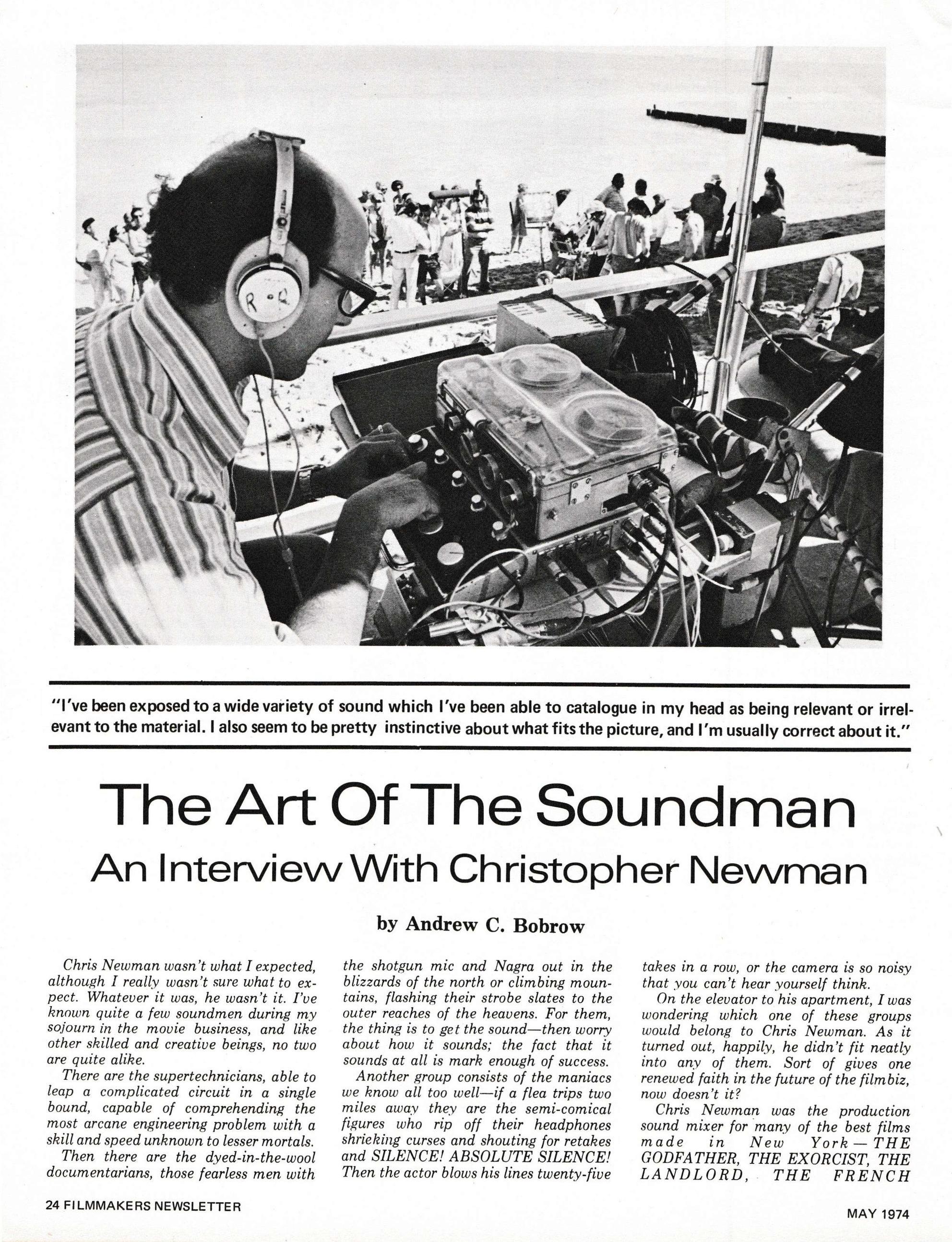 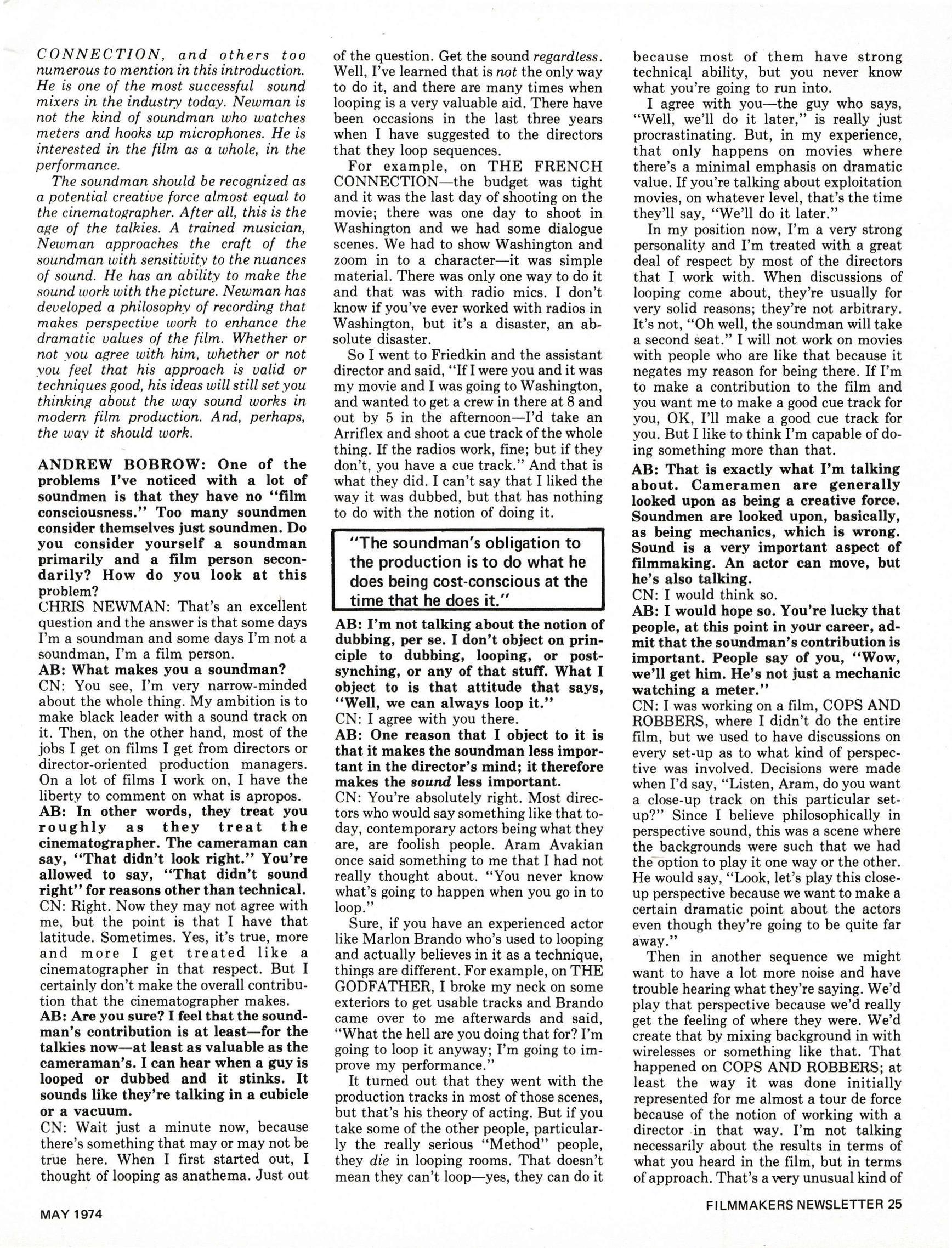 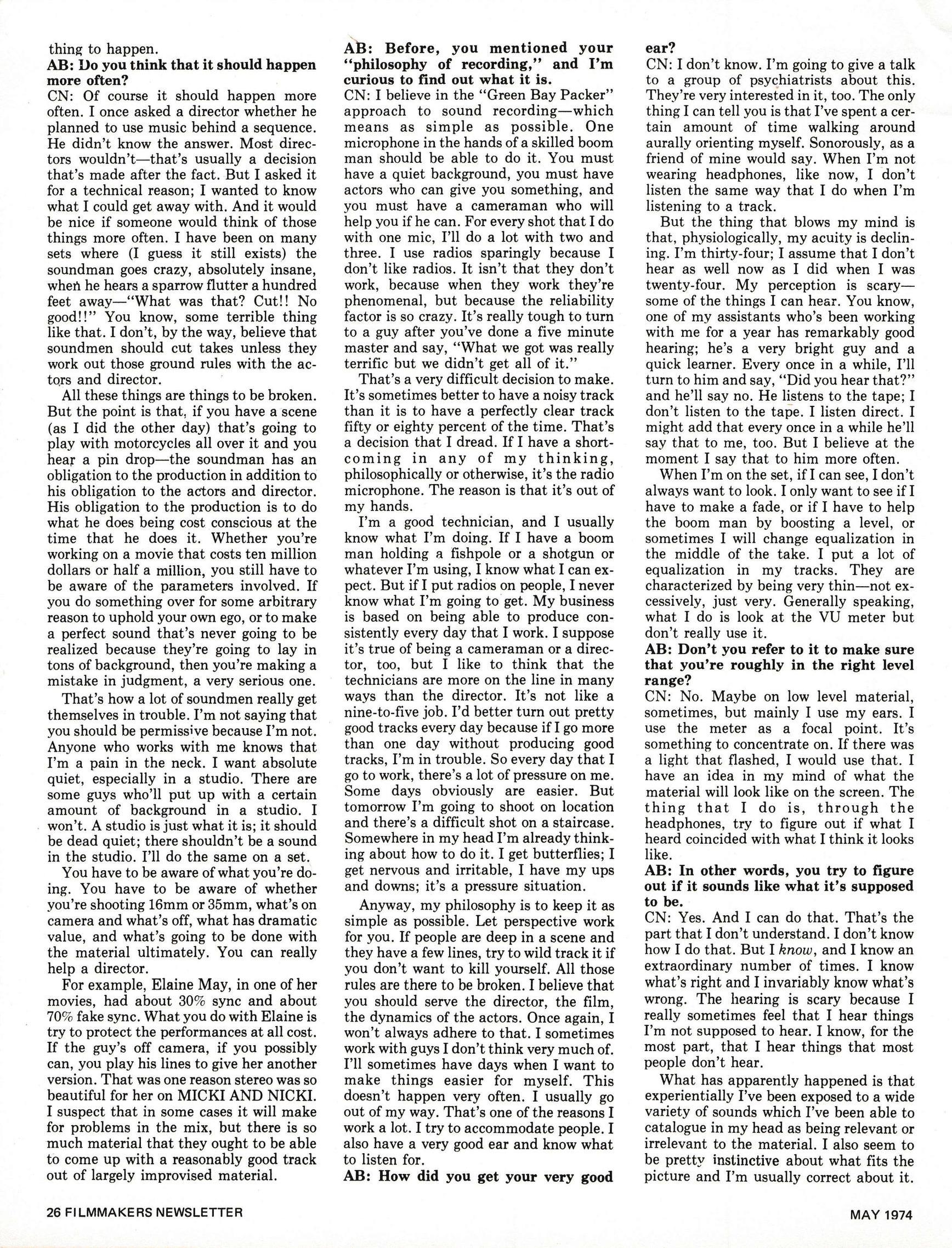 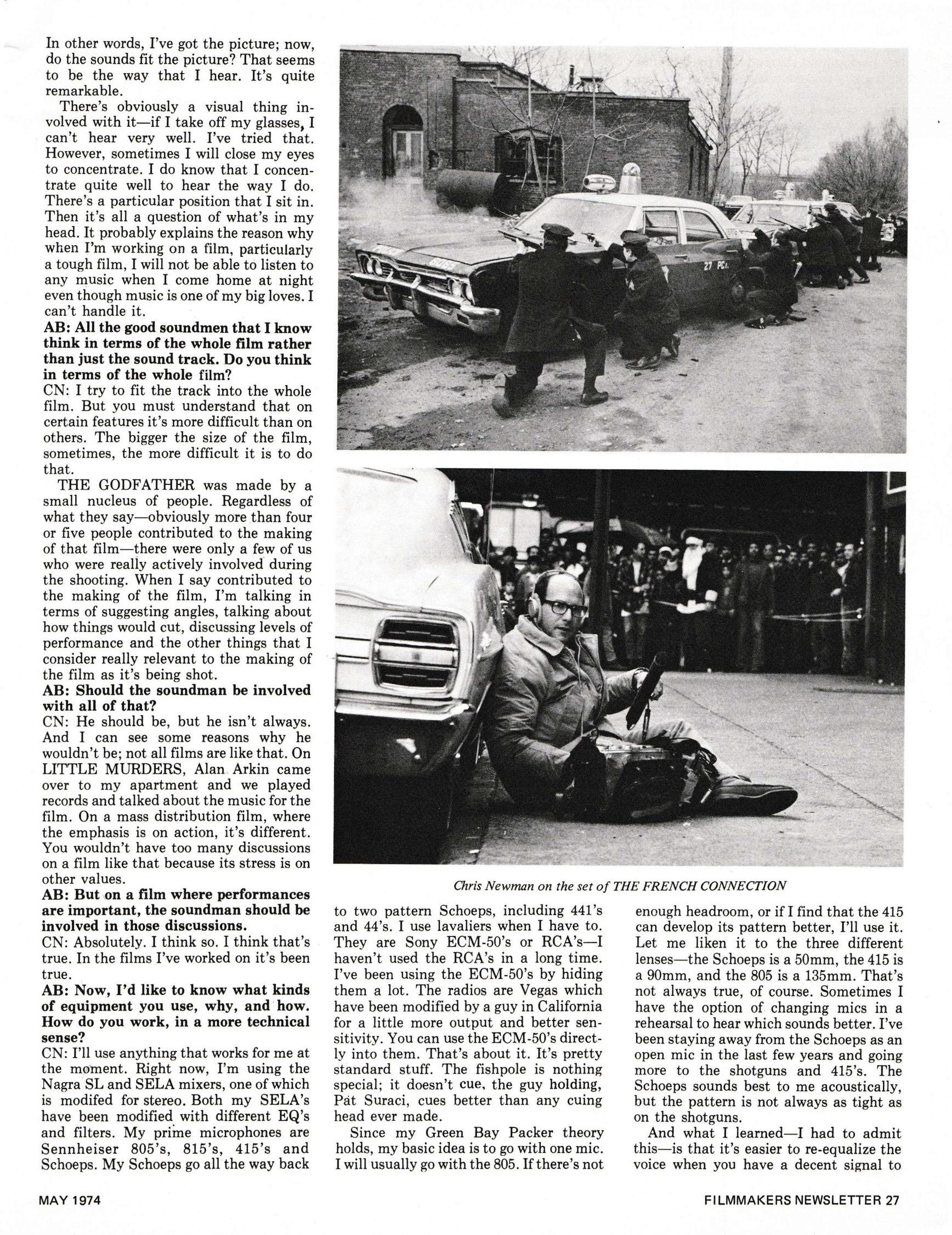 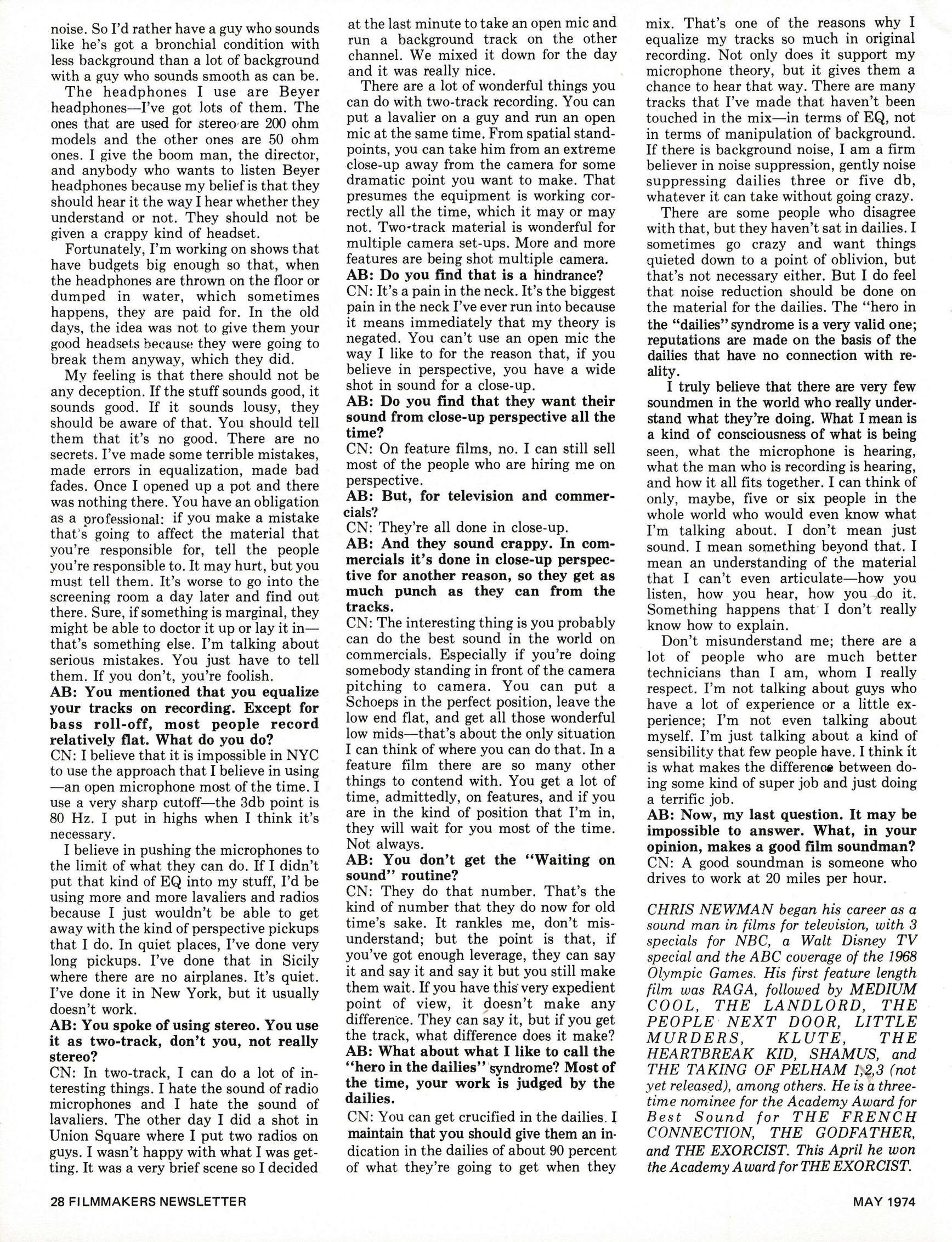