It would have taken so little for John McTiernan’s Die Hard, the metonym of action movies of the last part of the 20th century, to turn into something completely else. It took a lot of luck for humorous TV star Bruce Willis to become John McClane, the bloody-undershirt-wearing, exhausted-but-still-going-strong, funny-as-hell action hero who cleansed the Nakatomi Plaza from its vicious German aggressors led by the marvelous Alan Rickman in his feature debut. Willis was hardly a top contender for this Hollywood adaptation of Roderick Thorp’s 1979 novel Nothing Lasts Forever. Fortunately for him, though, the aging Frank Sinatra snubbed the contractually obliged offer from Fox, as did a whole gallery of significant action stars such as Sly Stallone, Don Johnson and Harrison Ford. Bruce Willis, the star of Moonlighting, was all that Fox got left with—and he elevated a thrillingly directed, sharply written film into almost everyone’s top ten Christmas film of all time. What Willis did for Die Hard was to add charm, humor and heart to a lead character so many tried to copy in the years that followed. But as much as Willis deserves praise for the most entertaining role he ever played, the team behind the camera deserves a standing ovation for practically revolutionizing the genre.

The screenplay, written by Steven E. de Souza and Jeb Stuart, presented an easily relatable story of a flawed cop who hates himself and travels home to try to fix his disintegrating marriage. Unfortunately for them but thankfully for all of us, what he finds standing between him and his wife is a group of thieves presenting themselves as terrorists. One vulnerable individual trapped in a building with a whole army of bad guys is the Die Hard recipe borrowed and adapted numerous times, but never to the same awe-inspiring effect. McTiernan proves he has the rules of the genre in the palm of his hands, introducing his character and the story’s basis slowly, gradually, with great usage of visuals rather than suffocating the narrative and the audience’s interest with useless exposition. What should not be forgotten, also, is the effort of cinematographer Jan de Bont, who toyed with experimental lighting and energetic camera work that sucks the viewer into the intense action scenes they would otherwise only witness from afar. It’s interesting to note that de Bont partially used the famous Kubrick’s lowlight lenses from Barry Lyndon, onto which he added an anamorphic element. But to praise anybody in particular responsible for creating this action classic would mean to simultaneously offend the entire team behind it, for all the pieces fit together like a charm. Die Hard is simply an endlessly quotable, unbelievably suspenseful, constantly mimicked Christmas special that deserves every single word of recognition it received over the years.

A monumentally important screenplay. Screenwriter must-read: Jeb Stuart & Steven E. de Souza’s screenplay for Die Hard [PDF]. (NOTE: For educational and research purposes only). With many thanks to the brilliant Steven E. de Souza. The DVD/Blu-ray of the film is available at Amazon and other online retailers. Absolutely our highest recommendation.

Steven E. de Souza discusses adaptations and writing from the villain’s perspective, offers advice on writer’s block, and reveals who wrote that line from Die Hard.

Bruce and I grew up watching the same TV shows. Roy Rogers used to say ‘Yippee ki yah, kids.’ So it had to become ‘Yippee ki yah, motherfucker’ in the movie. That line was from me. Whenever you think you’re writing a line that’s going to catch on, it never does. A lot of people, cough, Sylvester Stallone, cough, think they can invent them. The line you think is going to catch on never catches on and the audience decides what is the takeaway line. —Steven E. de Souza on screenwriting: There is no such thing as an action movie

“I went about it like it was reverse engineering. I knew that I had to go and learn what a movie was, not just my experience of going and watching a movie. So I went and sat in Truffaut’s Day for Night, watched it for three days straight, eight hours at a time and memorized it shot-for-shot. I got past the story, all the original and secondary experience, so I could study what it was that I was really watching. Film is really sort of a chain that’s really linear. Yet when it’s all strung together, it just sort of feels like an experience. It takes quite a while to be able to deconstruct that experience to figure out what you really saw.” —John McTiernan

John McTiernan talks about how he approaches actors when making a film, his notions on filmmaking and editing. Do not miss this, you’ll learn something you didn’t know. Courtesy of filmschoolthrucommentaries.

How the simple and to-the-point character introduction in Die Hard elevated it from a mere standard action flick to an all-time classic.

John McTiernan’s classic actioner Die Hard is broken down from top to bottom. To supplement his discussions of the film through filmschoolthrucommentaries’ condensed commentaries—you can also now take your time and study how he strung together the images together to form scenes and sequences. 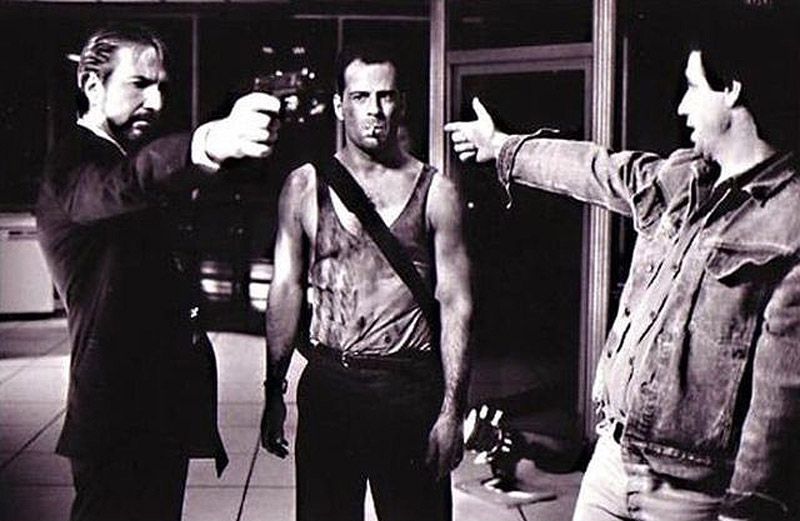 Jan de Bont, ASC, discuss his work on John McTiernan’s Die Hard, now considered a classic of the action genre. Citing an affinity for a proactive, participatory camera, De Bont details how he and McTiernan sought “the right style for the right moment,” and explains how production designer Jackson De Govia and editor Frank Urioste helped them achieve that. He also discusses the influence of John Frankenheimer, his approach to lighting the skyscraper interiors and exteriors (including balancing the two in shot), working with Panavision anamorphic lenses, and lighting the massive atrium set. —American Cinematographer Podcast: Die Hard 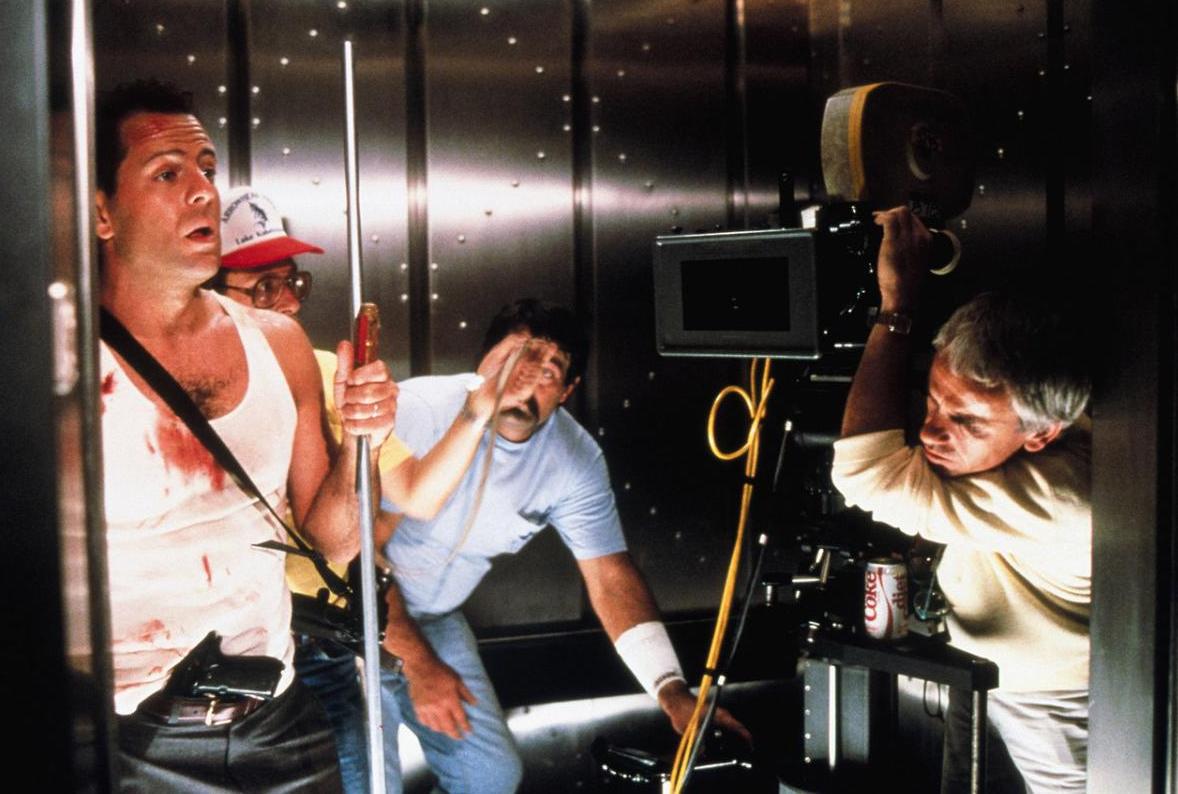 “Did Die Hard reinvent the Hollywood action genre? Definitely so. It also brought the talent of Michael Kamen to the mainstream with a nerve pounding score that constantly engages its audience. Assault on the Tower, the longest musical assembly of the whole movie, is a relentless equilibrium that addresses the failed Nakatomi takeover from within and from without; gelling the different dramatic point of views into one coherent piece.” —Pierre André Lowenstein

“I read it, and I said, ‘What the hell is this? I’m not doing an action movie.’ Agents and people said: ‘Alan, you don’t understand, this doesn’t happen. You’ve only been in L.A. two days, and you’ve been asked to do this film.’ Then I went back to England, and I kind of got the Joel Silver: ‘Get the hell out of here, you’ll wear what you’re told,’ and I said, ‘OK, fine.’ And then I came back and they handed me the new script. So, you know, it just pays to occasionally use a little bit of theater training when you’re doing a movie. It is shocking how thrilling it is to shoot a machine gun, that I discovered.”

Here’s a compilation of all the valuable bits from all of the commentaries John McTiernan had recorded and then making them screen specific, courtesy of filmschoolthrucommentaries.