A large amount of ink has been spilt discussing Christopher Nolan’s role in the development of the seventh art and his meaning for the future of film. Visit any lively forum in the States, Chile or Croatia, and I’m pretty sure you’ll easily find heated discussions on the real value of the man who’s been continuously entertaining us for more than a decade with films like Memento, The Dark Knight trilogy or Inception. It is to no surprise, then, that his every new move is anxiously anticipated. Especially when his next feature is an adventure in space, led by one of the most popular actors in the world today, it’s clear that the film will be scrutinized under the microscope of both ordinary film lovers and always eager film critics. In the middle of heated discussions on Nolan’s place in the handbooks on film, Interstellar has pompously landed in theaters.

In one of the most powerful openings I had the chance to see, Nolan introduces us to the dusty world of near future United States. Every year plague and other diseases destroy more and more crops, Earth is in the advanced stage of food deprivation and the government’s solution is the absolute concentration on agriculture. To save the world, scientists, engineers and Facebook community managers need to become farmers. The situation is so grave that armies have been dismantled, science has slipped to the bottom of the priority list, and only a handful of child prodigies are given the opportunity to attend college—everyone else has a duty to the planet to pick corn, manage combines and suck as much food as possible from the overly exploited lands. The landscape is ruled by thick dust clouds, dust is easily finding its way into every pore of life, filling people’s eyes, noses and throats, unmistakingly warning them the end is near. The plants are dying, humans are running out of oxygen and it’s only a matter of time when chronic hunger will step aside and allow asphyxiation to deal the final blow to the fading humanity. 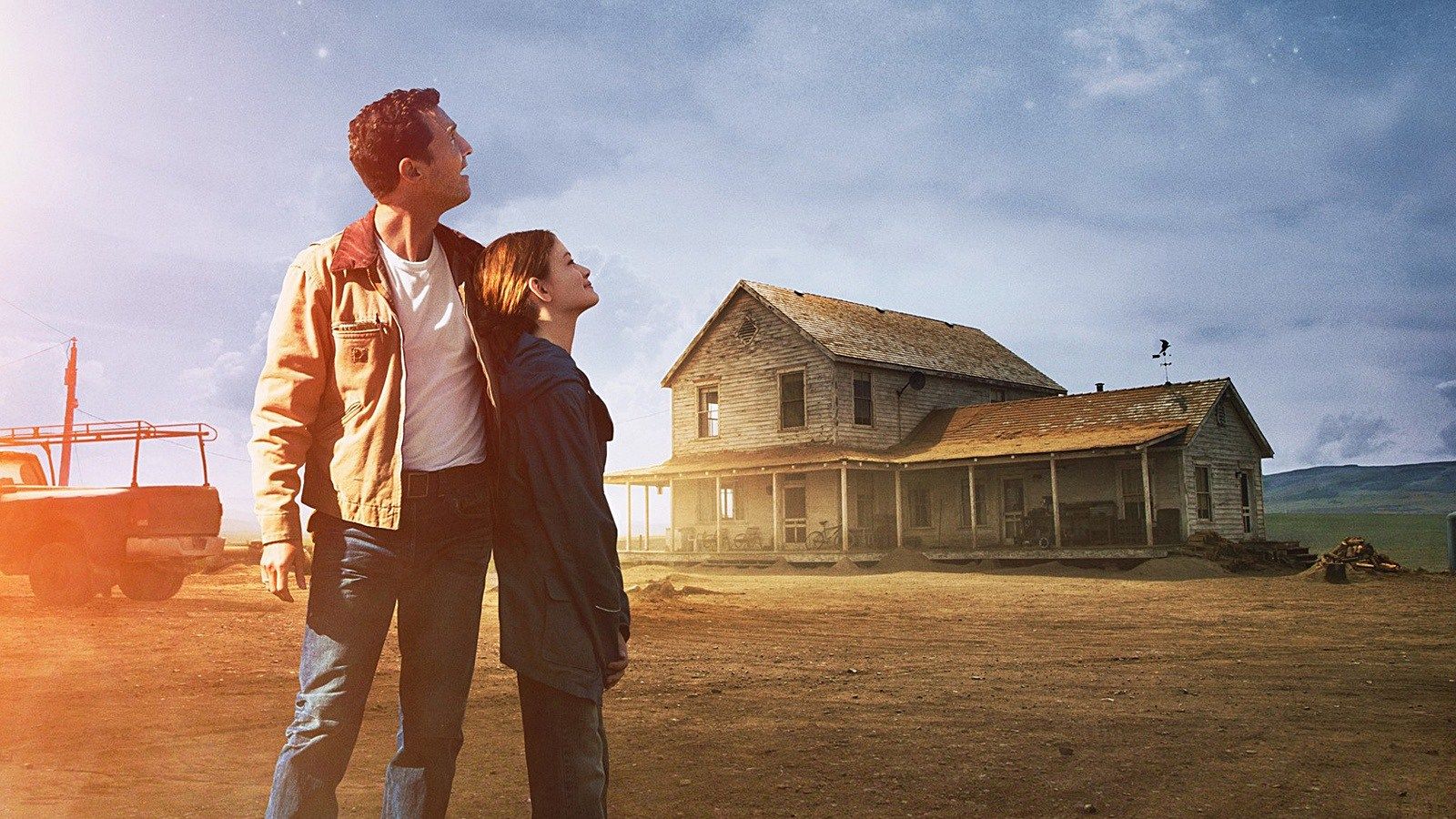 We meet Cooper (Matthew McConaughey), an ex-NASA pilot, dissatisfied farmer and father of two underage kids. His son Tom is not doing brilliantly at school and is hence destined to work the crops for the rest of his life, and little Murph, visibly under the influence of her father the scientist and dreamer, gets suspended from school for bringing her dad’s old book on the Apollo missions to class and getting into a fight with other children about whether the Americans actually made it to the Moon. The official teachings say it was all a piece of clever propaganda designed to bring the Soviet Union to the edge of bankruptcy. What’s the use of filling children’s heads with stories of other planets, Murph’s teacher explains to angry Cooper, when they need to understand the only way to survive is helping our own? Little Murph soon warns Cooper of unusual, unnatural events taking place in her room—books flying from the shelves, toys getting broken even though she swears she never even touched them—blaming it all on a poltergeist.

Excited to finally get the chance to break the monotony of his everyday life by fiddling around with science, Cooper soon recognizes a pattern in these occurrings and discovers the coordinates of NASA’s secret space station, where his former professor Brand (Michael Caine in his The Dark Knight role of a wise old man) explains that NASA was officially dismissed due to the relocation of funds to agriculture, but has continued to work in the shadows, determined that the only way to save the human race was to seek a second chance somewhere among the stars. Cooper’s connection to his daughter is so precisely drawn out from the very beginning that it comes to no shock that she completely breaks down upon hearing that Cooper is needed by professor Brand to pilot the exploring mission. Cooper is joined by Brand’s daughter (Anne Hathaway) and two more, not particularly relevant scientists (Wes Bentley and David Gyasi). Everything is ready for take-off and Cooper, full of sorrow for leaving his kids for what could turn into several years’ time but also incredibly excited to return to the profession he always loved, sets out to accomplish the most important mission in the history of mankind—find salvation for his family and six billion of others somewhere in the darkness of unfamiliar galaxies. 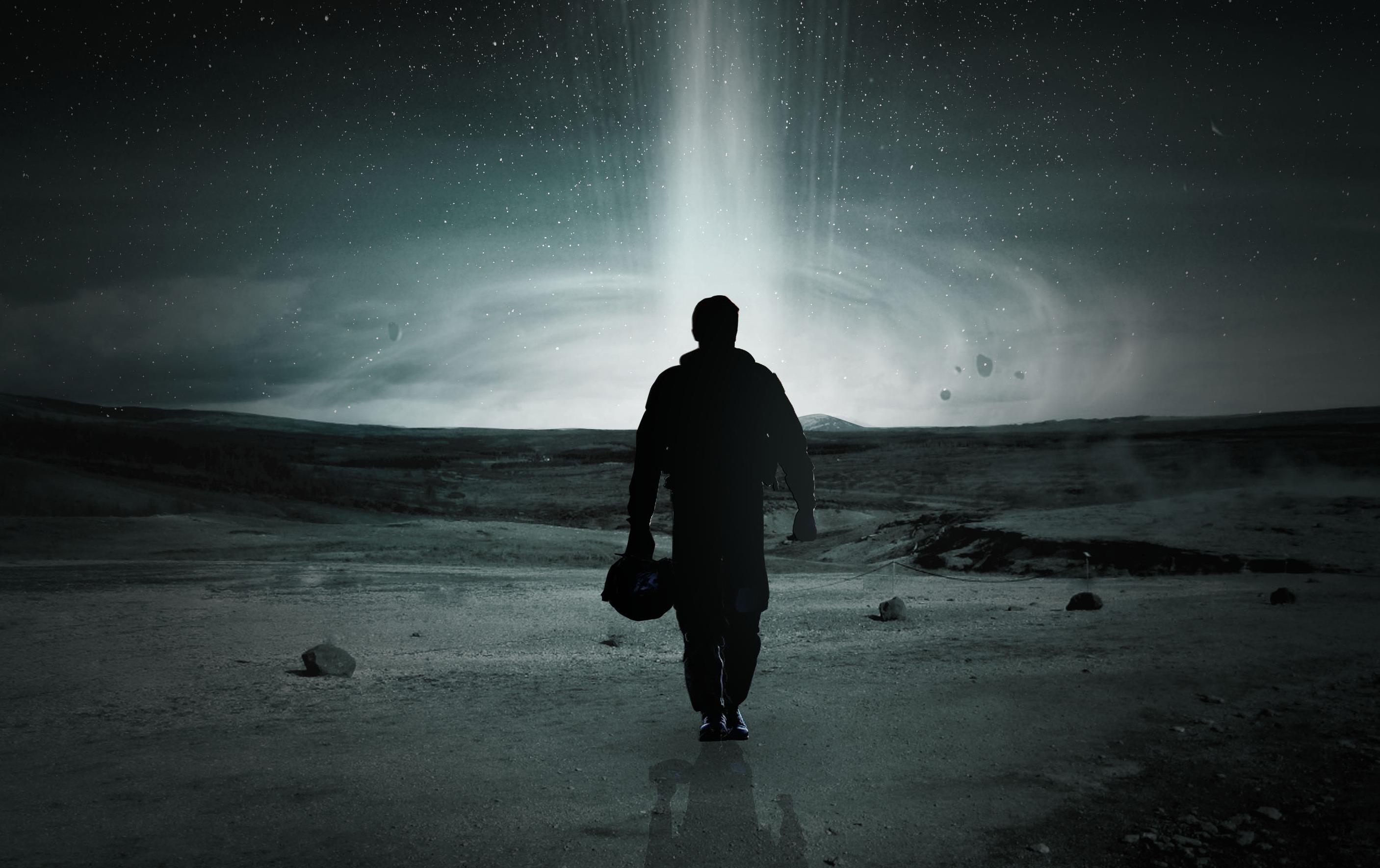 I wouldn’t easily throw around phrases like „an instant classic“ we’re so often able to find in film reviews these days. Not because Interstellar is certainly unable to become one, but because it’s incredibly difficult to make such a statement and not leave the impression of an unreasonable infatuated teenage girl. Still under the impression of what I’ve seen, I’ll try to restrain my enthusiasm, remain calm and simply state Interstellar is one hell of a film. Though I don’t feel nearly competent enough to evaluate Nolan’s position with regard to the greatest filmmakers in the history of cinema, I’m perfectly able to explain why I think so highly of him. Those of you who had the chance to see at least a bit of Inception or The Dark Knight know that his strength lies in the ability to create extreme tension based on astonishing visuals, and this film is no exception to that, being his visually strongest to date. People thirsty for entertainment are offered masterfully designed blockbusters that keep them on the edge of their seats, they are given excitement and escapist relaxation additionally enriched with concepts that oblige them to actually use their brains in the process. Nolan is like a cheeky McDonald’s employee, who takes your order for a Big Mac, but then comes back with the Big Mac package stuffed with beef stewed in red wine and coconut juice. He’s definitely not the new Kubrick or the Kieslowski of contemporary cinema. He’s just Christopher Nolan, the man who makes films for wider audiences but enhances them with ingredients for more demanding viewers. Who says that true entertainment has to be knuckleheaded?

Nowhere is this so apparent as in Interstellar, where the high adrenaline exploration adventure is given an extra dimension with an intimate exploration of human spirit and nature, similar to what Cuarón did in the controversial Gravity. But while Cuarón used space as a vehicle to help make a point about the human impulse for survival, the endless darkness here assists Nolan set up scenes for lamenting on the importance of family, compassion and selfless sacrifices. Why didn’t you simply tell Murph you left to save the world, Brand asks heartbroken Cooper at one point. Because the first impulse of every parent is to make sure their child feels safe, he tells her, which is a beautiful little truth which would have had even a greater effect if this kind of conversation didn’t occur perhaps a little too often. Without any doubt the most sentimental of all of Nolan’s films, Interstellar will pull the same strings that irritated the critics of Gravity‘s whininess, but while a lot of eyes will be rolled, those viewers immersed in the story and hooked on the gravity of Cooper’s sacrifice might even pull a Sandra Bullock in space, and start crying in their seats. 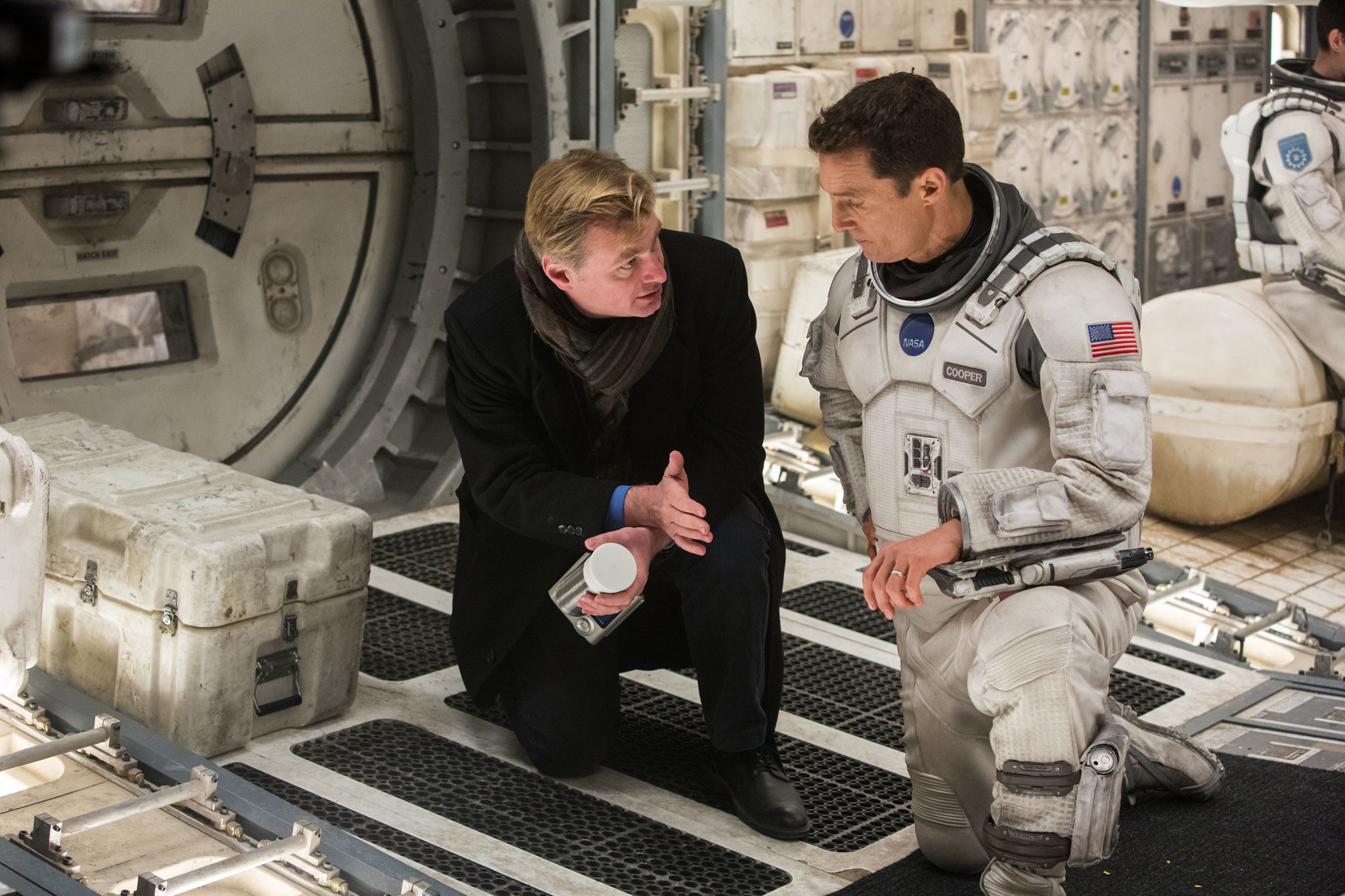 McConaughey needs only one scene to reaffirm what people have been saying about him after Killer Joe, True Detective, Mud and all others projects that helped him shake off the topless jackass stunt he’s been pulling for years. This is a scene that makes me easily forget all the possibly surplus lines of dialogue: Cooper sits in front of a screen as he watches the video messages his kids sent him in the course of 23 years back on Earth. Nolan keeps the camera on his face, watered eyes and painful stiffness of his jaw. Simultaneously feeling honest joy, deep pain and unrefined desperation, Cooper emanates these emotions through time, space and all metaphysical obstacles straight into the viewer, sitting emotionally shattered in the darkness of the cinema.

As Nolan’s frequent companion Wally Pfister was too busy working on Transcendence, his big shoes were aptly filled by Dutch-Swedish cinematographer Hoyte van Hoytema (Let the Right One In, The Fighter, Tinker Tailor Soldier Spy, Her), and it is to his credit that Interstellar looks wonderful. To be honest, when it comes to visuality, the film slightly lacks Gravity‘s preternatural beauty, but it’s difficult to hold anything against it. Interstellar is fabulous—from the dusty introduction around the shabby cabin, through powerfully imagined planets at the far end of the wormhole (the events on the water planet are particularly memorable and are, for me, the adrenaline peak of the whole film), to the very interior of the space ship—everything is completely polished, richly designed and extremely generous to the audience’s eye. 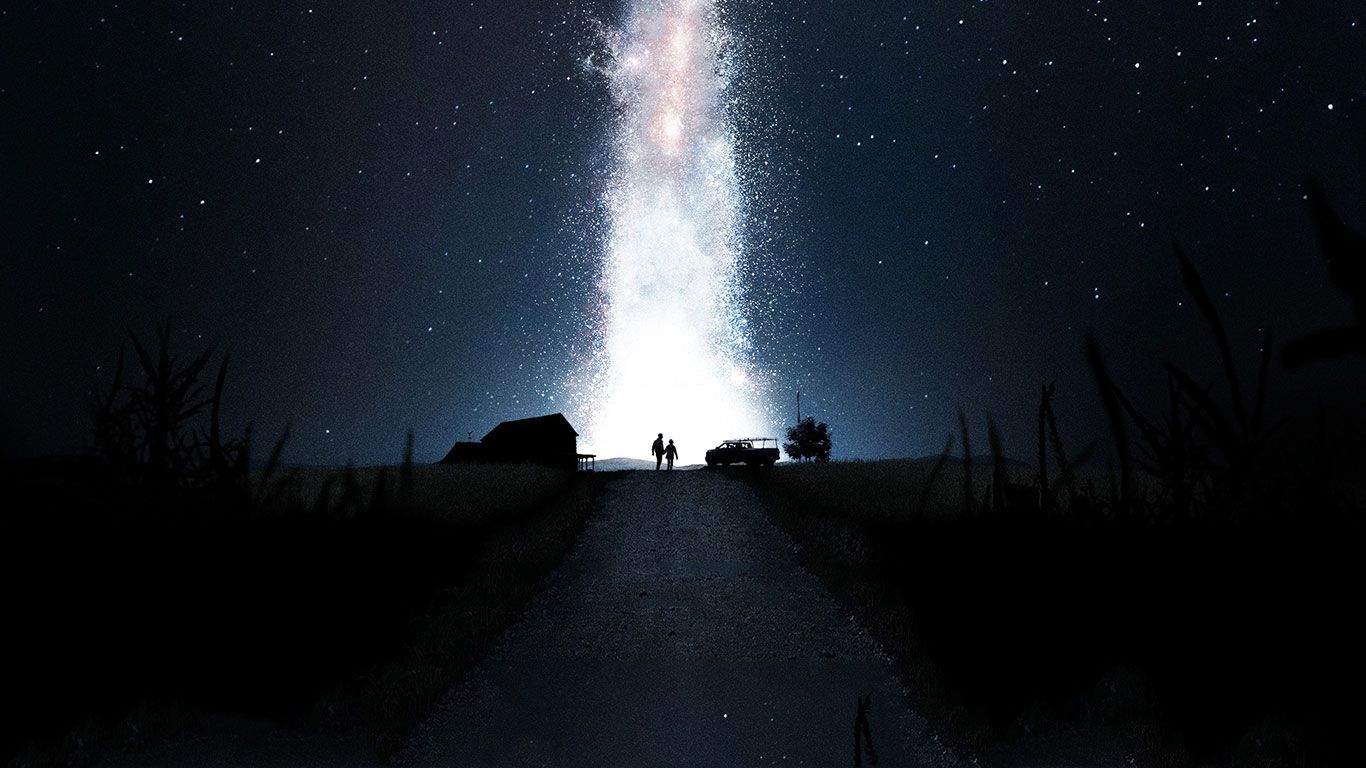 Interstellar is an inspiring triumph of modern blockbuster-making that not only excites the senses, but tinkers the mind and stirs the heart. Overly sentimental at times, it’s a film that will certainly find its fair share of haters. But at the end of the day, as they leave the theater dazzled and confounded, most viewers will get the urge to clap awkwardly into the night, staring into the starry sky, paying their respect to the man who breathed some soul into the relentless moneymaking machine beneath the Hollywood sign. Congrats, Mr. Nolan. You’ve done it again.

Interstellar hits the theaters November 6, 2014. Be sure not to miss the impact.

Infatuated with the world of film since the early days, when ‘The Three Amigos’, ‘The Goonies’ and ‘Back to the Future’ rocked his world, Sven Mikulec graduated this year from the University of Zagreb, Croatia, majoring in English with a special emphasis on American culture and literature. In 2010 he co-created an independent student website called FAK.hr dedicated to publishing film reviews and interviews, of which he’s still the editor-in-chief. In 2014 he became the managing editor of Cinephilia & Beyond. Huge fan of Simon and Garfunkel, a mediocre table tennis player and passionate fridge magnet collector, he’s interested in pursuing a career in journalism and fulfilling his long-term goal of interviewing Jack Nicholson while Paul Simon sings ‘April Come She Will’ quietly in the background.