Legendary Maestro Ennio Morricone is an international treasure, and today we celebrate his 86th birthday with a great BBC short documentary exploring the life and work of the brilliant Italian composer. Part 1 looks at his early years; part 2 looks at Morricone’s collaboration with Sergio Leone; part 3 features Morricone recording in Rome, and looks at his work on The Battle of Algiers and 1900—includes interviews with Morricone, Gillo Pontecorvo and Bernardo Bertolucci—part 4 looks at Morricone’s ’80s work on Casualties of War and The Mission, with interviews with Morricone, Brian De Palma and David Puttnam. This documentary was first shown on BBC2 in 1995 and was directed by David Thompson.

Ennio Morricone is probably the most famous film composer of the 20th century. He is also one of the most prolific composers working in any medium. No exact figure is available, but he’s scored several hundred films over the past several decades, perhaps as many as 500. While these have been in almost every imaginable musical style (and for almost every imaginable kind of movie), he is most identified with the “spaghetti Western” style of soundtracks, which he pioneered when providing the musical backdrop for the films of director Sergio Leone. Morricone’s palette is extraordinarily diverse, drawing from classical, jazz, pop, rock, electronic, avant-garde, and Italian music, among other styles. Esteemed by such important figures in modern music as John Zorn (not to mention contemporary directors like Martin Scorsese), he is increasingly placed among not just the finest soundtrack composers, but the most important contemporary composers of any sort. 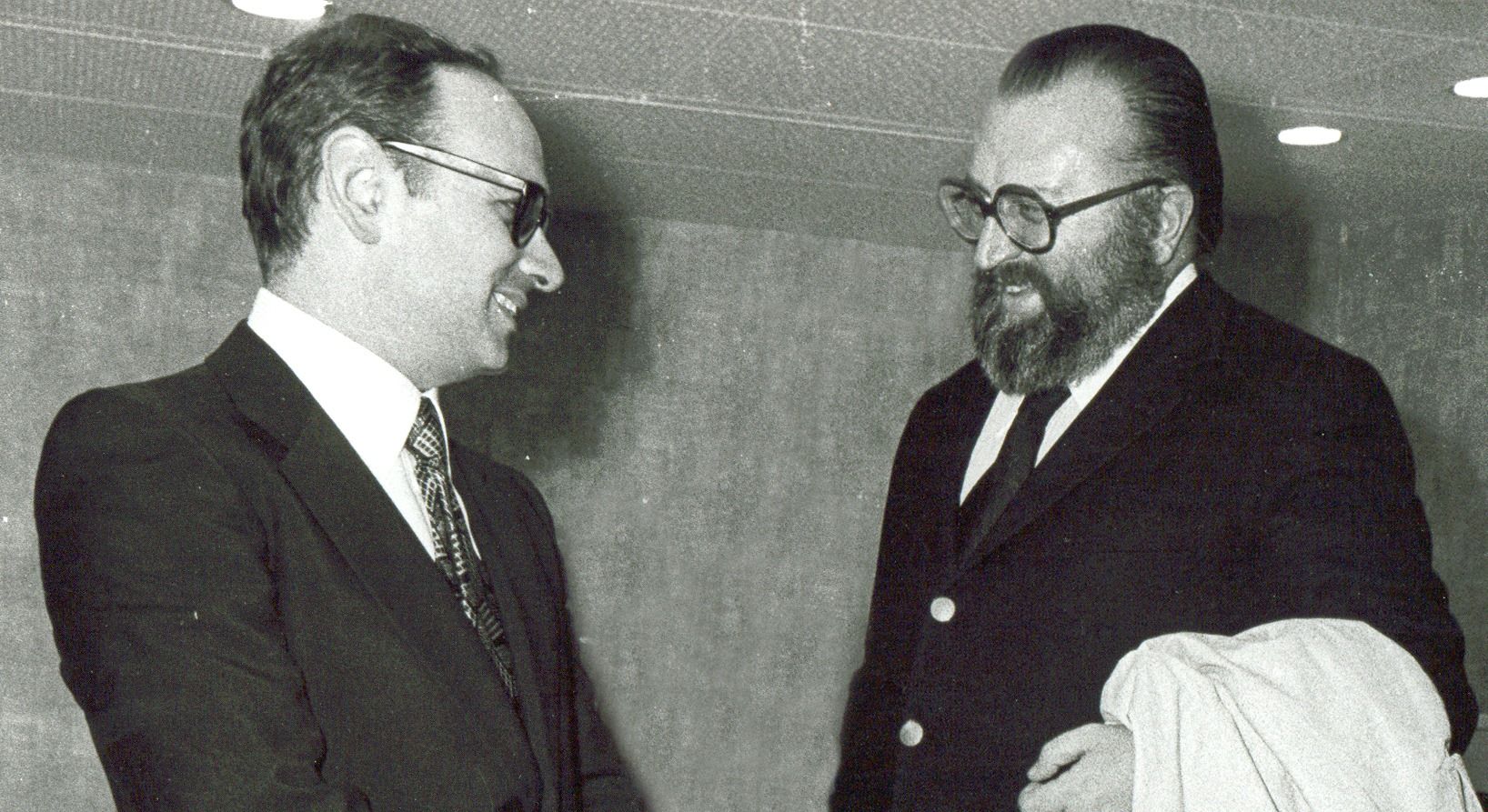 Morricone began studying music at Rome’s Conservatory of Santa Cecilia at the age of 12. Urged to concentrate on composition by his instructors, he supported himself by playing trumpet in jazz bands, and then worked for Italy’s national radio network after graduating from the conservatory. He didn’t begin scoring films until the early ’60s, and didn’t begin attracting international notice until he began collaborating with Leone, starting with A Fistful of Dollars in the mid-’60s (Morricone had previously worked on other Italian Westerns with other directors). The spaghetti Westerns only comprised a phase of Morricone’s career, but for many his work in this field remains his best and most innovative. 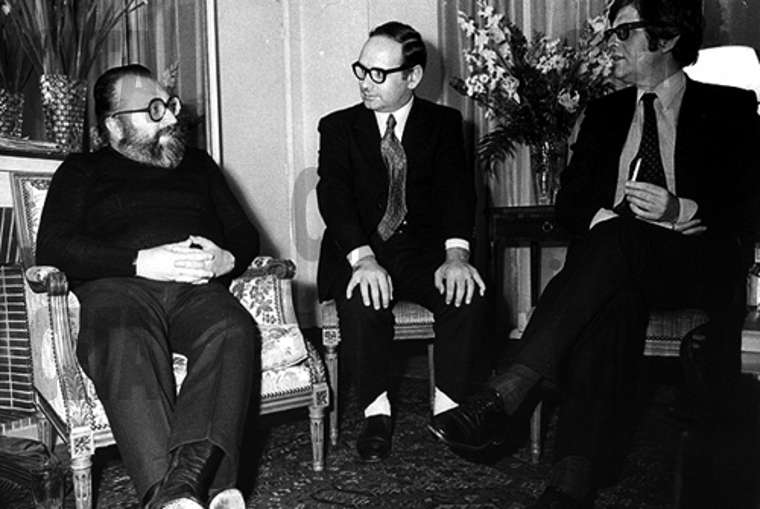 Morricone amplified the film’s plots and drama through ingenious use of diverse arrangements and instrumentation. Jew’s harps, dissonant harmonicas, dancing piccolos, bombastic church organs, eerie whistling, thundering trumpets, oddly sung gunfighter ballads, and ghostly vocal choruses—all became trademarks of the Morricone-Leone productions, then of the spaghetti Western genre as a whole. The influence of rock & roll was felt in the low, ominous twanging guitars, which reflected (intentionally or unintentionally) the sound of contemporary recordings by the Ventures, Duane Eddy, the Shadows, and John Barry. 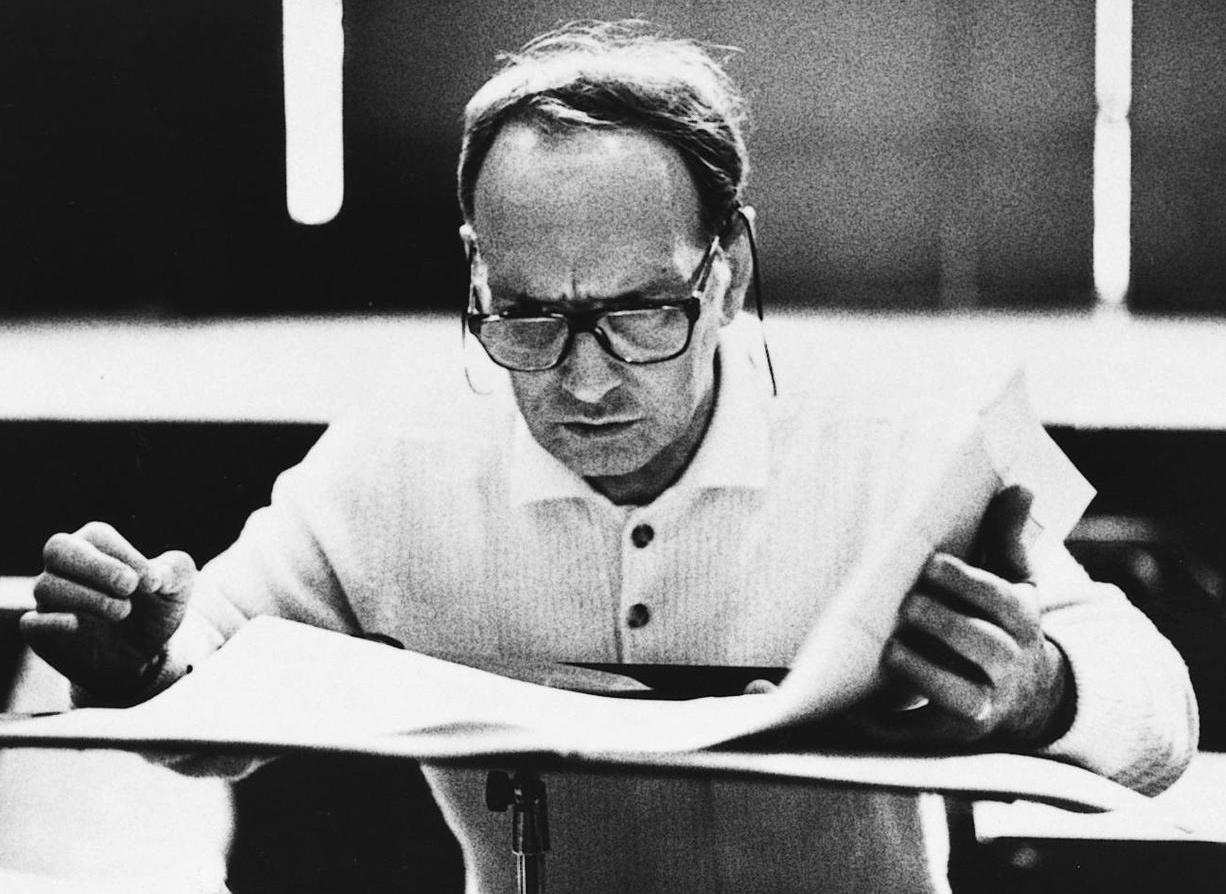 Morricone’s most famous composition, the theme to The Good, the Bad and the Ugly, made number two in the U.S. when it was covered by Hugo Montenegro. Even while he was busy with collaborations with Leone, Morricone found time for various other film projects, such as the agitprop classic Battle of Algiers and Burn! By the 1970s, Morricone was winding down his involvement with both Leone and the spaghetti Western, working with numerous other directors all over the world. Grand orchestration and memorable motifs were commonplace in Morricone’s work; Warren Beatty, for instance, once told the Los Angeles Times that “there’s nobody better than Ennio to create a haunting theme.” His scores also began to utilize more contemporary electronic influences, with mixed results. Age has not slowed Morricone in the least. In fact, the 1980s, ’90s, and 2000s saw his commercial success and widespread recognition at an all-time peak.

He garnered an Academy Award nomination for The Mission in 1986. Since then he’s worked for such top directors as Pedro Almodovar, Brian De Palma, Roman Polanski, Mike Nichols, Oliver Stone, and Barry Levinson.

Cinema Paradiso is probably the most renowned of his recent scores. With such an abundance of recordings, collecting Morricone remains a daunting proposition. It’s doubtful that anyone will collect all of his soundtracks under one roof; after all, the composer himself doesn’t even remember how many films he’s worked on. RCA’s The Legendary Italian Westerns, Virgin’s two Film Music volumes, and Rhino’s Anthology are useful collections, and the DRG label has reissued other noteworthy compilations of his work. —Richie Unterberger 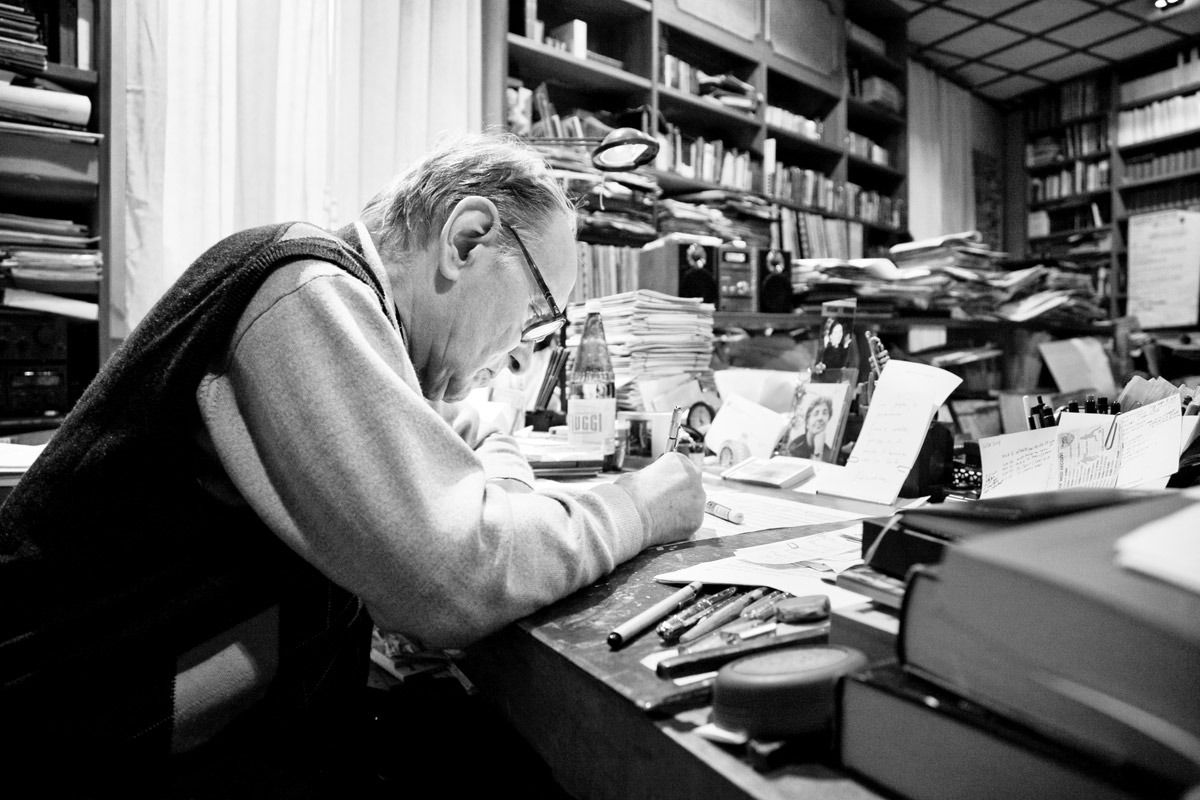 The film’s director is my client and is the person who contacts me,” says Morricone, from the home in Rome where he does all his writing. “There are various ways of going about the job. Sometimes I discuss the film with the director or he gives me the script to read; on other occasions, I view the first edit, the dailies or the final cut, and when I’ve got clear ideas I meet for discussions with the director and submit my ideas. I have a very close relationship with the directors I work with. Their collaboration is very important, but they must put their complete trust in the composer: Some directors have very clear, sometimes restrictive, ideas on what they want from a musical point of view, which limits composers’ creativity. —Interview: Film Music Maestro Ennio Morricone

Ennio Morricone writes the music to your films before you shoot them.
From Ennio I ask for themes that clothe my characters easily. He’s never read a script of mine to compose the music, because many times he’s composed the music before the script is ever written. What I do is give him suggestions and describe to him my characters, and then, quite often, he’ll possibly write five themes for one character. And five themes for another. And then I’ll take one piece of one of them and put it with a piece of another one for that character or take another theme from another character and move it into this character… And when I have my characters finally dressed, then he composes. And records with a small orchestra—12 pieces—and then we listen to it. And then we go on to the script. I don’t enter into particulars with him. I give him the feeling and the suggestions of the characters.

This almost caused a scandal at one point, with some of the actors, when they first found themselves in front of a playback recorder for the rehearsals of a scene that was just to be shot. But I have to say, in the end, that some actors even prefer to dub themselves later in the film in order not to lose the music underneath them while they are acting. They would rather have the soundtrack ruined by the music and dub themselves after. During shooting, it is very important and helpful for an actor to fall into an atmosphere created and sustained by the music. I’ve always felt that music is more expressive than dialogue. I’ve always said that my best dialogue and screenwriter is Ennio Morricone. Because, many times, it is more important a note or an orchestration than a line said. When you manage to express something with a look and the music instead of saying it with words or having the character speak, I think it’s a more complete work. —Interview with Sergio Leone

As in his previous films, Morricone’s soundtrack is in perfect symbiosis with the images, but here, for the first time, it contains some famous songs from the Twentieth century (as well as Rossini’s Gazza ladra) and is an integral part of the narration: it supports the jigsaw puzzle narrative structure and cross references between the various ages, thus allowing us to temporally locate Noodles’ memories. Morricone already had the soundtrack prepared in the mid-Seventies and during the shoot it was used to inspire the actors, as they did in the silent era. —Once Upon a Time in America, Festival de Cannes

Recommended purchasing: the most complete anthology ever released on Maestro Morricone. Including only original versions of his best works grouped in 7 different categories. All the pieces have been selected by Morricone himself. 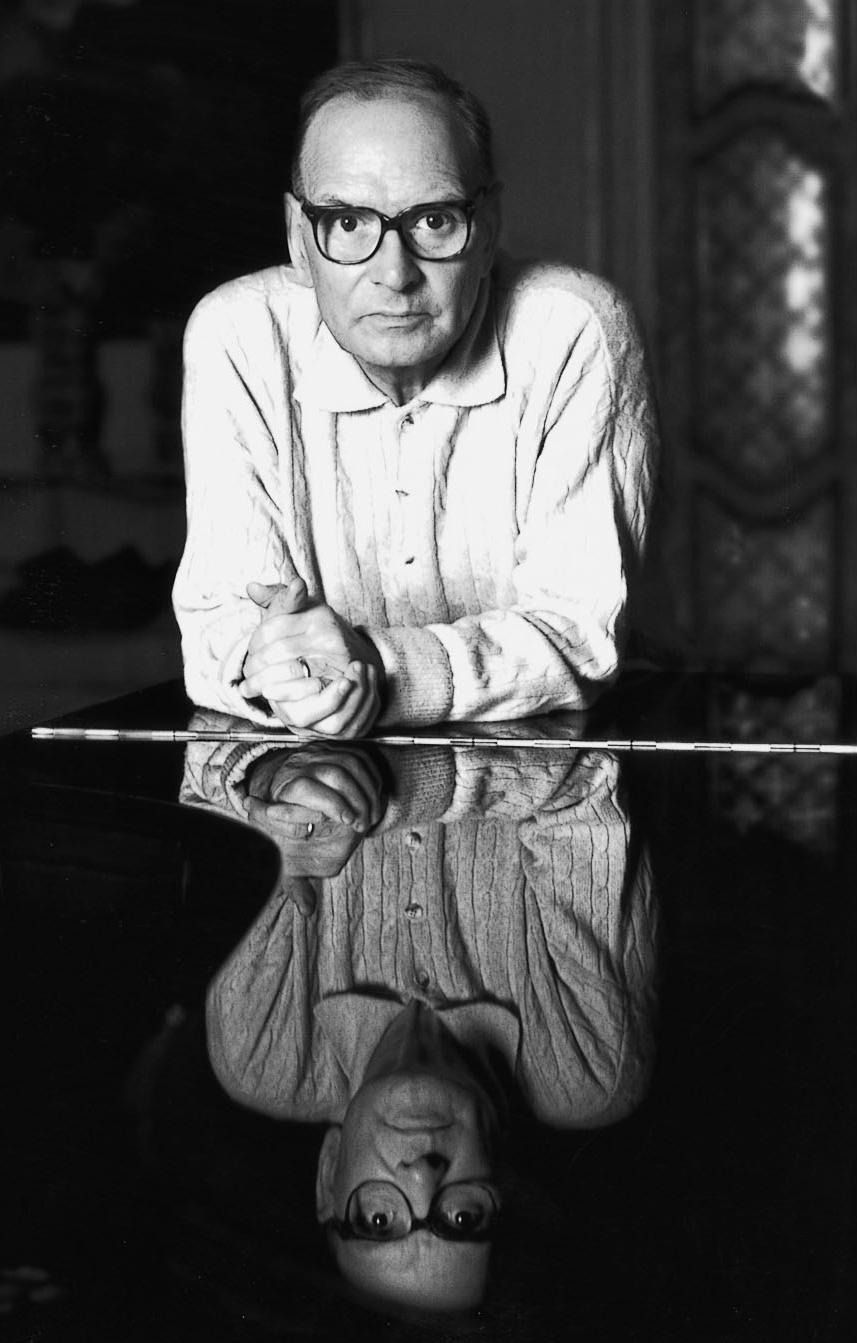