He paints with people, Jake Gyllenhaal said of David Fincher after the two had worked together on Zodiac. “It’s tough to be a color.” With the respected filmmaker’s notoriety for being as demanding and authoritarian a director as possible, we have no doubt in our minds that Gyllenhaal’s experience during the filming, as rewarding as it must have been, occasionally seemed as torture, especially after succeeding in filming a shot after no less than seventy takes that proved of insufficient quality for a perfectionist of Fincher’s caliber. Fincher’s approach to making Zodiac, a top-notch crime thriller that masterfully combined aspects of police procedural and newspaper movies, was to do what ever he possibly could to give the picture an authentic quality. Along with the screenwriter James Vanderbilt, he delved into research on the titular serial killer so deeply and with so much passion that he even unearthed certain evidence even the detectives working on this case missed decades ago.

Zodiac was built on the foundation laid by the two books on the subject written by Robert Graysmith, on whom Gyllenhaal’s character is based, but Fincher took Graysmith’s written words with a grain of salt, refusing to use anything in the book that he couldn’t dig up a police report for. Roger Ebert ingeniously judged this film to be All the President’s Men of serial killer movies, which is a construction we find to be a perfect description of Fincher’s movie. Just as Woodward and Bernstein labored away, digging information and patiently building the news story of their lives piece by piece, Zodiac presents a cartoon artist too stubborn and too curious to walk away from a seemingly unsolvable enigma, even at the expense of his personal life and health. What made it easier for Fincher to tell the story the way he liked it to be heard was the impeccable casting: besides Gyllenhaal, we witness marvelous performances from Mark Ruffalo, Robert Downey, Jr., Chloe Sevigny and Anthony Edwards. Zodiac is simply a film whose every little piece fits naturally and effortlessly, even though unimaginable efforts were put into its production.

I learned my lesson with Zodiac… You can ask a lot of an audience, but 2:45 minutes and no closure is probably—“Yes, get a babysitter; yes, find parking; yes, wait in line; yes, sit and have people with their phones on in your peripheral vision and concentrate for two hours and forty-five minutes,” is asking a lot. —David Fincher

Camouflaged as an intense, nail-biting narrative with the help of deeply thought-out characters and painfully dedicated attention to detail, Zodiac practically throws a vast body of information on the audience, without a single redundant scene or moment of idleness. This is indisputable proof of Fincher’s storytelling craft and eight years from Zodiac’s premiere, it’s easy to see Fincher constructed one of the best thrillers of this millennium.

A monumentally important screenplay. Screenwriter must-read: James Vanderbilt’s screenplay for Zodiac [PDF1, PDF2]. (NOTE: For educational and research purposes only). The DVD/Blu-ray of the film is available at Amazon and other online retailers. Absolutely our highest recommendation.

“I grew up on the East Coast, so I’d never heard of the Zodiac before this project,” says Savides, a New York native who had previously collaborated with Fincher on commercials and the features Se7en (as an additional photographer), and The Game. “I loved the Zodiac script, but I was concerned about the amount of non-cinematic information that had to be conveyed onscreen. There was so much exposition, just people talking on the phone or having conversations. It was difficult to imagine how it could be done in a visual way. I told David we had to figure out ways to make these scenes interesting and cinematic, but our solution was the opposite: to simply have faith in the material and present it truthfully.” 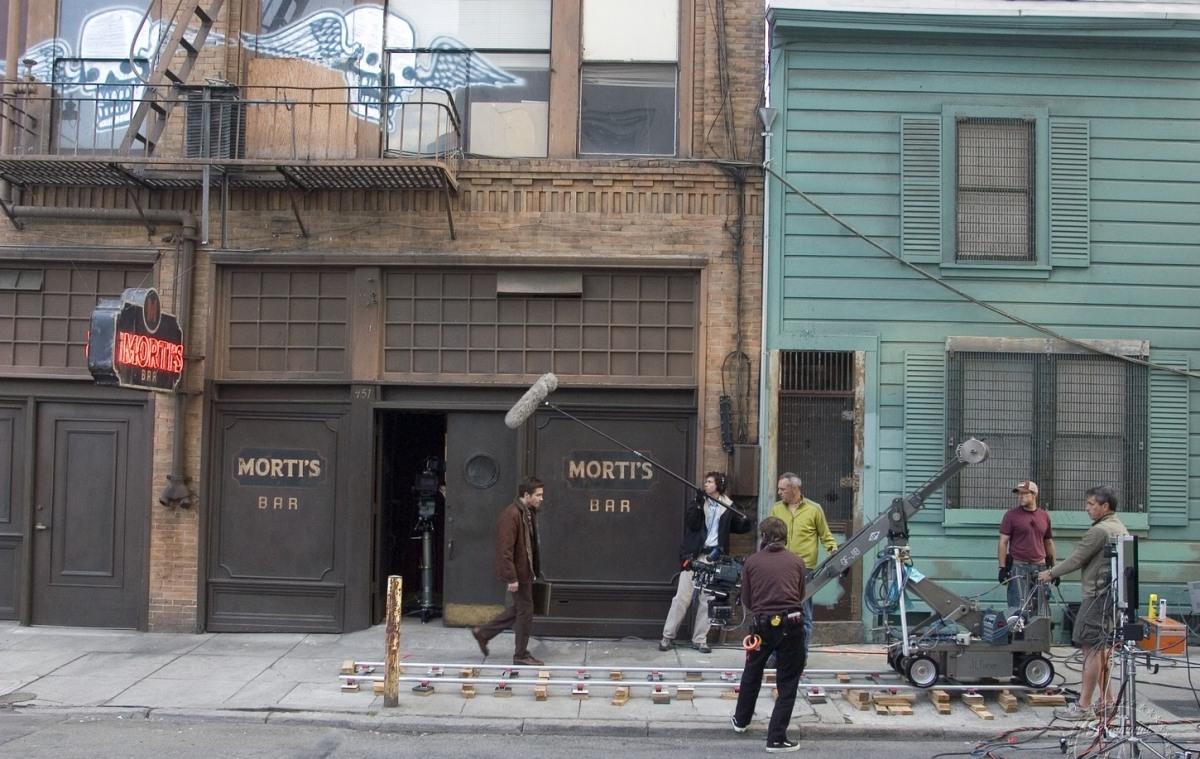 A native of the Bay Area who has distinct memories of the Zodiac events, Fincher was not interested in repeating any of the techniques that he and Darius Khondji, ASC, AFC had used on Se7en, a fictional serial-killer drama. “It was our hope not to be another one of those movies,” says Fincher. “Harris and I had done enough work on Se7en to not redo that [style]. Part of the approach on Zodiac was to make it look mundane enough for people to accept that what they’re watching is the truth. We didn’t want to hype anything or design anything to be seductive.” To that end, the action in Zodiac is presented objectively, with the camera impassively documenting each scene. Savides notes, “It was hard to be subjective with this story, in part because of the amount of information we were trying to present, and because we never wanted to ‘become’ Zodiac. We never wanted that through-the-eyes-of-the-killer perspective. This movie is more about the men who spent a better portion of their lives trying to uncover the truth about who Zodiac was. So introducing that kind of subjective viewpoint would have been a cheap trick to garner attention.” Fincher concurs, “That would have turned the story into a first-person-shooter video game. We didn’t want to make the sort of movie that serial killers would want to own. Instead, we were interested in a Dragnet style: ‘Just the facts, ma’am.’” —Harris Savides, ASC and director David Fincher plumb the depths of human obsession with Zodiac 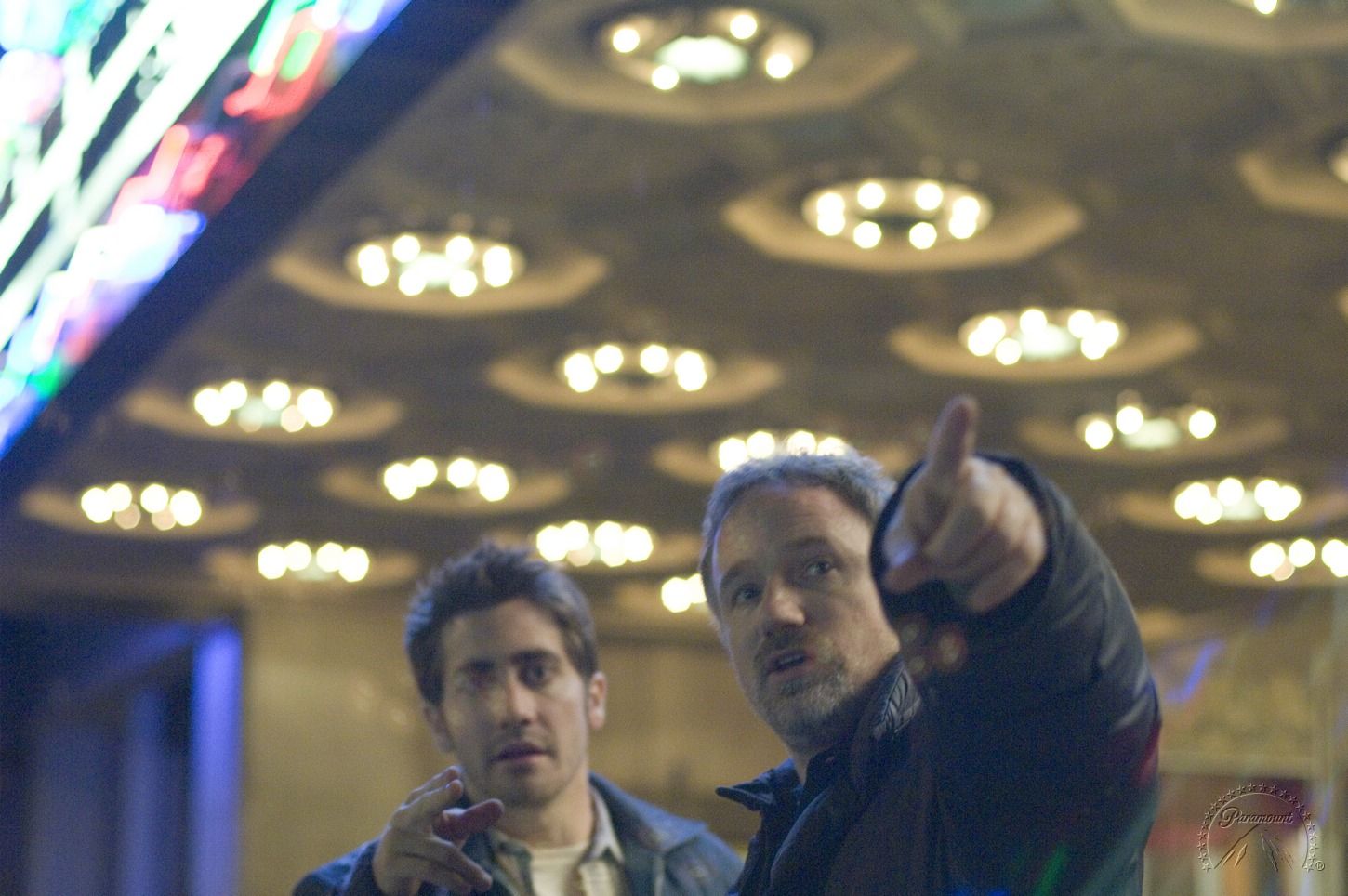 THE EDITING OF ‘ZODIAC’

David Fincher on digital filmmaking and Zodiac by Michael Kunkes.

How did you pick Angus Wall to edit Zodiac?
Angus and I have worked together for many years—exclusively for the past couple—and on commercials. Beyond his skill and sensitivity with character, and his tireless pursuit of the most streamlined narrative, we’ve been talking about our all-digital pipeline for some time. And he was, in my mind, the only guy to lead this charge. We both hate tape, and with the Viper camera as a “performance harvesting” tool, and the S.two [digital field recorder system] as a “mastering device,” we could finally do it.

What was your day-to-day interaction like?
Angus and I have a very intuitive relationship. I leave him alone because I trust what he does, and also because I want to see what he comes up with. So often, he can look at footage and say, “You didn’t mean that, you meant this.”

Like Seven and Fight Club, Zodiac is very darkly themed. How does it differ from your other movies?
This movie is very different for me in terms of the staging. There are not a lot of close-ups, because I wanted everything to play as wide as it possibly could. Most scenes are: Two guys walk into a room, sit down over a cup of coffee and then proceed to rip through six pages of dialogue. We were trying to be super-simple and super-direct and wanted audiences to form their own opinions of things, and not have to go, “Oh, that’s the killer; that’s the evil guy.”

What was the reaction at Paramount and Warner Bros. to your workflow?
I think that in the end, they were freaked out by little weird things, like, “Who’s going to handle the digital material?“ “What’s going to happen to these D.Mags [digital film magazines]?” “Where will they go?” The answer is that they’ll be dealt with in the same way that your single copy of your camera negative is dealt with: A production assistant delivers it somewhere in a van, and it’s ingested there. Once they realized they were going to have back-ups and copies of everything—and once they started seeing stuff happen on PIX [Private Internet Exchange firewall], which put everyone on the same page—they were sold.

As a filmmaker, what did Zodiac mean to your craft?
The great thing about digital moviemaking is that for the first time in the history of motion pictures, everyone—from the cameraman to the hair and makeup people—is looking at the same 23-inch monitor, reviewing a take and talking about the exact same thing, and that’s never been possible before. The idea was not to be as “digital” as we could for its own sake. The idea is to use everything that’s available to us to make the filmmaking process cleaner, keep everyone informed, and communicate better so we can get more of what we want. It’s just another way of democratizing information. —David Fincher on digital filmmaking and Zodiac 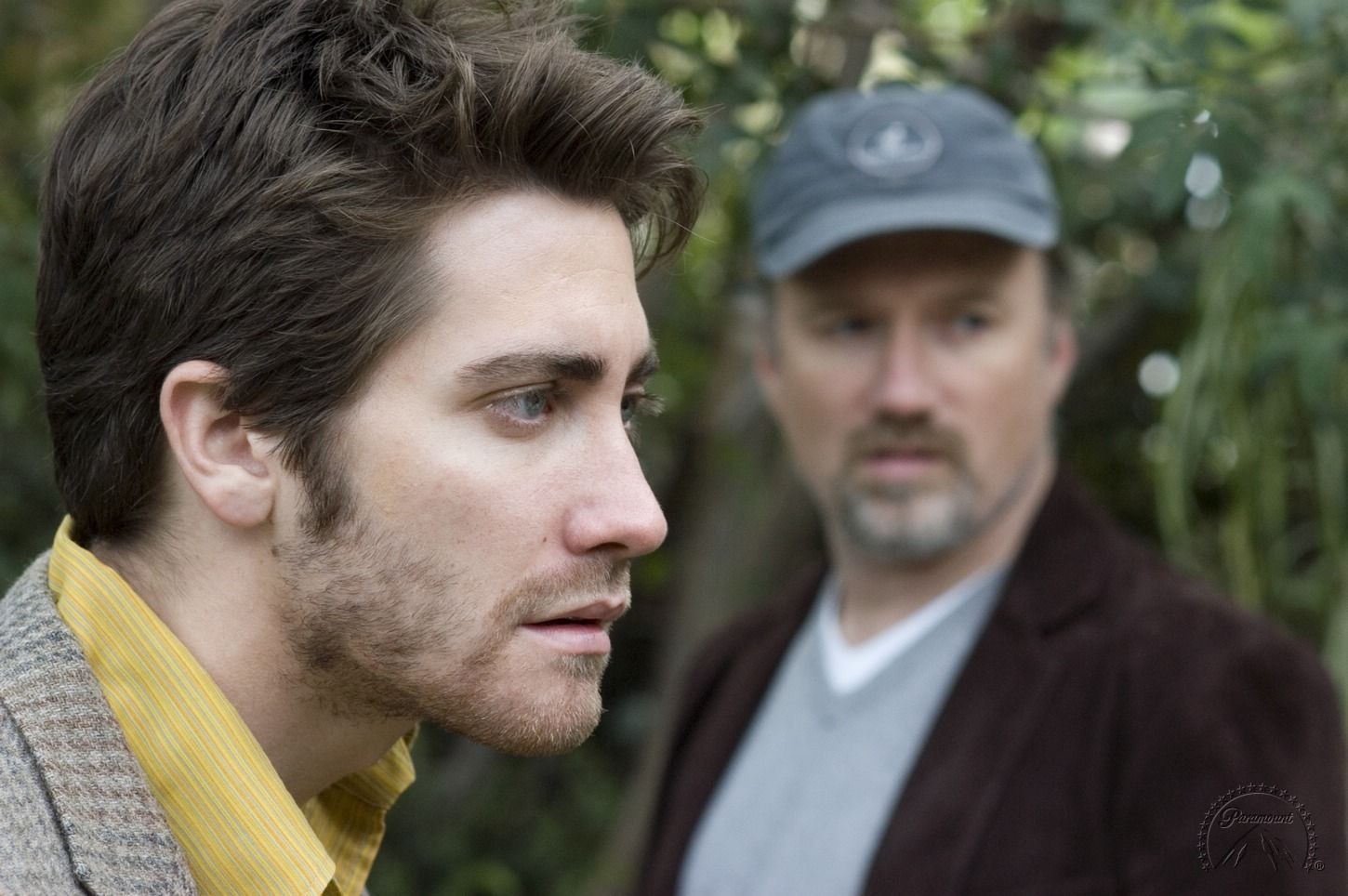 A David Fincher interview. Here you get a look at the editing of the film; Zodiac was shot mostly digitally using Viper Cam and then edited using Final Cut Pro (6) by Angus Wall (A.C.E.).

Documentary covering every aspect of the investigation, including interviews with the original investigators and surviving victims. From the Special Edition DVD of Zodiac special features. 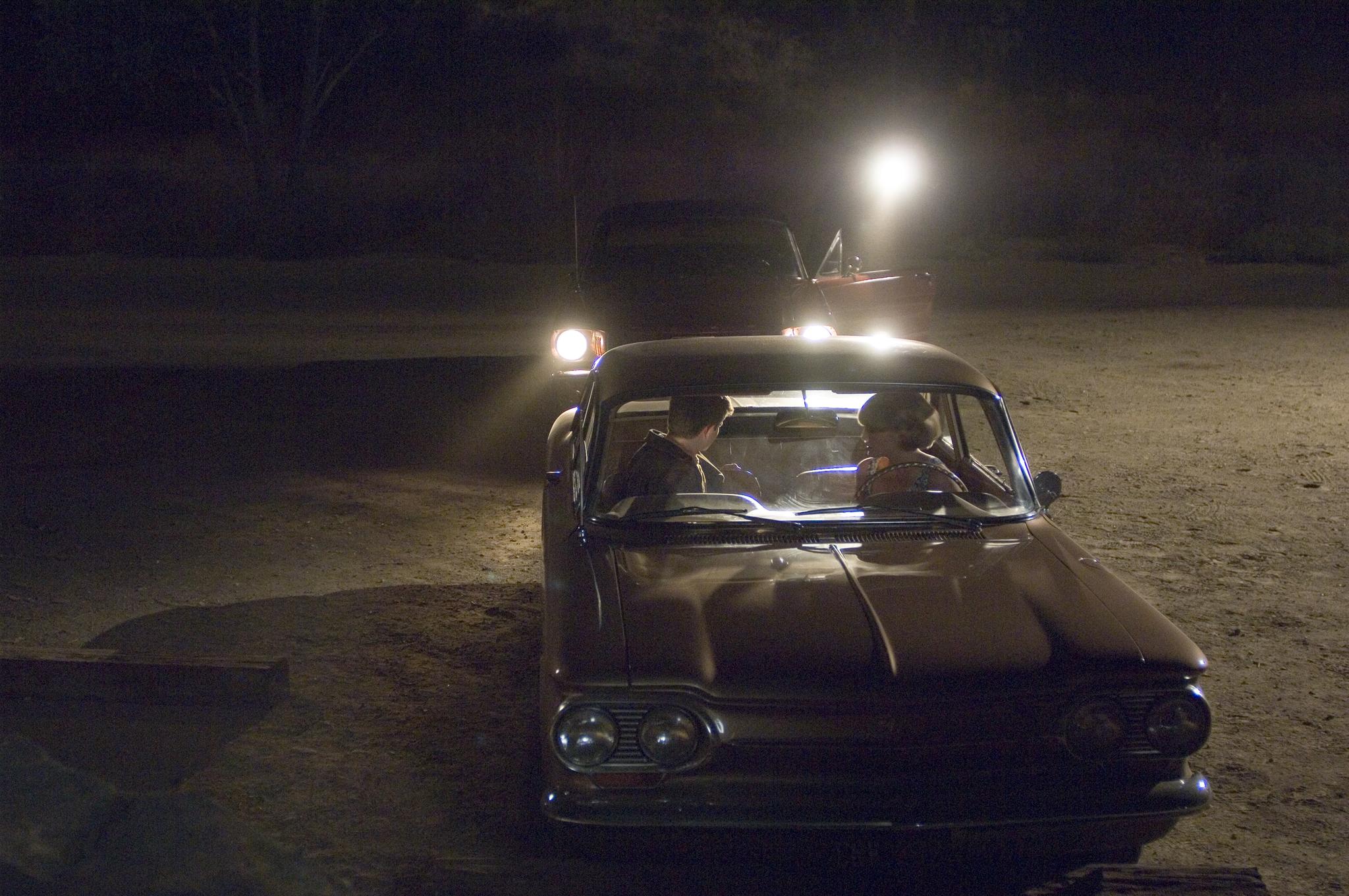 Josh Forrest put together an excellent supercut of every insert shot in Zodiac.

The fourth installment of The Directors Series’ examination into the films and career of director David Fincher, covering his first feature-length forays into digital filmmaking.

Zodiac is the story of how an obsessed cartoonist and a dedicated cop sacrificed everything to hunt a serial killer. This is the story of how a committed director and the cast he drove crazy created the most compelling movie of 2007. Total Film follows David Fincher from script to set to edit suite for the making of a modern classic.

Cinematographer Harris Savides, who died in 2012 at 55, was a poet of light. He shot some of the most stylistically striking movies of the last two decades: James Gray’s The Yards; Sofia Coppola’s Somewhere; Jonathan Glazer’s Birth; Noah Baumbach’s Greenberg; Gus Van Sant’s Elephant, Gerry and Last Days; David Fincher’s The Game and Zodiac. —In Remembrance of Harris Savides: 1957-2012

David Fincher joined Jonathan Groff and Holt McCallany on Charlie Rose to talk about his new series, why he keeps coming back to serial killers, and what he learned from Zodiac.

How does David Fincher make films? And what are his influences in that approach? What does making films mean to him?

I always wanted to give a lecture at filmschools. You go in and you see all these fresh faces, and you say: ‘You! Stand up, tell me your story. Tell me what your film is going to be about.’ And they start, and you go: ‘Shut up and sit the fuck down!’ And if they do, you go: ‘You’re not ready.’ Because the film business is filled with shut-up and sit-the-fuck-down. You got to be able to tell your story in spite of sit-down and shut-the-fuck-up. If you are going to let something like that derail you, what hope do you have against transportation department? What hope do you have against development executives?” —David Fincher

Here are several photos taken behind-the-scenes during production of David Fincher’s Zodiac. Photographed by Merrick Morton © Paramount Pictures. Intended for editorial use only. All material for educational and noncommercial purposes only.