I’ve earned the right to fail commercially, Steven Spielberg supposedly said after Empire of the Sun’s box office harvest failed to impress. Despite this considerable financial disappointment, Spielberg, however, got the chance to make a very personal, intimate film that took some time but found its way into hearts of millions. In our book, this is Spielberg at his best. Based on J. G. Ballard’s autobiographical novel of the same name, in which the British author recalls the part of his childhood spent in a Japanese war camp in China, Empire of the Sun is a wonderfully written, moving and inspiring, splendidly acted coming of age story of a boy forced to grow up too quickly, of a childish innocence destroyed amid the barb wires and brutal bombings of war-stricken China. The amazing screenplay was penned by Sir Tom Stoppard, the famous Czech-born British playwright-turned-screenwriter. Empire of the Sun is also remembered as Christian Bale’s first step in what turned out to be an accomplished Hollywood career, and his wunderkind performance was certainly helped by the mentorship from experienced John Malkovich and Miranda Richardson. Ever since he read Ballard’s novel, Spielberg was convinced he should make this story come to life, and when both Harold Becker and David Lean dropped out from the project, Spielberg was ready to take over the director’s seat. Even though the audience’s initial lack of interest upon release inevitably gave Spielberg some heartache, the final result—the birth of one of more unorthodox champions of war-themed cinema—signifies the effort paid off quite nicely.

Screenwriter must-read: Tom Stoppard’s magnificent screenplay for Empire of the Sun [PDF]. (NOTE: For educational and research purposes only). The DVD/Blu-ray of the film is available at Amazon and other online retailers. Absolutely our highest recommendation.

“If there’s anything God-given about writing, with me it’s the gift of dialogue,” says Tom Stoppard. “Not to be falsely self-deprecating about this in a nice English way: I know I write nice dialogue. But I don’t know how I write nice dialogue.” For the first time, the foremost British dramatist of his generation discusses screenwriting.

I gather something of that kind happened to you with Spielberg.
I don’t know many filmmakers intimately. Steven’s a friend. He is somebody who likes his friends to read what he’s got on his desk, and rightly or wrongly he likes to have comments. The thing is, I was asked to do Schindler’s List. I read the book and I wasn’t sure how to do it in a couple of hours. It just frightened me. Steven sent me Steve Zaillian’s script because that’s what Steven does. I should say that Zaillian is one of the writers I admire most—not just screenwriters—among writers. He hadn’t told Zaillian he was sending me the script—that would be unnecessary. So I read this script, and I wrote Steven a letter, which was quite cross. I said, “Look, I didn’t know how to do Schindler’s List, and Zaillian has done it. It’s an amazing piece of work. It’s incredibly economical and deft and in control. It’s ridiculous for you to send this script to someone else for comment. You should just shoot the sodding thing.” So he did. But he stubbed his toe on a scene while he was shooting. Zaillian was in the middle of another film by then, so he called me with Zaillian’s knowledge and, as it were, permission. It was just one little fragment. I was about to get into the bath, and where I lived at the time my desk was only six feet from the bathtub. I explained the problem; I could see the way to go on it and made a simple suggestion which he adopted. So I’m fond of saying I wrote that scene stark naked. I called Steven, and by the time I got into the bath it was done. If only all hang-ups in movies were that quick and easy. —Tom Stoppard’s secret screenwriting life 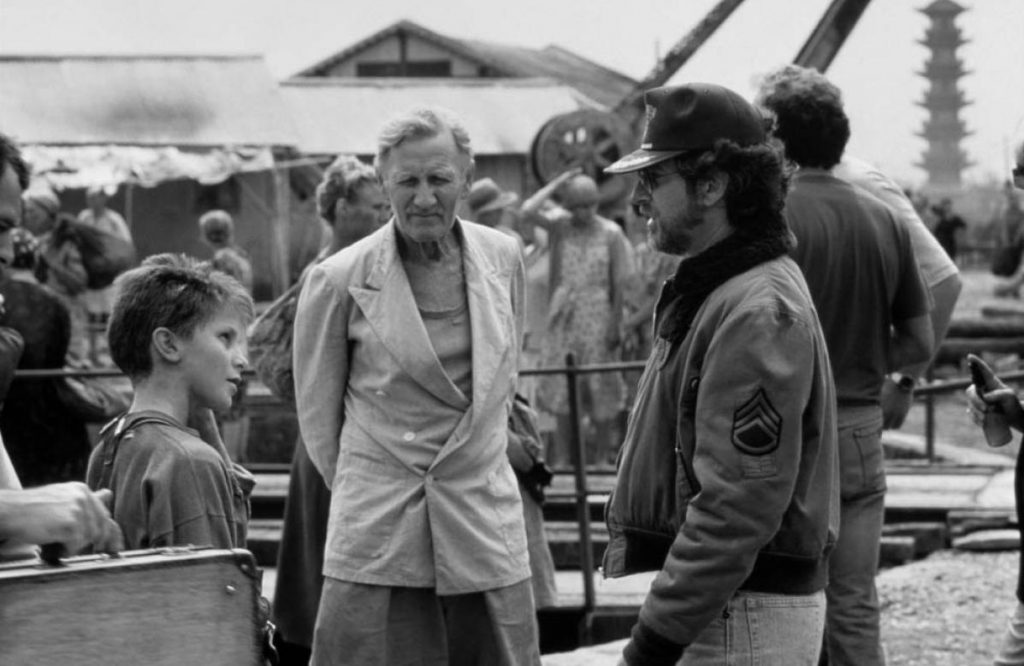 J.G. Ballard waited 40 years before writing about his experiences in a Japanese internment camp. Here he remembers how Hollywood hijacked his childhood memories to create a deeply moving film.

Surprisingly, it was the film premiere in Hollywood, the fount of most of our planet’s fantasies, that brought everything down to earth. A wonderful night for any novelist, and a reminder of the limits of the printed word. Sitting with the sober British contingent, surrounded by everyone from Dolly Parton to Sean Connery, I thought Spielberg’s film would be drowned by the shimmer of mink and the diamond glitter. But once the curtains parted the audience was gripped. Chevy Chase, sitting next to me, seemed to think he was watching a newsreel, crying: “Oh, oh…!” and leaping out of his seat as if ready to rush the screen in defence of young Bale. I was deeply moved by the film but, like every novelist, couldn’t help feeling that my memories had been hijacked by someone else’s. As the battle of Britain fighter ace Douglas Bader said when introduced to the cast of Reach for the Sky: “But they’re actors.” Actors of another kind play out our memories, performing on a stage inside our heads whenever we think of childhood, our first day at school, courtship and marriage. The longer we live—and it’s now 60 years since I reluctantly walked out of Lunghua camp—the more our repertory company emerges from the shadows and moves to the front of the stage. Spielberg’s film seems more truthful as the years pass. Christian Bale and John Malkovich join hands by the footlights with my real parents and my younger self, with the Japanese soldiers and American pilots, as a boy runs forever across a peaceful lawn towards the coming war. But perhaps, in the end, it’s all only a movie. —Look back at Empire 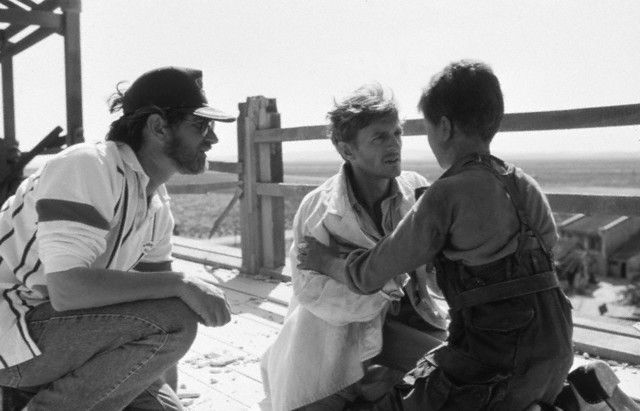 The China Odyssey: Empire of the Sun (1987)—a documentary which focuses on the translation of J.G. Ballard’s novel of war-time China, Empire of the Sun, into the film directed by Steven Spielberg. The program goes behind the scenes to show the filming process, and includes scenes from the movie, interviews with the author, director, and actors, and shows footage of the 1941 Japanese invasion of Shanghai.

On the set of Empire of the Sun. Photographed by Murray Close © Amblin Entertainment, Warner Bros. Intended for editorial use only. All material for educational and noncommercial purposes only. 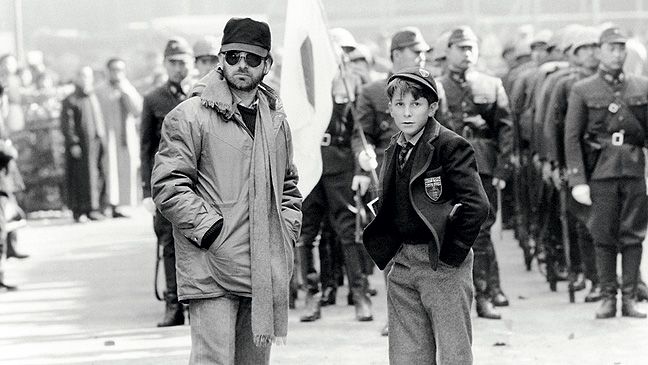 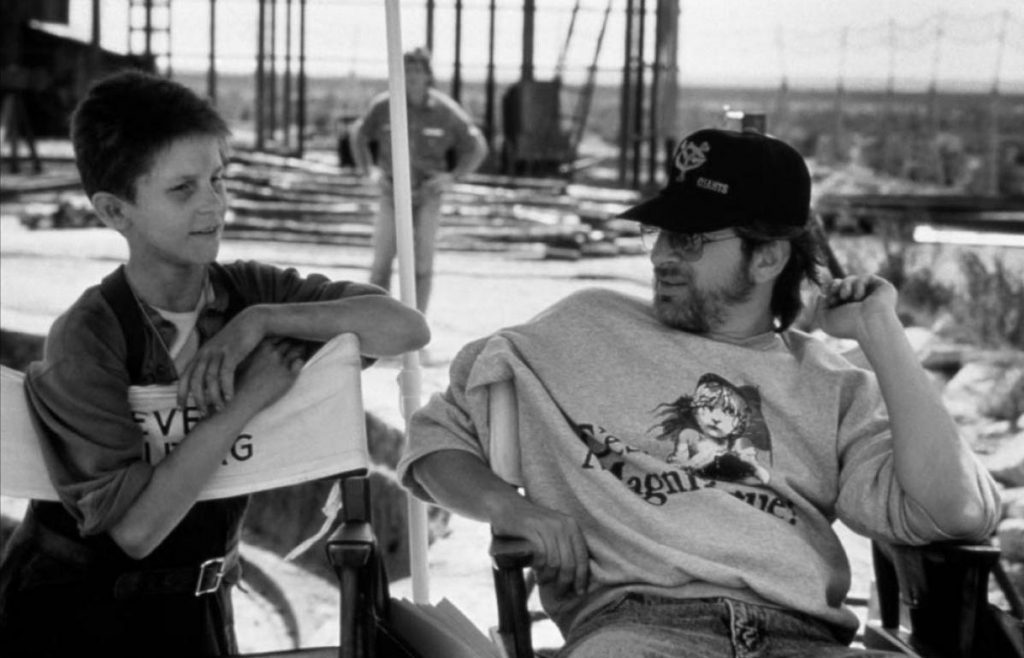 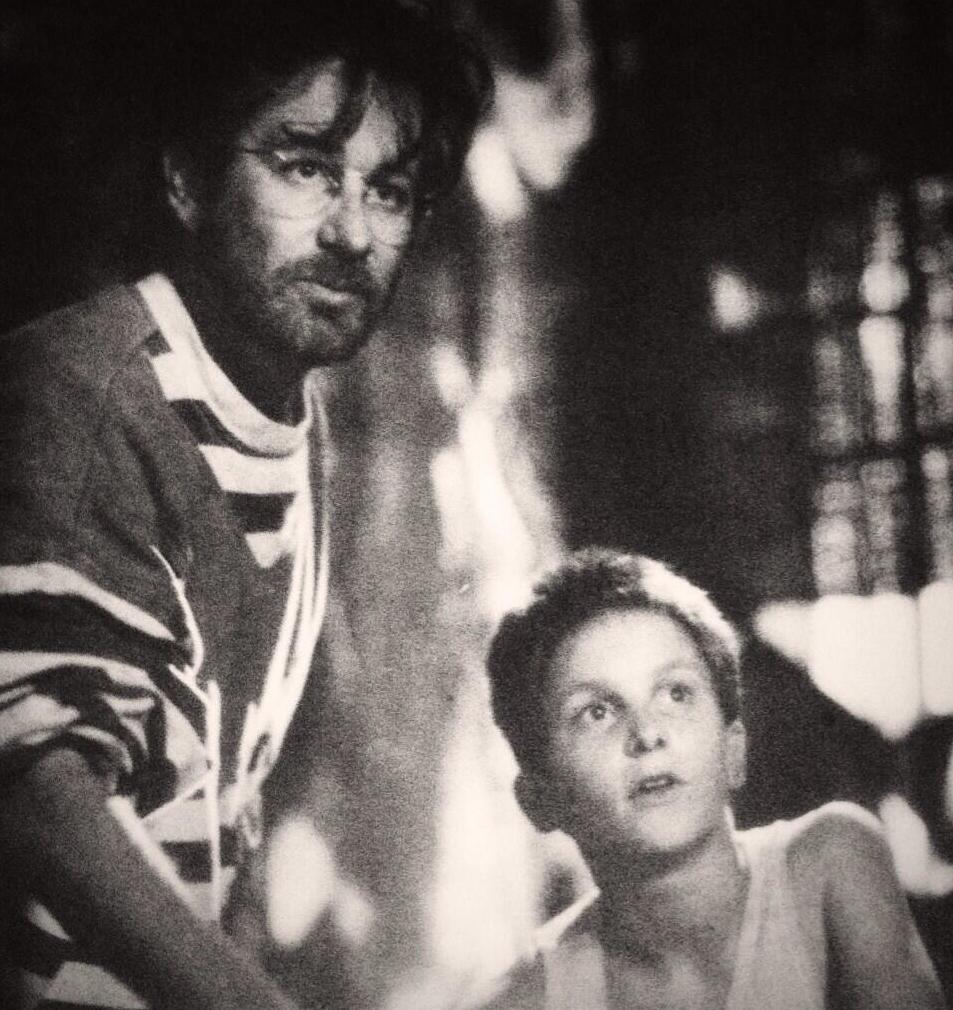 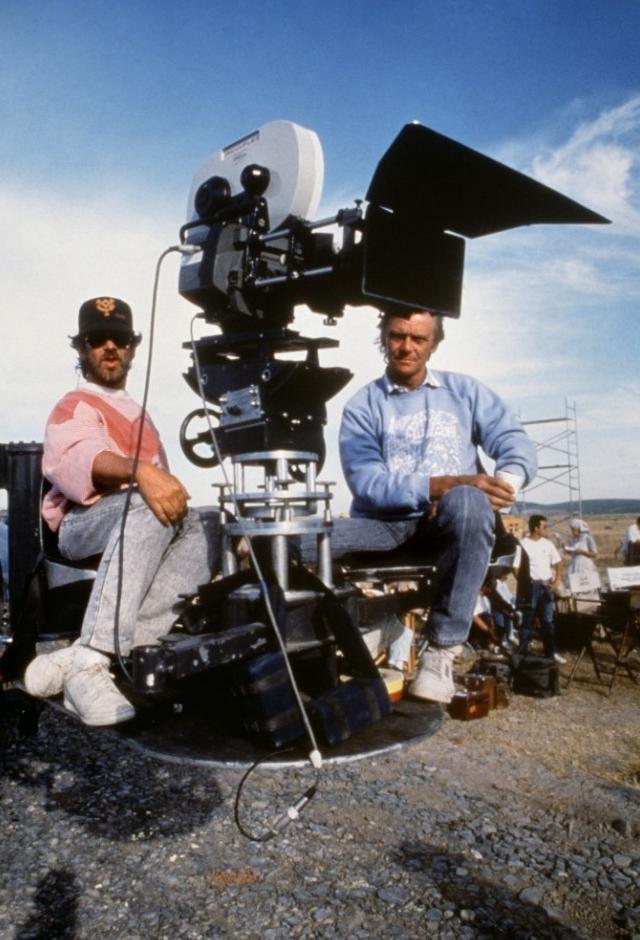 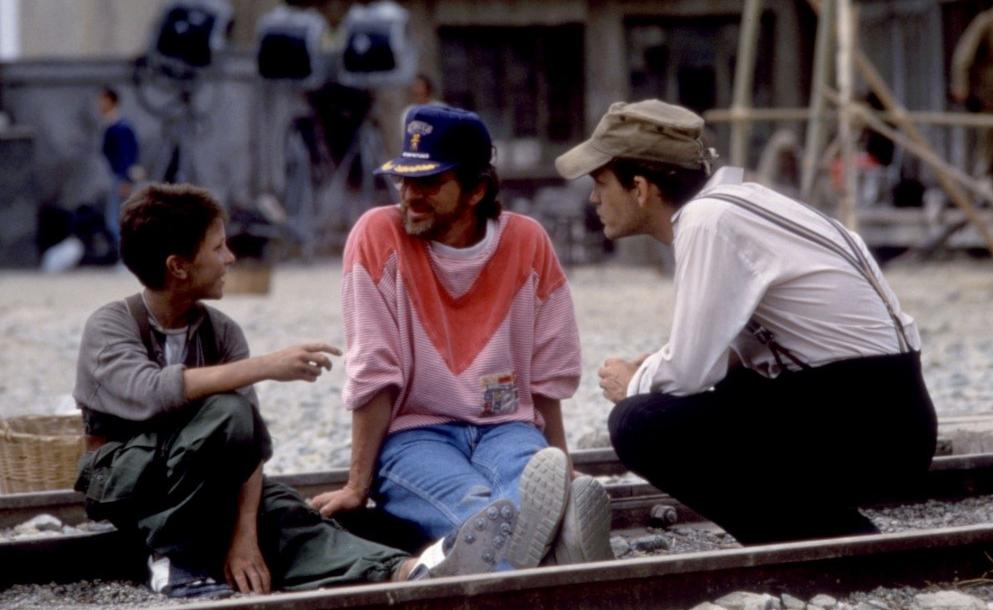 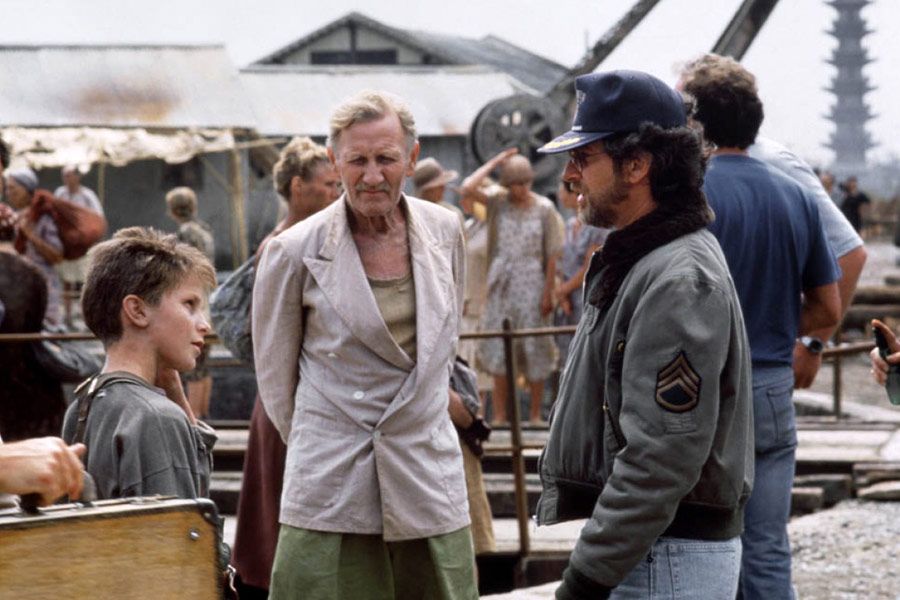 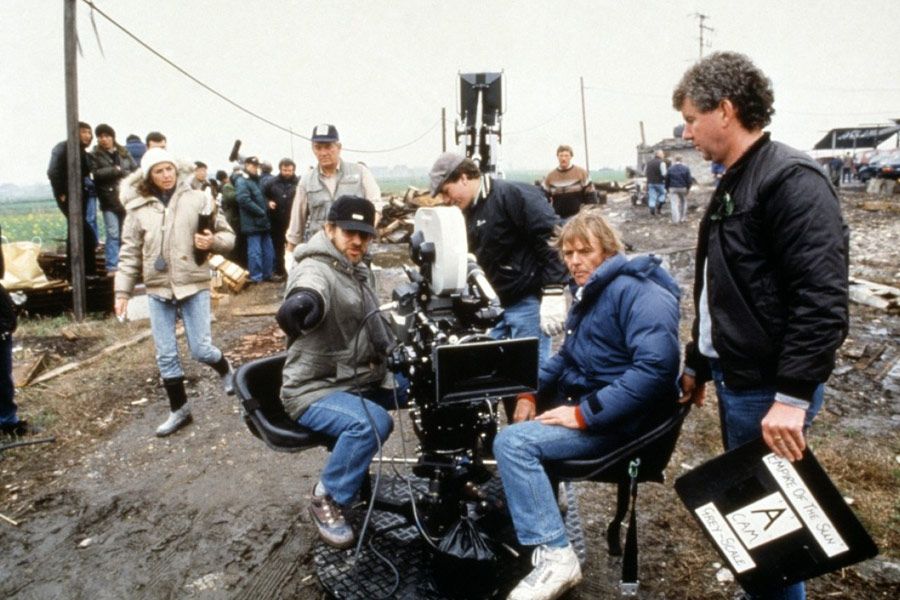