Don Winslow, one of the leading crime novelists in the United States today, knew what he wanted to do in life at the age of six, growing up in a book-loving family in the small town of Perryville, Rhode Island. Reading books and writing stories was hardly only a passion for him—it was his ticket to the big world waiting for him outside of Rhode Island. He had talent—that’s pretty much evident to anyone who bothered to read at least a paragraph from any of Winslow’s many novels published in the last quarter of a century—but absorbed and made the best out of a crucial but undeniably sound truth about being a writer. Without proper work ethic, discipline and the capability of making sacrifices and dedicating yourself fully to the task at hand, sheer talent will get you nowhere. Talent and commitment, on the other hand, might get you to places you never even dared to dream of from your book-stacked tiny bedrooms in whichever Perryville of the world you happened to grow up in.

Today, 24 years since his first novel A Cool Breeze on the Underground was published, Don Winslow is a well-respected, highly successful and incredibly prolific author with 17 critically acclaimed novels behind him. He is a sought-out commodity in the ever-blooming film business as well. In 2012, film lovers around the world had the chance to see Savages, Oliver Stone’s film based on Winslow’s novel of the same name (2010), and Winslow himself, alongside experienced filmmaker Shane Salerno, acted as the screenwriter. The film received outstanding reviews from some of the most influential film critics in the business, such as Roger Ebert. The Death and Life of Bobby Z (1997) was turned into a thriller with Paul Walker and Laurence Fishburne. Satori is about to be transferred to the screen with the magnificent Leo DiCaprio in the starring role with Winslow and Salerno adapting the material for the big screen. The Winter of Frankie Machine (2006) was supposed to be directed by the great Martin Scorsese at one point, and later even Michael Mann was attached to the project. The novel fascinated Robert De Niro to the degree that he even had a change of heart regarding starring in another one of the gangster films that have characterized his entire career. Even though the project still hasn’t seen the light of day, we’ve never witnessed the screenwriting community unanimously praise a script as much as they’ve done for Brian Koppelman and David Levien’s screenplay for this film. Whatever happens to the project, we’re absolutely positive it’s only a matter of time before Frankie Machine shakes Hollywood up. Both the past and the present of Don Winslow seem rather impressive, but as he continues telling his stories and satisfying the insatiable appetites of millions of his readers, the future for this crime novel prodigy looks even brighter. 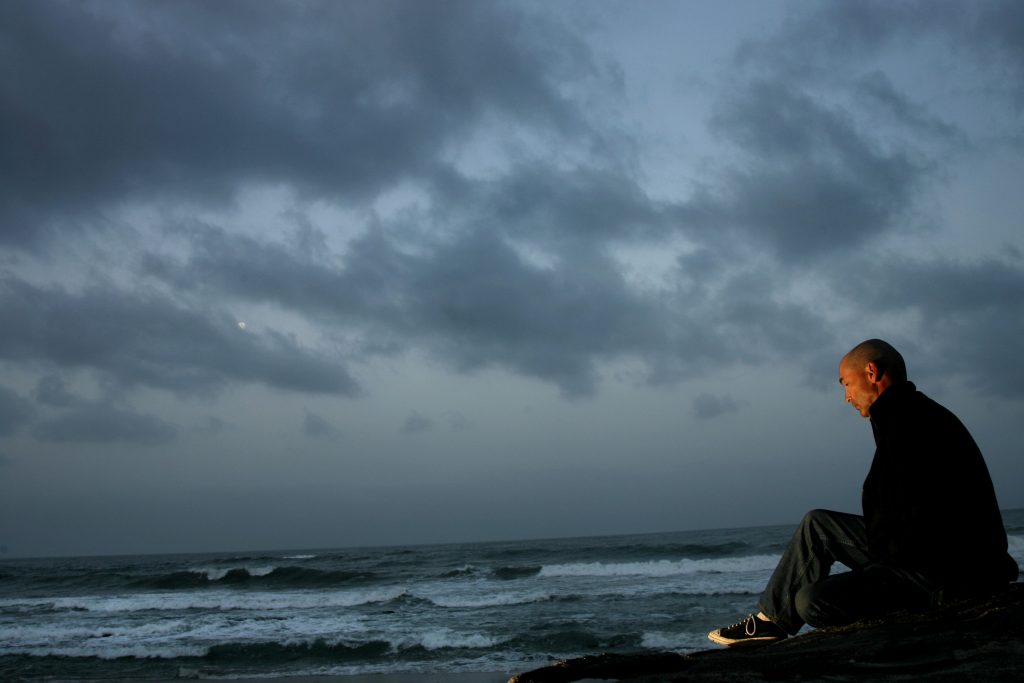 Winslow’s career in Hollywood seems to have taken a lift-off when he met, befriended and started working with Shane Salerno, an experienced screenwriter, producer and director in Los Angeles’ dream factory. The flourishing author thus joined forces with a skilled filmmaker who worked on blockbusters such as Armageddon and Shaft, who’s scripting James Cameron’s fourth installment in the Avatar series, who co-wrote The Private War of J.D. Salinger with author David Shields, and authored, directed and produced the fascinating documentary Salinger on the life of the legendary American author. Salerno, via his production company The Story Factory, produced literally all of the films based on Winslow’s novels. Their friendship and collaboration lies in the very heart of this fruitful period of this author’s career in filmmaking.

Shane is by far the more experienced screenwriter and really brings that expertise to the table. He’s also extraordinarily creative—I really don’t know how his mind works, but I marvel it sometimes. I think Shane and I work so well together because we have mutual respect for each other’s talent and share the same discipline when it comes to how many hours we put in every day. Also, we laugh a lot, which is essential. —Don Winslow

Their strong friendship is not only the basis of their rewarding partnership—it’s an object of admiration and source of inspiration and motivation for us, as well. This creative writer-producer-friend indestructible collaboration is very refreshing and comforting to see in an industry as chaotic and profit-oriented as the movie business.

Don Winslow’s latest novel is about to hit the shelves. The Cartel, the much anticipated sequel to the universally loved The Power of the Dog, is a story of a DEA agent going up against the head of Mexico’s most vicious gang who killed his partner. Initial reviews suggest we’re in for another treat. Winslow, “who is to the Mexican drug wars what James Ellroy is to L.A. Noir,” as the New York Times brilliantly put it, not only charmed the critics, but seems to have delighted even his very own literary heroes, which must bring him a special kind of personal satisfaction. James Ellroy called The Cartel “the War and Peace of dopewar books,” Harlan Coben labeled it “an absolute must-read,” Michael Connelly thought it was “a first rate edge-of-your-seat thriller” that both “educates and entertains,” while Lee Child simply called it “sensationally good.” These are extremely heavy words considering who they are coming from. 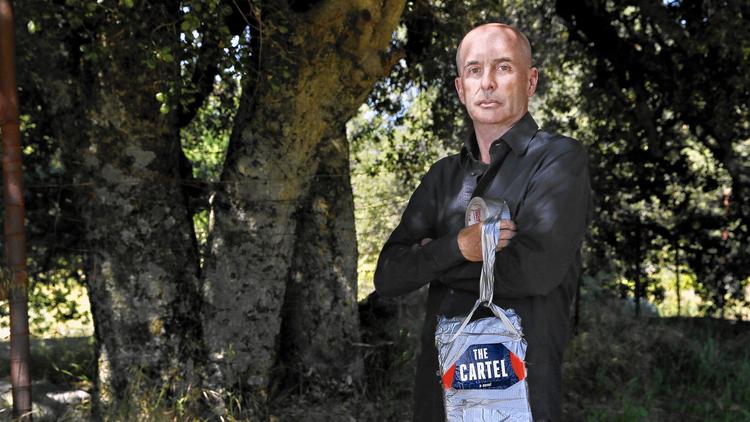 But for all of you who are familiar with his work, these kind of reviews, as enthusiastic and encouraging as they might be, aren’t really necessary. With Winslow, you know what level of quality you should expect. The leading American thriller writer of his generation built his success upon hard work and perspiration, fueled by the same spark that made him engage literature in the earliest of days. The extensive research and effort he incorporates into his creative process is a marvel to read about. But just as importantly, what emanates from his writing and the interviews we’ve seen so far is a sense of humanity, of emotions under the surface, of the ever-going ambition to understand society, what drives people to do what they do, to explore what’s in their nature that makes them behave the way people have been behaving from the dawn of time. It doesn’t surprise us that Winslow dedicated The Cartel to all the journalists who were killed in Mexico for having the ambition and courage to tell the truth about the cartels, drug wars and crime. Modestly acknowledging the fact that he’s lucky to be able to tell his stories safely from behind a desk in the US, Winslow pays tribute to the fallen heroes whose deaths largely fade away from the newspapers unnoticed by the majority of people. It’s this warmth and compassion that makes Winslow one of the best contemporary novelists just as much as his writing does.

Winslow’s attitude towards writing and the responsibility he feels to be true to the material he uses in his stories is nowhere as evident as in the case of his two latest, back-to-back novels. To create The Power of the Dog and The Cartel, Winslow spent a full decade researching, at the same time utilizing his training as a historian. He built a chronology of the drug war, relentlessly going through the materials, jotting down dates of every event that occurred. He went went out of his way to interview drug traffickers, FBI personnel, DEA agents, intelligence agents, Counter Terrorism Drug Task Force, attorneys, dozens of police officers. To explore the root of the problem, he went as far as Aztec and Mayan history, dedicated to creating an authentic, historically accurate narrative that illuminates and educates as much as it entertains and satisfies the reader’s hunger.

Winslow and Salerno are developing plans for setting up a two-film epic story based on The Power of the Dog and The Cartel. The screenplay for the first one has already been co-written by Salerno and the team behind the Oscar nominee A Royal Affair, Nikolaj Arcel and Rasmus Heisterberg. This will be a glorious take on the drug war that spans half a century with the always captivating motif of two mortal enemies at the core of the story. It’s fascinating to see how Winslow’s novel will come to life visually, and given the writer’s confident walk to the top, we won’t be a bit surprised if the best actors Hollywood has to offer soon fight for a place in these adaptations.

A must read for me was Don Winslow’s THE CARTEL. He’s the best thriller writer around and this is as good As it gets.

Whatever you feel gives life to the books of Don Winslow—be it nail-biting action scenes, detailed and thought-out characterizations of the people at the center of his stories or the abundance of details that lends his writing astonishing authenticity and credibility—one thing remains rather certain. The Cartel is going to blow our minds and leave us wanting for more. But judging by the author’s work-rate, addictedness to writing and attitude towards the profession he respects and treasures, we probably won’t have to wait too long.

“THE CARTEL…a magnum opus coming in June from Don Winslow, who is to the Mexican drug wars what James Ellroy is to L.A. Noir. It’s a long-awaited sequel to one of his greatest, The Power of the Dog.” —Janet Maslin, New York Times

“You don’t have to read Don Winslow’s The Power of the Dog to get swept away by THE CARTEL, its ripped-from-the-headlines sequel, but you should. You should try to get your hands on everything Winslow’s written, because he’s one of the best thriller writers on the planet. You’ve read the headlines about the decapitations in Juárez, the kidnappings in Mexico City, the mass graves and battling cartels and corrupt politicians and police, the daily casualties of the Mexican-American drug wars, which made you second-guess that Club Med vacation. An epic, gritty south-of-the-border Godfather for our time.”
—Benjamin Percy, Esquire

“Clearly one of the most ambitious and most accomplished crime novels to appear in the last 15 years, THE CARTEL will likely retain that distinction even as the twenty-first century grinds on.” —Bill Ott, Booklist

“THE CARTEL [is] as much a work of meticulous journalism as artful fiction.”
—Anna Mundow, Barnes and Noble

“Winslow’s masterly sequel to The Power of the Dog continues his epic story of the Mexican drug wars. This exhaustively researched novel elucidates not just the situation in Mexico but the consequences of our own disastrous 40-year “war on drugs.” —Publishers Weekly

“Don Winslow delivers his longest and finest novel yet in THE CARTEL. This is the War and Peace of dopewar books. Tense, brutal, wildly atmospheric, stunningly plotted, deeply etched.” —James Ellroy

“THE CARTEL is a first rate edge-of-your-seat thriller for sure, but it also continues Winslow’s incisive reporting on the dangers and intricacies of the world we live in. There is no higher mark for a storyteller than to both educate and entertain. With Winslow these aspects are entwined like strands of DNA. He’s a master and this book proves it once again.” —Michael Connelly

“Sensationally good, even after the near-perfection of The Power of the Dog. Less of a sequel than an integral part of a solid-gold whole.” —Lee Child

“THE CARTEL is a gut-punch of a novel. Big, ambitious, violent and widely entertaining, Don Winslow’s latest is an absolute must-read.” —Harlan Coben 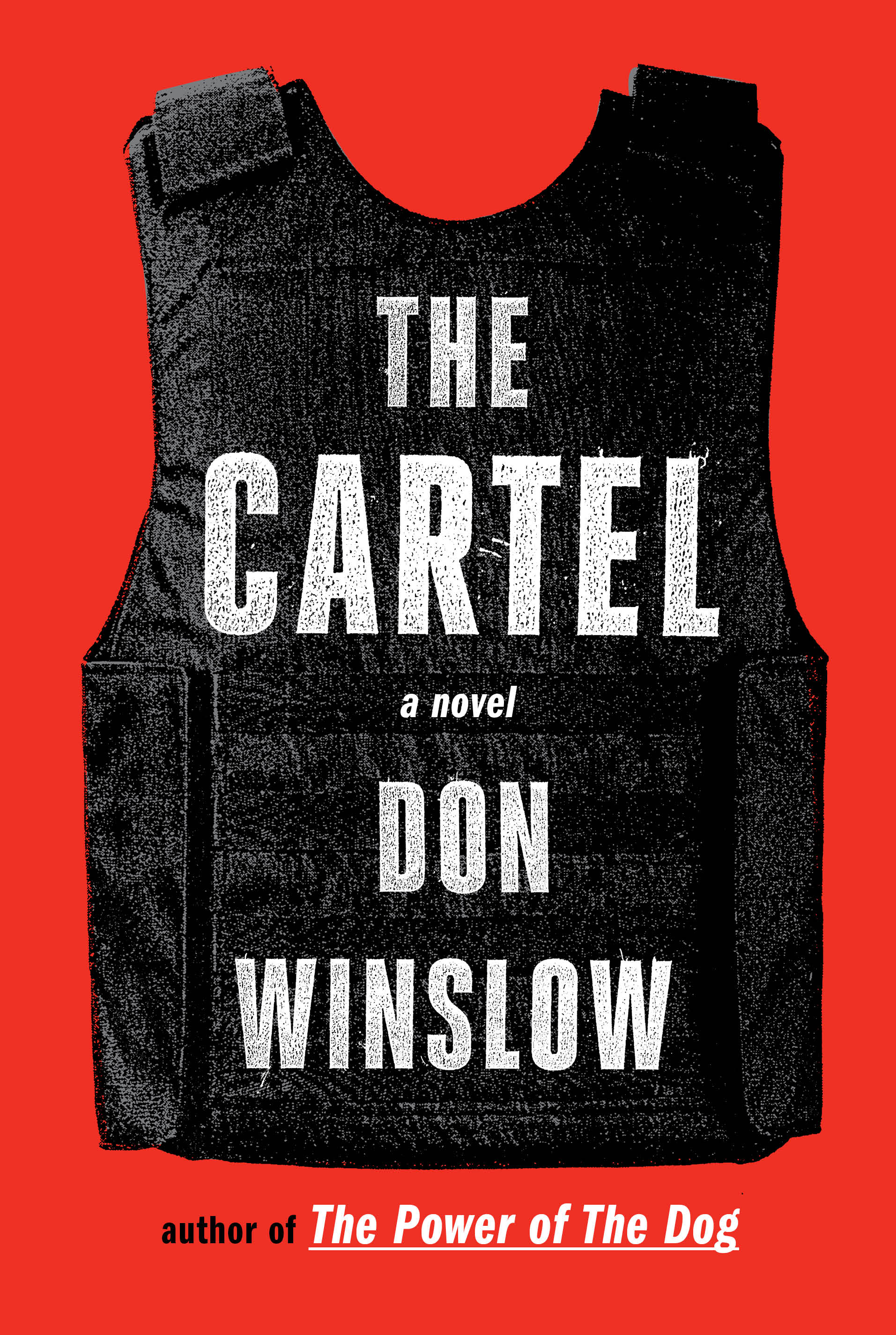 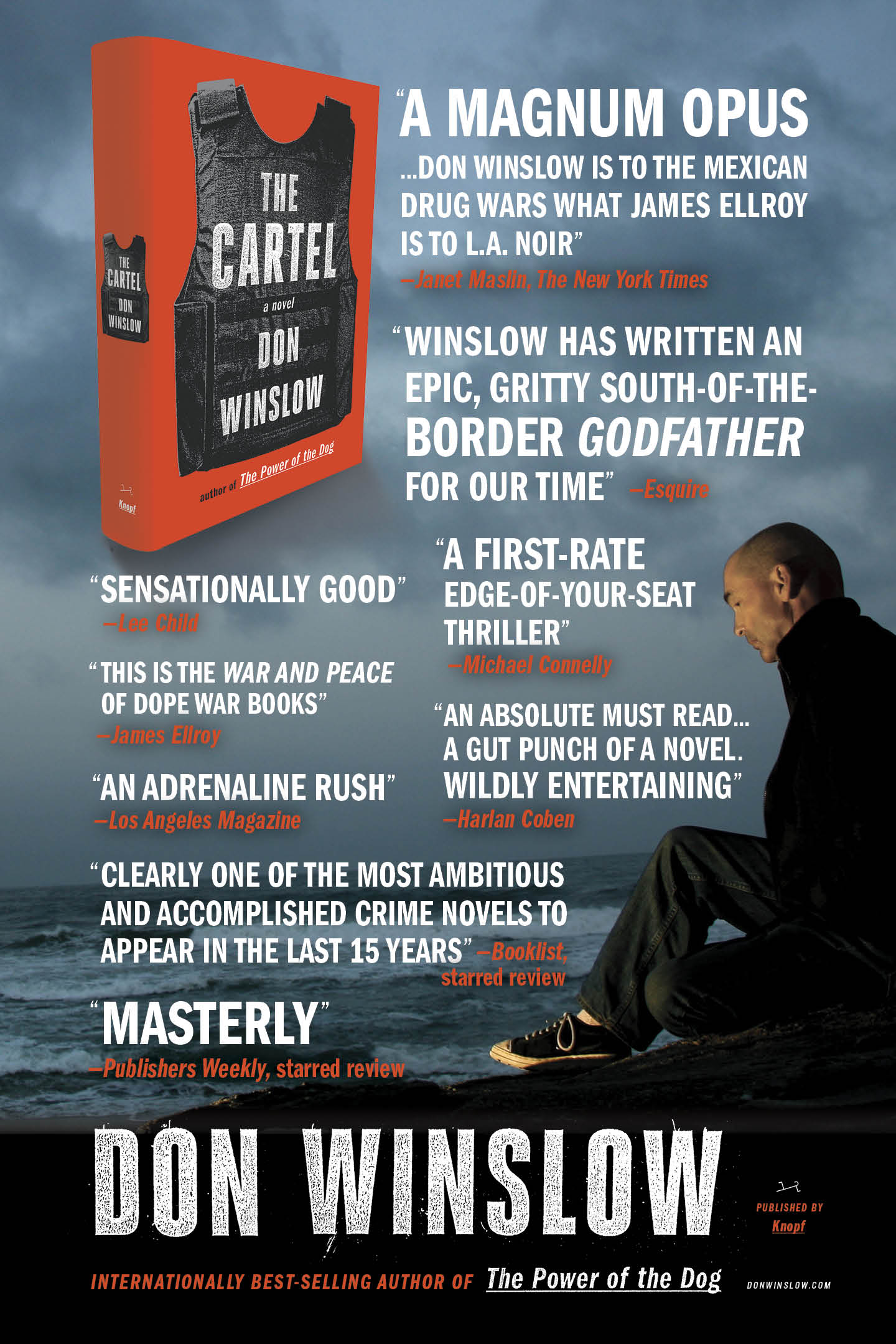