This article reveals the ending.

When I first saw Dario Argento’s Opera (released in England on video as Terror at the Opera, 1987) the sense of unease and vulnerability I experienced was unlike anything I’d felt from a film in a long time. I was struck by how the director played with mystery/horror genre conventions and his extraordinary use of multiple point of view angles. Argento seemed to be sensitive to specific anxieties and desires within the intelligent horror spectator. We all want to have our own understanding of the plot, and identify to some extent with the main character, yet Argento’s goal seemed to be to pursue his own warped, philosophical vision.

The film offers a range of possible suspects then eliminates each one until the killer is revealed. Argento quickly disregards any attempt at naturalism. His dubbed actors are ‘types,’ as visually striking as his sets and imagery; there’s the self-obsessed young film director, Marco; the insecure young opera singer, Betty; the smooth police inspector, Santini; the tempestuous, older opera star. Argento knows the mystery format, but what he’s really interested in is the main character’s mental state.

“I can’t decide whether it’s just a dream, or the memory of something that’s really happened,” Betty tells her director, Marco. This is the key line of the film. Betty’s confused state is integral to the story, connecting her to the dreams and flashbacks throughout the film. 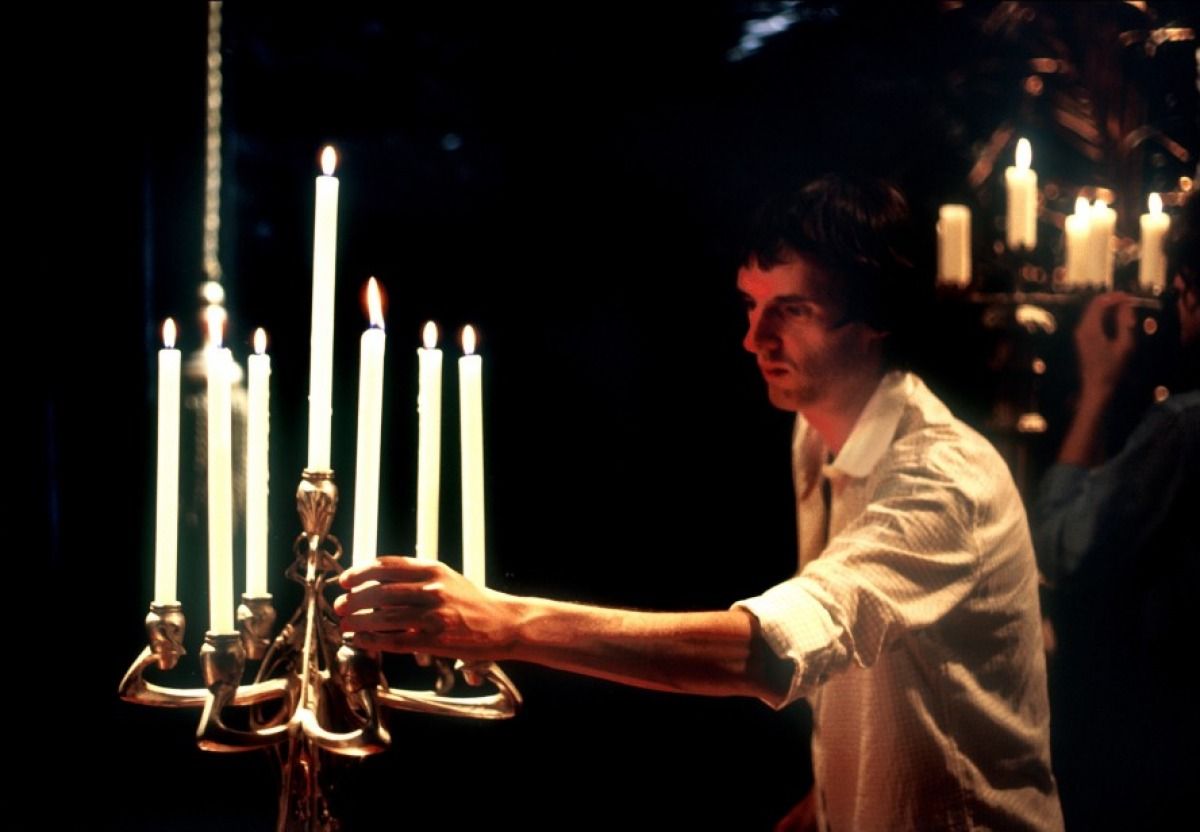 Argento’s discourse tests the boundaries of the real and the imaginary, of dreams and waking life, and on-stage theatrics and backstage reality through a powerful system of provocative visual strategies. Opera also refers to his previous Giallo films, which also transcend the codes of the thriller genre with his own unique and irrational flourishes. Here is a subversive mind at work.

The story: young Betty’s debut as the star of an Avant-Garde version of Giuseppe Verdi’s Macbeth is disrupted when an obsessive serial killer makes her witness the grisly murders of the people around her. We see these acts through Betty’s eyes. In an early scene, she is preparing to make her debut as Lady Macbeth. The camera glides into her room, into a ringing phone. A wide establishing angle relieves the tension, allowing Betty to take the call and fall back onto the bed, but not before the camera begins prowling again, into her troubled face. The use of POV shots moves this sequence into recognizable slasher territory, but the bearer of the look this time is Mia, her assistant. We relax for a moment, while Argento gradually conditions us into an unsafe cinematic realm.

The killer is clearly a voyeur and fetishist, unwilling to defile or destroy Betty, the object of his pathological fantasies. The true fetishist will always turn his back on reality, and the film pinpoints the source of the dysfunction, retreating to inside his own damaged brain. The first murder is stressful and urgent, as Betty’s taped open eyes are forced to watch. We are subjected to Betty’s unrelieved POV of the crime, through sharp pins about to lacerate the eyeballs if she shuts them. Hyper-sexual fantasies motivate Argento’s killer. 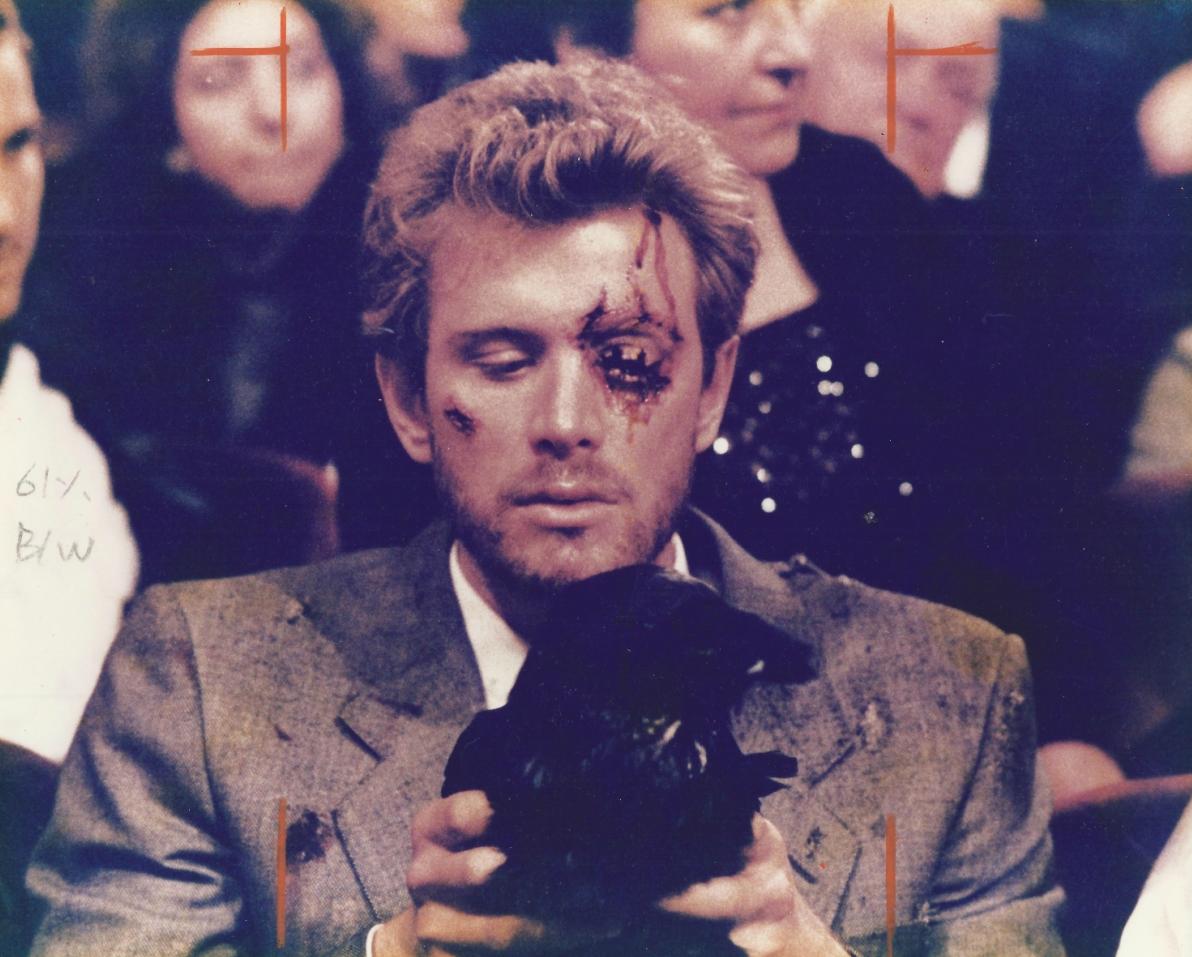 As these bizarre crimes unfold, we yearn for the mystery to be resolved. We want the ‘evil’ black-clad figure to be uncovered (similar figures appear in Deep Red, Tenebrae, and The Bird with the Crystal Plumage).

More visual displacement follows: the mysterious stalker is seen in the obscure foreground observing Betty on stage (through a TV monitor). “You finally returned,” the distorted voiceover says before we spiral down into a stone stairwell, a subjective image, or a detonated memory in the killer’s mind. We try to process this, as Bill Wyman’s and Roger Eno’s electronic themes contrast with the dominant opera music score. The use of repetitive themes here are reminiscent of Goblin’s music for Deep Red (the child witnessing the murder of the father) and Tenebrae (the woman assaulted on the beach turning around to humiliate her impotent attacker). We wonder if we are to experience all such POV shots through this unidentifiable, distorted perspective? The stress is on us to find a coherent viewpoint, to help us keep up with events. But at the same time, consciously or not, Argento confuses us and we ask ourselves how we can rationalize with Betty’s plight, while at the same time vicariously experiencing the murderer’s point of view?

More strange shifts in time and place occur in the film’s resolution. Betty and her director, Marco recuperate at a Swiss mountain retreat. We find ourselves looking through Marco’s video camera eyepiece as he tries to film a shot of a fly attached to a wire. The dark tortured fly hovers over the beautiful Alps, a warning shadow of chaos still to come. Then, we see two dogs running across the field in unison. We learn that these are police dogs, but the sense that we are still ruled by inexplicable forces pervades the atmosphere. 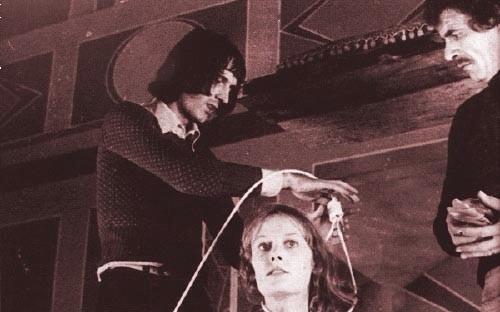 It’s worth pointing out here that Argento is often referred to as a stylist. Yet I would argue that Argento’s early work is driven solely by his imagination. Far too many contemporary horror directors’ motivation appears to be to make another film like another film. I am certain that they are primarily interested in style; their overwrought approach fails to tell the story simply, and relies on self-conscious camera work and elaborate editing and post-production color grading. Sometimes these films are so de-saturated by over-zealous graders that the work of the cinematographer is reduced to a uniform sepia/blue/grey or teal/orange palette, which has very little to do with advancing the story or the objective of any particular scene in question and more to do with emulating the look of other contemporary horror films. Just look at the vivid use of lighting and color in Argento’s Inferno or Suspiria: challenging the validity of the main character’s experience. Argento is not the sort of director who submits his film to an overall color wash.

Looking at the intricate editing of murder set-pieces in Deep Red and Opera, we see a precise and meaningful strategy. Betty’s assistant, Mia is killed by a bullet through the eye, trying to clearly see the mysterious policeman through the door’s spy hole—seeing clearly seems to be the recurring theme of this film. Few directors can realize a scene such as this with such an assured control of montage.

Sadly, the majority of horror films satisfy more conventional expectations and desires: the need to see people being mutilated and killed is one. A voyeuristic and sadistic perspective guides bad horror films. We do not feel vulnerable or displaced—we hardly feel anything at all. The point seems to be to wallow in perversion and destruction. Argento’s work allows us to experience a more vulnerable and masochistic gaze. This feeling of unease is experienced through the on-screen victim’s eyes. 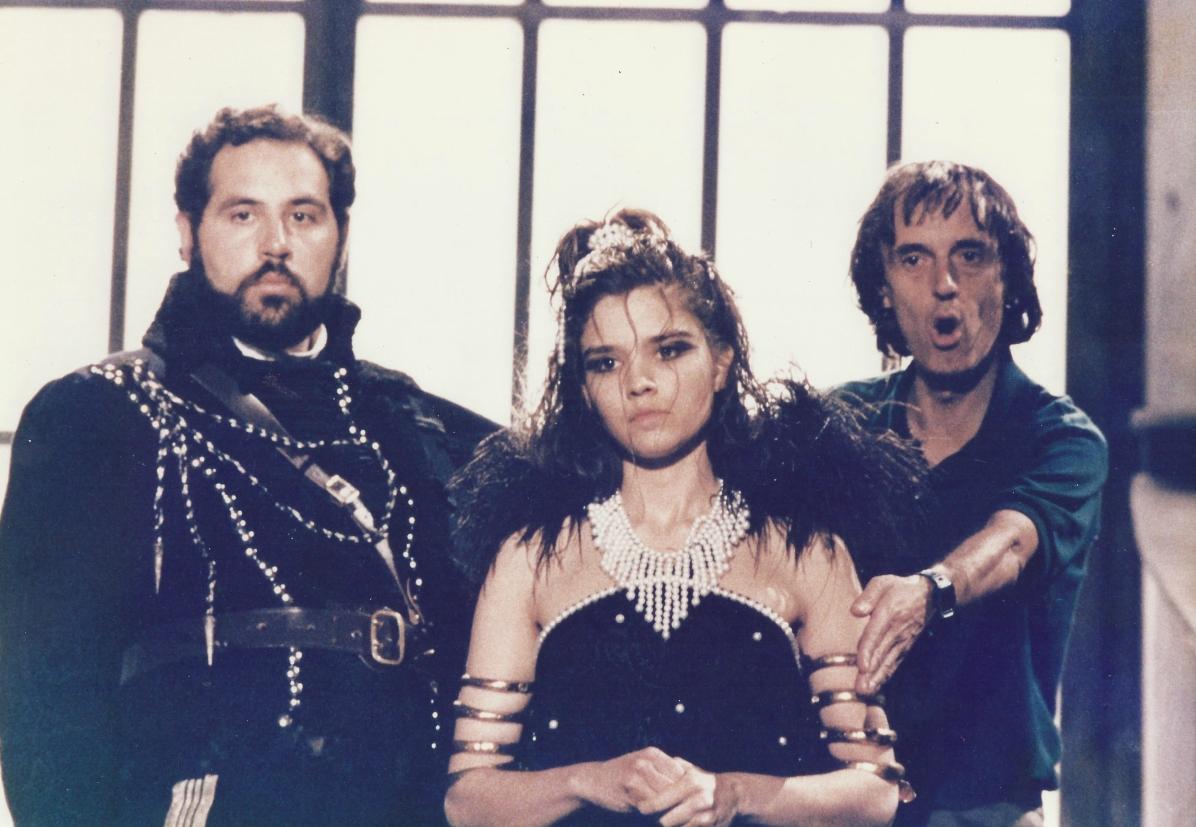 I would liken the experience of seeing Opera to Michael Powell’s Peeping Tom. Mark’s criminal 16mm camera footage is provocative and perverse. But the gaze is displaced and weakened when we see home movies from his childhood. He is not entirely responsible for these films; he is the subject of abuse (justified by his own father as scientific research). We begin to sympathize with Mark.

As in Peeping Tom, Argento highlights the mechanics of a creative production. His setting is backstage, and one of his leads is a film director working on a modern production of Verdi’s Macbeth. Michael Powell observes the making of a Romantic Comedy in his murder story. Both films use our awareness of the filmmaker’s presence, creating an unreliable gaze.

In Opera and Peeping Tom, the detective/mystery movie elements engage the audience. We are in place behind the camera in Peeping Tom. We know that Mark is the killer. The real problem rests in our own complicity and reaction to his intrusive, murderous gaze. The killer’s flashbacks in Opera seem unrelated when we first read the sequences, but at the same time, the very discontinuities of the shots are as problematic as Peeping Tom’s: effectively, the spectator connects the thoughts of Betty and the mystery killer. And the resolution of the story reveals there is a connection between them after all. 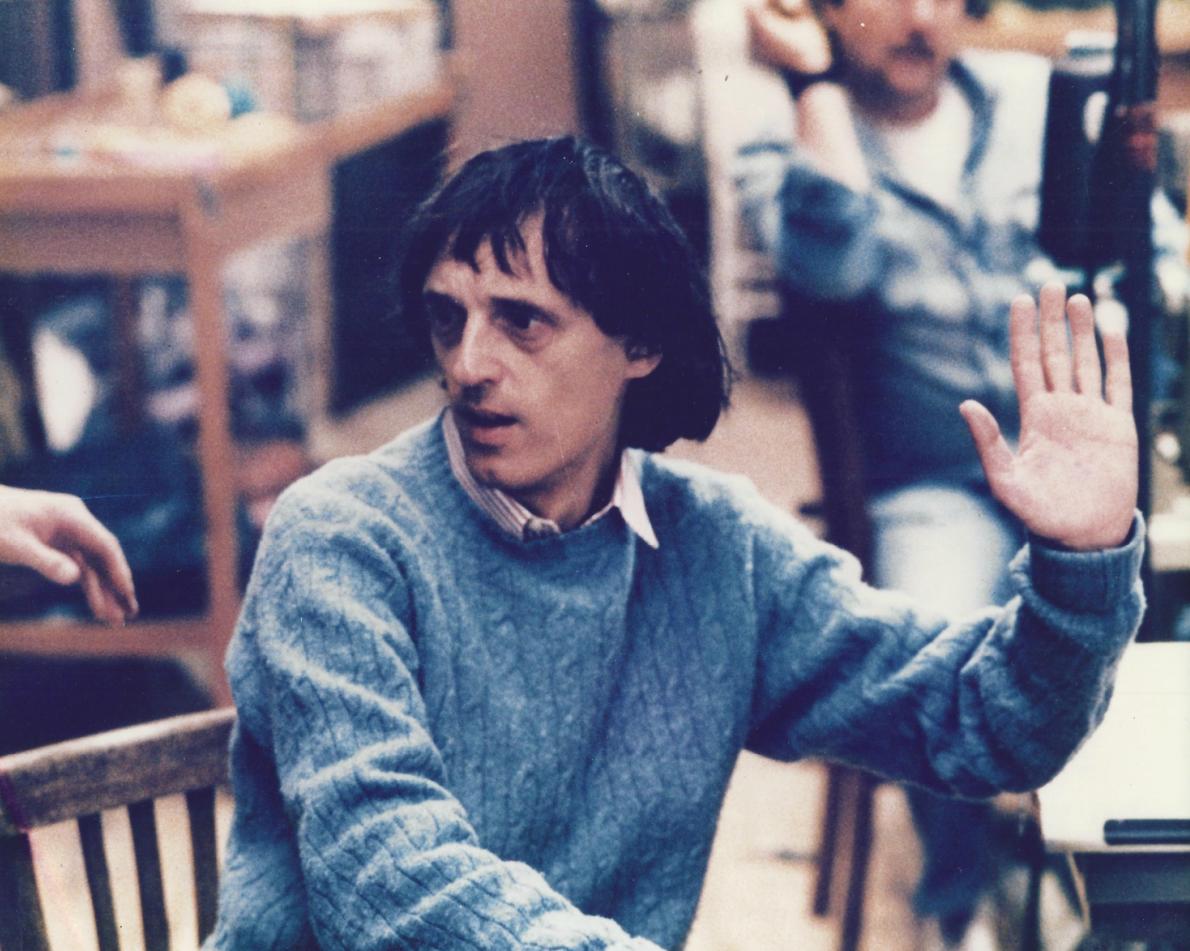 Betty experiences the terror vicariously; witnessing the killings with her eyes taped open, seeing the violence as a spectator. She brings the killings to her. The final denouement emphasizes this point by likening her to her sadistic mother. Here, Argento’s alternative storytelling method is contrived, but also psychologically truthful as we realize Betty’s gaze is complicit in the killings. Might we be seeing her interior mental landscape in the aforementioned point of view shots?

Demented and dreamlike, the ending of Opera was controversial at the time. I think that Argento bravely avoided cliché here, exploring the trauma Betty has suffered. After Betty tells the policeman that she managed to distract the killer by telling him “a lot of nonsense, a lot of lies,” and dismisses him as “a madman… totally crazy,” she decides to play in the long grass.

“I no longer wanted to see anybody,” she tells us. “I wanted to escape altogether, because I am different. I like the wind, butterflies, flowers, leaves, insects, the rain, clouds…” She cups a small lizard in her hands: “There my beauty… go free!” 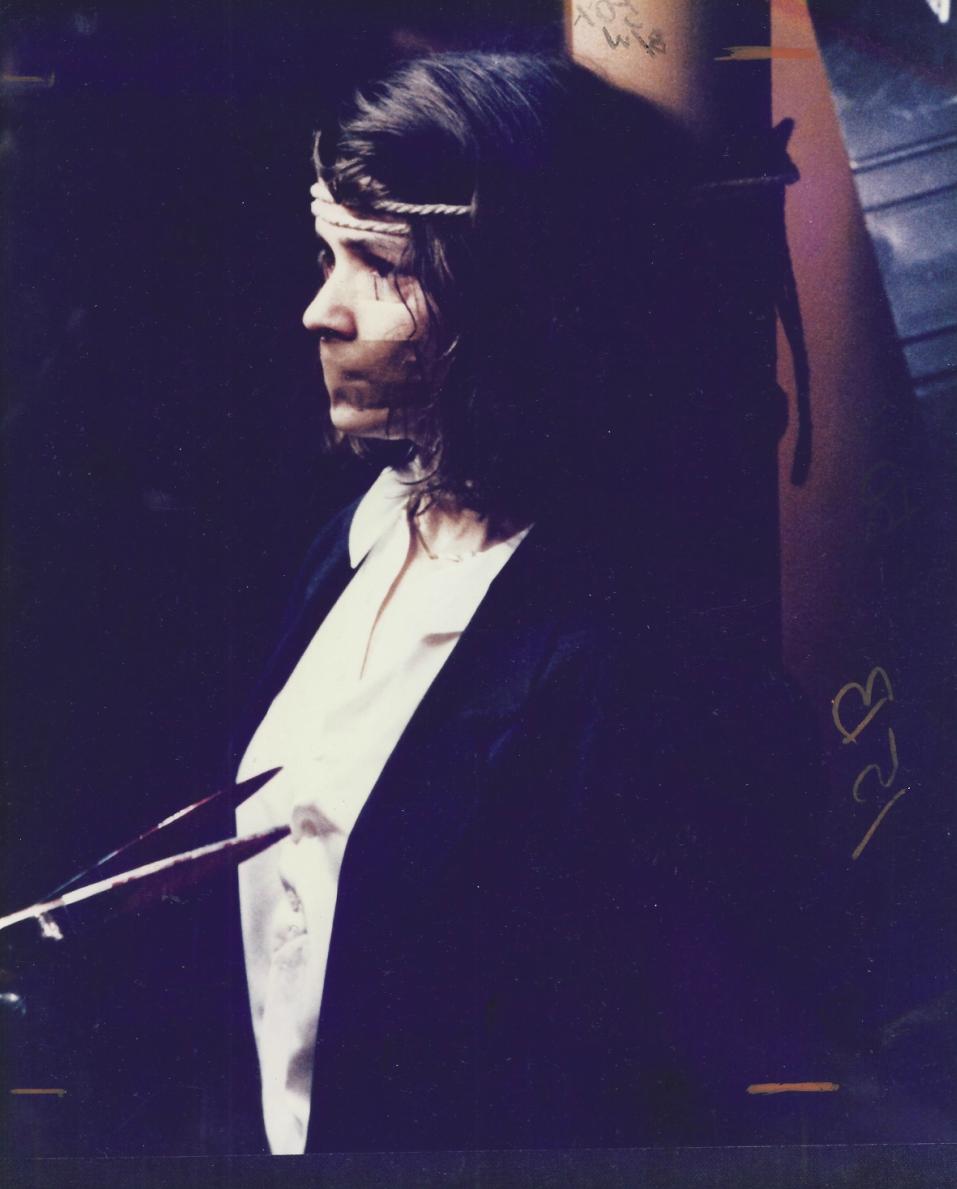 Argento’s lyrical closing shots resolve the brutal and fearful experience of Opera, reminiscent of other cinematic examinations of childhood trauma, abuse and regression. I see similarities with the dreamlike and beautiful climaxes of Peeping Tom, where Mark becomes the child again, whispering to his father from the black cinema screen of his nightmares; and the ending of Psycho, as Norman Bates finally transforms into the dead mother, and the fly wanders over his hand.

While contemporary horror and the numerous remakes of classic 70s and 80s horrors dwell on sadism, mutilation and death, there seems to be a wariness about probing into real mental illness for fear of being too disturbing. Yet re-watching the phantasmagorical Opera reminds us how dangerously detached these films are from the experience of real trauma and death. Challenging the conventions of the slasher genre, Opera is a vivid and unsettling experience, preying on our sense of vulnerability.

Brilliantly mixing gore, vivid colors, and twisting stories filled with black-gloved murderers and dashes of the supernatural, Dario Argento’s films have combined the best of horror and art house cinema. For over thirty years Argento has produced one classic shocker after another, such as Deep Red, Suspiria, Tenebre, and Opera. Now go behind the scenes and learn the dark secrets behind Argento’s movie alchemy, including his striking rock-influenced music, groundbreaking special effects, dizzying camera work, and haunting imagery, from his early mystery masterpieces to his latest thriller, Sleepless. Features interviews with John Carpenter, Alice Cooper, Keith Emerson, and actresses Jessica Harper and Piper Laurie. The DVD of the documentary is available at Amazon and other online retailers.

Dario ArgentoOperaTerror at the Opera