The notorious enfant terrible of film criticism, feeling no restraint as he butchers trends and practices in contemporary filmmaking that he feels devalue the noble and responsible profession. A dedicated interviewer, whose insightful and detailed conversations studiously examine some of the greatest filmmakers’ work. A passionate, sensitive, visionary film director, whose work is still taught and dissected at countless film schools around the globe. The man who lived and breathed cinema to the degree of becoming a personification of the wonderful art. François Truffaut, one of the founding pillars of the French New Wave, still radiates inspiration and love for the craft from the movies deemed seminal for European cinema, such as The 400 Blows, Jules and Jim, Shoot the Piano Player, The Wild Child, Day for Night, Two English Girls, The Woman Next Door and many more. His love for film started to develop as early as at the age of eight, upon seeing Abel Gance’s Paradis Perdu. His entry into filmmaking actually came from film criticism. A troubled youth, an only child in a loveless marriage who spent the first part of his life living with his grandmother and going to great distances to spend as little time as possible at his unhappy home, Truffaut enlisted in the army, only to be arrested as he tried to desert it. His friend Andre Bazin used his political connections to get him released and stationed him at his film magazine Cahiers du cinema.

Truffaut spent the following years honing his writing skills, receiving region-wide attention with his essay called ‘A Certain Trend of French Cinema,’ in which he assaulted the common filmmaking practices of people commonly regarded as the leading French filmmakers of the time. His ruthless reviews gained him the nickname of The Gravedigger of French Cinema, but after some time he decided to try making his own movies. His first feature film, The 400 Blows, got him a Best Director win at Cannes, as well as a Best Original Screenplay Oscar nomination, and Europe gained a new filmmaking prospect: a passionate intellectual who proved he could walk the walk. He wished to make thirty movies and then retire, dedicating his time to writing. Tragically, these plans were obstructed by a brain tumor, which sent Truffaut to the Montmartre Cemetery at the age of only 52. 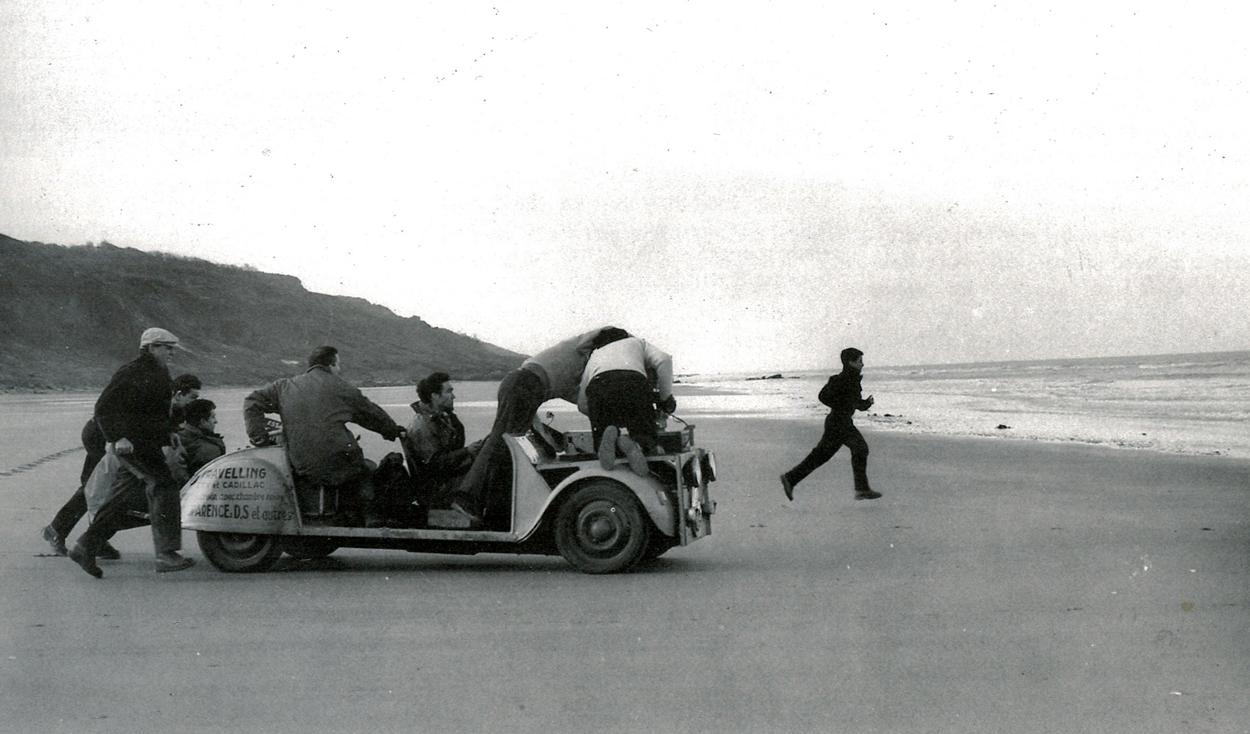 Today we’re presenting you with a rare interview with Truffaut published in the December, 1973 edition of the invaluable FILMMAKERS NEWSLETTER magazine. Filmmakers Newsletter was a well-respected magazine with articles abounding in technical information, as well as extensive analyses of both contemporary films and those who played significant roles in the historical development of the art and business. In an extensive conversation with journalist Suni Mallow, Truffaut discusses the making of his Day for Night, why he chose and waited so long to make a film about filmmaking, his general creative and practical process of making movies, his brilliant book made out of his conversations with Hitchcock (a must read!), how satisfied, as an experienced film critic, he truly is with his work, and more. There’s really no need for us to spoil any of the pleasures within the article—please take a peak and treat yourself to the thoughts and ideas of one of the greatest. You can download the PDF version: ‘A Portrait of François Truffaut.’ 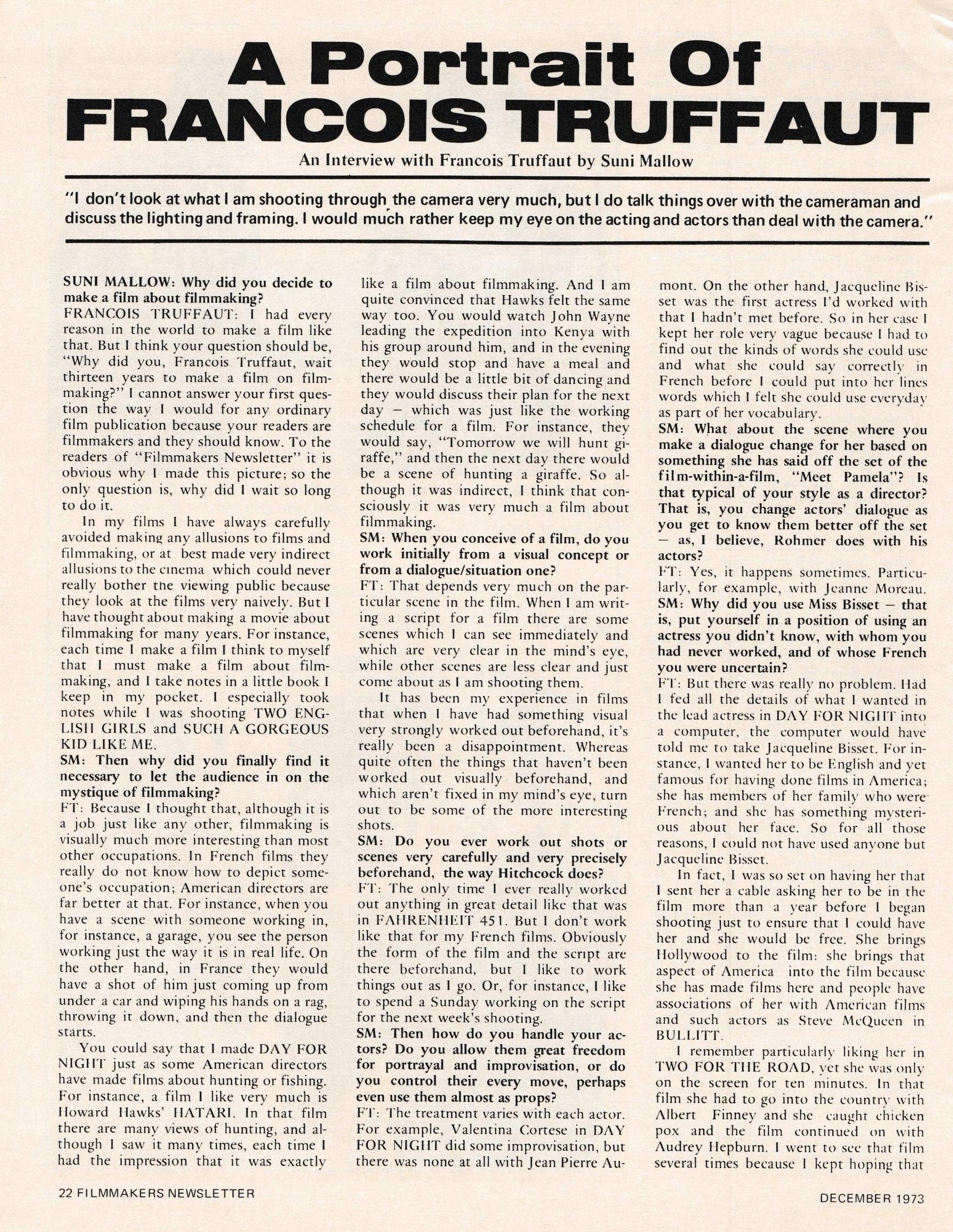 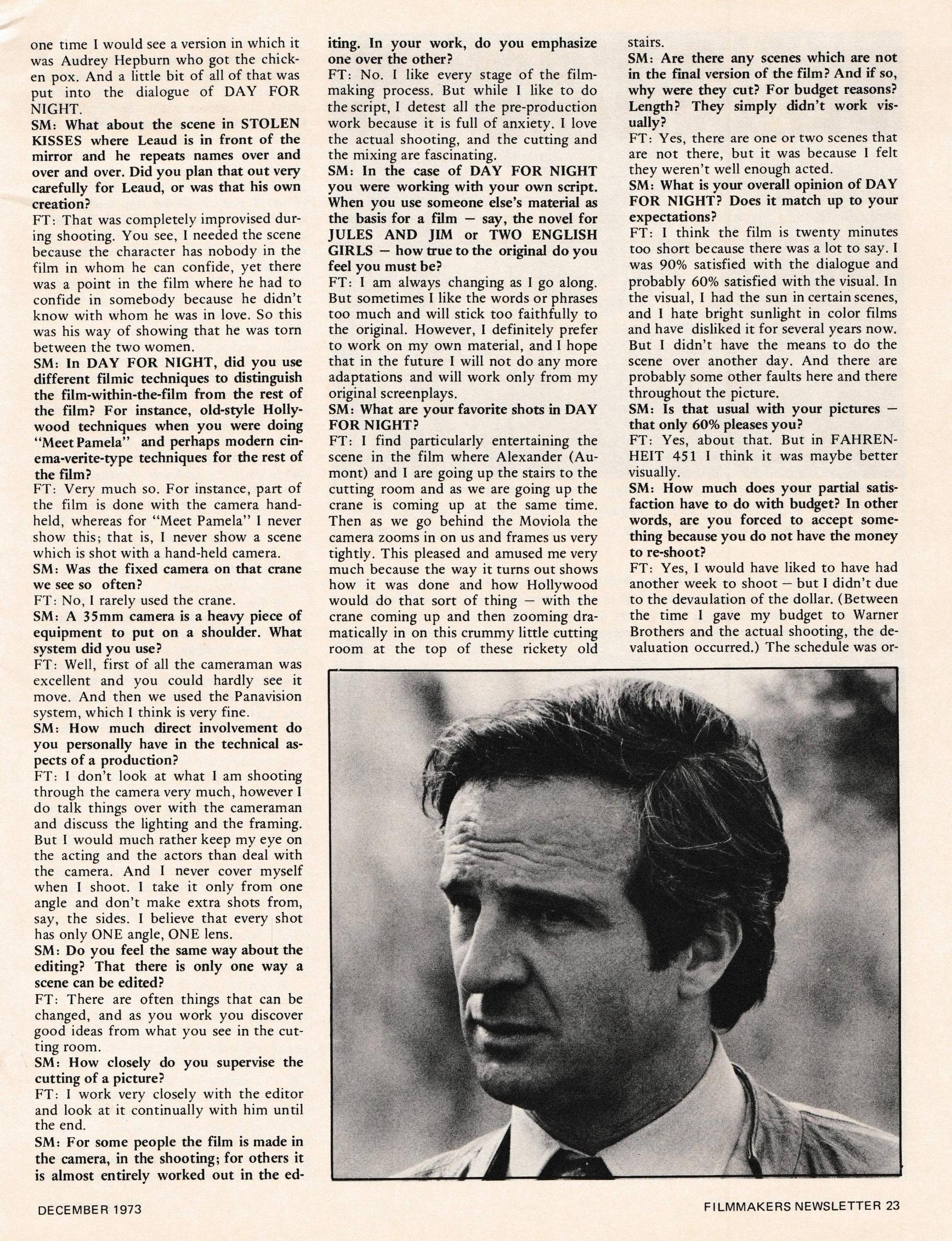 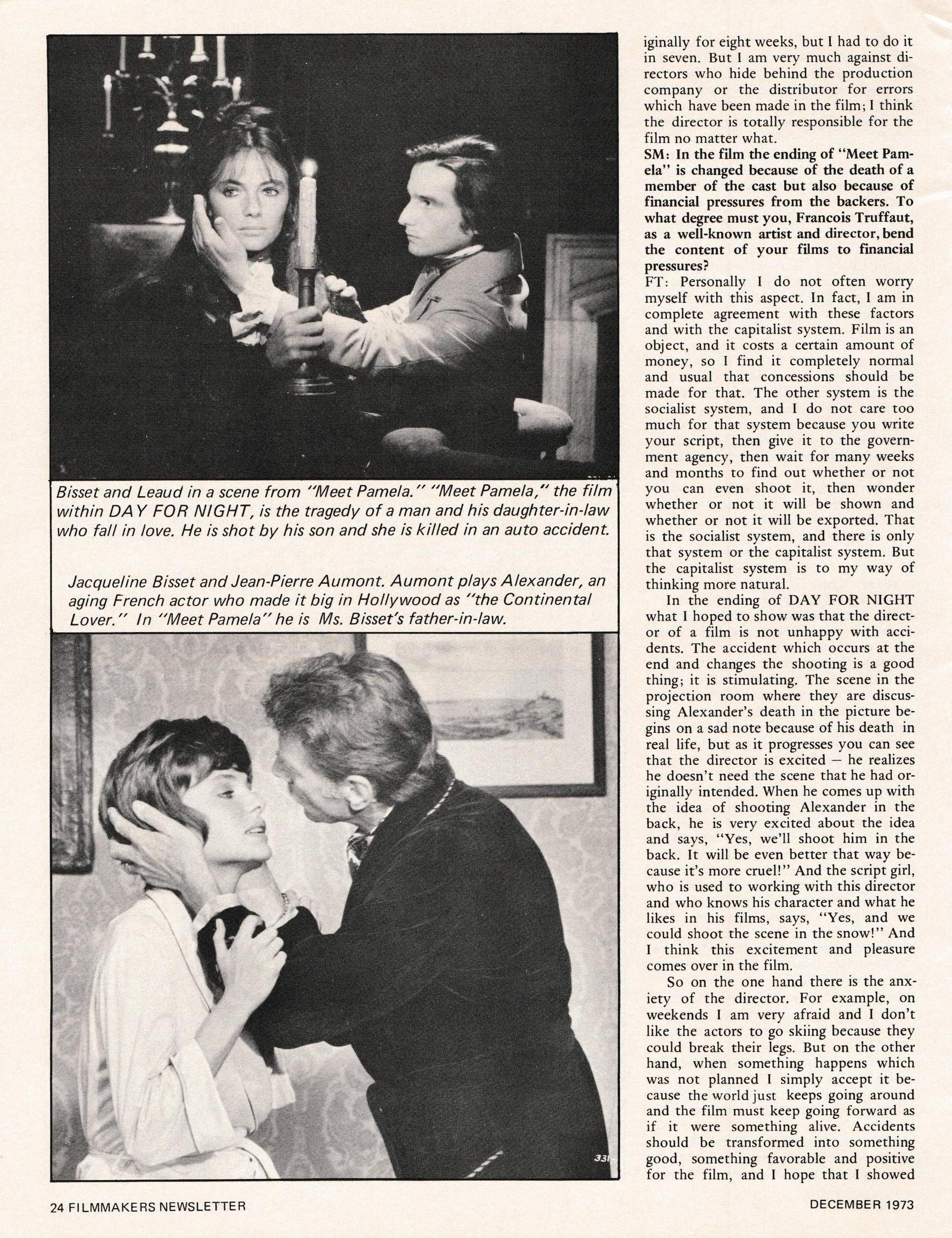 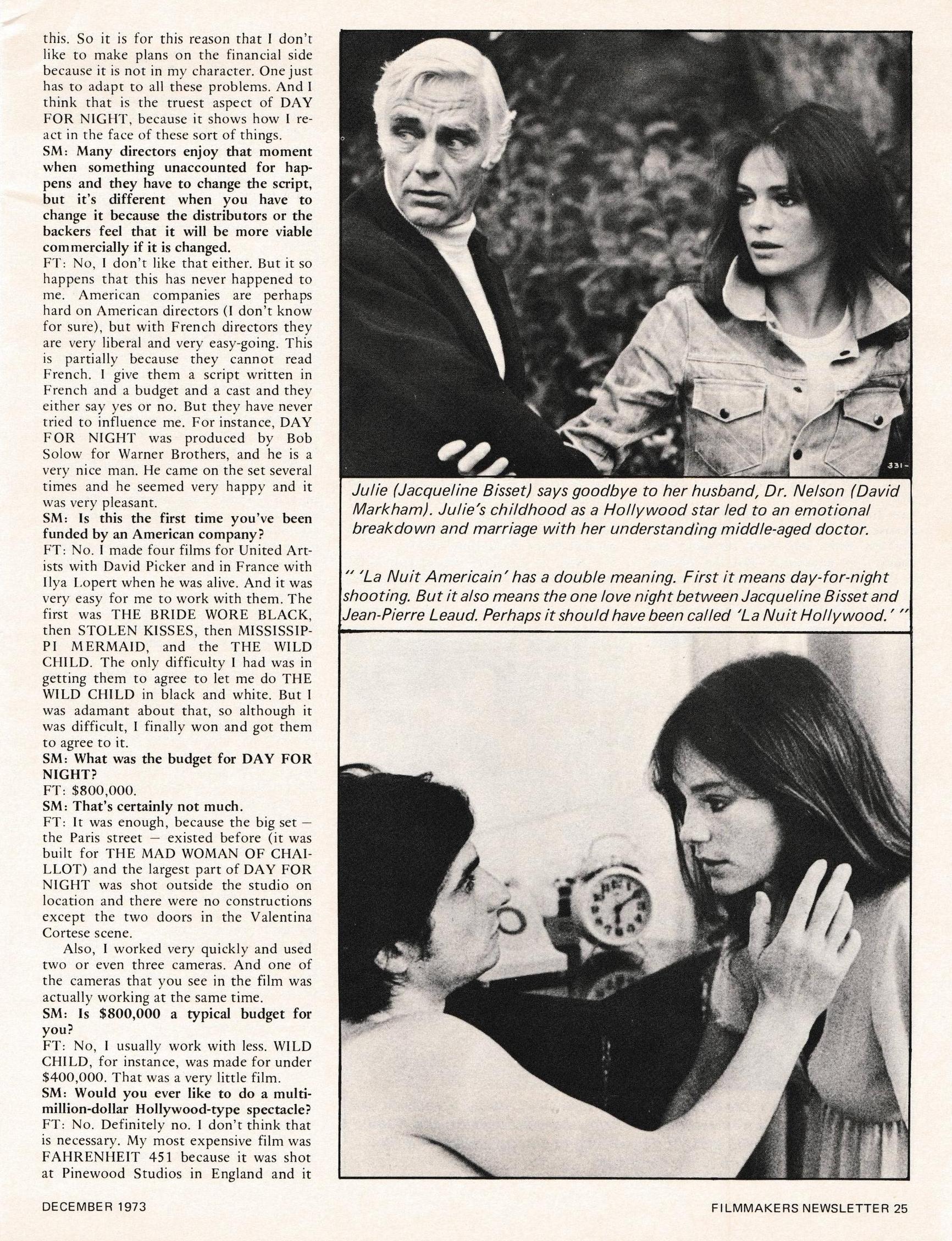 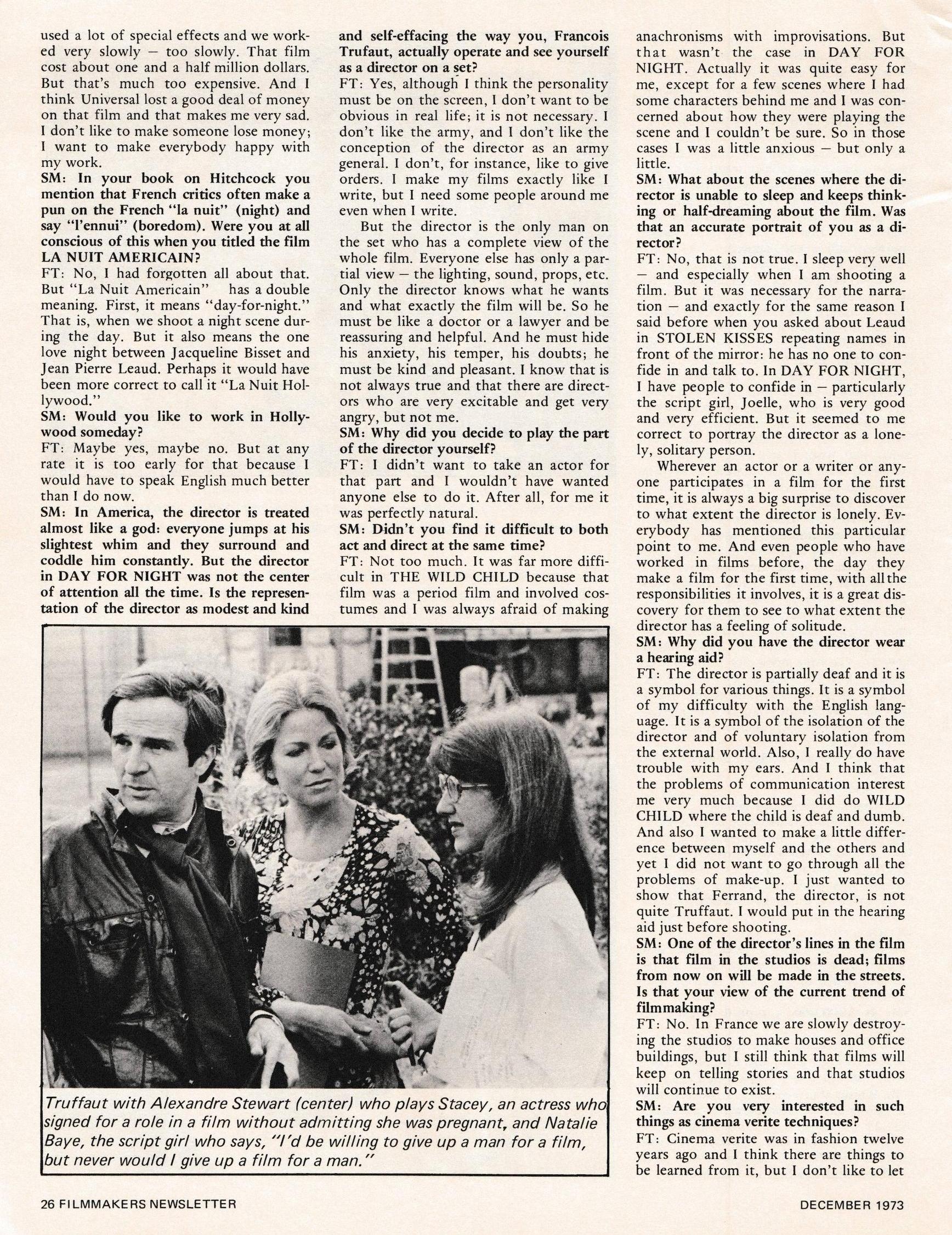 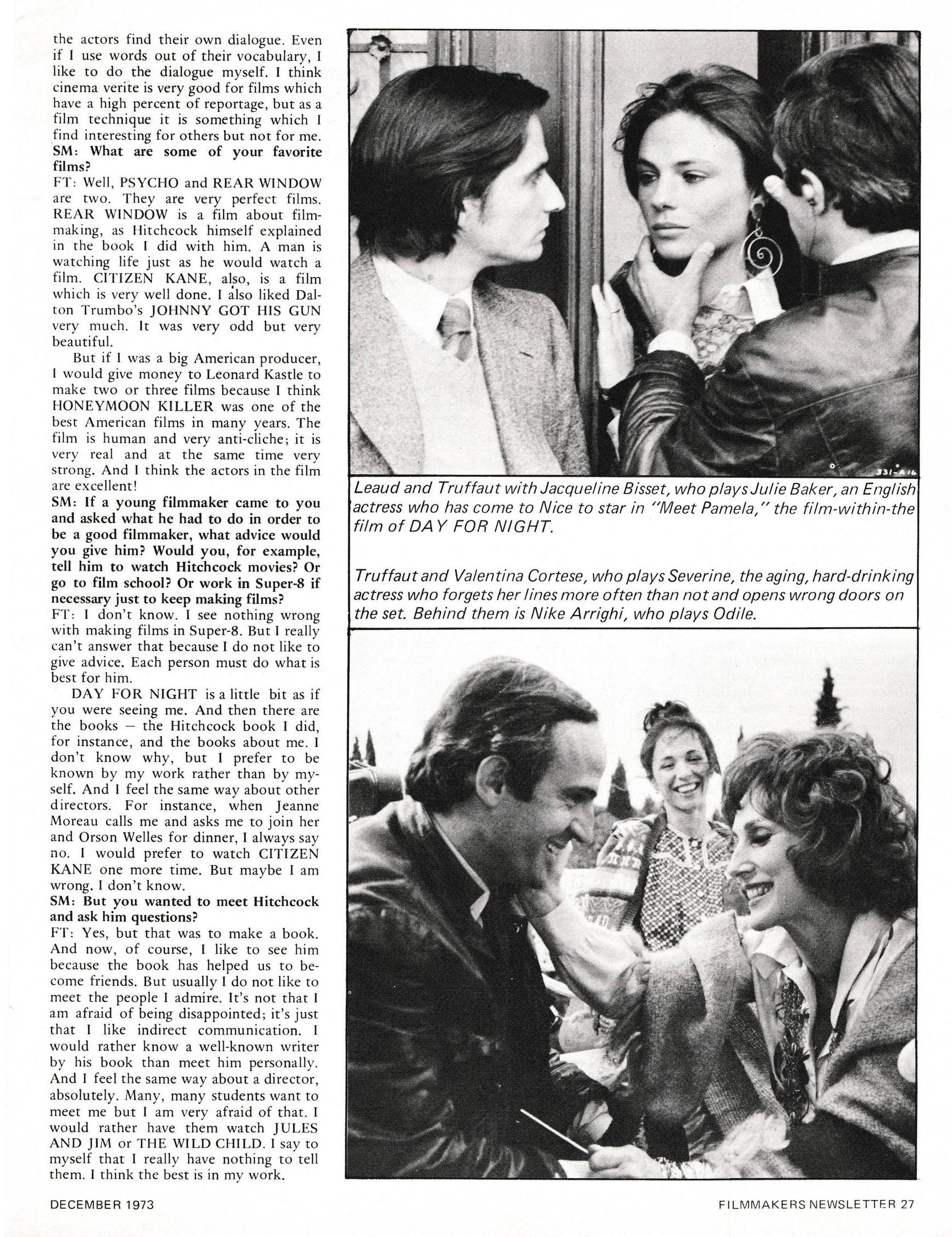 François Truffaut: The Man Who Loved Cinema is a 77 minute documentary that explores the life and works of the celebrated French filmmaker. François Truffaut is remembered as one of the major faces in the Nouvelle Vague (the French New Wave), however, his influence stretches beyond the movement. He was interested in creating strong narratives out of the material of his own life rather than the experimentation Jean-Luc Godard and his colleagues attempted with their films. Cinema and his own personal life, thus, were weaved one with the other and expressed by a comprehensive awareness of the cinematic story and the tools and techniques necessary to create an engaging narrative.

Even before his early death at the age of 52, Truffaut became an example to follow for independent filmmakers. His low-budget and autobiographical debut film, The 400 Blows, marked the beginning of the French New Wave and led the way for innovation in filmmaking. Inspired by the Italian Neo-Realists, Truffaut and the French New Wave filmmakers took on the issues of production value and budget by seeking alternatives to production methods… they used all that was available to them in order to express their cinematic and artistic visions. What was important was the material and the minds handling it. The in-depth exploration presented by François Truffaut: The Man Who Loved Cinema makes the documentary a great watch. Learn from one of the leading figures who changed the face of film history forever! —A BitterSweet Life