Upon making Jaws, the first true blockbuster and a shocking money-maker, Steven Spielberg was under enormous pressure to produce a decent, equally bankable follow-up. Faced with such a challenge, Spielberg opted for a science fiction film about extra-terrestrials visiting Earth. Now, if this was happening today, one might note it seems like a logical move to make, even expected, with nothing especially daring about it. But in the seventies, it took a lot of guts to tackle such a story and devote yourself to such a demanding cinematic adventure that could have potentially ruined Spielberg’s career and make sure his name is featured in film history books right next to the resented one-hit wonder etiquette. However, precisely because of the huge success of his maritime horror classic, Spielberg had practically unlimited creative control and enjoyed unreserved confidence from the financially ailing Columbia Pictures. Allegedly hung up on this story since the beginning of the seventies, Spielberg decided to gamble. Standing face to face with the danger of obliterating the momentum he created with his previous film, he made Close Encounters of the Third Kind and cemented his place among the leading Hollywood filmmakers. Both his and Columbia’s gambling paid off generously, as the box office and the initially highly sceptic critics rewarded his bravery and vision without holding back.

Spielberg allegedly wanted to make a documentary or a low-budget feature film concentrated on the story of people who believed in UFOs. The name of this project was Watch the Skies. He hired Paul Schrader to write the script at the end of 1973, with the hope of starting principal photography in late 1974, but Spielberg’s work on Jaws pushed this project back. Schrader turned in his screenplay entitled Kingdom Come, but Spielberg was utterly disappointed, as Schrader’s and his vision shared hardly any common ground, calling it later “one of the most embarrassing screenplays ever professionaly turned in to a major film studio or director.” John Hill was hired for a rewrite, followed by David Giler with the same task, and Hal Barwood and Matthew Robbins also pitched in. From all of this creative mess, Spielberg wrote the screenplay he wanted, but it turned out Close Encounters of the Third Kind, as the project was now called, would cost seven times as much as the Watch the Skies, the original idea it all started from.

Richard Dreyfuss, with whom Spielberg worked on Jaws, campaigned to get the role of a bewildered blue collar worker obsessed with what he had seen in the skies, and the other crucial role went to the legendary filmmaker François Truffaut after Spielberg mustered the courage to ask him. “I’m not an actor, I can only play myself,” he replied to the young filmmaker whose work he admired, and Spielberg reassured him this was exactly what was needed. From today’s point of view, it was an all-star crew. Dreyfuss and Truffaut aside, helped by a good performance from Melinda Dillon, with the young lion in the director’s chair, Close Encounters of the Third Kind gathered such talents as the great Douglass Trumbull, the 2001: A Space Oddysey veteran, who served as the visual effects supervisor, John Williams, the celebrated composer who just came off working on Star Wars, the iconic Vilmos Zsigmond behind the camera, and the skilled editor Michael Kahn, with whom Spielberg would continue working for the next thirty years.

The strength of Close Encounters of the Third Kind lies not only in the mentioned experts’ skill and experience, but in Spielberg’s vision, his sensitivity and indisputable storytelling mastery. He made a film seemingly about extra-terrestrials, but in the focus of his lenses is nothing other than humanity, our aspirations and desires, hopes and fears. It’s a wonderful movie about the gentle nature, sparkling curiosity and eternal longing for progress of our species, and as such, stands far apart from other science fiction films of the time, which, in the dominant paranoia of the Cold War, insisted on the dangers and threats of cooperation and comradery with outsiders.

A monumentally important screenplay. Screenwriter must-read: Steven Spielberg’s screenplay for Close Encounters of the Third Kind [PDF1, PDF2]. (NOTE: For educational and research purposes only). The DVD/Blu-ray of the film is available at Amazon and other online retailers. Absolutely our highest recommendation.

The director of Close Encounters of the Third Kind talks moviemaking, UFOs and the night sky.

Marshaling the crowds proved to be fun next to the task of directing another director, François Truffaut, who plays the part of Lacombe, a French scientist and UFO expert. It took four full weeks for Spielberg to understand that not only was Truffaut Truffaut, but also a performer, and they could talk, shoot the breeze and act like folks. Dreyfuss claimed he never got past the ga-ga stage with Truffaut. You’d think, because Truffaut has acted in two of his own movies, that he likes to act. “He does,” Spielberg said slowly. “He likes to be himself. He doesn’t like to act… I don’t think he ever played a character in any of his films, but he’s a good enthusiast of his own personality. Which is all I wanted. I cast him because of his interviews, and how I saw him in Day for Night, and how I saw him in Wild Child.”

Just imagine: another director standing around noticing Truffaut Scenes on your movie set. “There were several things where he made suggestions that I used. Little touches here and there. Truffautesque touches. Truffaut asked me to show him off-camera how I wanted him to behave on. I stood in front of the camera and Truffaut watched me, and as I acted out his part, he imitated my every facial move. When I saw the dailies next day, I realized what a bad actor I was. I just wouldn’t do that anymore.”

Was he experimenting with you?

“I think he was, but he told me that he does that occasionally to some of his actors when he makes his movies. If he can’t explain the emotion in so many words, he plays it out and the people can see what he’s thinking.” —The Sky is Full of Questions, Rolling Stone, January 26, 1978

Spielberg discusses such things as the ideas behind the film, his interest in UFOs back in the 70s, the casting and the production itself. Particularly interesting is Spielberg’s comment that the last 30 minutes of Close Encounters was the most difficult editing challenge he’s ever faced.

Steven Spielberg is interviewed in 1977 by Claire Olsen for the Canadian series ‘Show Biz,’ just as Close Encounters of the Third Kind was about to be released.

Steven Spielberg on location in India with François Truffaut.

Spielberg came to AFI in 1978 for a seminar with AFI Fellows. In this clip he talks about working with François Truffaut.

A behind-the-scenes documentary about the making of Close Encounters of the Third Kind. Includes interviews with director Steven Spielberg, star Richard Dreyfuss and other members of the cast and crew, who tell their stories of what it was like to be involved in the film, as well as the enormous effort that went into making Spielberg’s vision a reality.

As part of the DGA’s 75th Anniversary, DGA Lifetime Achievement Award recipient and three-time DGA Award winner, Steven Spielberg, was celebrated on June 11, 2011. Featuring a lively and engaging panel discussion with fellow visionary directors J.J. Abrams and James Cameron, and moderated by 75th Anniversary Committee Chair Michael Apted, this “Game-Changer” event drew a maximum capacity crowd at the DGA Theater in Los Angeles and provided a deeply intimate, highly engaging reflection on one of the most influential and beloved filmmakers of all time. —A Tribute to Director Steven Spielberg

A Japanese film crew visits Steven Spielberg in the early 1980’s. This amazing documentary takes us into the life of Spielberg in his mid 30’s as he gives us a tour of his office and his house. 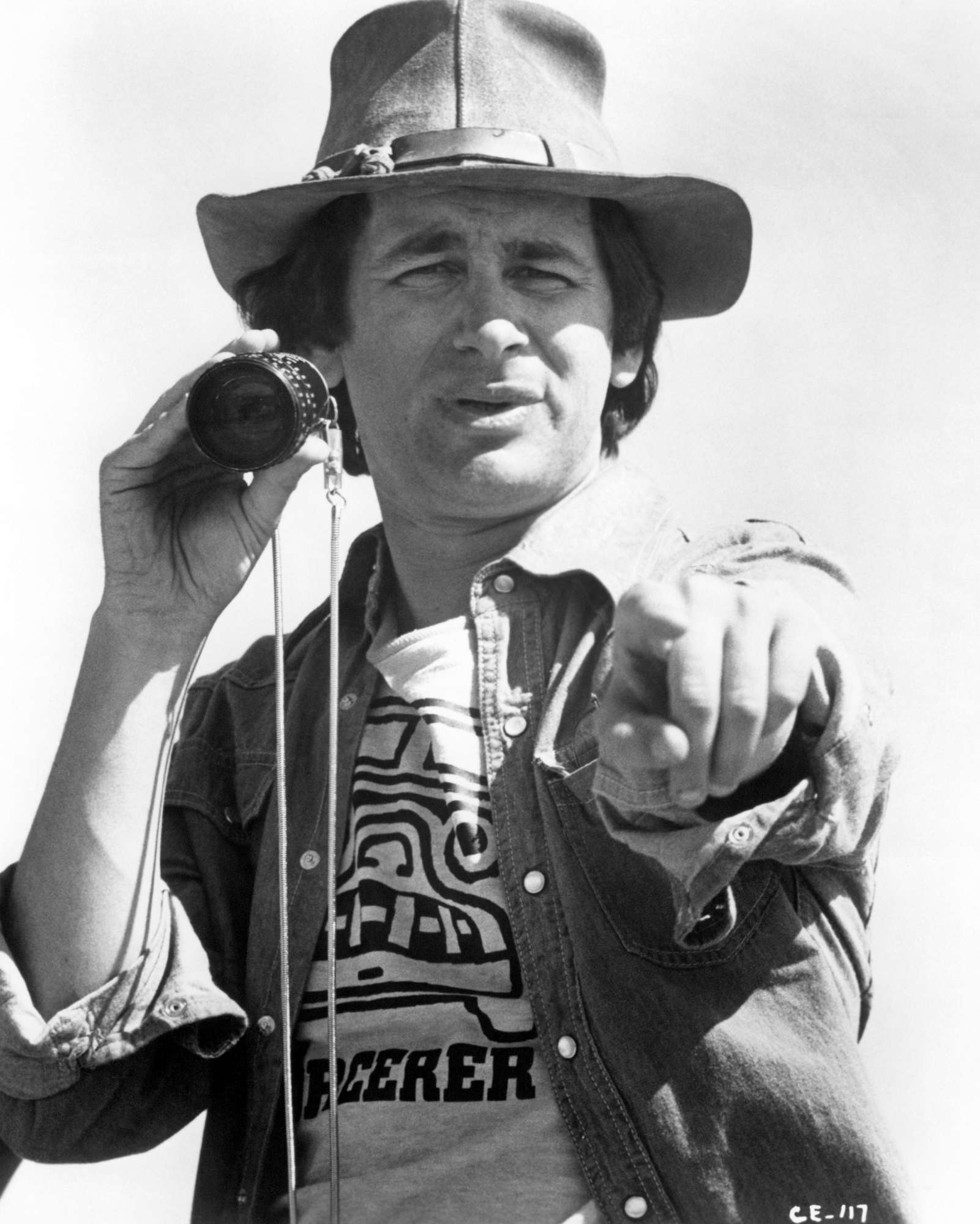 Why every film fan should know and remember Vilmos Zsigmond, one of cinema’s greatest artists… This is a found-footage documentary exploring the work of cinematographer Vilmos Zsigmond who died on the 1st January this year. Courtesy of Phil Whitehead.

Here are several photos taken behind-the-scenes during production of Steven Spielberg’s Close Encounters of the Third Kind. Photographed by Marcia Reed, Jim Coe, Peter Sorel & Pete Turner © Columbia Pictures. Intended for editorial use only. All material for educational and noncommercial purposes only.