The great folks at British Film Institute unearthed a memo to Roger Caras from Stanley Kubrick. On 22 September 1965, during early production on 2001: A Space Odyssey, Kubrick fired off this short memo to his collaborator Caras, then vice-president of the director’s production company Hawk Films. Kubrick was himself fascinated with advancing computer technology and consulted with IBM on details for HAL, the film’s sentient mainframe, which malfunctions during a US mission to Jupiter.

A later memo from Kubrick to Caras on 31 August 1966 expressed concern that IBM were fully aware that his film’s super-computer wasn’t all it was cracked up to be.

In August of 1966, 2 years prior to the release of 2001: A Space Odyssey, Stanley Kubrick wrote to the vice president of his production company and asked whether IBM—a company with whom Kubrick consulted during production, and whose logo briefly appears in the film—were aware of HAL’s murderous actions in the story. His letter, and Roger Caras’s reply, can be seen below. It’s worth noting that both Stanley Kubrick and Arthur C. Clarke have since denied that HAL represented IBM, and have claimed that the “one-letter shift” between the names “HAL” and “IBM” is purely coincidental. —Letters of Note 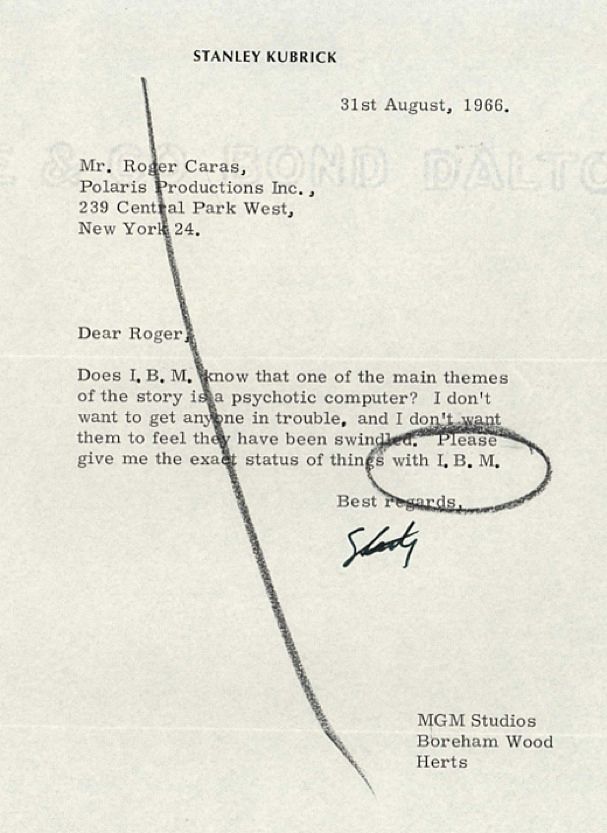 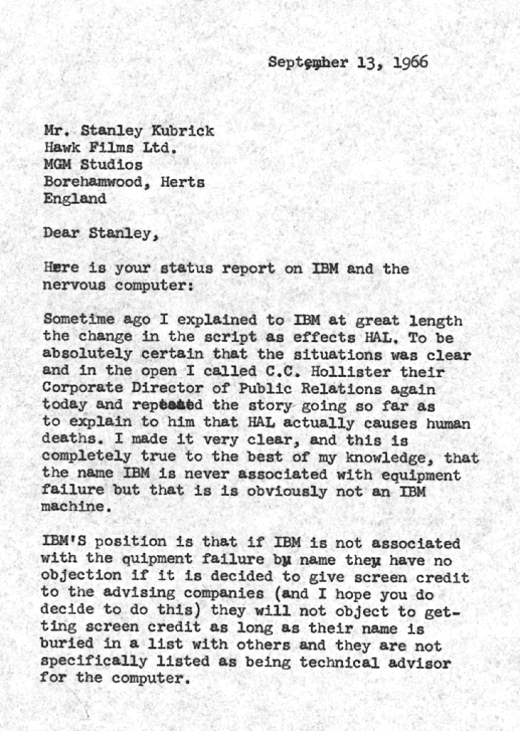 The letter from Stanley Kubrick that started 2001: A Space Odyssey, courtesy of British Film Institute.

By late March 1964, almost exactly two months after the release of his end-of-the-world satire Dr. Strangelove, director Stanley Kubrick was already turning his attentions to future projects. Seeking collaboration on what he termed “the proverbial ‘really good’ science-fiction movie,” he penned this letter to sci-fi writer Arthur C. Clarke. With novels such as Childhood’s End (1953) and The City and the Stars (1956), Clarke had established a reputation as one of the most intelligent voices in sci-fi literature, and – as the director states in his letter – Kubrick had been “a great admirer” for some time. 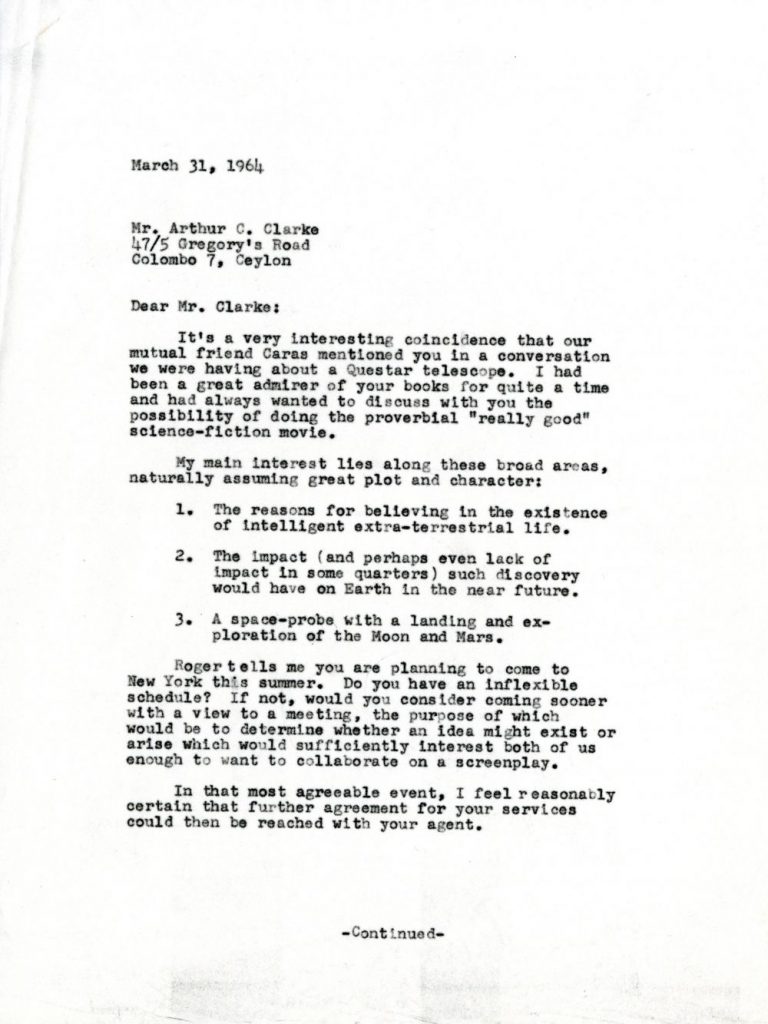 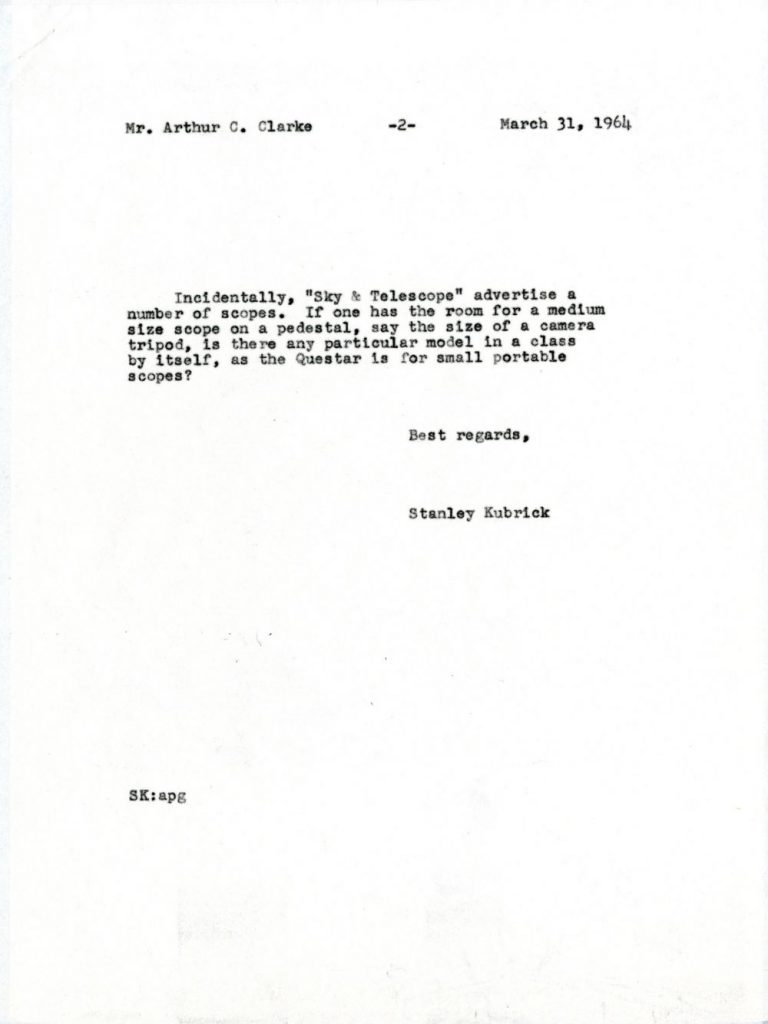 Dated 8 April, Clarke’s response was immediately enthusiastic, expressing a mutual admiration. “For my part”, Clarke wrote, “I am absolutely dying to see Dr. Strangelove; Lolita is one of the few films I have seen twice—the first time to enjoy it, the second time to see how it was done.” This exchange of letters between Clarke’s home in Ceylon and Kubrick’s offices in New York led to a meeting just a few weeks later, on 22 April at the Plaza Hotel in New York, where the two talked for hours about the genre that had brought them together. The wheels were in motion for their alliance on what would become perhaps the finest science fiction film in the history of cinema—2001: A Space Odyssey, which was released four years later, in the April of 1968. —British Film Institute 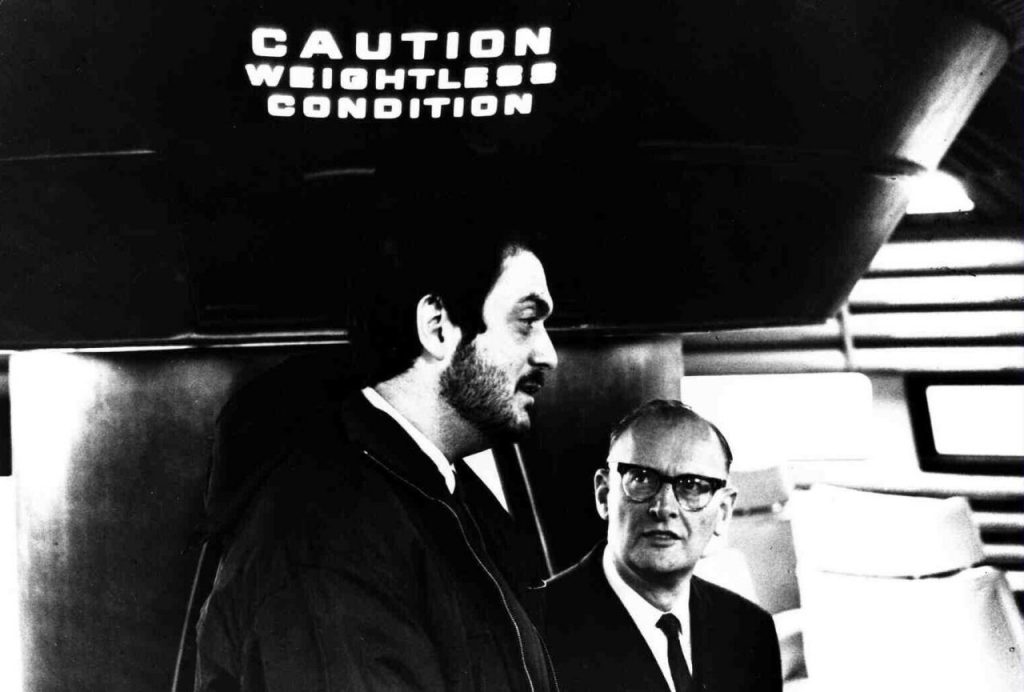 In the summer of 1968, science-fiction author Arthur C. Clarke sat down with Patricia Marx to discuss the upcoming release of 2001: A Space Odyssey. Four years earlier, hot on the heels of Dr. Strangelove, Stanley Kubrick approached Clarke with an idea for a film based in outer space. Borrowing from Clarke’s early short story, The Sentinel, the two collaborated on the screenplay for a film they hoped would “convey the beauty and strangeness of the universe—to make people realize […] man’s place in the cosmic hierarchy.”

Recorded just a year shy of the iconic moon-landing, this interview captures a singular moment of prescience and optimism for a world entering into the future. Clarke’s more spirited predictions for the coming century include the development of space industry and tourism replete with colonies on the moon and Mars, the establishment of contact with extraterrestrial entities, and the potential for human immortality. While we have yet to conquer the New Frontier in many of the ways Clarke anticipated, his enthusiasm for the future throughout this interview is infectious. At a time when information and new technology constantly abound, this unique interview captures a refreshing moment of novelty. —Patricia Marx’s 1968 Interview with Arthur C. Clarke 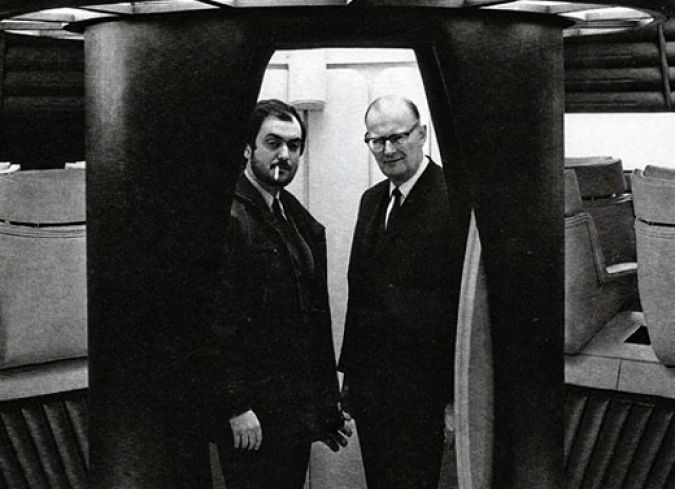 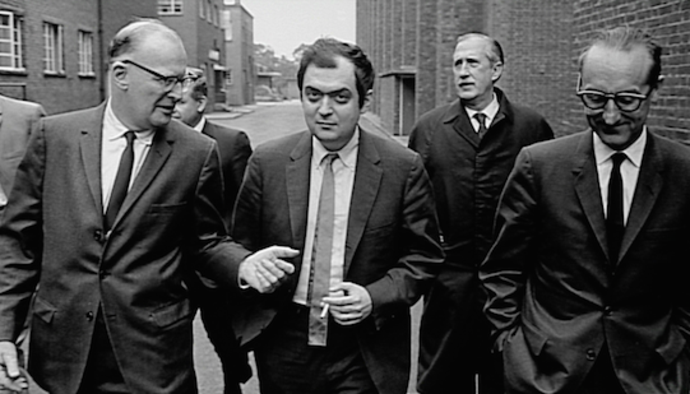 Here’s a rarity: Stanley Kubrick & Arthur C. Clarke’s scanned screenplay for 2001: A Space Odyssey [pdf]. (NOTE: For educational purposes only). The DVD/Blu-ray of the film is available at Amazon and other online retailers. A fascinating snapshot of a moment in history when the world was caught off guard by a motion picture. Absolutely our highest recommendation.