One of the biggest compliments that John Sturges’ Bad Day at Black Rock received was when Paul Thomas Anderson commented on its educational value in terms of sharpening one’s filmmaking craft. “Work your way up, save your money and forget film school. Go buy Bad Day at Black Rock and listen to John Sturges’ commentary and you’ll learn more about filmmaking than 4 years of going to school,” stated one of the most respected contemporary film directors, adding that “film school is a complete con, because the information is there if you want it.” P. T. Anderson is far from being the only one to realize and understand the significance of Sturges’ contemporary western and the mastery put into its creation. When it came out in 1955, it was immediately hailed by critics and audiences alike, finding its place among the material studied in film schools around the globe due both to its technical qualities and its significance in terms of cultural and historical impact. Bad Day at Black Rock is a sharply, simplistically written story of a stranger who arrives at a desolate little American town in the middle of a desert, only to find nothing but general suspicion and hostility towards him. Sturges’ film is minimalist, showcasing beautiful Panavision photography, featuring splendid acting from some of Hollywood’s greatest, and offering unbelievable suspense and tension without even visibly trying. Sparse action scenes embellished with hardly any blood are something we rarely find these days, but relying on the strength of the story, inspiration of the cast and his clear talent for building the right atmosphere, Sturges makes a subversive, refreshing and tightly-knit movie that stands out as one of the most distinctive pieces of filmmaking that the fifties have seen. The cultural importance of the film lies in the fact that it audaciously tackles a subject far from common in those days: the nationalism and racism of America, the harsh and unjust treatment of Japanese Americans in the days following the Pearl Harbor assault, the importance of both individual and collective moral responsibilities and standards, the narrow-mindedness, prejudice and paranoia developed among Americans in the first half of the 20th century, creating a hostile stance towards foreigners of Asian descent culminating in the infamous prison camps in the forties. A lot of people see the film also as a harsh criticism of McCarthyism, in a similar manner to that of High Noon.

The film was adapted by Don McGuire and Millard Kaufman from a short story by Howard Breslin entitled ‘Bad Day at Hondo.’ When the screenplay was shown to MGM head Dore Schary, who enjoyed the reputation of a man fond of making films with strong social or political messages, he found it an ideal project for Spencer Tracy, one of the most famous actors of the time on contract with the studio. Tracy, however, was reluctant to accept the role, considering the short story and the script inferior to an actor of his reputation. But Schary managed to convince him to do it with a bit of trickery: he had the plot changed, turning the protagonist into a one-armed man (he believed no actors would refuse to play a handicapped character), and even lied to Tracy that he had the script sent to Alan Ladd, who said he’d gladly shoot it. The truth was, Ladd’s agent passed on the script. But the mind game worked, and Tracy, however reluctantly, committed to making the film. The rest of the almost all-male cast was comprised of Robert Ryan, Lee Marvin, Ernest Borgnine, Walter Brennan, Dean Jagger and Anne Francis, while the movie was shot by the renowned cinematographer William C. Mellor. Sturges first envisioned a film with no musical score, but after some negative comments after a test screening, German-American pianist and composer André Previn was hired to score the film.

Bad Day at Black Rock remains the film John Sturges is most proud of. “Bad Day wanted to be made. Before the camera ever rolled or construction even started on the little town, everything fell into place, it was all right on. Meaningful story, flawless script and cast, everything… And as a bonus we had full wide-screen photography, one of the very first. The background of stark mountains, huge Streamliner train, barren deserts, all became players in the story, integrated into the mystery and violence of its theme. I don’t see how anyone could have blown directing this picture,” explained Sturges later. Courageous in the choice of its theme and exhibiting neat storytelling, masterful acting and flawless directing by one of Hollywood’s greatest, Bad Day at Black Rock is one of our favorite films of all time.

A monumentally important screenplay. Dear every screenwriter/filmmaker, read Millard Kaufman’s screenplay for Bad Day at Black Rock [PDF]. (NOTE: For educational and research purposes only). The DVD of the film is available at Amazon and other online retailers. Absolutely our highest recommendation.

“I think of Bad Day at Black Rock as a Western as well, a modern-era Western, as it takes place in the months just after the end of WWII. Whenever Bad Day at Black Rock came up, Sturges said, ‘It doesn’t get any better than that. The screenplay came to me and we didn’t have to change anything. It was perfect.’ But what Sturges did was, they got rid of a lot of secondary characters in the town. There were other people with lines, but he pared them away, and that was, again, part of Sturges’s genius. He talked about making it into a Greek tragedy by just having X number of players, and only those characters who are intrinsically involved in the moving of the plot would survive those edits.” —An interview with Biographer Glenn Lovell on John Sturges

Millard Kaufman, who passed away on March 14, 2009, at the age of 92, accomplished something maybe even more significant than his two Academy Awards nominations. And that is the fact that he managed to sustain a writing career for seven decades. Documentary filmmaker Edmond Stevens presents a segement of his feature length documentary, Spec, about the culture and commerce of spec screenplay writing. Millard was generous enough to to contribute an interview for this movie and here are a few excerpts and his take on ‘a life well-written.’

Ernest Borgnine talks with interviewer Alan K. Rode about Bad Day at Black Rock, Spencer Tracy, Marty, and Lee Marvin at the screening of Pay or Die in Palm Springs in May, 2010. 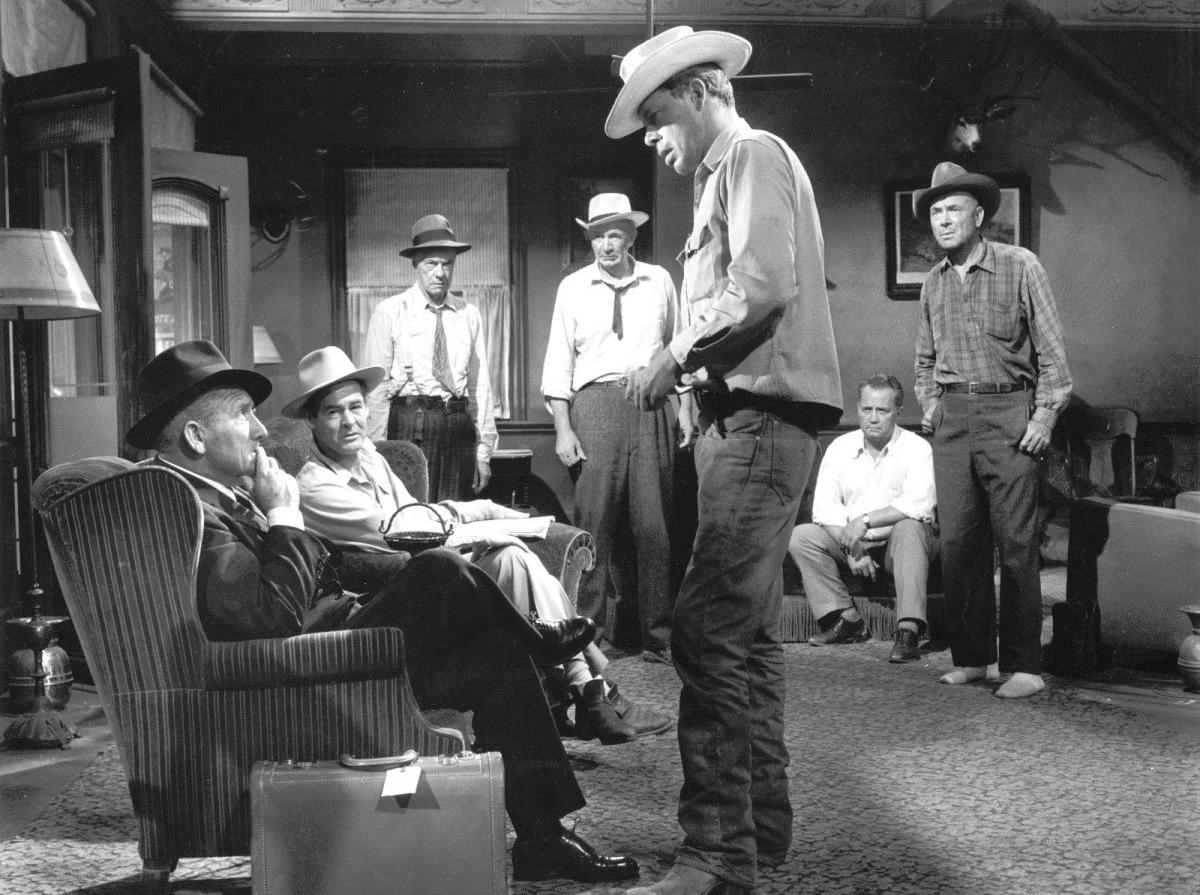 JOHN STURGES SCHOOLS YOU ON FILMMAKING

Listen to director John Sturges’ “better than film school” commentary on the Criterion Laserdisc release. You can also download .mp3 file for your listening and learning pleasure.

“A lot of people have asked me about camera technique—angles to use, why you use them, camera style, camera movement. One answer is that it depends on the kind of film you’re making. If you’re telling a story and it’s told in an apartment house in New York—really not much point in trying to see how fancy you can get the film angles. If you’re doing a picture such as this one, Bad Day at Black Rock, there’s a wide opportunity to use what I’ll call ‘effective angles,’ because everything you look at has interest. But now you get into the purpose of the film. The perfect camera technique is one that the audience doesn’t even know is existing.”

FILM IS ABOUT REACTION

“Film is reactive. What counts is what your players react to. So, if you go past your principal actors at what’s happening, then you cut around, reverse back onto that actor—automatically you’re in a close shot, which is what you wanna be, and automatically you’re cutting off what happened to see how it affected him. That’s the name of the game in films. Hitchcock said it all. He said, ‘Cutting means the ability to make an audience feel what you want them to feel by the reaction of somebody to something.’”

“Part, of course, of good photography is what you’re photographing—spectacular locations, spectacular faces, spectacular characters, a streamline in a desert is pretty spectacular. So, you start with stuff that’s worth seeing—Jack Ford, I guess the man who everyone agrees made the best western, he shot it backlight. Backlight means the mountains are dark and heavy and ominous—that the faces of the characters are dark—he used big big things behind people. He shot up at them to make them look menacing by taking on the character of the mountains behind them.”

“One: He was a man whose life was saved by a Japanese boy in Italy. The boy died and he was given a metal for his heroism. He’s looking for the father of that boy to give him the metal in an expression of thanks. Two: He’s lost the use of his arm. He feels mutilated, unneeded, defeated, and leading a pointless existence. Put those two elements in this and you have a story. And it moves. It’s alive, and you identify. It goes somewhere.”

“The film itself is an hour and 21 minutes, when I got done splicing up the bits I marked as informative—I had about 50 minutes of material from Sturges. After the split, I left out about 20 minutes that was good, but mostly outdated. So what you’ve got is essentially 30 minutes of some really great fucking filmmaking discussion. I am thankful that this great man left us with some insight before he left this earth.” —filmschoolthrucommentaries

Here are several photos taken behind-the-scenes during production of John Sturges’ Bad Day at Black Rock © Metro-Goldwyn-Mayer (MGM). Intended for editorial use only. All material for educational and noncommercial purposes only.