Sometimes considered a second-rate product in a highly admirable series of excellent movies in Alfred Hitchcock’s dossier, the 1941 psychological thriller named Suspicion is, au contraire, a masterful exposition of Hitchcock’s skills. If we take all the circumstances of its production into consideration, especially the information on the studio’s meddling in the process and its stubborn and artistically misguided insistence on what proved to be a clumsily pasted happy ending to a very dark tale, what Hitchcock managed to make is a rather exceptional thriller. Since the story features a woman secretly becoming more aware of her husband’s murderous intentions, the central problem was the casting of Cary Grant. RKO allegedly fought very hard not to allow Hitchcock to end the film the way he wanted—with the scheming playboy’s murdering of his loving, rich spouse, in fear of tarnishing Grant’s reputation and image in the minds of moviegoers. Even though we personally liked the ending, because it imposed an important cautionary message on the harm that lack of communication and unbased suspicions can inflict on people’s lives, it’s perfectly understandable why it seemed unnatural to end the picture on such a positive, optimistic note, after an hour and a half of psychological turmoil caused by masterful suspense played out from the hands of the genre’s unique master.

The film is based on Anthony Berkeley Cox’s novel ‘Before the Fact,’ but Suspicion was hardly shy of straying both narratively and thematically from its source. The screenplay was written by Samson Raphaelson, Joan Harrison and Hitchcock’s wife Alma Reville, after a former version of the script, penned by Nathanael West and Boris Ingster, was discarded as soon as Hitchcock came on board. The delightful score by Franz Waxman, as well as Harry Stradling Jr.’s top grade photography, aided Hitchcock greatly in achieving the palpable tension and the atmosphere of distrust and fear verging on paranoia. Cary Grant and Joan Fontaine infuse Suspicion with credibility and emotion, with the latter giving the only Academy Award-winning performance in a Hitchcock film. Suspicion was a success, as it generously helped establish the filmmaker’s status of a bankable director in Hollywood, but box office reports hardly matter in the long run—Suspicion is first and foremost an admirable film that showed a true artist can create great things even under the crippling harness of a profit-driven studio.

A monumentally important screenplay. Dear every screenwriter/filmmaker, read Samson Raphaelson, Joan Harrison & Alma Reville’s screenplay for Suspicion [PDF]. (NOTE: For educational and research purposes only). The DVD of the film is available at Amazon and other online retailers. Absolutely our highest recommendation.

Another brilliant interview with master of suspense. Hitchcock was interviewed at the National Film Theatre on the evening of 3rd October 1969 by fellow director Bryan Forbes. The video below is an edited version of the hour-long BBC broadcast of the interview, which was first shown on BBC One in 1969 and then repeated in 1970.

In some of your early films, such as Suspicion, the star could dictate the way a film developed. Do you find you have more freedom making your films now that your name is the selling point?
I have complete freedom but that is, in itself, a handicap. One enters the world of financial ethics. One can do whatever one wants but you become restrained by a kind of responsibility. In the case of Suspicion, one of the early films you mention with Cary Grant, he should never have been in the picture in the first place. You run into this problem. You cast a man who is suspected of murder and then you have to compromise. I remember the head of RKO returned from New York and said, with a big grin on his face, “Oh, you should see what’s been done to your film Suspicion.” I said, “What?” He said, “Wait and see.” It was now only 55 minutes long. They had gone through the film in my absence and taken out every scene that indicated the possibility that Cary Grant was a murderer. So there was no film existing at all. That was ridiculous. Nevertheless, I had to compromise on the end. What I wanted to do was that the wife was aware that she was going to be murdered by her husband, so she wrote a letter to her mother saying that she was very much in love with him, she didn’t want live anymore, she was going to be killed but society should be protected. She therefore brings up this fatal glass of milk, drinks it and before she does she says, “Will you mail this letter to mother?” Then she drinks the milk and dies. You then have just one final scene of a cheerful Cary Grant going to the mailbox and posting the letter. But this was never permitted because of the basic error in casting. —Alfred Hitchcock at the National Film Theatre

This brings us to Suspicion, and you might cover a point we skipped. In our talks about Rebecca I forgot to ask your opinion of Joan Fontaine. I believe she was an important actress to you.
Well, in the preparatory stages of Re­becca, Selznick insisted on testing every woman in town, known or unknown, for the lead in the picture. I think he really was trying to repeat the same publicity stunt he pulled in the search for Scarlett O’Hara. He talked all the big stars in town into doing tests for Rebecca. I found it a little embarrassing, myself, testing women who I knew in advance were unsuitable for the part. All the more so since the earlier tests of Joan Fontaine had con­vinced me that she was the nearest one to our heroine. In the early stages of the actual shooting, I felt that Joan Fontaine was a little self­ conscious, but I could see her potential for re­strained acting and I felt she could play the character in a quiet, shy manner. At the outset she tended to overdo the shyness, but I felt she would work out all right, and once we got going, she did.

In the sense of her physical frailty, she’s quite unlike Ingrid Bergman and Crace Kelly.
I think so, too. You might say Suspi­cion was the second English picture I made in Hollywood: the actors, the atmosphere, and the novel on which it’s based were all British. The screenwriter was Samson Raphaelson, who’d worked on the early talking pictures of Ernst Lubitsch.

And with him, the family brain trust, Alma Reville and Joan Harrison.
The original novel was ‘Before the Fact,’ and the author’s—Francis Iles’—real name was A. B. Cox. He sometimes also wrote under the pen name of Anthony Berkeley. I’ve often wanted to film his first novel, Malice Afore­ thought. The book opens with the sentence: “It was not until several weeks after he had decided to murder his wife that Dr. Bickleigh took any active steps in the matter.” The reason I didn’t do it is that it requires a mature man in the part. It’s hard to find the right actor, perhaps Alec Guinness. 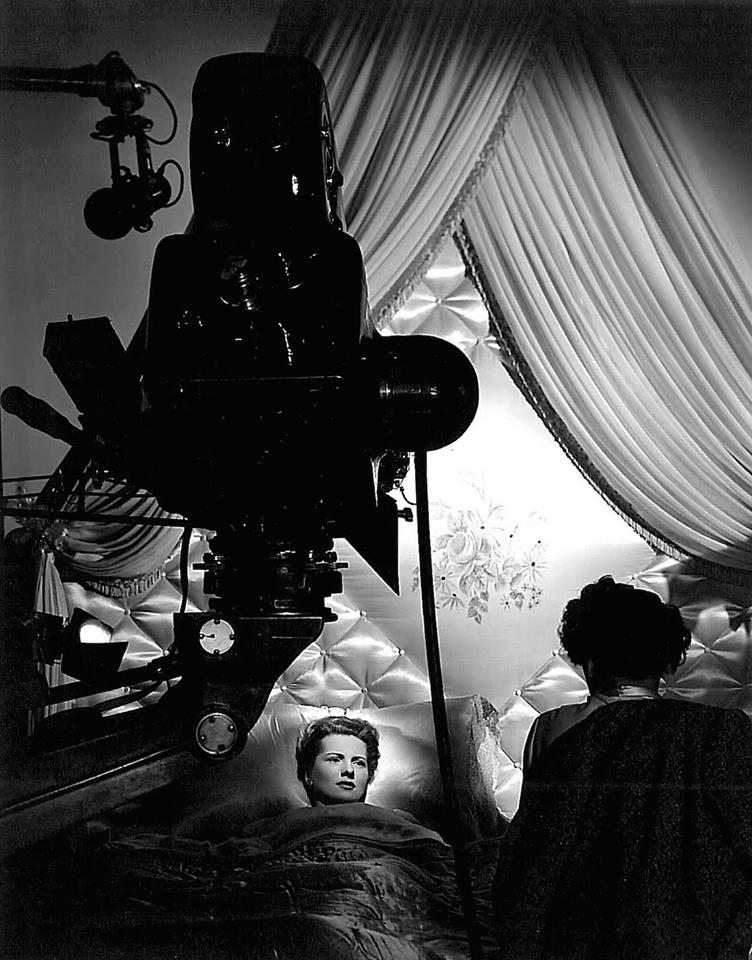 Some of the critics who’d read ‘Before the Fact’ reproach you with having changed the whole thing. The novel is the story of a woman who gradually realizes that she’s married a mur­derer and is so much in love that she finally allows herself to be killed by him. Your picture is about a woman who, upon discovering that her husband is indifferent, a liar, and a spend­ thrift to boot, begins to imagine he’s a killer as well, and suspects him-though, in fact, subse­quent events will prove she’s wrong-of want­ing to murder her. In our discussions about The Lodger, you re­ferred to Suspicion and said that the producers would have objected to Cary Grant being the killer. If I understood you correctly, you’d have preferred that he be the guilty one.
Well, I’m not too pleased with the way Suspicion ends. I had something else in mind. The scene I wanted, but it was never shot, was for Cary Grant to bring her a glass of milk that’s been poisoned and Joan Fontaine has just fin­ished a letter to her mother: “Dear mother, I’m desperately in love with him, but I don’t want to live because he’s a killer. Though I’d rather die, I think society should be protected from him.” Then, Cary Grant comes in with the fatal glass and she says, “Will you mail this letter to Mother for me, dear?” She drinks the milk and dies. Fade out and fade in on one short shot: Cary Grant, whistling cheerfully, walks over to the mailbox and pops the letter in.

That would have been a great twist. I’ve read the novel and I liked it, but the screen­play’s just as good. It is not a compromise; it’s actually a different story. The film version, showing a woman who believes her husband is a killer, is less farfetched than the novel, which is about a woman who accepts the fact that her husband is a murderer. It seems to me that the film, in terms of its psychological values, has an edge over the novel because it allows for subtler nuances in the characterizations. One might even say that Hollywood’s unwritten Iaws and taboos helped to purify Suspicion by dedramatizing it, in contrast with routine screen adaptations, which tend to magnify the melodramatic elements. I’m not saying that the picture is superior to the novel, but I do feel that a novel that followed the story line of your screenplay might have made a better book than ‘Before the Fact.’
That mayor may not be; I can’t say, but I do know that I ran into lots of difficulties on that picture. When it was finished, I spent two weeks in ew York, and had quite a shock when I came back. One of RKO’s producers had screened the picture, and he found that many of the scenes gave the impression that Cary Grant was a killer. So he simply went ahead and ordered that all of these indications be deleted; the cut version only ran fifty-five minutes. For­tunately, the head of RKO realized that the re­sult was ludicrous, and they allowed me to put the whole thing back together again.

Aside from that, are you satisfied with Suspicion?
Up to a point. The elegant sitting rooms, the grand staircases, the lavish bed­ rooms, and so forth, those were the elements that displeased me. We came up against the same problem we had with Rebecca, an English setting laid in America. For a story of that kind, I wanted authentic location shots. Another weakness is that the photography was too glossy. By the way, did you like the scene with the glass of milk?

When Cary Grant takes it upstairs? Yes, it was very good.
I put a light in the milk.

You mean a spotlight on it?
No, I put a light right inside the glass because I wanted it to be luminous. Cary Grant’s walking up the stairs and everyone’s at­tention had to be focused on that glass.

Well, that’s just the way it worked out.
It was a very effective touch.

There’s also a gem of a vintage interview with Hitchcock from 1973 where he talks about his philosophy on filmmaking, Antaeus, 17 pages [PDF].

Here’s another fascinating compilation of photographs taken behind-the-scenes during production of Alfred Hitchcock’s Suspicion © RKO Radio Pictures. Intended for editorial use only. All material for educational and noncommercial purposes only. 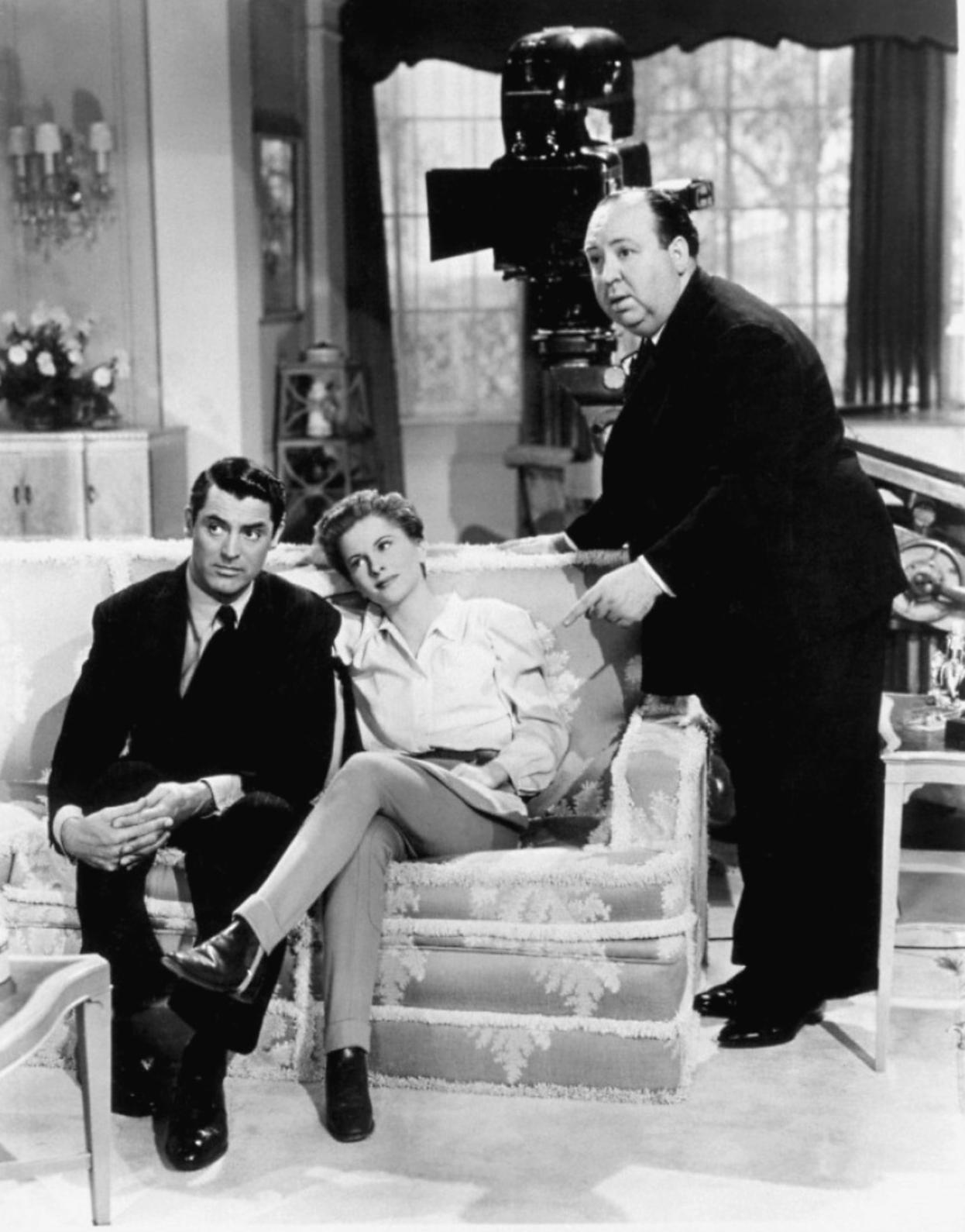 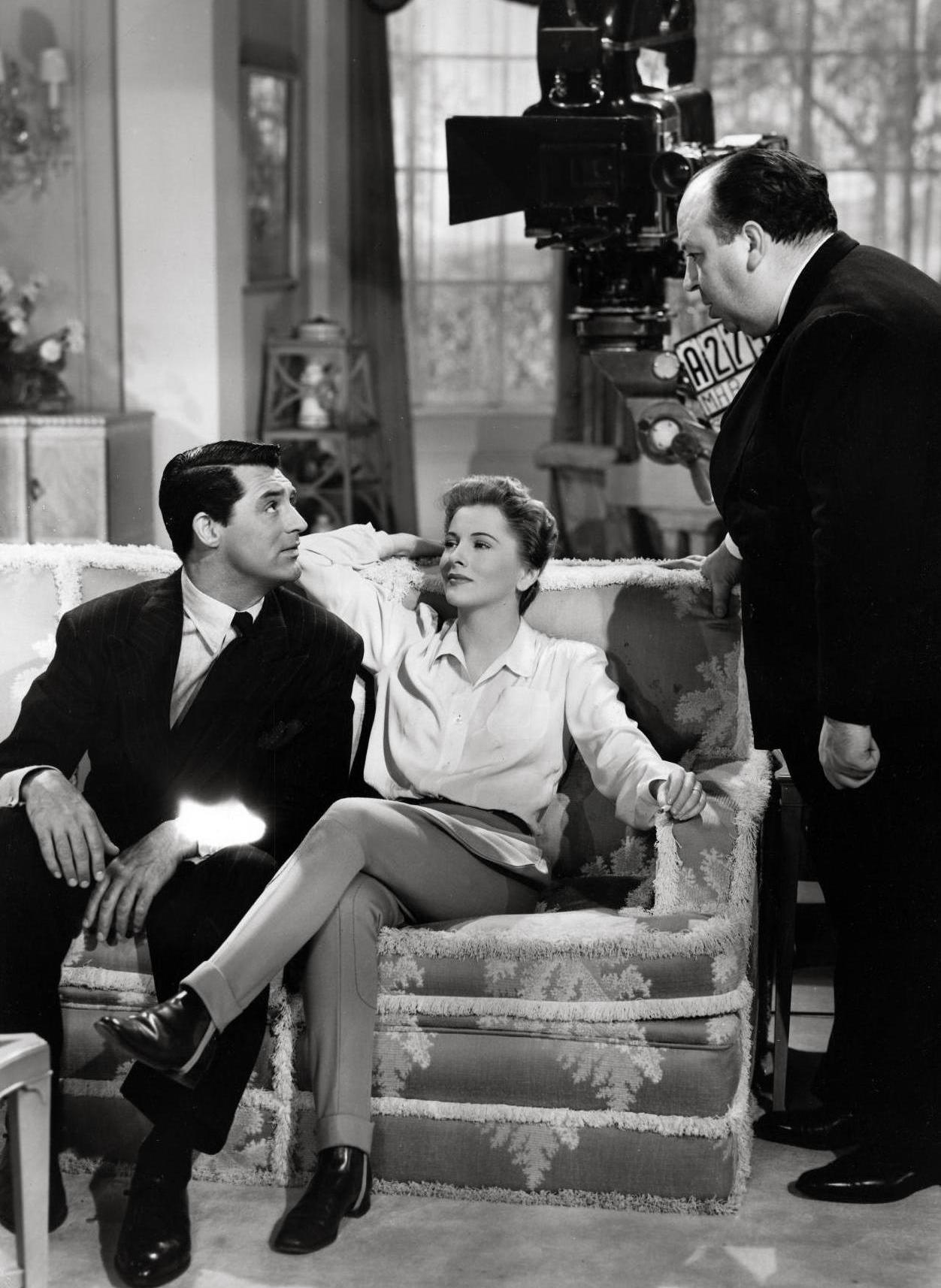 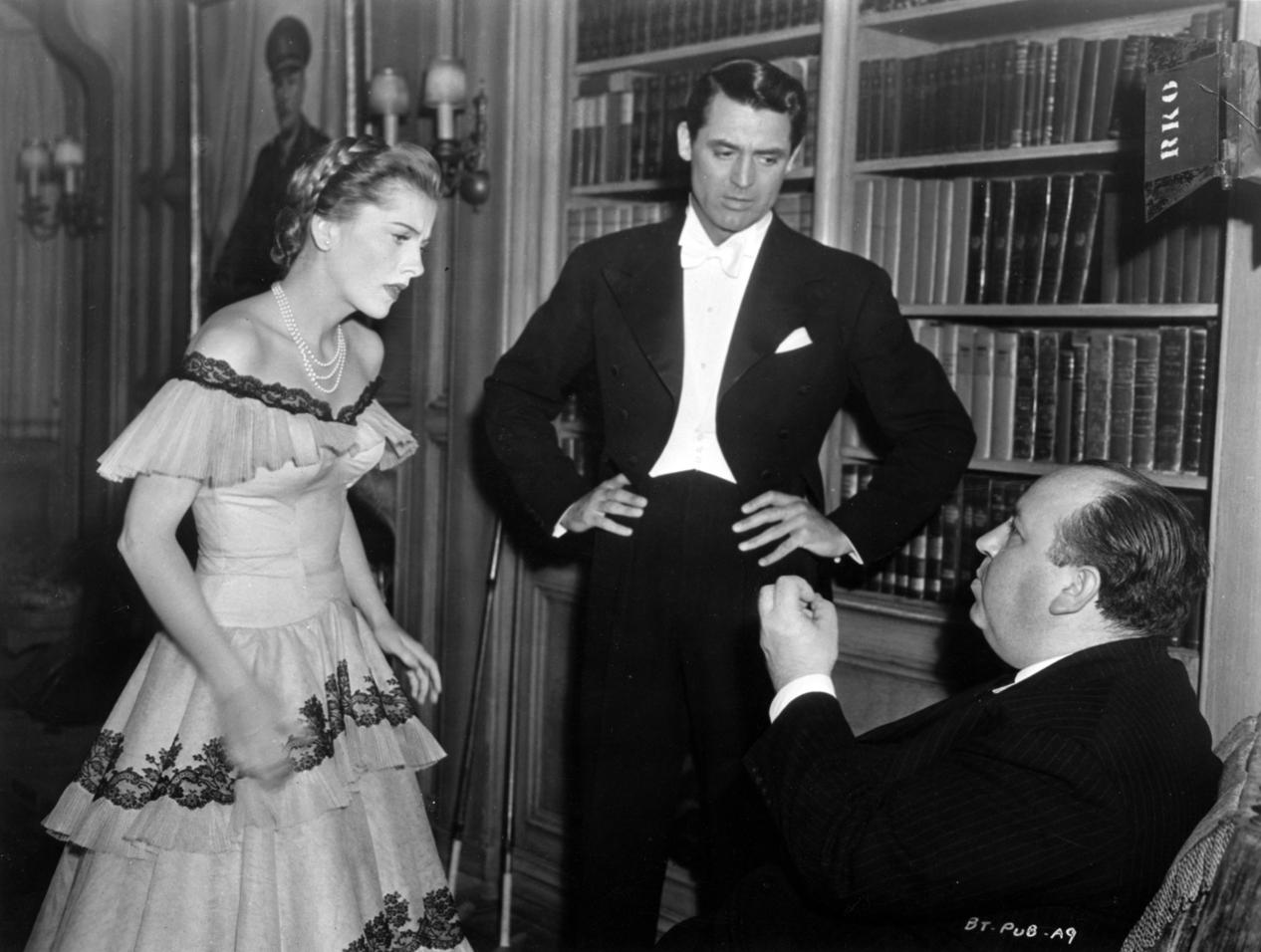 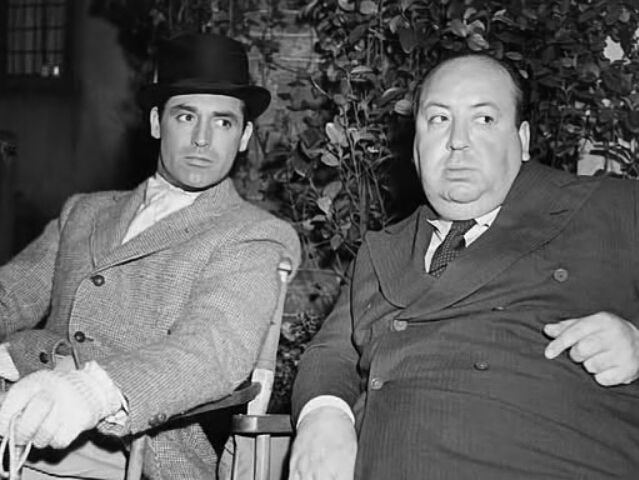 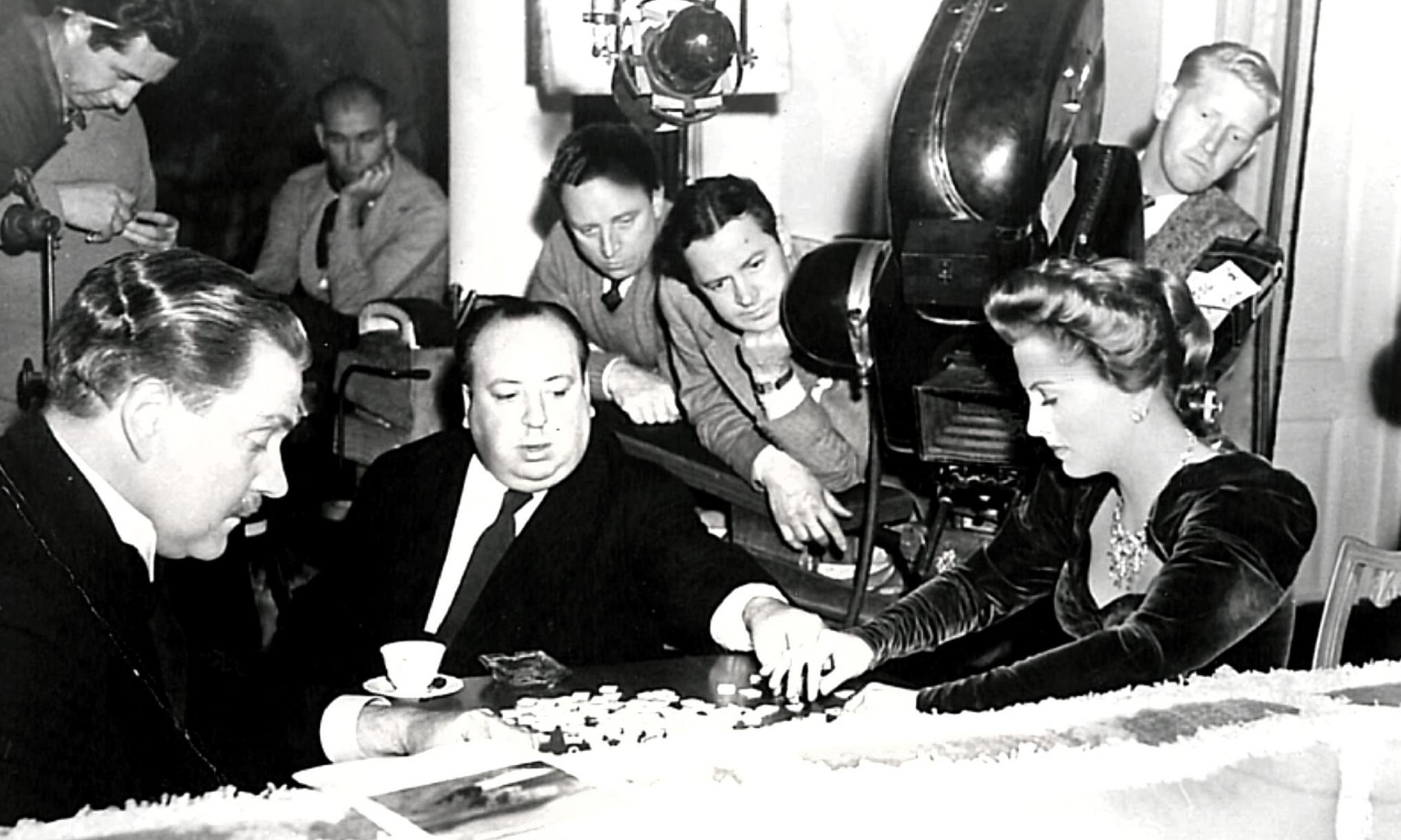 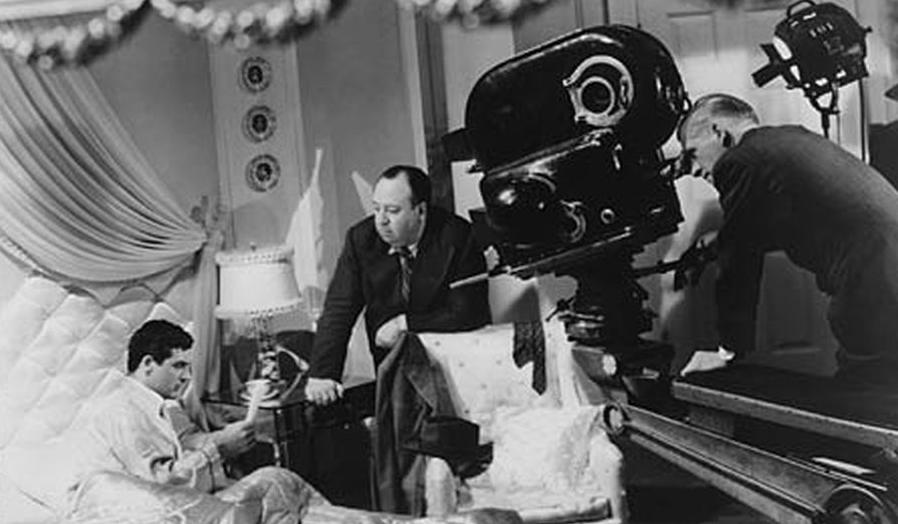 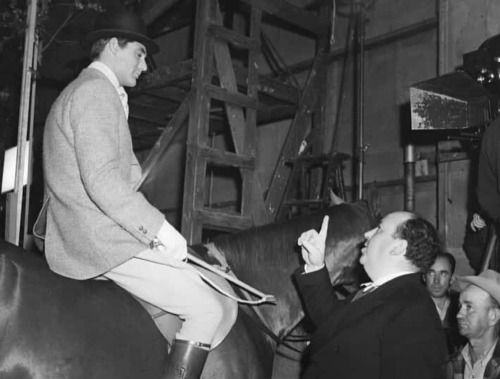 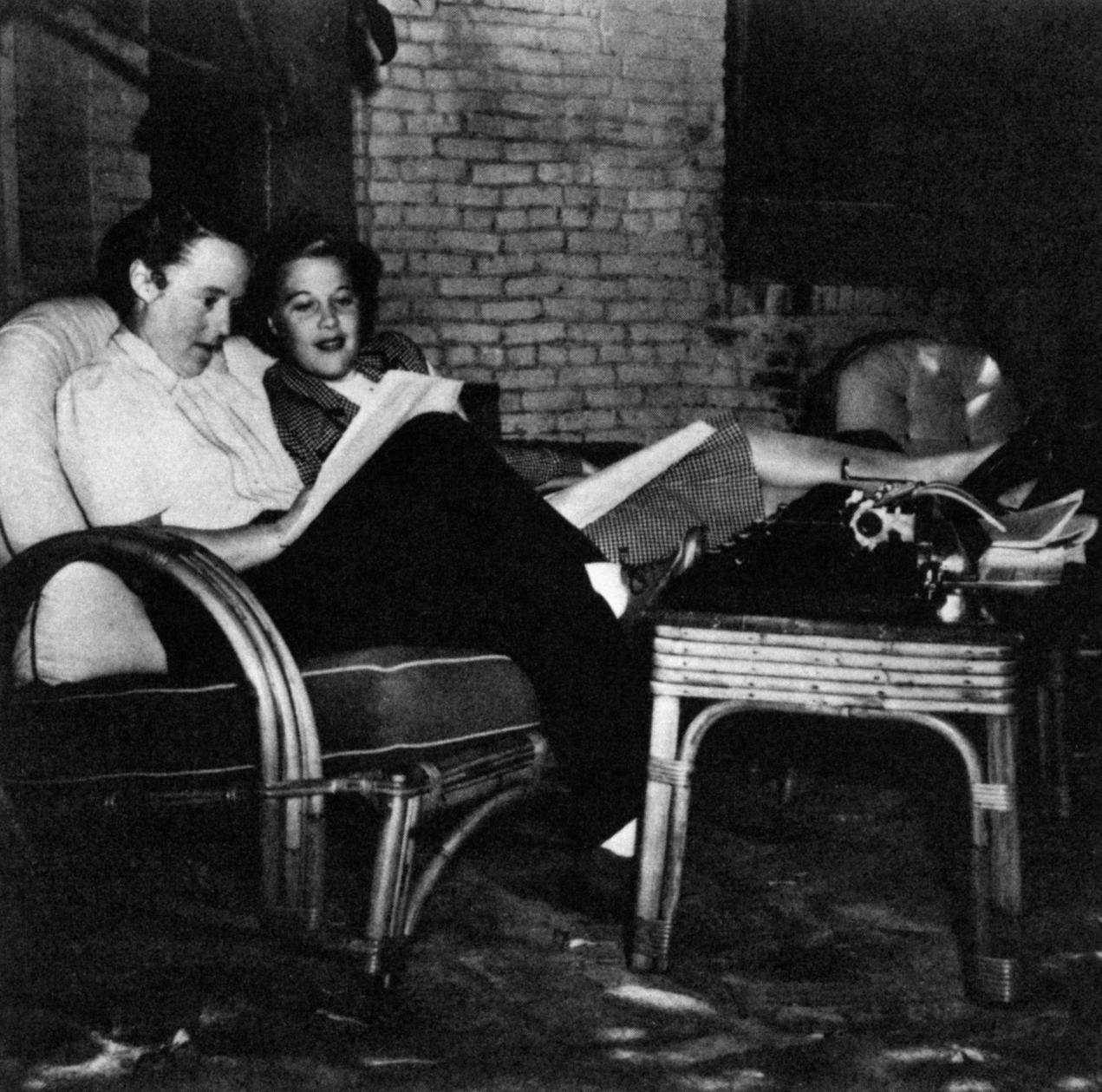 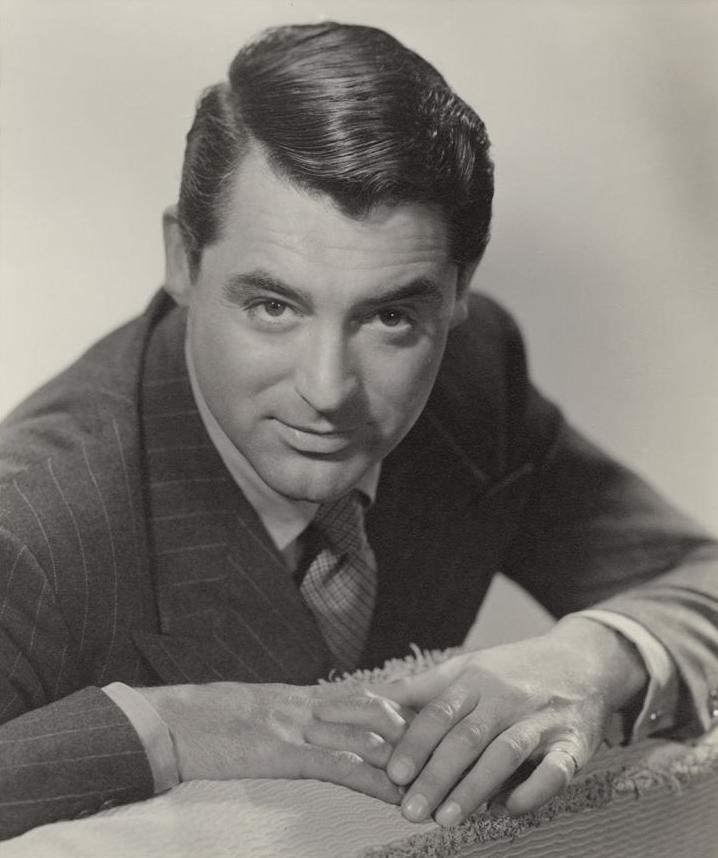 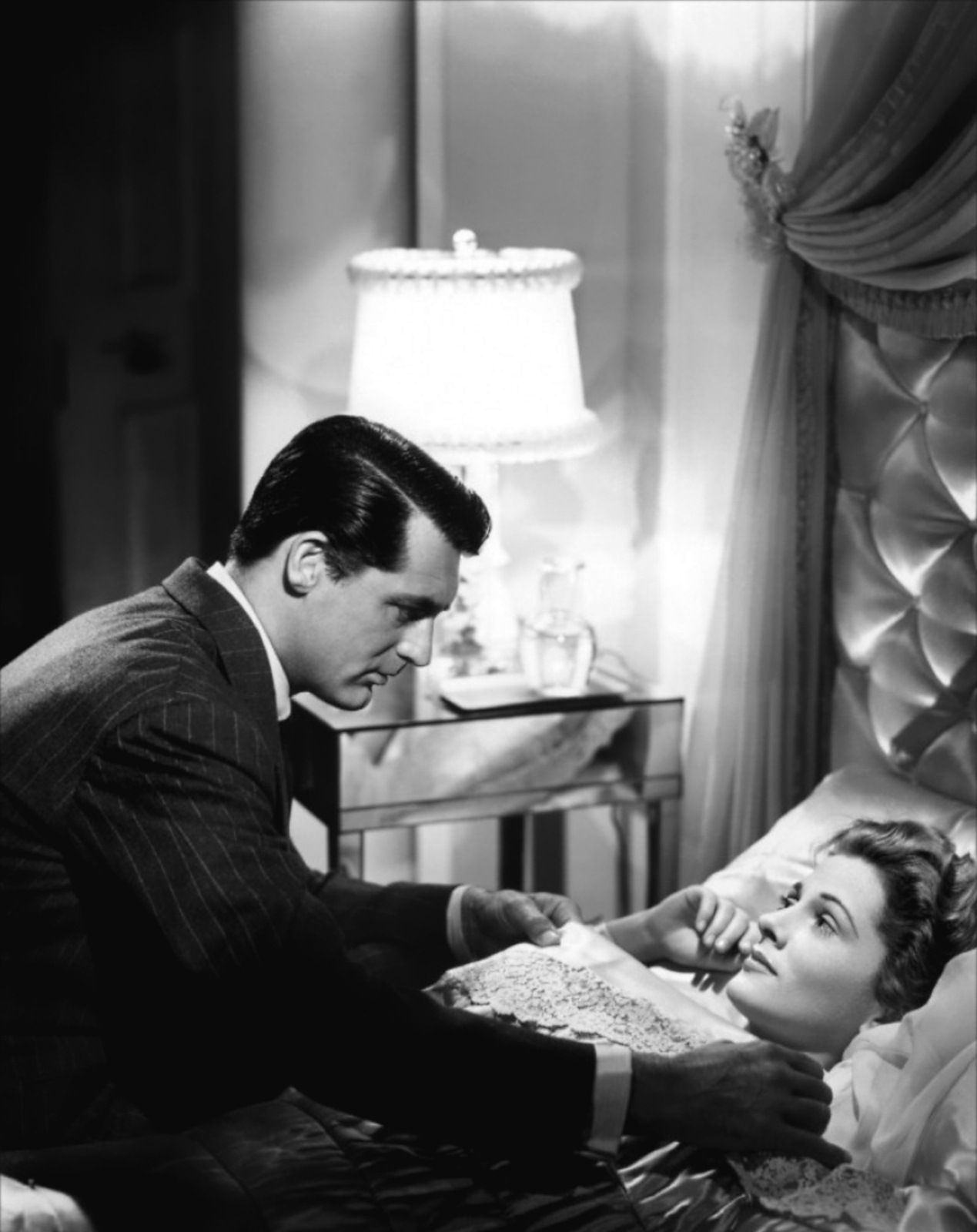 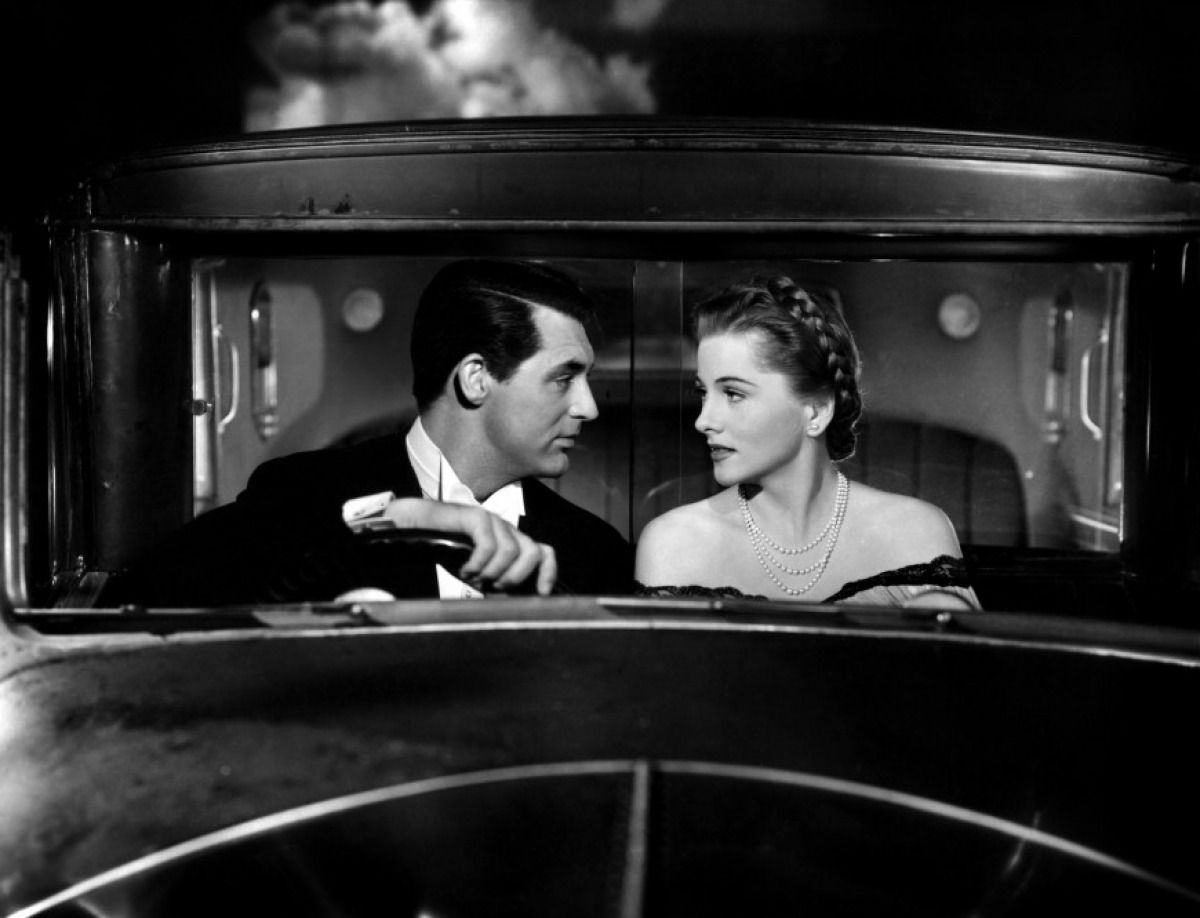 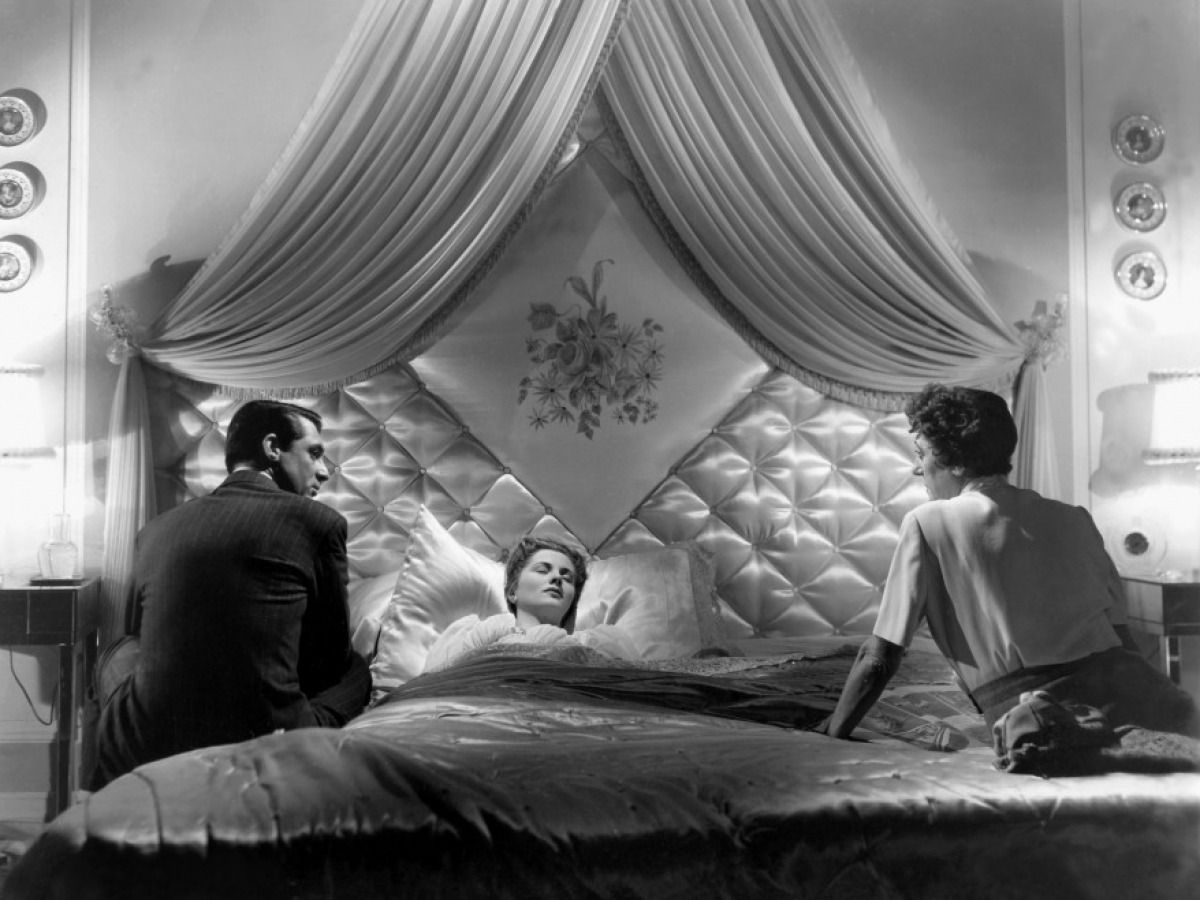 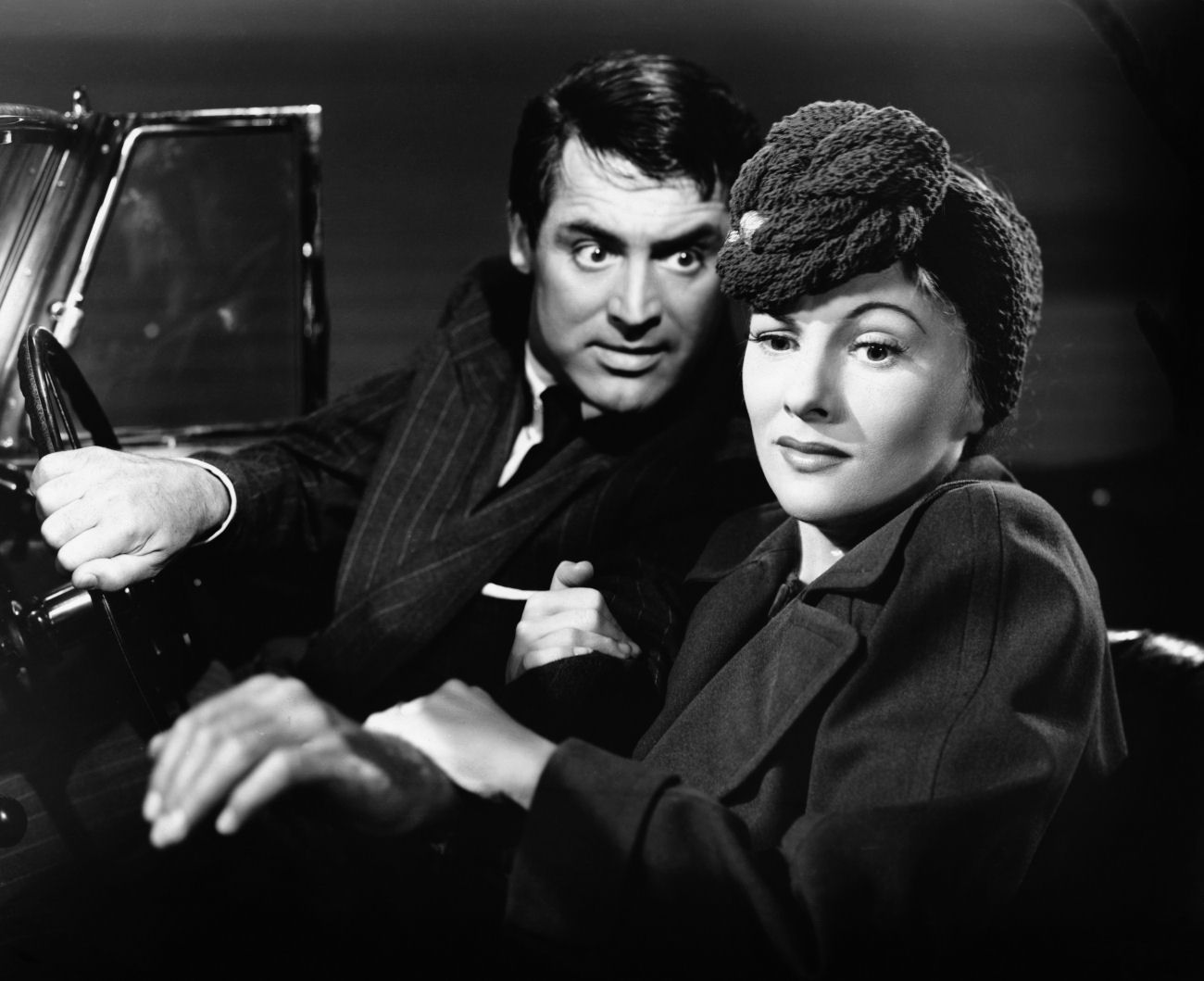