Here’s the screenplay for Alex Cox’s cult classic Repo Man, courtesy of the man himself: “I wrote this script for Jonathan Wacks and Peter McCarthy. There were fourteen different drafts. It was originally about WMD/nuclear terrorism, ending with a Neutron Bomb either 1) blowing up in downtown LA or 2) being sold to rebels in Latin America. Near the end of the shoot, Wacks and Martin Turner, who was our stills photographer, invented an alternative, upbeat, like, spiritual ending. Many of Harry Dean Stanton’s dialogues came from the mouth of a real repo man, Mark Lewis. The characters of Otto and Duke, and the punk milieu, came from a script by Dick Rude and Brandt Reiter, Rubber Leathernecks. The .pdf version is accompanied by contemporary materials including a four-page cartoon featuring the characters of Otto, Bud, and the Rodriguez Brothers, and a copy of Edge City Productions’ original REPO MAN investment portfolio—we were trying to get ten Marina Del Rey dentists to put up the budget, $70,000.” —Alex Cox

Alex Cox is cinema’s great wayward genius who has continued to make films against the odds and on ever decreasing budgets. After Repo Man (1984) came his flawed punk biopic on Sid and Nancy (1986), which owed more to Cox’s imagination than fact. But let’s be fair, it’s Cox’s imagination that makes his films so interesting, even when it is demented, as was seen in his 1987 romp, Straight to Hell, which starred Dennis Hopper, Shane MacGowan, Elvis Costello, The Clash and Courtney Love in what was really a semi-autobiographical home movie as comic Spaghetti Western. The film was hated, but not quite as much as his next, the politically weighted Walker (1987), which paralleled the America’s involvement in Nicaragua in the 1800s with American foreign policy in the 1980s. Denounced by critics and politicians, Walker finished Cox’s Hollywood career—a damn shame, as it is Cox’s masterpiece, a brilliant piece of cinema, that exhibits the kind of intelligence, humor and political filmmaking Tinsel Town desperately needs. —Dangerous Minds 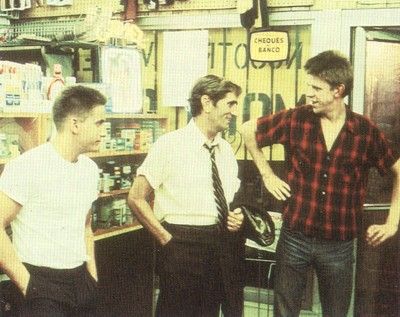 Edge City, a/k/a Sleep Is for Sissies, is director Alex Cox’s first movie. Made for $8,000 while Cox was a student at UCLA, the 36-minute picture already includes a number of the distinguishing features of his works. That means a repo man, a Chevy Malibu, and Ed Pansullo; references to Nicaragua and Sid Vicious; class exploitation, absurd violence, and creative sound editing. As usual, characters work at cross-purposes and don’t listen to each other. Jokes are reminiscent of Harvey Kurtzman-era MAD comics. —Dangerous Minds